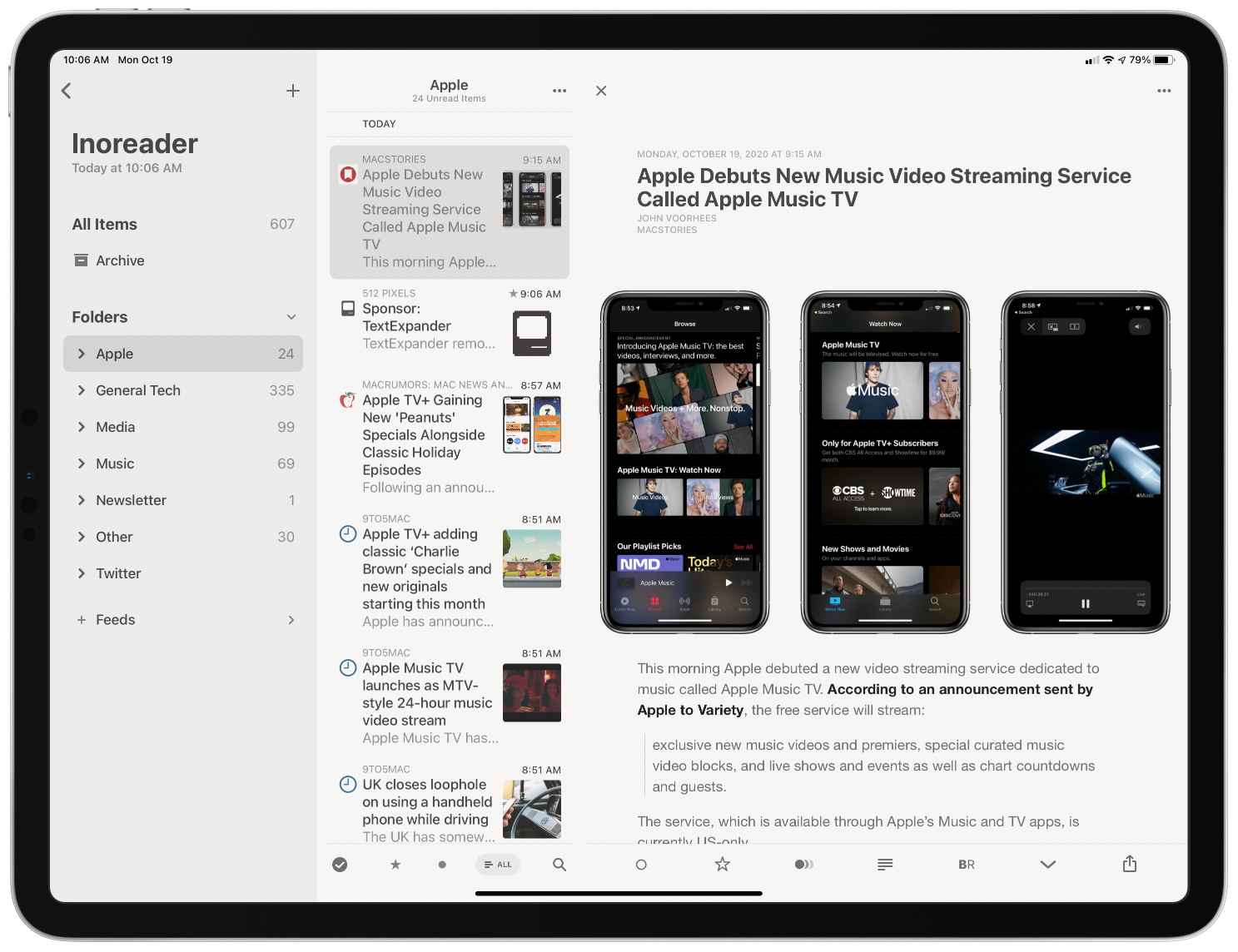 Last year we named RSS client Reeder 4 the Best App Update as part of the MacStories Selects awards for a good reason. Reeder has been one of the best-designed RSS apps available for a very long time. With the release of version 4, developer Silvio Rizzi rebuilt the app on a modern foundation from the ground up. Roughly one year later, version 5 is out as a brand new app that takes what Rizzi began last year and extends it further with a host of excellent new features and design refinements.

One of my favorite features debuted in version 4 of Reeder is its Read Later service. Read-it-later services are nothing new. However, having one built into an RSS client was an unexpected pleasure. Stories can be sent to Reeder’s Read Later service from the RSS feeds you subscribe to or from other apps by using Reeder’s share extension. The combination of items pulled from RSS and pushed from the web using the share extension is a powerful mix, making it possible for Reeder to become the main hub for your web reading. 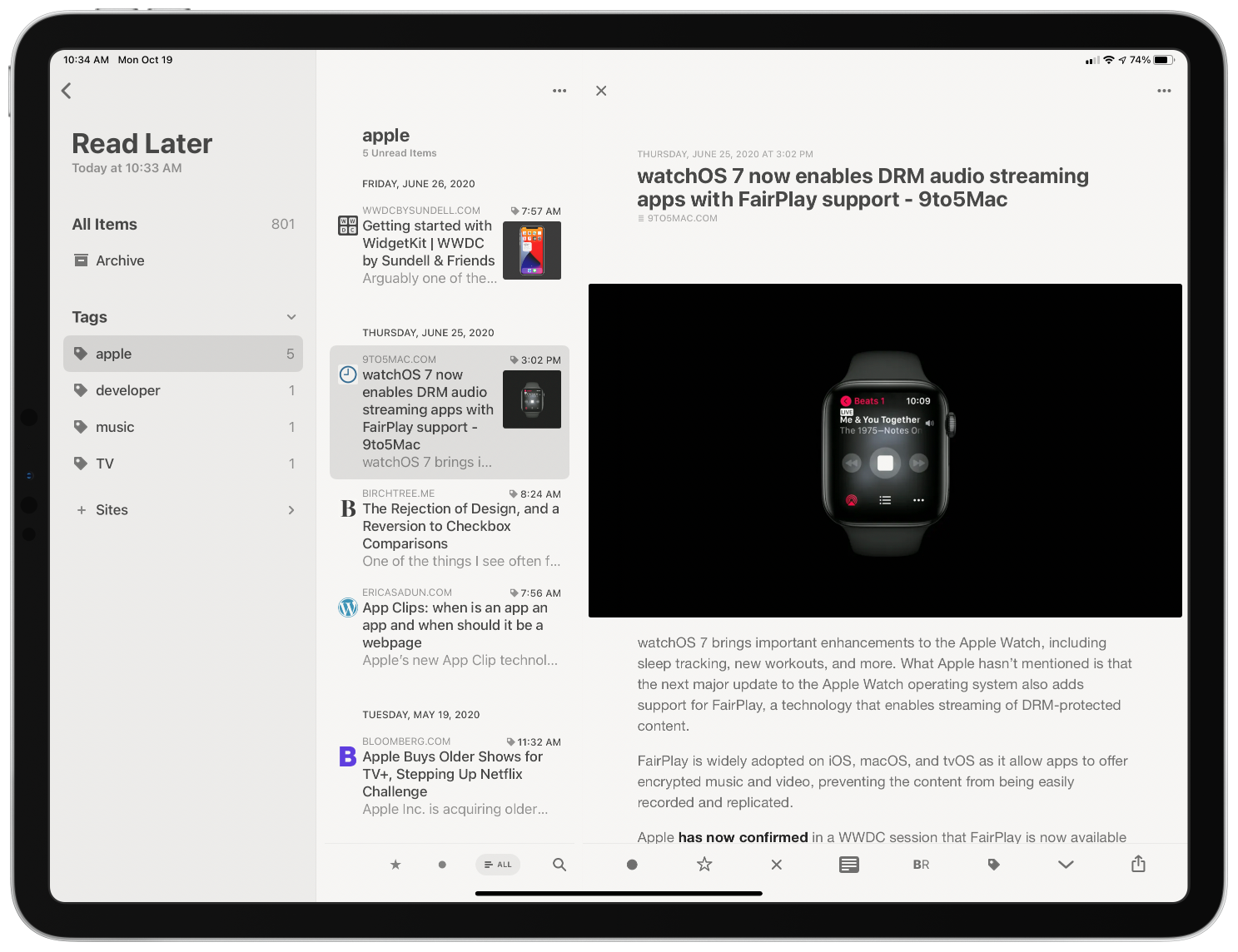 The biggest drawback of Reeder’s Read Later service in version 4 was the limited organization options. Items were organized by website only. With version 5, Rizzi added the ability to tag Read Later items too. By assigning multiple tags to a single item, users can organize links by topic, project, or other criteria. It’s a significant improvement that makes the app competitive with dedicated bookmark organizers like GoodLinks.

Links saved in Read Later continue to be accessible using Shortcuts. However, version 5 adds a new ‘Get Read Later Tags’ action for retrieving a list of the tags you use. The ‘Get Items from Read Later’ action has added a tag filter, too, so you can retrieve just those items associated with a particular tag. Coupled with browsing tags with Reeder, the new shortcut actions open up a wide variety of options for organizing and processing saved links. 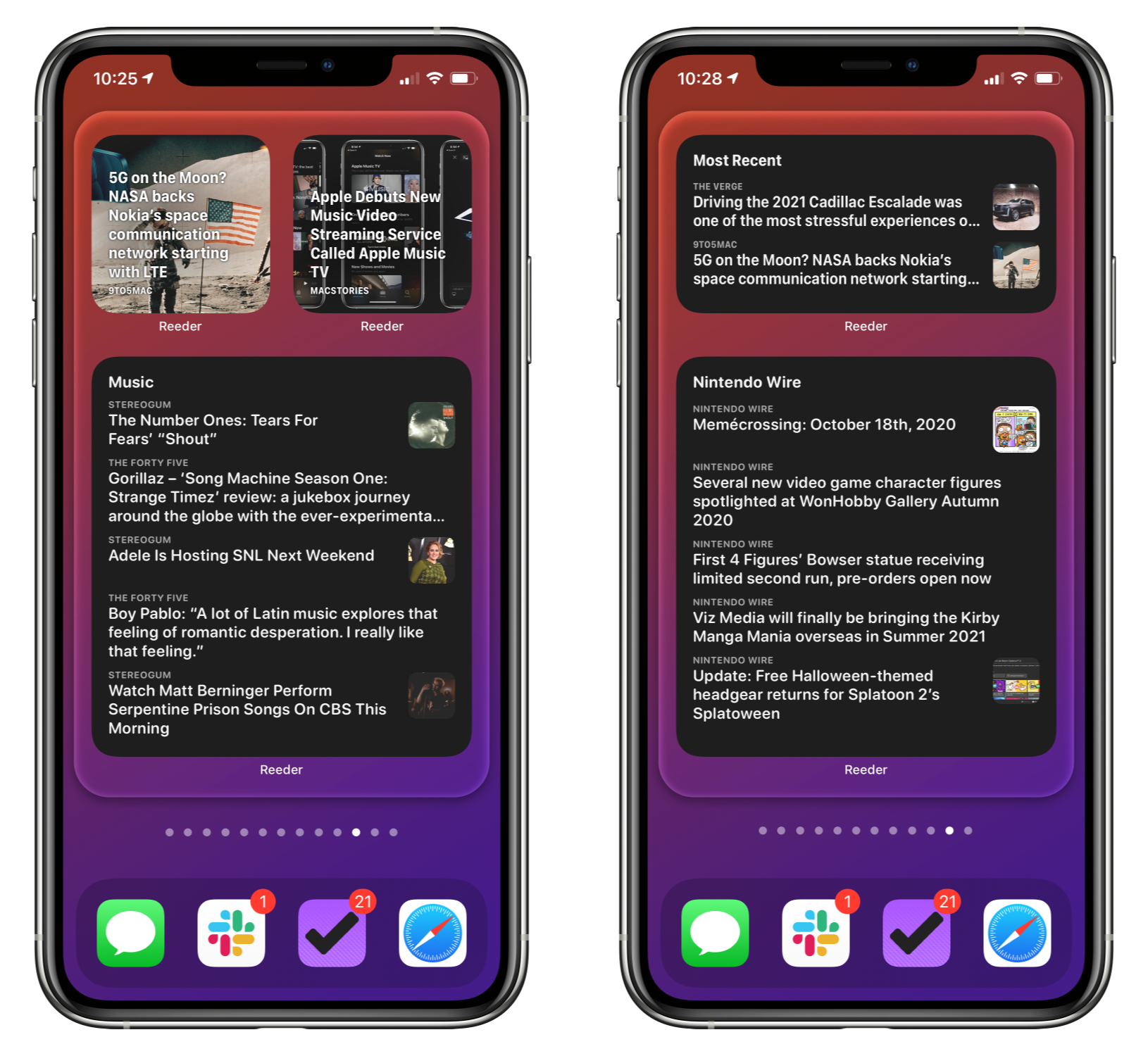 The iPhone and iPad versions of Reeder have added widget support too. The app’s Recent Articles widget comes in small, medium, and large sizes and can be configured to display articles from any source set up in the app, including the app’s built-in Read Later service and any RSS service. Folders and feeds associated with an RSS service and the tag associated with the Read Later service can serve as widget sources too. In a nice touch, there’s a search field in the widget configuration view to make it easier to find the source you want. Reeder’s widgets can also be displayed using four fonts: System, Rounded, Serif, and Compact.

The larger the widget you pick, the more articles it can display, but even with the large widget, you are limited to at most five articles, which is why the ability to pick a source is so important. That way, you can pick a site, folder, or tag you care about most to use with a widget or create a stack of the sources most important to you. One small thing I’d like to see added to the widgets is the ability to use the domain associated with articles stored in Read Later as a filter too. 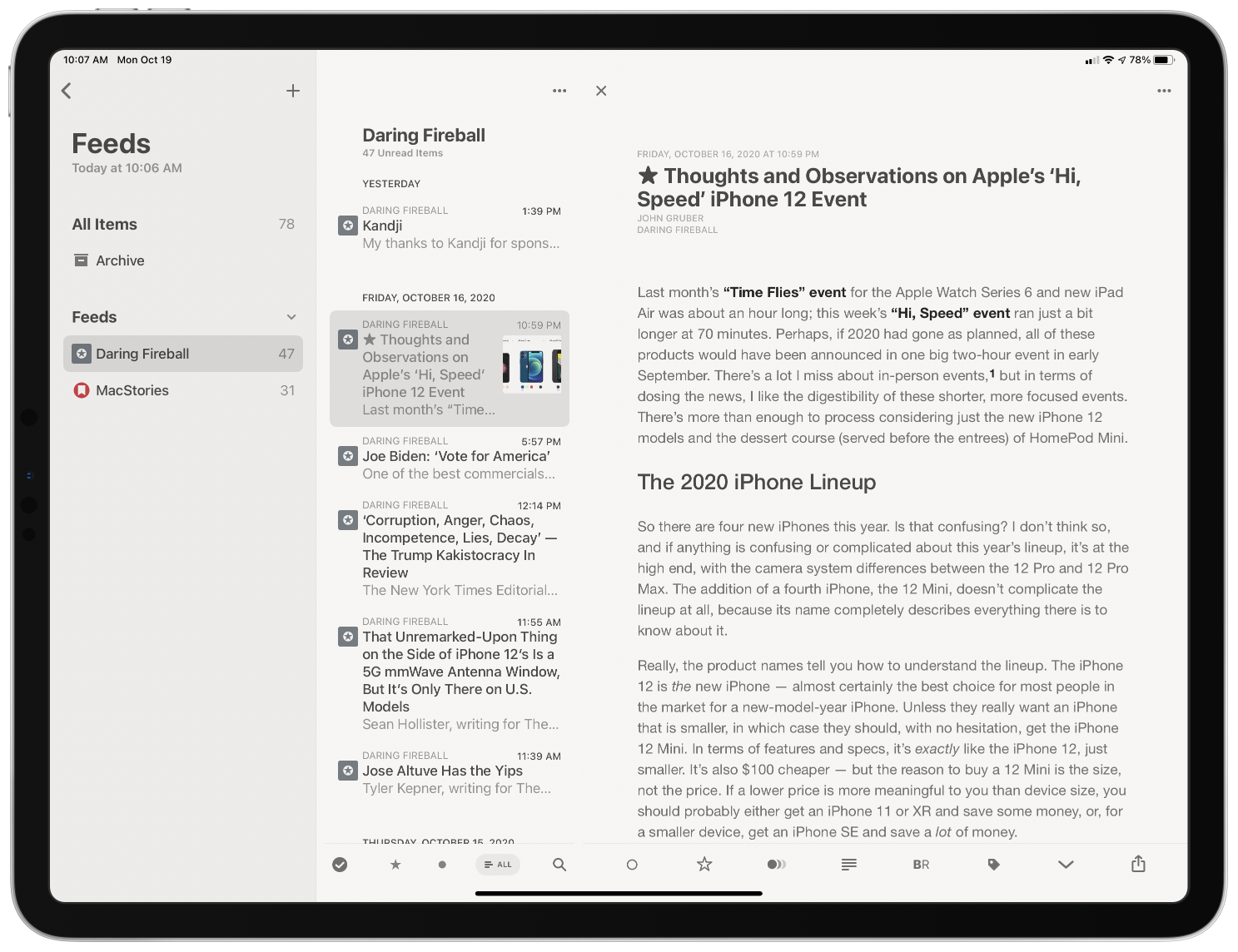 Earlier versions of Reeder allowed users to sync feeds across multiple devices using a third-party sync service like Inoreader, Feedly, Feedbin, and several others. That’s still the case with version 5, and the variety of services available is one of the app’s greatest strengths, but now, you also have the option to sync feeds among devices with iCloud sync. The new option has the advantage of being free, but you lose the ability to keep different RSS apps in sync across multiple devices and any additional features some third-party services offer. However, if you use Reeder everywhere and don’t care about the extra features available with third-party services, Reeder’s iCloud sync is a fantastic option.

When you set up iCloud to sync your feeds, you have the option of syncing iCloud data only. This is an interesting option. If, for example, you have a Mac running at home and syncing your feeds in Reeder automatically over your local network, you could set your iOS devices to only sync iCloud data. That should make syncing faster and use less data because your iPhone won’t be downloading every feed, just the changes. As the app’s settings warn, though, if you turn this setting on for all your devices, none will be able to download new articles. 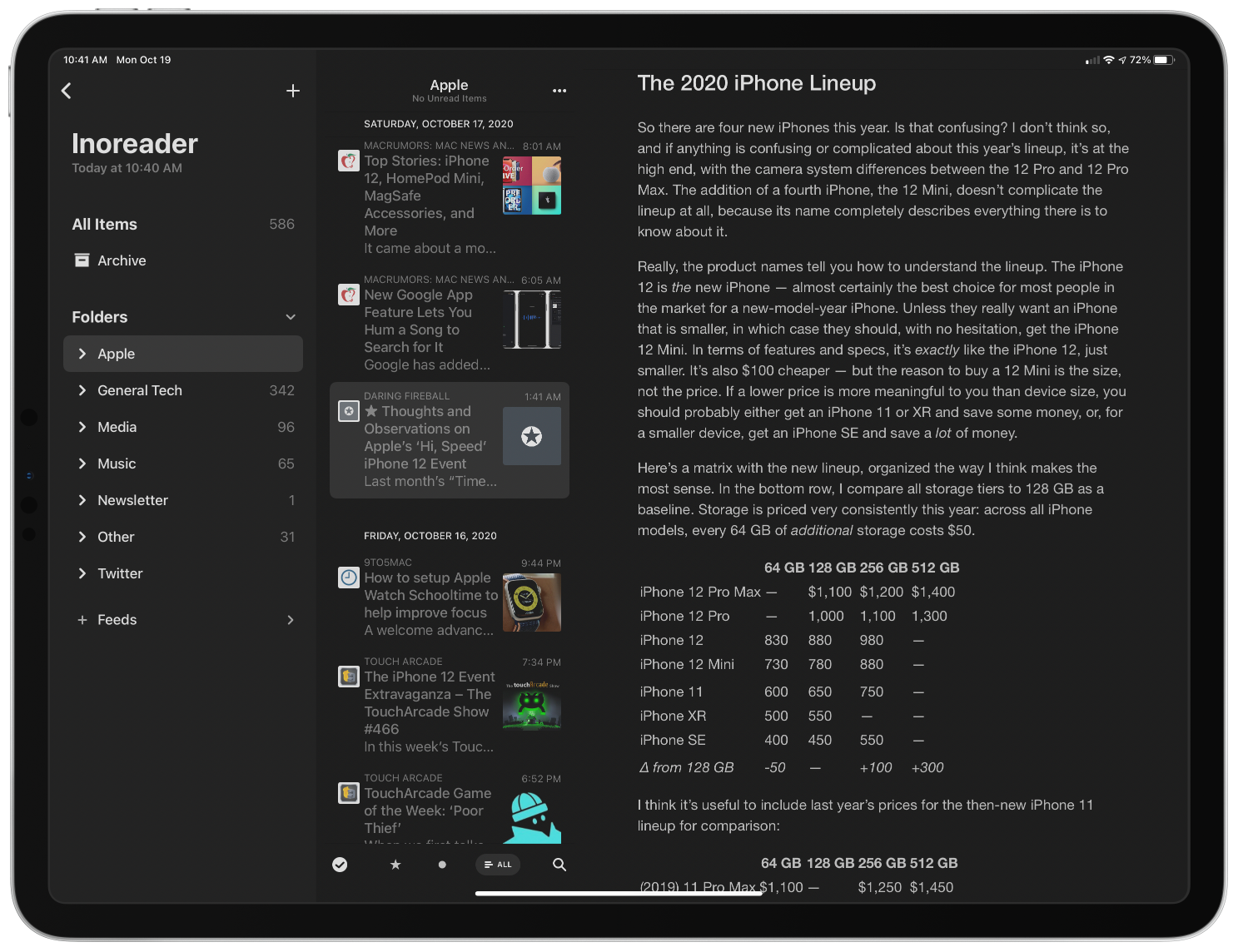 Reeder adds some terrific design changes too. On the iPad, Reeder supports a three-column layout with collapsible sidebar sections. Before, no more than two columns were visible in Reeder when a story was selected. I greatly prefer this new layout. Articles can be browsed from the sidebar by all items, your archive, folders, or feeds. Instead of folders, the sidebar of Reeder’s Read Later service has an option to browse by tags. As someone with a lot of feeds, being able to collapse everything in the sidebar except what I care about is a much better, less cluttered browsing experience than before.

Another nice addition is the option to turn on marking items as read simply by scrolling past them. I scan lots of headlines of articles I don’t read, and with this feature, I no longer need to remember to mark everything above as read before moving on to a different app. It’s a small touch, but one that works extremely well with the way I browse my feeds.

Context menus aren’t new in Reeder, but they offer many more options in Reeder 5. Long-pressing a feed gives users the option to ensure its stories only load the Automatic Reader Version, which is handy for sites that only offer a truncated feed. You can also now unsubscribe from a feed from its context menu and edit it, as was the case in version 4.

There are more context menu options for individual stories too. In addition to marking a story as read or unread, toggling its starred status, or sharing it, you can also mark all items above or below it as read or send it to Reeder’s Read Later service.

Other design tweaks on iOS and iPadOS worth mentioning are the addition of the New York and Helvetica Neue fonts, which are available for the article view. New York is the Apple font that used to be exclusive to the company’s Books app, and a particularly nice option if you like serif fonts. There are also new icon options, including the new cloud version that I like a lot. I also appreciate that the icon picker is a context menu that lets me see more options than before. As for the Mac, Reeder 5 gains the same ability to sync feeds over iCloud, Read Later tagging, collapsible sidebar sections, mark as read as you scroll, and per-feed reader view option. Big Sur isn’t out yet, but hopefully when it is, Reeder 5 for Mac will offer widgets there too. 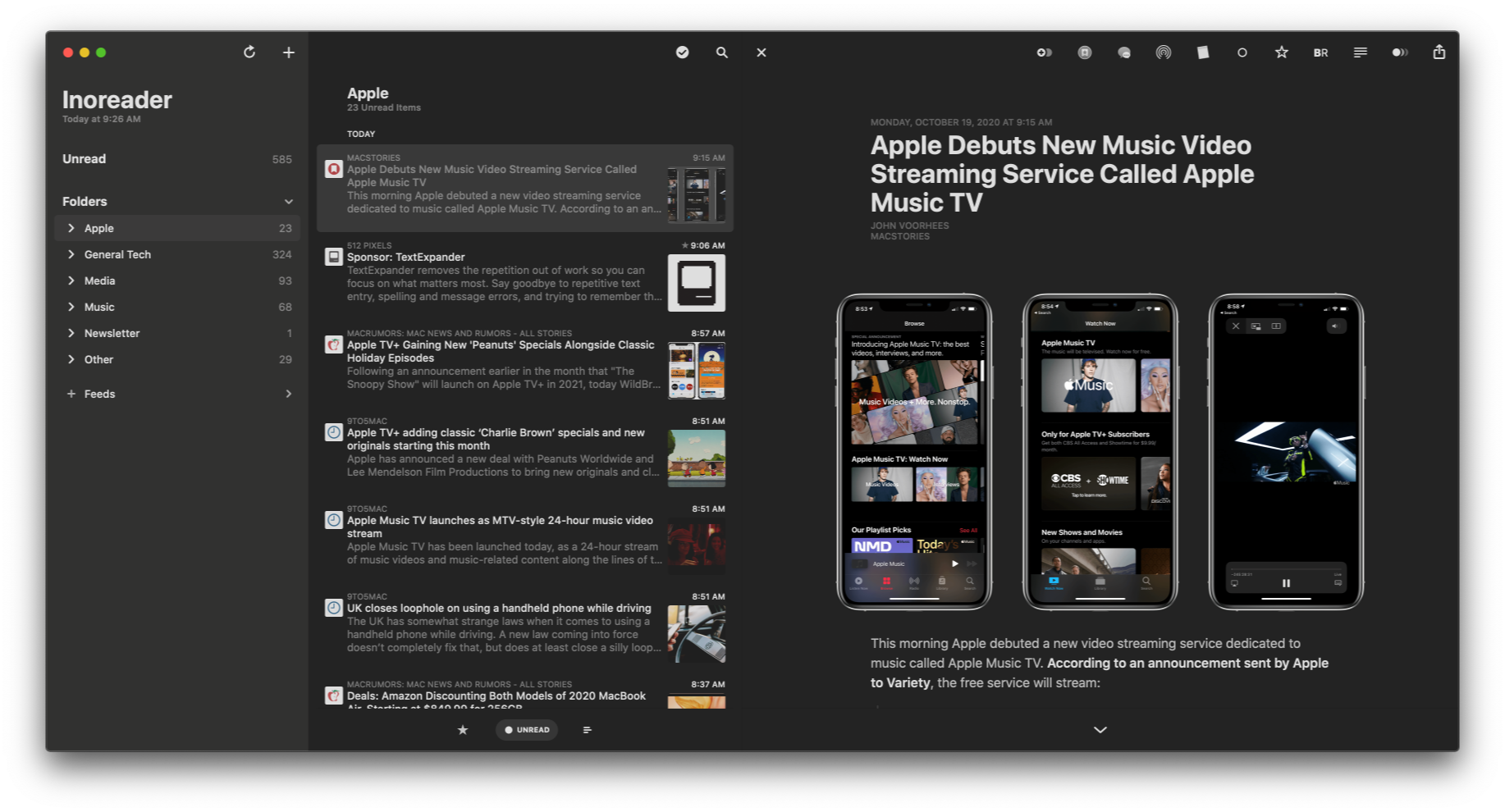 Reeder 5 on the Mac.

I like Reeder’s new iCloud sync feature a lot. It’s not for me because I use too many of Inoreader’s advanced server-side features, but it’s a terrific addition if you don’t need those things. I also appreciate the improvements to the app’s layout on the iPad and the addition of tagging in the Read Later service.

The latest update isn’t as big a leap forward as last year’s introduction of Reeder 4, but it didn’t need to be. Reeder continues to provide one of the very best reading experiences available in any RSS client I’ve tried. Combined with a modern iPad layout, extensive keyboard shortcut support, a long list of ways to sync feeds, and a Read Later service that sets it apart from its competitors, you can’t go wrong with Reeder 5.