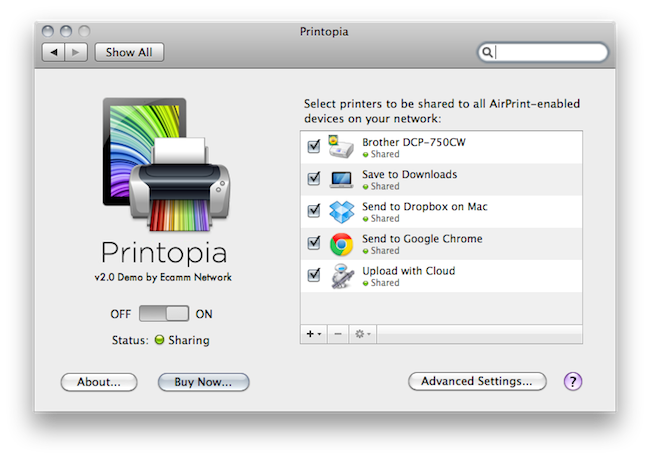 When I first reviewed Printopia by Ecamm back in November, I was impressed by how easily the app allowed me to send documents from an iOS device to a shared printer on OS X via AirPrint. The problem with AirPrint we discussed in November – which Apple hasn’t fixed yet – is that unlike the first betas of OS X 10.6.5 and iOS 4.2, the final versions of these OSes didn’t ship with AirPrint support for shared printers. AirPrint works out of the box with a bunch of HP printers, but Apple promised last year that it would also work with any printer previously configured and shared on a Mac. No need to install additional drivers on iOS: as long as a printer was shared on OS X, it would show up in AirPrint. With 10.6.5 final, that wasn’t the case. AirPrint support for shared printers was pulled at the last minute, and a series of unofficial hacks surfaced to re-enable it without reverting back to a beta of 10.6.5 (Mac OS X has reached version 10.6.7 since then). Among those hacks and apps, Printopia was without the doubt the most elegant one because it provided a GUI in System Preferences to manage shared printers, and allowed you to print a document to a virtual location on your Mac or Dropbox.

Version 2.0 of Printopia, released yesterday, builds on the great virtual printing functionality by adding support for unlimited printers in any location (could be your Downloads folder, the Desktop – you name it) and PDF workflows and applications as well. The feature is more exciting than it sounds on the changelog: with Printopia 2.0, you can send a document from your iOS device (through AirPrint) to any app on your Mac that can preview, say, PDFs. Example: I’m on my iPhone, and I find a PDF I want to read on my computer. Both devices are on the same local network (but it should work with this kind of VPN setup as well), and Printopia is running on my Mac. I take the PDF, and “print it” to Evernote. The document will automatically open in the Evernote app on my desktop. I tested this with Google Chrome, Preview, DEVONthink, Yojimbo, Numbers, Pages – it works really well. But there’s more. Not only you can print to applications, you can also print a document to an Automator workflow that supports the file type. Here’s another example: last night, I sent a PDF document to CloudApp’s own “Upload with Cloud” workflow, and AirPrint sent the document to CloudApp, automatically returning the file’s URL on my desktop.

Printopia 2.0 opens the door to a lot of possibilities for virtually printing documents anywhere on your computer, and of course support for physical shared printers is still there. Printopia 2.0 also introduces support for passwords you can assign to any virtual or real printer and settings for paper size / tray and colors.

If you want to get the most out of AirPrint and you have a Mac, Printopia is the utility to install. With support for real and virtual printers and system-wide integration with apps and Automator, Printopia is a full-featured solution to get any document from iOS on to the desktop. A demo version is available, and a full license can be purchased at $19.95. More screenshots below. 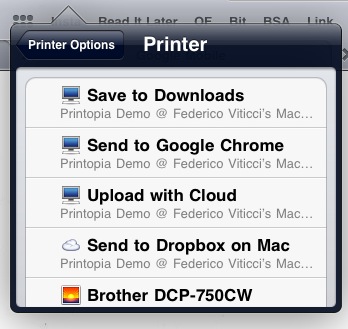 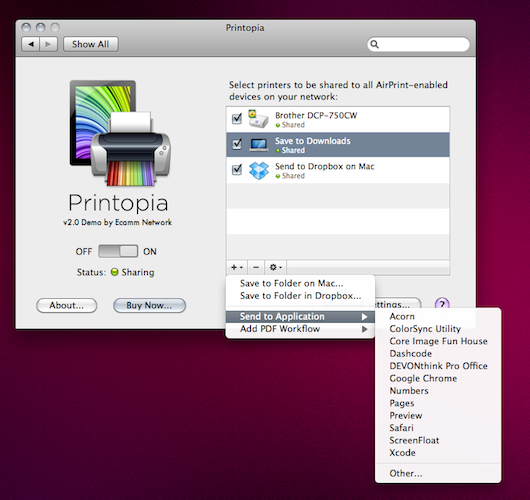