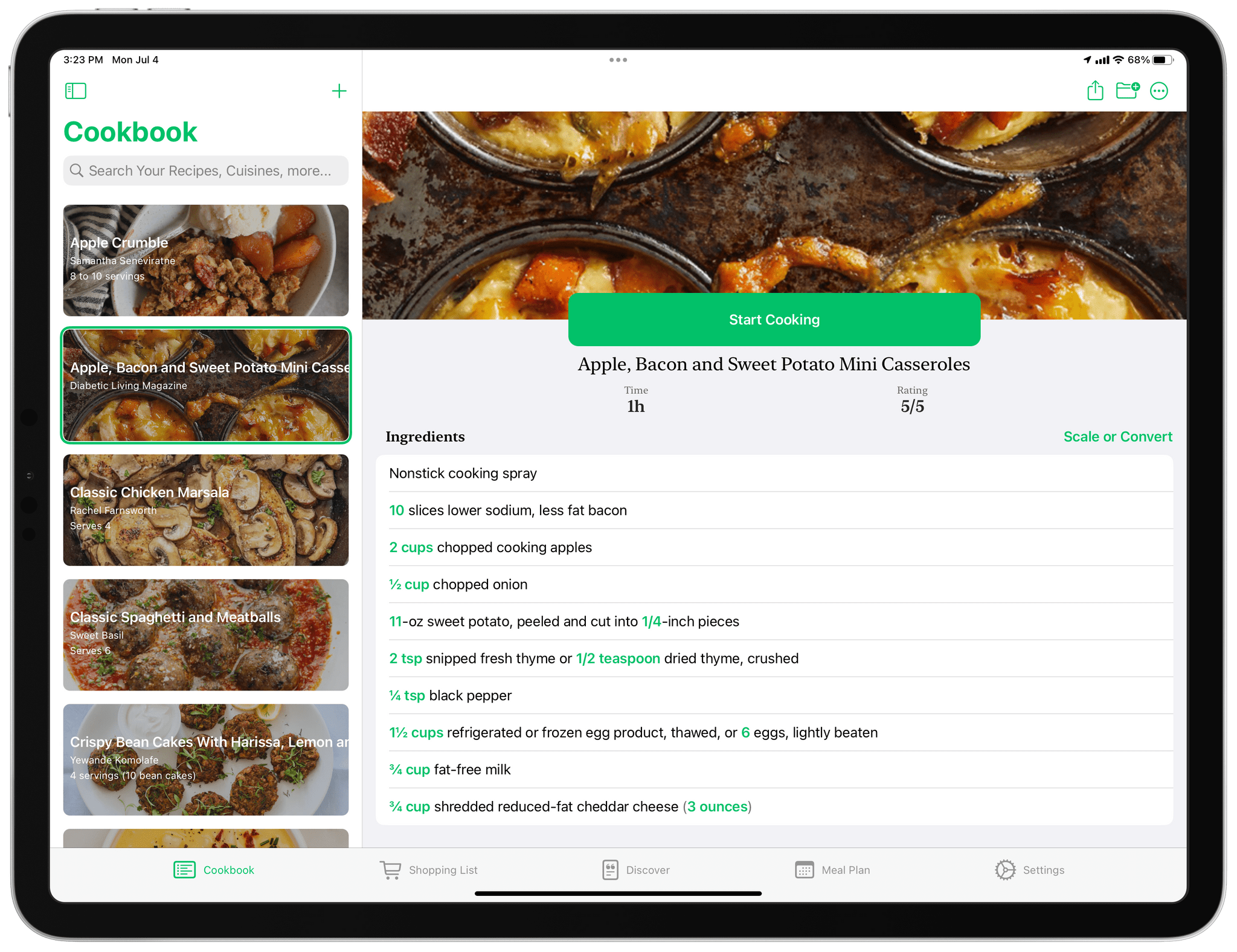 One of the greatest strengths of the App Store is its abundance of choice. For every app category, there are always multiple excellent options from which to pick. That’s never been more true for the recipe app category. Paprika was my long-time personal favorite until Mela came along, but there are other great options like Grocery and Crouton too. Another app that belongs on that list is Pestle, an iPhone and iPad app by Will Bishop.

At its core, Pestle is a recipe manager, but it also integrates with Reminders to create shopping lists, offers a way to discover new dishes, and integrates meal planning, making it a well-rounded solution. The app also features a modern design that works well in the kitchen and some clever details like hands-free voice control for moving between recipe steps while cooking, making it worth a closer look. 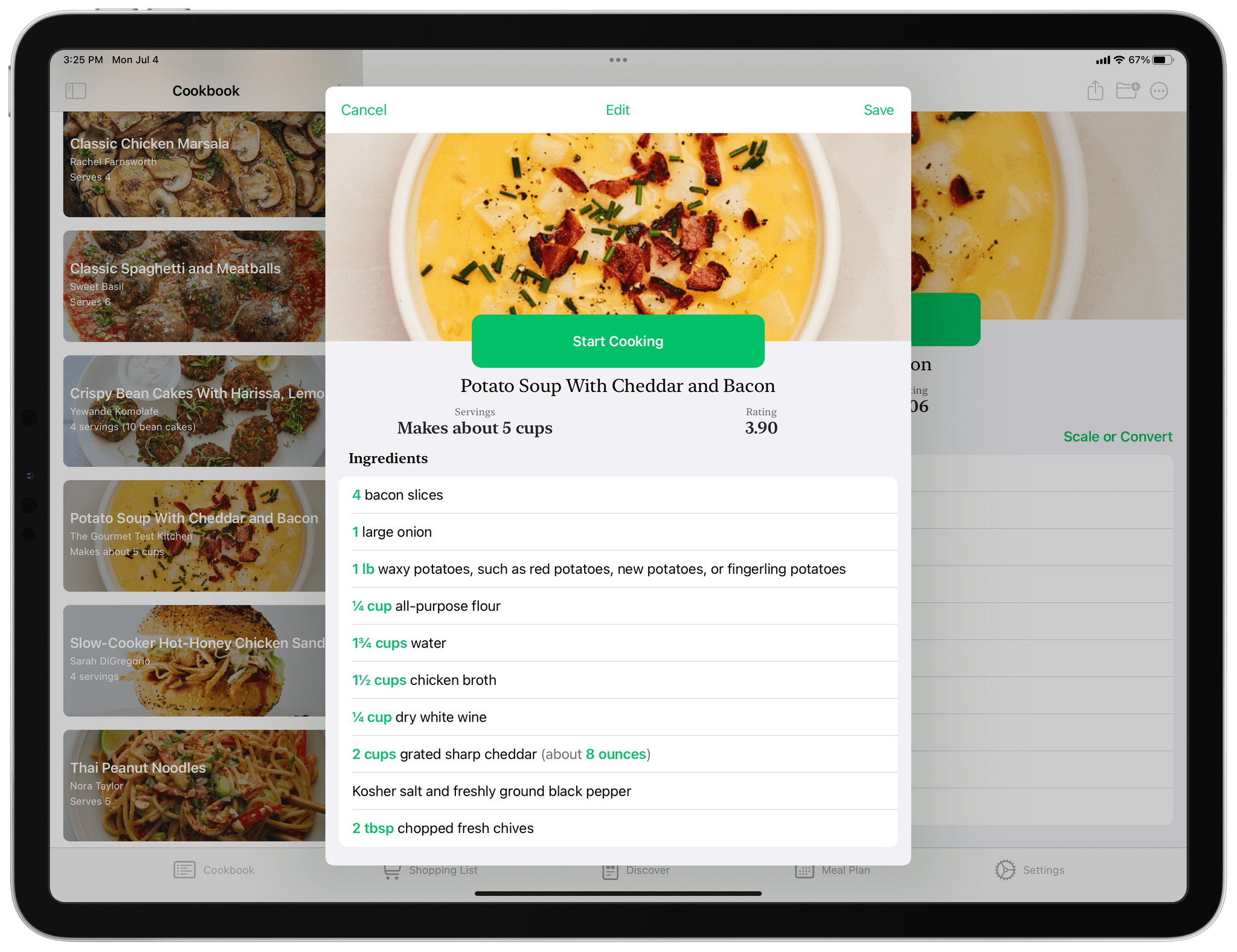 Adding a recipe using a URL.

There are several ways to add recipes to Pestle: you can type them manually, add one from a URL, use the app’s share sheet extension while browsing the web for recipes, or scan a recipe using your device’s camera. Another option is to use Pestle’s Discover tab, which automatically suggests new recipes, a feature I’ll cover more below. Importing recipes from Paprika and those that are in Pestle’s own format is available too.

In my experience, Pestle’s recipe parsing engine is on par with others I’ve used, pulling out lists of ingredients, cooking steps, and images and incorporating them into Pestle’s clear, modern design that makes recipes easy to read. The app uses green accents to highlight measurements and important UI elements, which works well in both light and dark modes. Pestle’s modern three-column design on the iPad is the best version of the app, giving recipes room to breathe, but it translates nicely to the iPhone too. 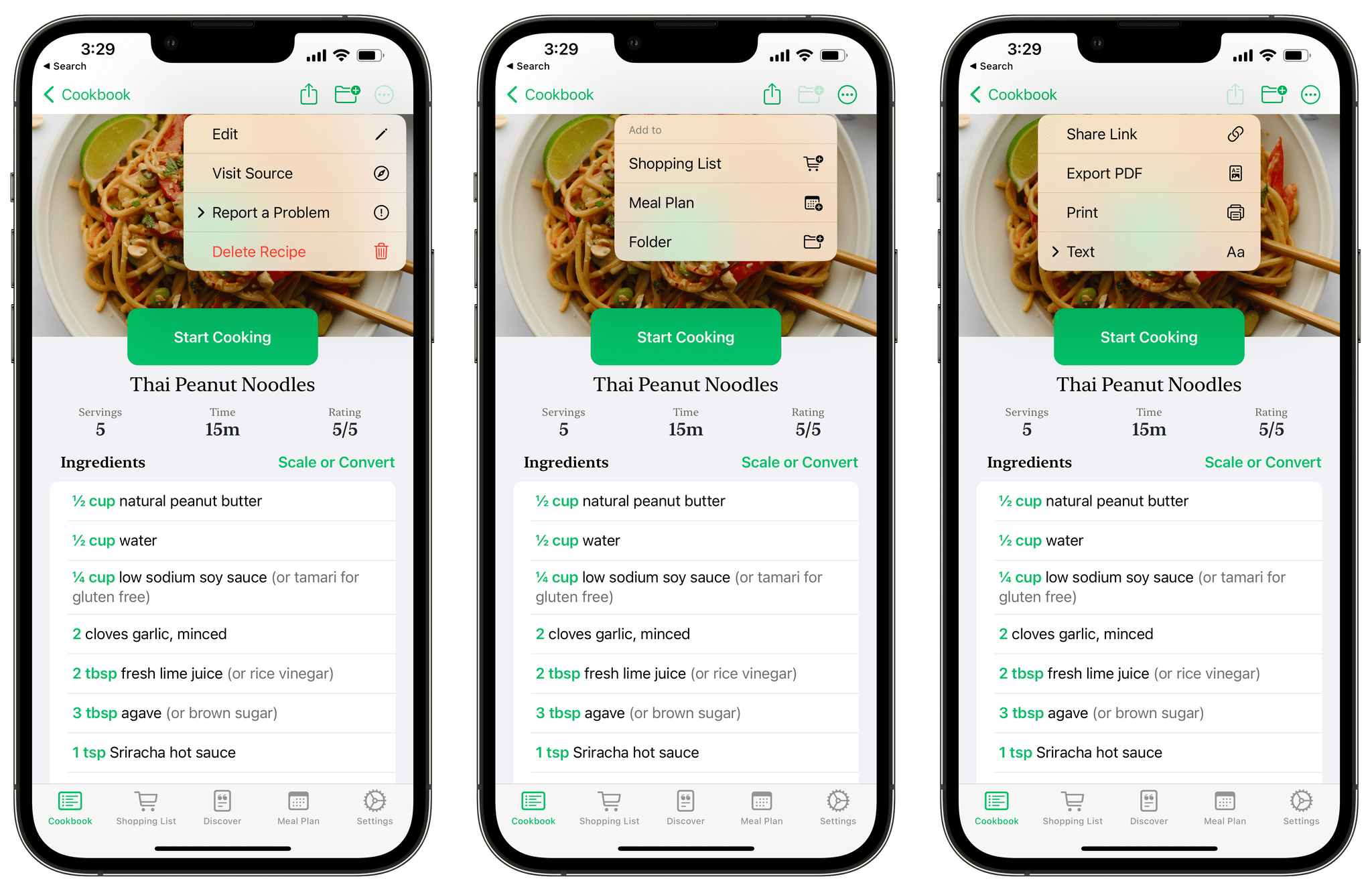 Pestle’s toolbar is packed with features.

The toolbar at the top of Pestle’s Cookbook screen offers ways to share a recipe by using a link, starting a SharePlay session, exporting as a PDF, printing, or generating a text version. In the toolbar, there’s a folder icon that allows you to add a recipe to your meal plan, generate a shopping list, or move a recipe to a folder you’ve created too. Finally, the toolbar’s more button lets you edit the recipe, visit its source on the web, report a problem, or delete the recipe entirely. 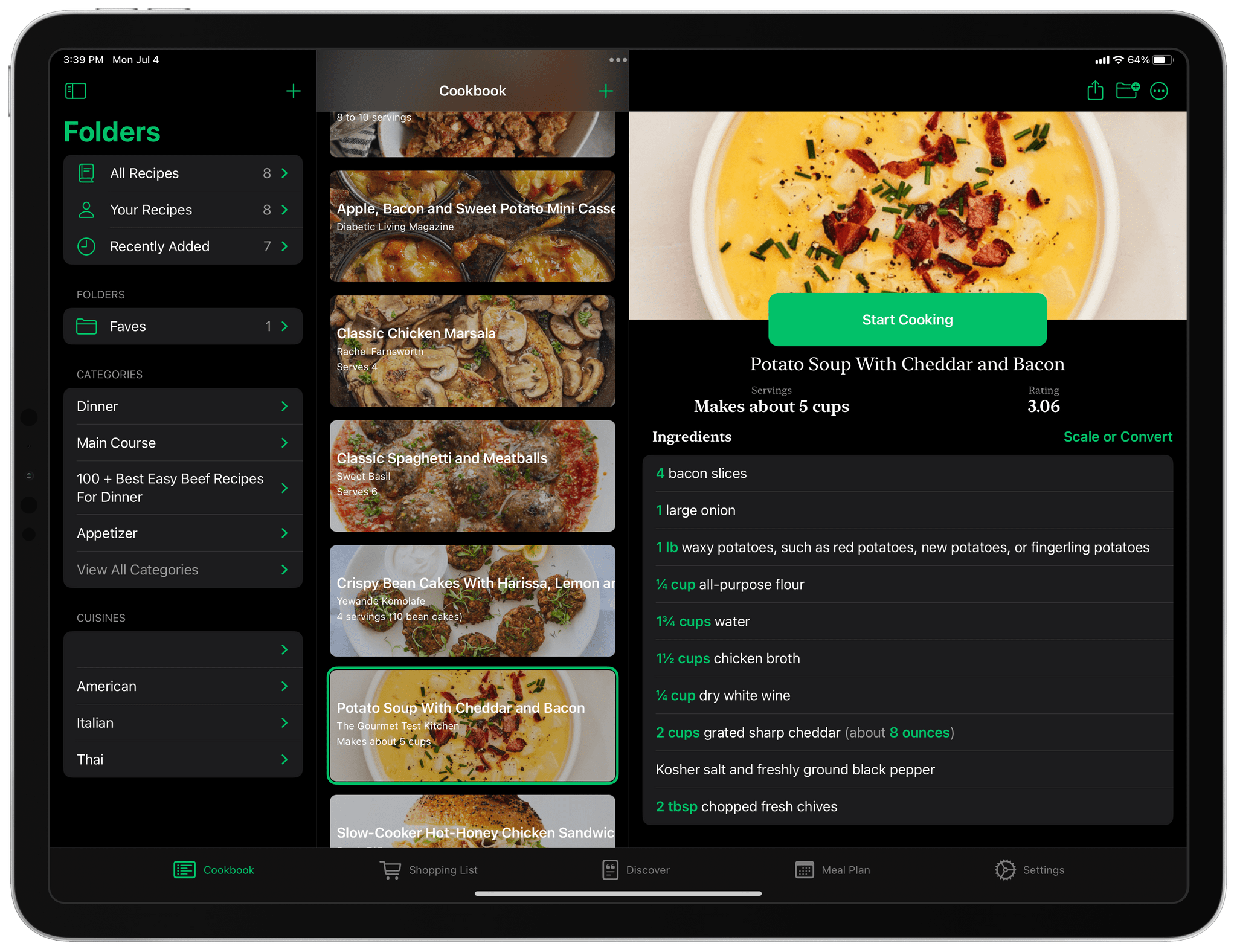 The folders you create in Pestle are supplemented by system-generated ‘All Recipes,’ ‘Your Recipes,’ and ‘Recently Added’ recipes, along with automatically-generated recipe categories and cuisines. The multiple options provide nice alternative ways to browse your recipe collection, but in my experience, the categorization and cuisine filtering results were hit or miss. Meal planning saves recipes to a chronological list of upcoming days. Tap on the recipe on any date to view it and begin cooking. Unlike Mela, however, your Pestle meal plan does not sync with Apple’s Calendar app. 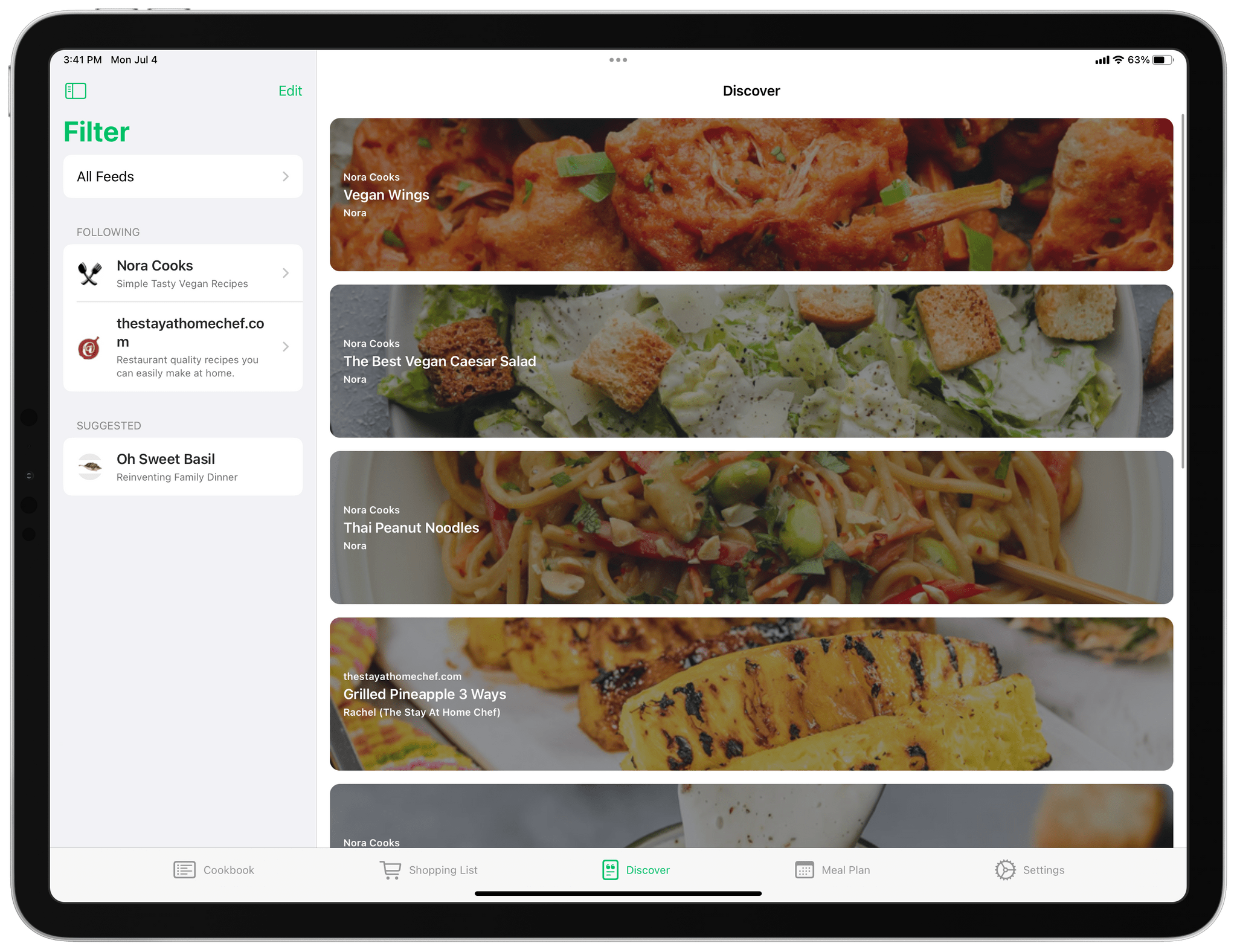 Discover is an automatically-generated list of recipes pulled from the websites from which you’ve added dishes to your recipe collection. Pestle appears to be using those sites’ RSS feeds because they can be viewed together or individually and are referred to in the app as ‘Feeds.’ If the app adds a feed that you don’t want, just swipe left in the sidebar to reveal an option to delete it. Deleted sites are moved to a Suggested section of the sidebar, so you can add them back any time you want. I like that Pestle removes the friction from adding sites to Discovery by making the process automatic a lot. When it’s time to cook, Pestle has a big green ‘Start Cooking’ button in every recipe that’s easy to hit even if your iPhone or iPad is sitting on a kitchen counter an arm’s length away from you. Once in cooking mode on an iPad, your ingredients are listed along the left side of the screen, with each step of the recipe displayed in big text on the right with the most important parts of the text, like ingredients and cooking times, highlighted in Pestle’s signature shade of green. Tapping on the green text displays quantities for ingredients and offers to start a timer for cooking times.

You can move forward and back through steps with the big buttons on the bottom of the screen or activate voice recognition in the top right corner of the screen to move back and forth using ‘Next’ and ‘Previous.’ You can change the spoken words used to move through the recipe in Settings. Timers are also available in the toolbar at the top of the screen as you cook. 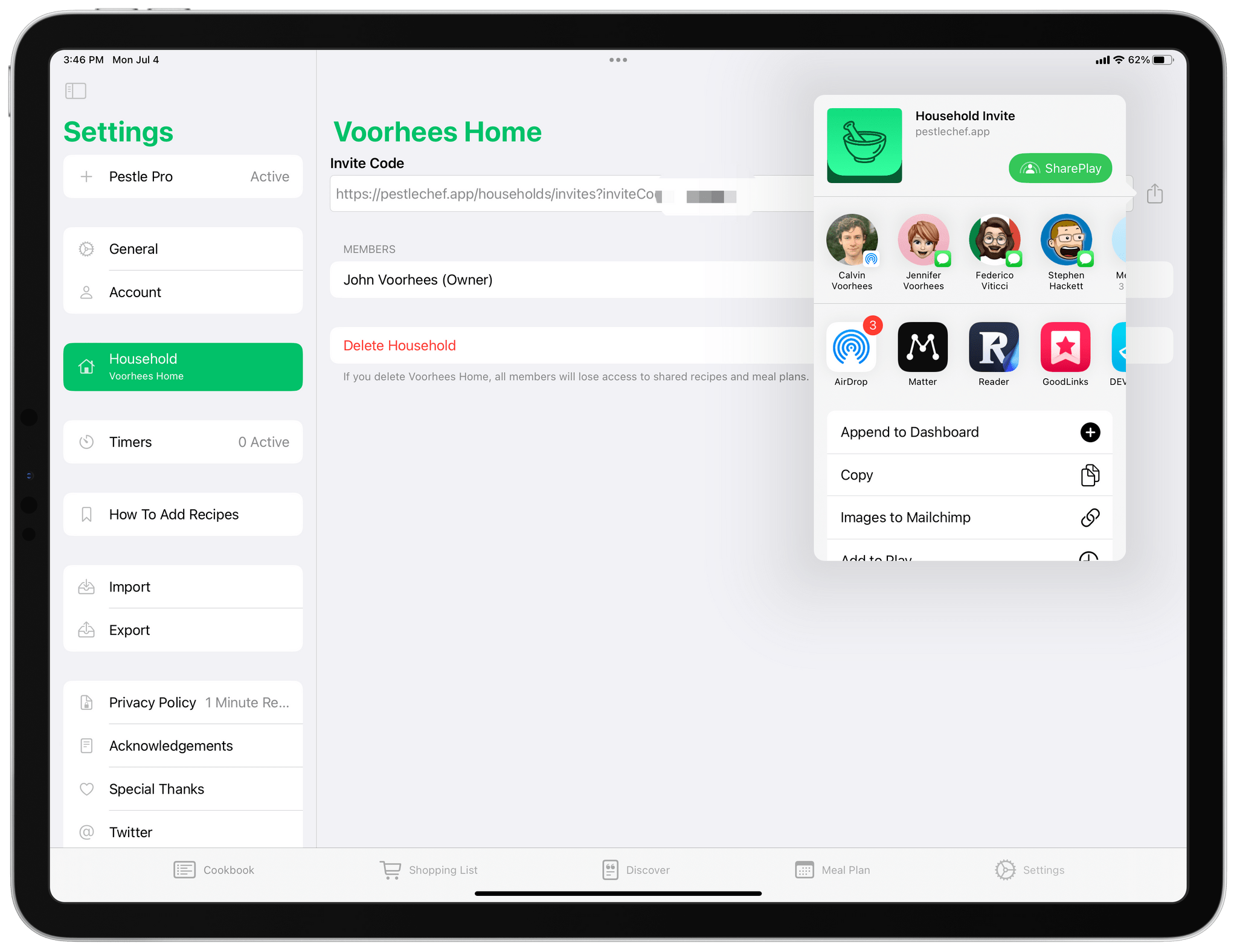 Setting up a household for sharing recipes is as simple as sharing a URL. 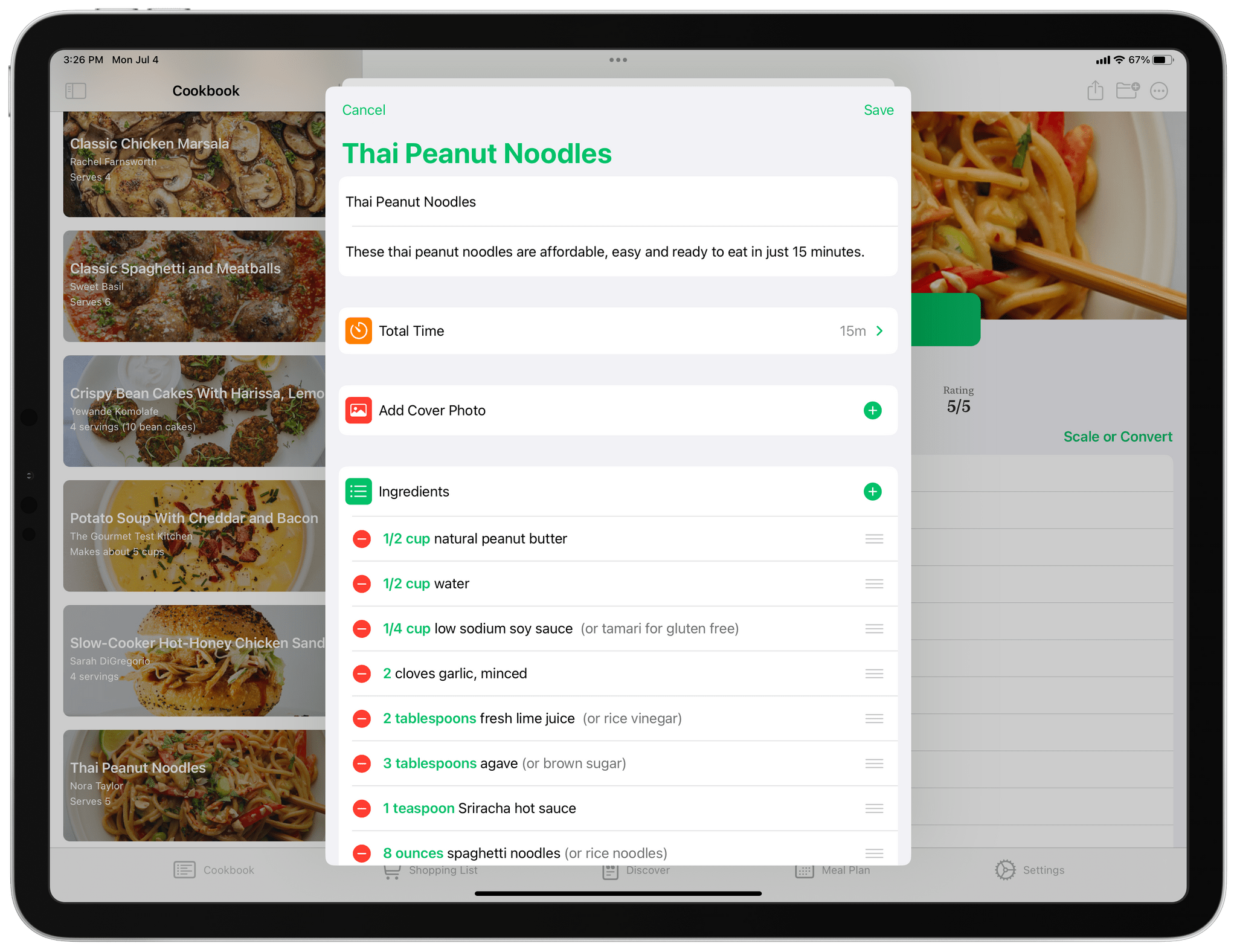 You can now edit a recipe before saving it as part of adding a new one.

The latest update also adds the ability to edit a recipe during the import process but before it’s saved and an experimental parser that is activated in settings and is able to handle recipe imports from a greater number of websites than the standard parser.

In the short time since its introduction five months ago, Pestle has grown into an excellent option for organizing and managing recipes, grocery shopping, and meal planning. Features like voice recognition and the automation of the app’s discovery tabs are some of my favorite touches that set it apart from many of the recipe apps I’ve tried. I’d like to see Pestle add support for the Mac and Shortcuts, but I don’t think the lack of those features will meaningfully detract from the experience of using the app for most people. If you’ve been looking for a new recipe manager, be sure to include Pestle among the apps you consider.