One trend that emerged from stay-home orders this year is that many people have spent more time cooking than ever before. Many restaurants have been unable to offer indoor dining, and the lack of a commute as much of society adjusted to work-from-home life provided the opportunity to spend more time in the kitchen. Bread baking became a popular habit, but so did home cooking in general. All of this has brought an influx of new entrants to cooking.

I’m not new to cooking, but I’ve nonetheless found myself in the market for a better solution for recipe management, meal planning, and cooking walkthroughs. The app I’ve found best suited for my needs is Crouton, from developer Devin Davies.

Crouton offers a handful of valuable aids for cooking, but the feature at the center of it all is the app’s recipe management system. Once you have recipes stored in the app, you can view those recipes in a well-designed, intuitive format, but you’ll also be able to easily assign recipes to your weekly meal plan, add ingredients to your grocery list, or be guided through step-by-step instructions while cooking.

To get started adding recipes, there are a few options available: you can create new recipes via manual entry, import recipes from Paprika, or import recipes from the web. I used the Paprika importer my first day with the app and it saved me a lot of time. Since then, my primary method of adding recipes has been via web imports. While there’s unfortunately no share extension or action extension to do this directly from Safari, Crouton’s web importer is nearly as pain-free an experience. Copy the URL for a recipe you found online to the clipboard, then open Crouton and you’ll see a pop-up offering to import that recipe into your collection. You can modify any details you’d like, but in my experience the web importer has done a solid job on every try.

Recipes can be sorted into folders you create, otherwise they all live in the default ‘All Recipes’ folder. One nice touch is that recipes can be stored in multiple folders at once, making it more like a tagging system than a traditional folder approach. It’s an important detail since plenty of recipes don’t fit neatly into a single category. 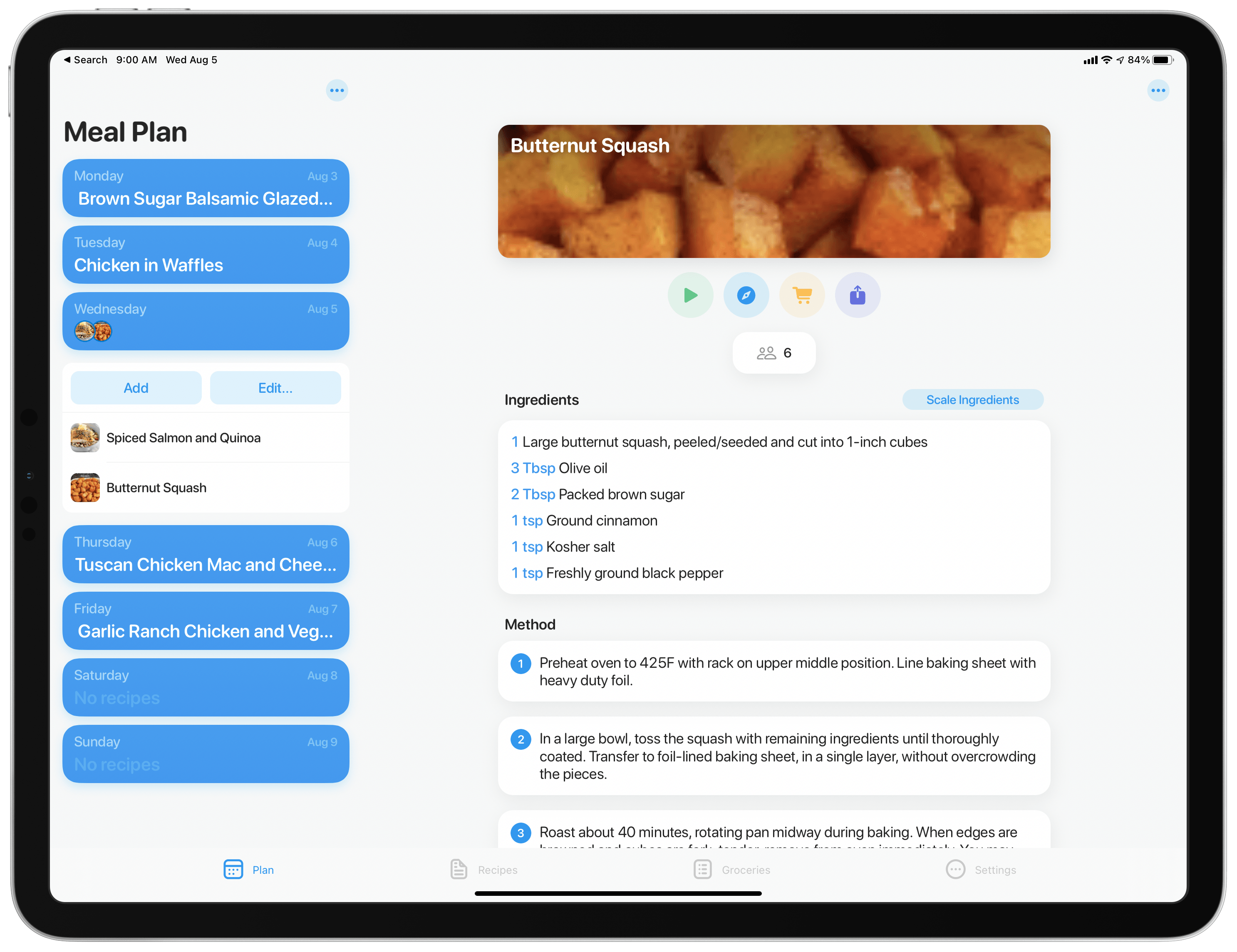 My two favorite aspects of Crouton are its intuitive modern design for parsing recipes and the ease of adding those recipes to a meal plan.

On a recipe’s detail screen, everything is neatly organized in a layout that makes sense. Rounded rectangles are used to house each of the different blocks of data available for recipes, such as prep and cook times, the ingredients list, and numbered step-by-step cooking directions. As someone who considers himself barely more than a cooking novice, Crouton’s playful aesthetics help make recipes feel more approachable to me.

Another thing I appreciate about the recipe detail screen is that it’s not over-cluttered with features you may not care about; rather, every feature has been thoughtfully added and fits well into the layout of the page. Those features include the ability to scale a recipe’s ingredients for the number of people you’re feeding, hit the play button to enter cooking mode and get one instructional step on-screen at a time, tap the shopping cart item to easily add select ingredients to your grocery list, and share the recipe in a variety of formats – the PDF option even lets you customize the document’s design and contents. 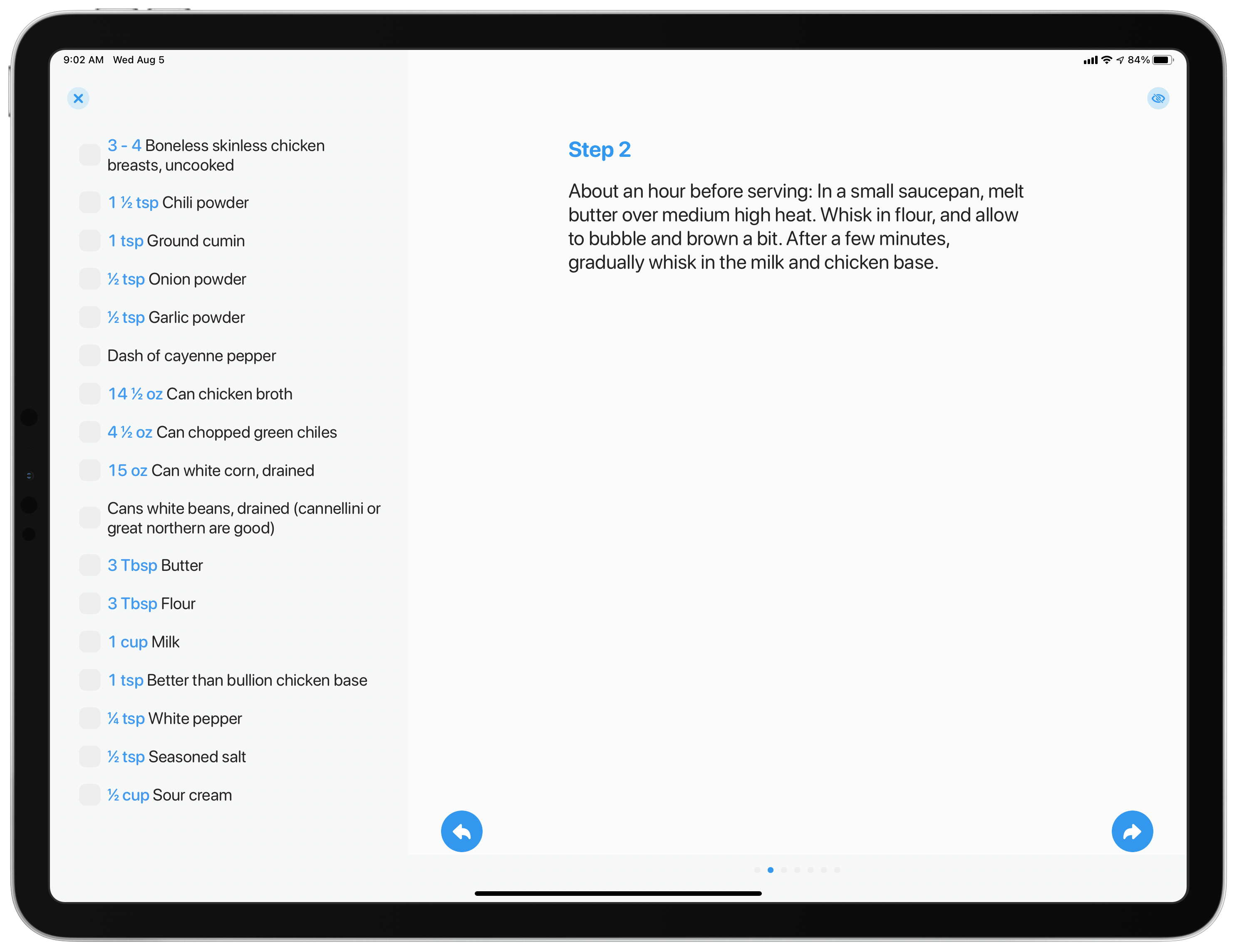 Cooking mode is great on the iPad, where ingredients are visible on the left and instructions on the right.

Speaking of cooking mode, the most natural way to cycle through each instructional step is to swipe through them, or use the arrow buttons at the bottom of the screen. But it’s worth noting that there’s a hands-free mode too on devices featuring the TrueDepth camera system. Developer Devin Davies has implemented a clever way of using the TrueDepth camera’s face detection features such that you can wink at your device to have it cycle through cooking steps. A right wink moves to the next step and a left wink moves backwards. So if you can set your compatible iPhone or iPad Pro at a level where it can see your face well, this is a convenient way to keep dirty hands away from your device. You can enable this feature via the eye icon in the top-right corner of cooking mode.

Meal planning has a dedicated tab in Crouton’s tab bar, and consists of a simple list of current and upcoming days in descending order. Tap a day and you’ll see your collection of recipes, sorted into their appropriate folders, for you to choose from. You can add either a single recipe to a day, or multiple recipes to cover not only the main entree but also any sides and/or dessert you plan to prepare. There’s nothing innovative about the way any of this works, but there doesn’t need to be – its simplicity is its strength. 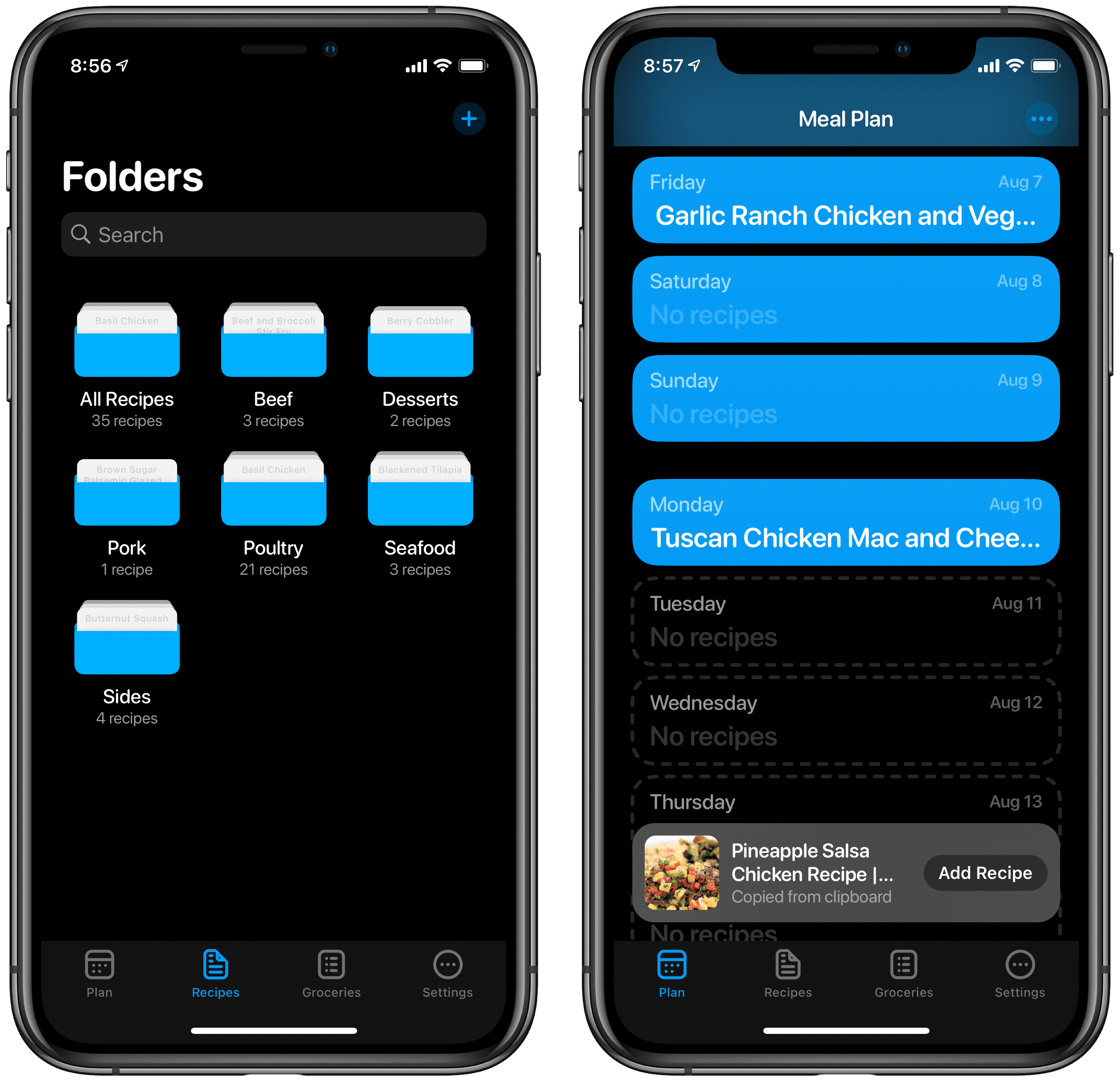 I don’t use the grocery function of Crouton, but it’s worth noting that it’s very easy to add ingredients from your recipes to the in-app Groceries tab, which can also hold grocery items you manually add. The best part is that this tab can be synced with Reminders, so that the contents of your grocery list in reminders is reflected in Crouton as well, and vice versa.

Finally, Crouton comes equipped with the sort of system features you would expect from a modern app. Dark mode support enables automatic theme switching, context menus are used throughout the UI, and you can choose from a selection of alternate app icons for your Home screen. Near and dear to my heart, there’s an iPad client that supports Split View and Slide Over multitasking, and the app also takes good advantage of the larger display with a two-panel layout. I’ve found the iPad app especially useful while in the process of cooking, since I can sit the device in Magic Keyboard atop our kitchen island and swipe through cooking directions one page at a time.

Crouton makes meal planning easy, provides a beautiful way to store and view your recipes, and plays a key role in the cooking process. I’m not someone who cooks more than once or twice a week, so it’s possible that for someone more active in the kitchen there are advanced features missing that I’m unaware of, but I’ve found that Crouton offers exactly what I need in this type of app. It’s modern, keeps things simple in a good way, and offers valuable utility with style.

Crouton is a free download on the App Store, with a one-time In-App Purchase available to remove recipe storage limits.