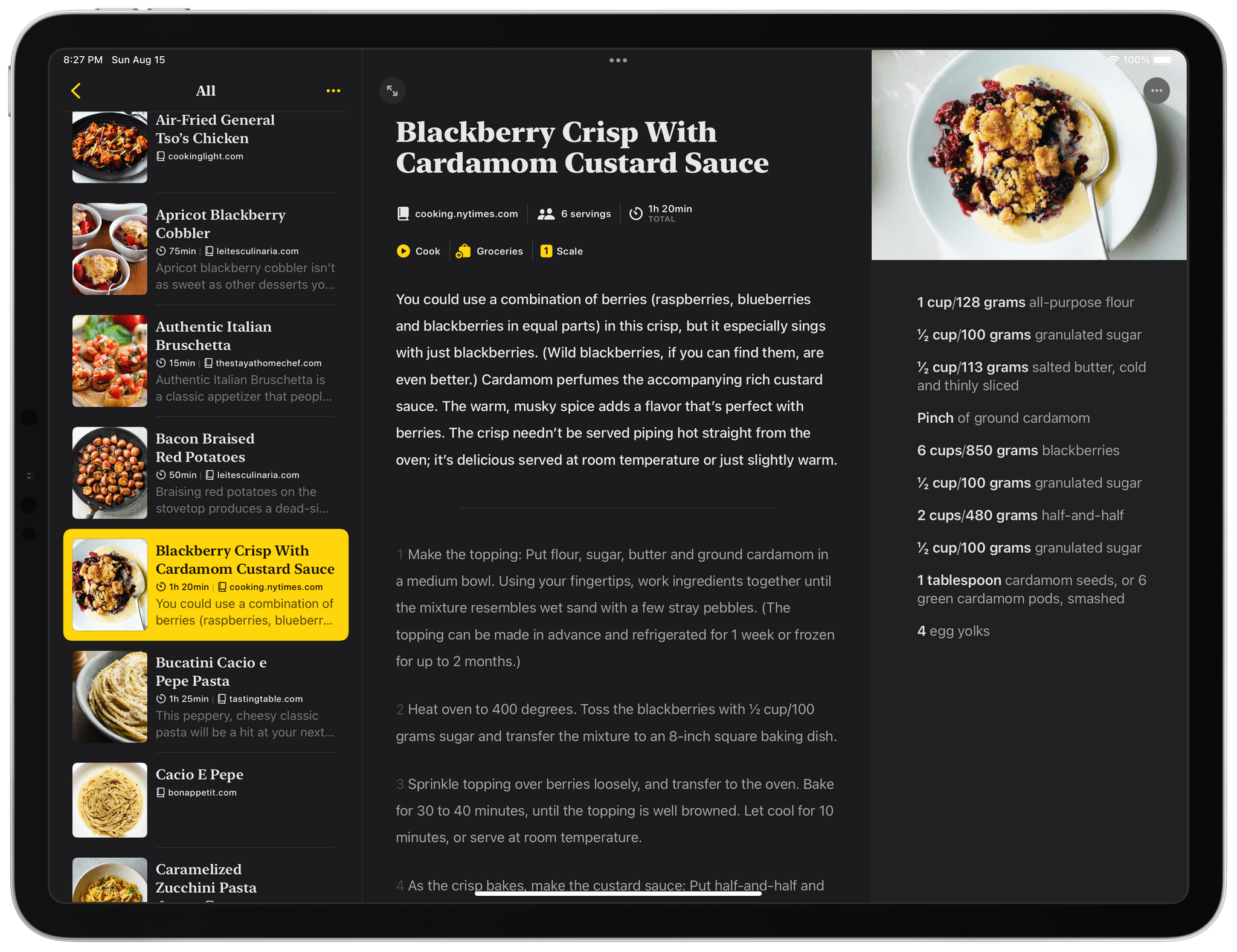 Silvio Rizzi, the developer of RSS client Reeder, has released a brand new recipe and cooking app called Mela for the iPhone, iPad, and Mac, which has immediately become my favorite apps for planning and preparing meals. For me, the two essential aspects of an app like this are how it handles adding new recipes and whether it is easy to use while you’re cooking. Mela excels at both.

I’m going to focus primarily on the iPad experience for this review because the iPad strikes the best balance of portability combined with a large screen that works well when you’re in the kitchen cooking, but the app is also available on the iPhone and Mac. Although my overwhelming preference is to use Mela on an iPad, an equal amount of attention has gone into the design of the iPhone and Mac apps, accounting for the different screen sizes and making the most of each. That’s true on the iPad, too, where the experience differs depending on the size of the iPad you’re using. 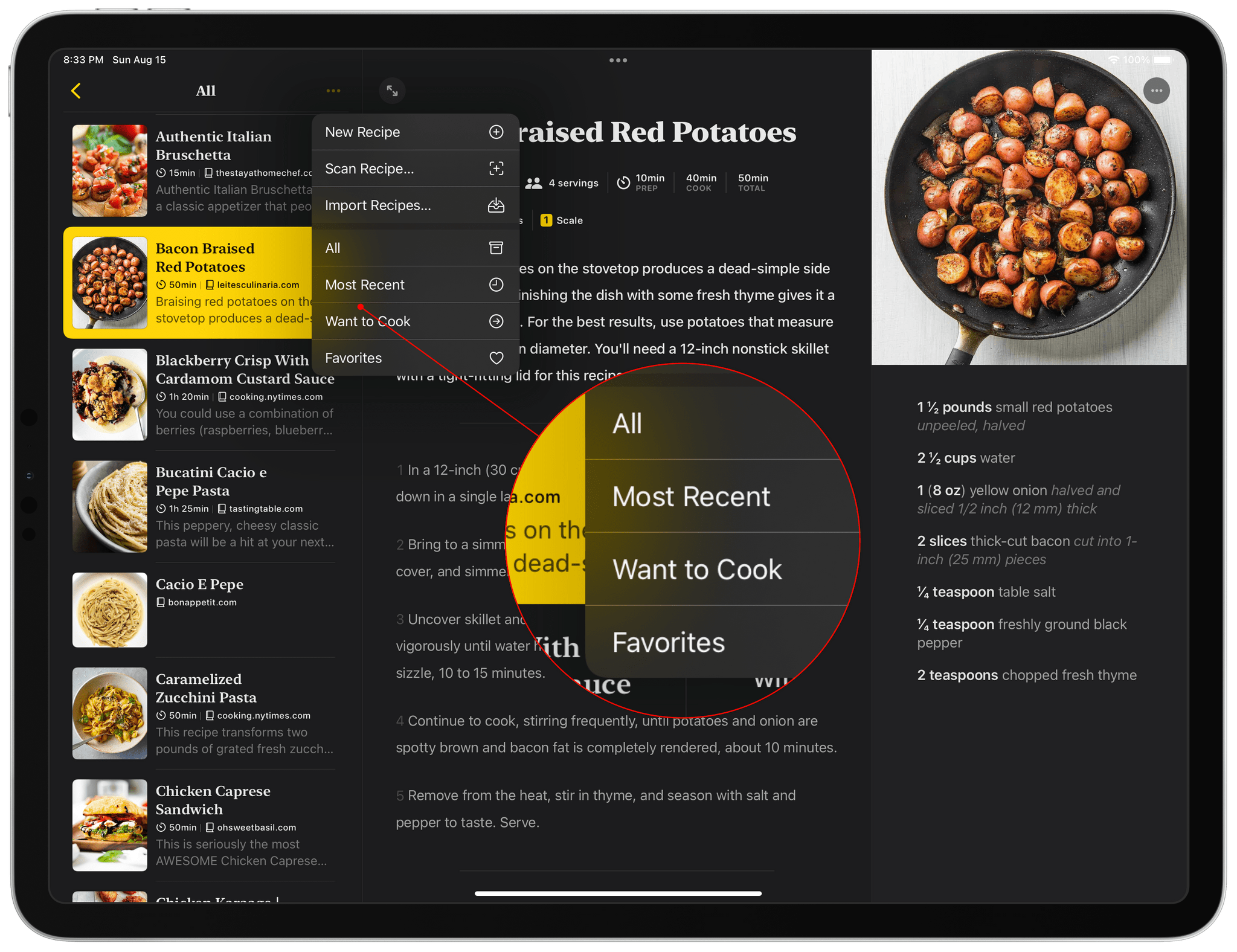 With Mela, you can view all of your recipes, your favorites, a ‘Want to Cook’ list, and a Most Recent list.

Before digging more deeply into Mela’s design, I want to cover how you get recipes into the app because no amount of design polish can overcome being unable to get recipes into an app. Mela does exceptionally well at importing and parsing recipes from a variety of websites. The app also allows you to mark recipes as ‘Favorites’ and ‘Want to Cook’ for an extra layer of organization and offers an automatically-generated ‘Most Recent’ list. 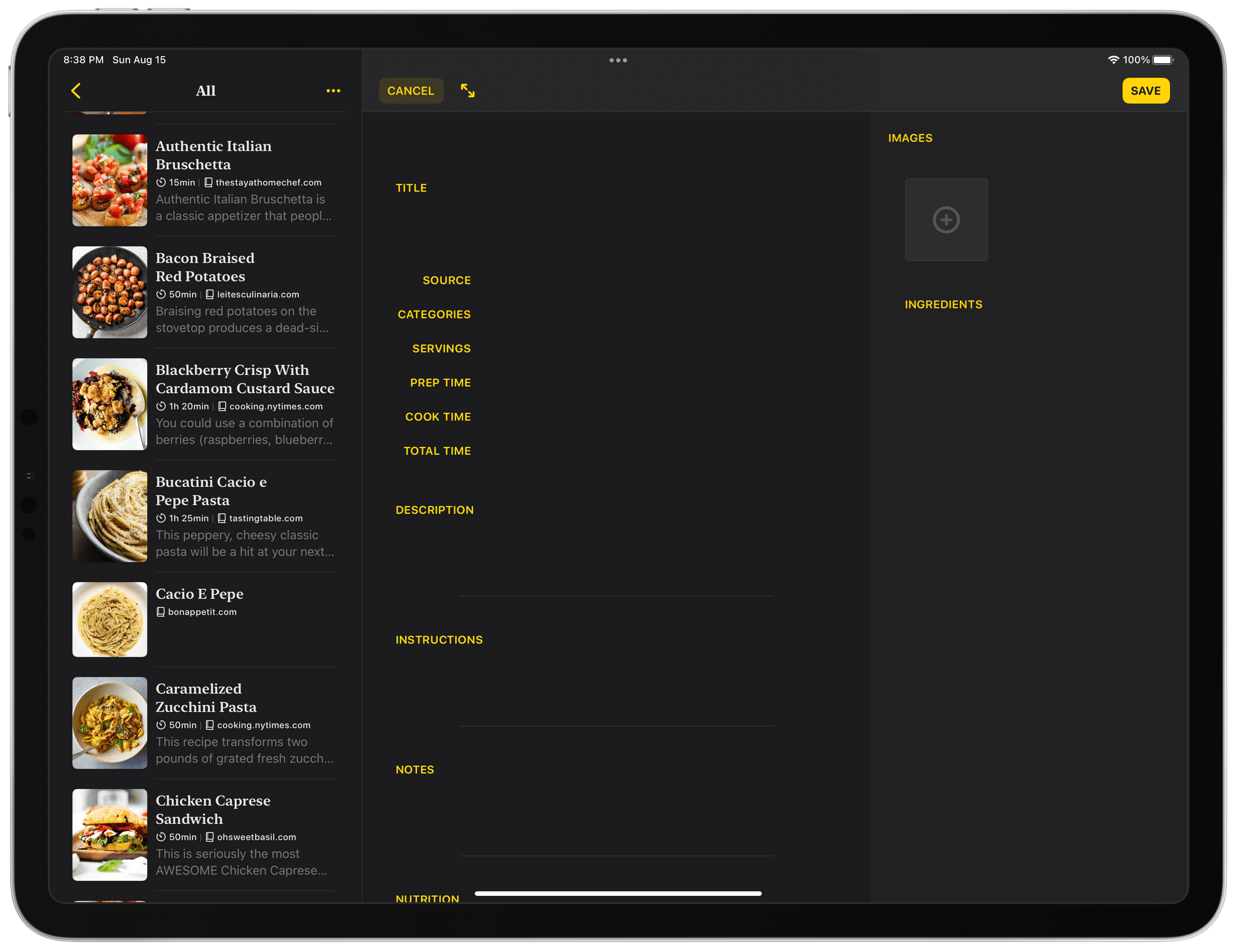 The app has several options for adding new recipes, including one that I’ve never seen in a recipe app before, which I’ll get into below. First, though, let’s start with my least favorite way to add a recipe to any app: manually. It’s my least favorite because the process can be tedious, but Mela makes it as painless as possible, with a set of clearly defined sections to fill out for each recipe you add and support for a subset of Markdown syntax for formatting a recipe’s text. 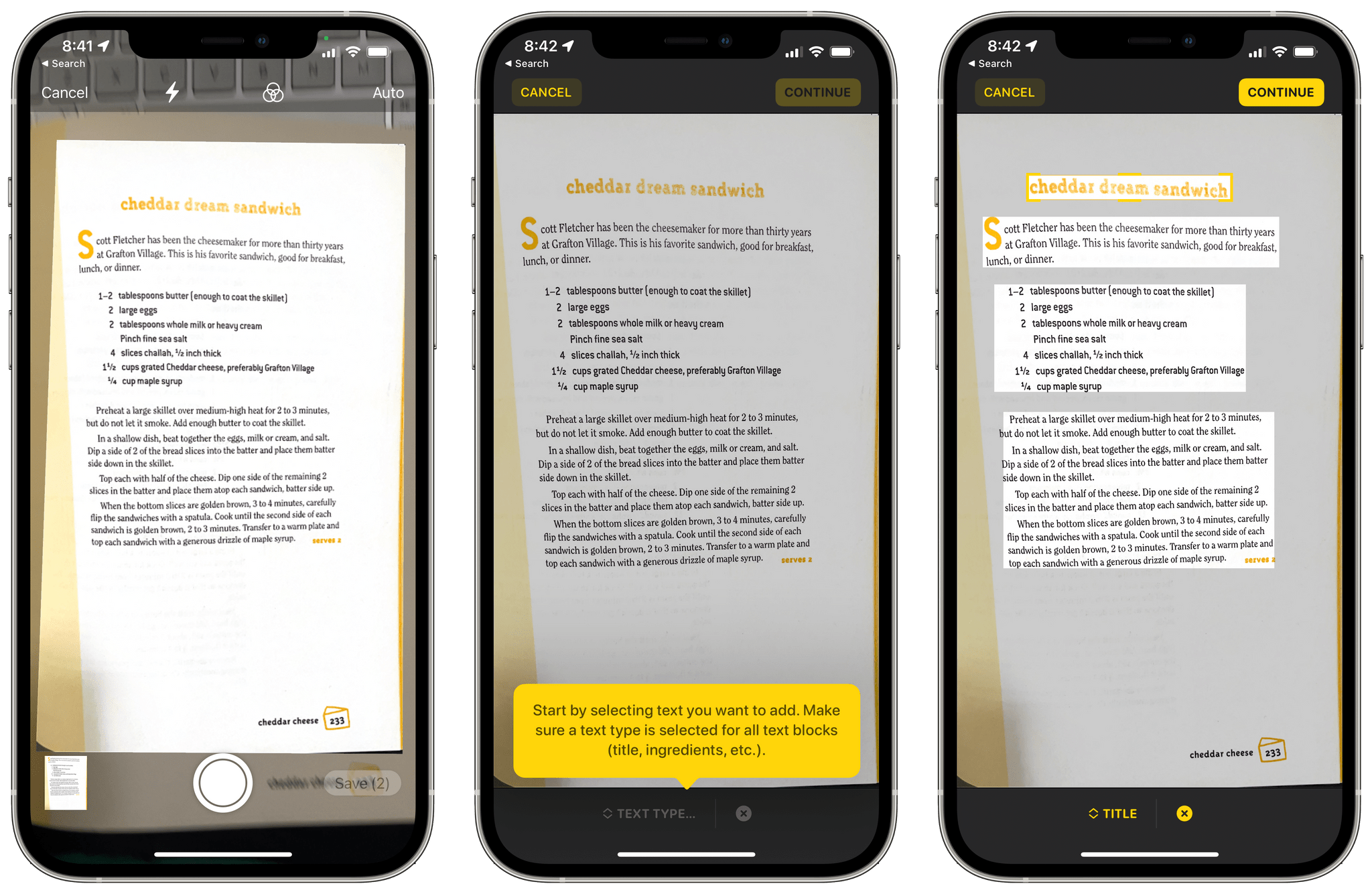 Scanning from a cookbook.

Another option is scanning a recipe from a book or other source using your iPhone or iPad’s camera or by importing a photo or image file. This even works on the Mac, where the app relies on the iPhone and iPad’s camera using macOS’s Continuity Camera features. After scanning a recipe, you can assign the blocks of text that are detected to categories like ‘Title,’ ‘Ingredients,’ and ‘Instructions.’ That way, the layout, and functionality associated with your imported recipe, will follow the same format as your other recipes. Scanning isn’t a feature I’ve used a lot, but in my limited testing, it works well. The scan results, which rely on iOS and iPadOS’s built-in scanning technology, aren’t perfect, but with the inclusion of a quick way to categorize blocks of text, cleaning up any scanning errors is relatively painless. 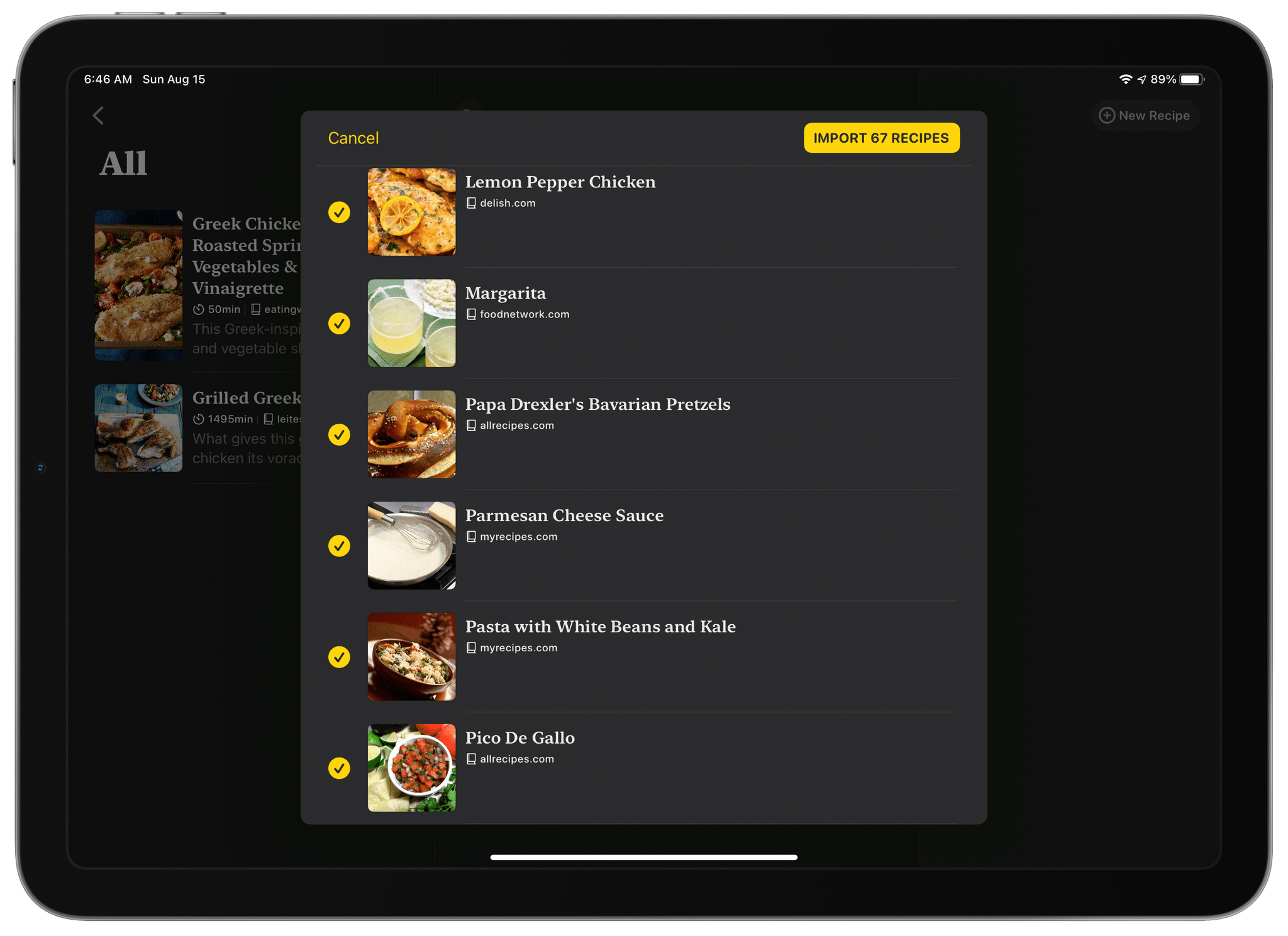 You can also import recipes. I’ve only tried this with my collection of Paprika recipes, but Mela was able to instantly read all 67 recipes, providing the option to select some or all of them for import. Import is something you may only ever use once, but for anyone with a large collection of recipes in Paprika, it’s good to know it’s fast and reliable. Mela can also import recipes in its own file format that someone shares with you.

In terms of exporting, you can share recipes in Mela’s own file format and print them as a PDF individually using the share sheet or long-press or right-click on a category like All, Want to Cook, or Favorites to bulk export recipes. 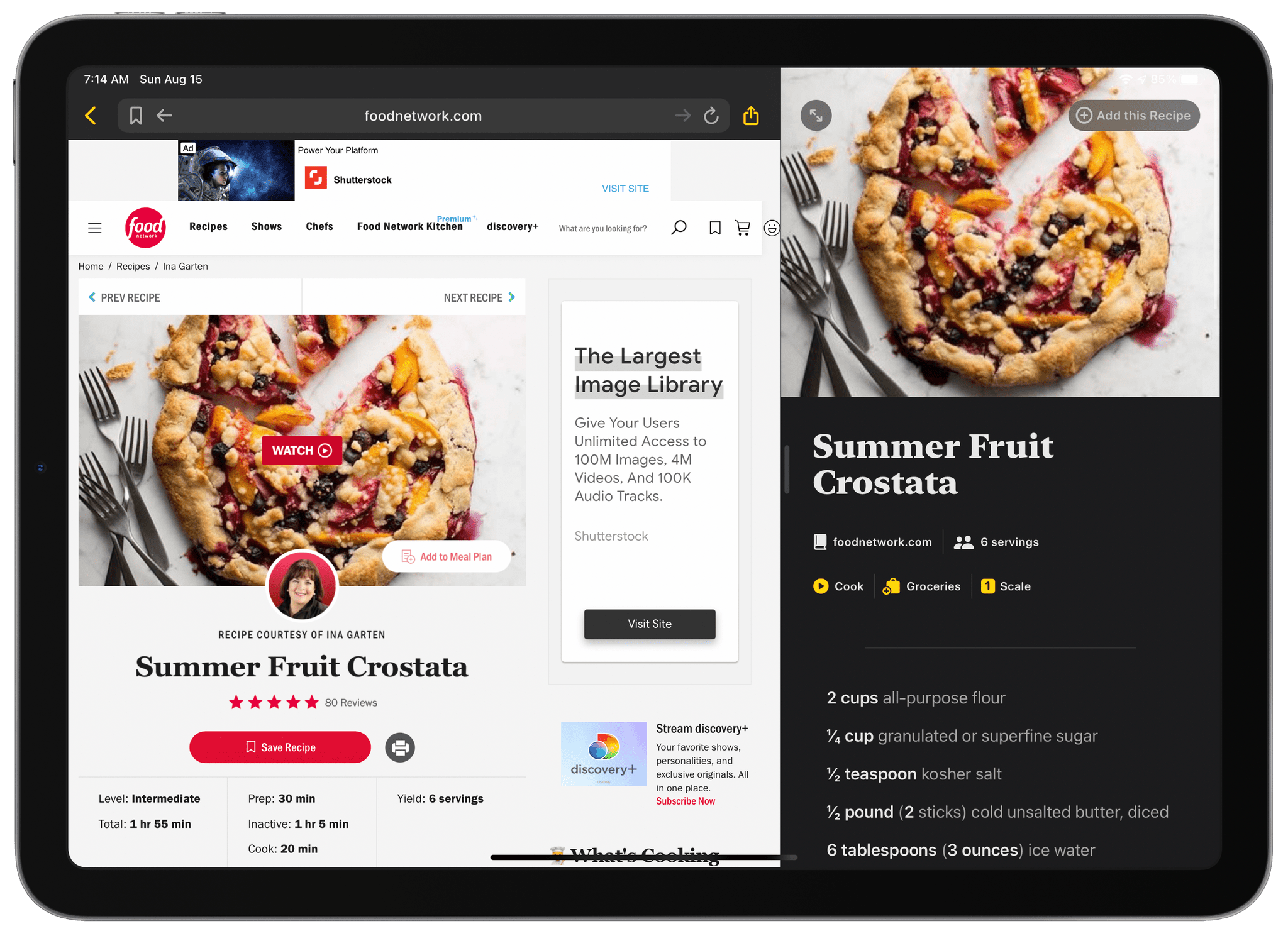 Another way to add recipes is using Mela’s built-in browser. On the iPad, the browser sits on the left side of the screen, with the right side reserved for any recipes the app detects. The feedback provided by the recipe detection panel is an excellent touch that makes adding recipes from websites easy. 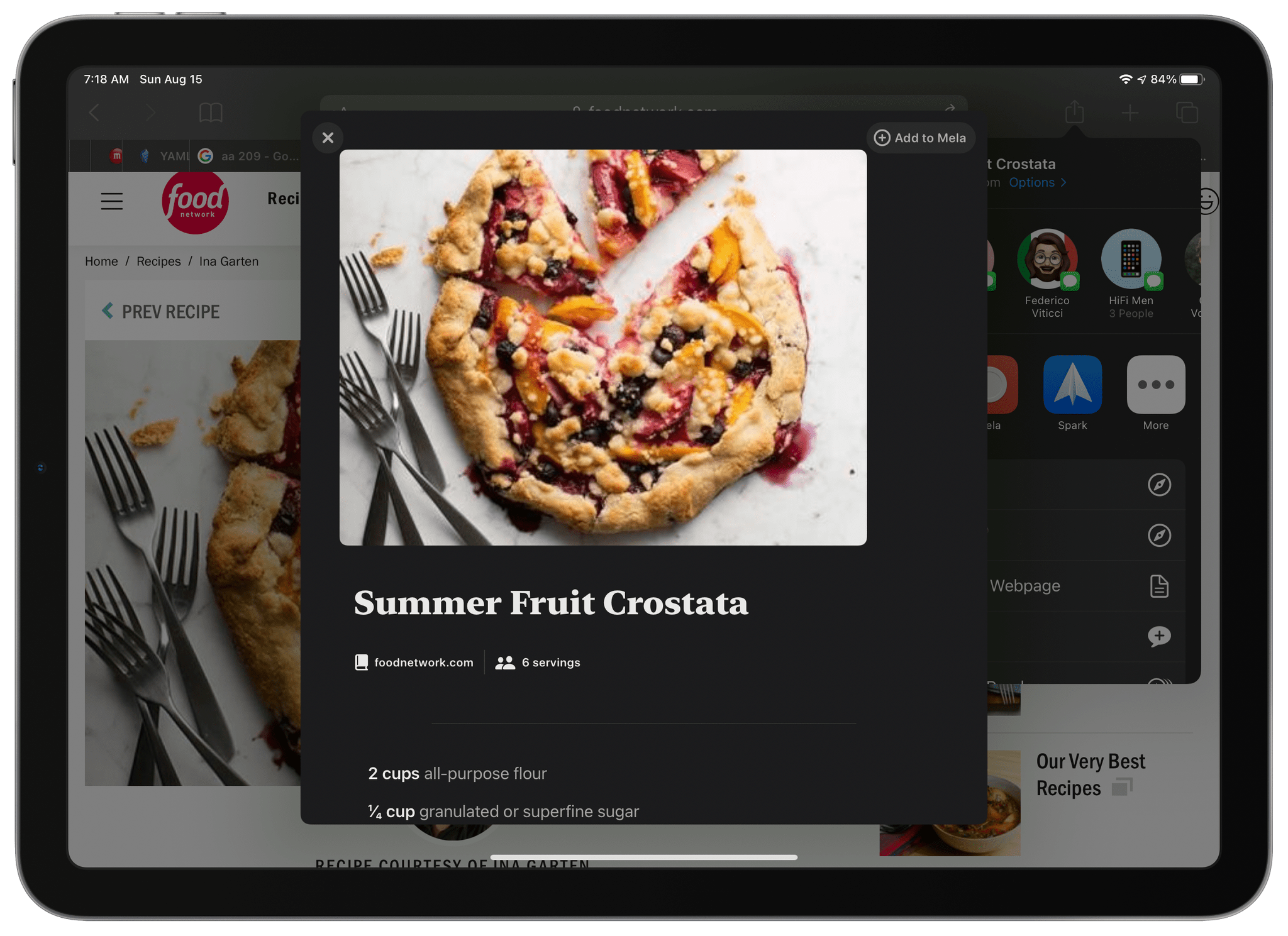 Mela’s share extension includes a detailed preview, so you can check if the parser worked properly.

Mela includes a share extension too, which is one of the primary ways I get new recipes into the app. If someone sends me a link or I happen upon a recipe as I browse the web, the extension is the fastest way to add it to Mela. Like the app’s built-in browser, the extension displays a preview of the recipe complete with image, ingredients, instructions, and other information before you save it, so you can verify that the recipe has been properly parsed before tapping ‘Add to Mela.’ 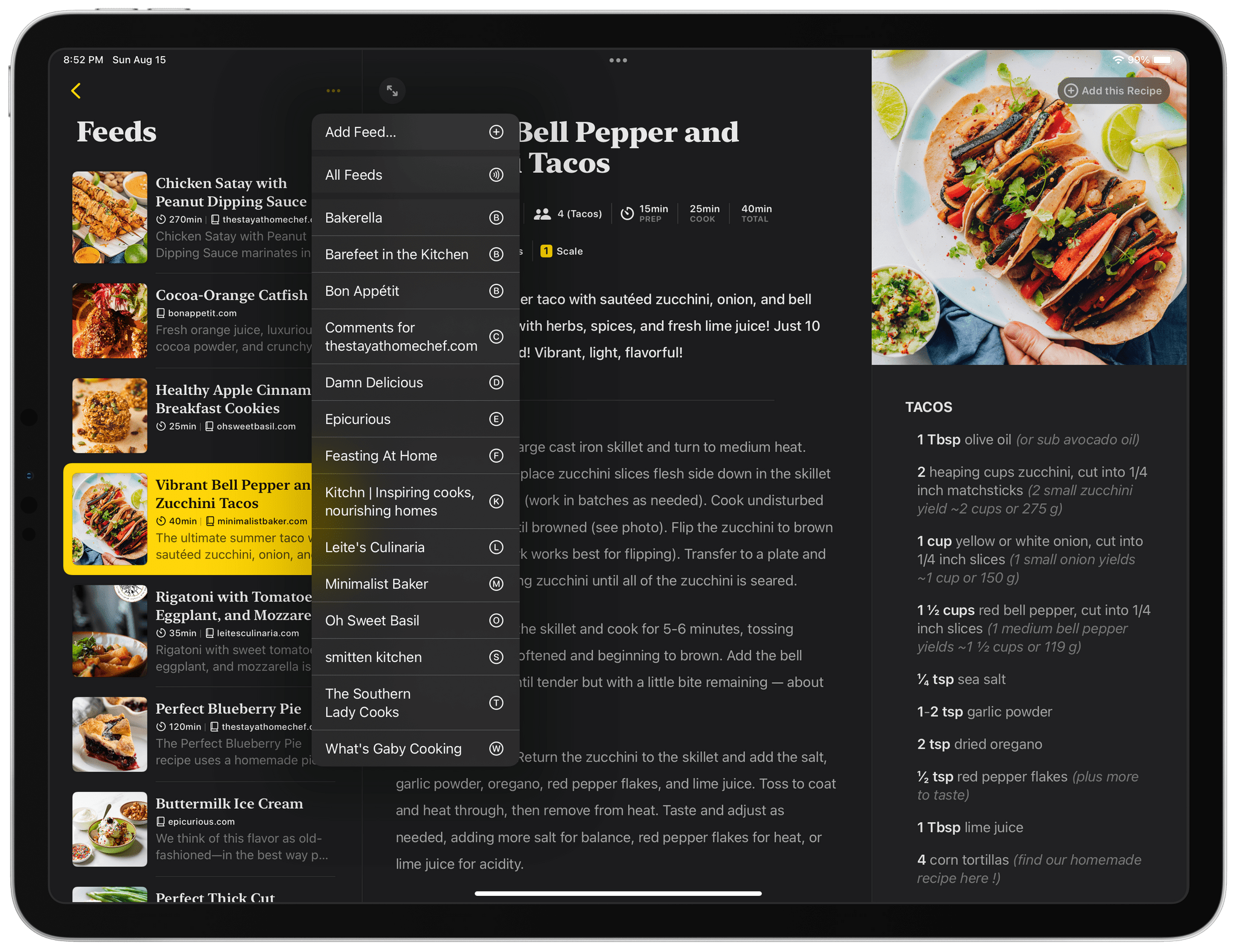 Some of the recipe RSS feeds I’ve been following.

Finally, Mela offers a way to collect recipes that I haven’t seen anywhere else: RSS. It may not be surprising that Mela uses RSS since Rizzi’s other app is an RSS client, but what I didn’t expect is what a fantastic way it is to discover new recipes. Feeds have a dedicated section in the app’s left sidebar. Tap the More button at the top of the sidebar, and add a URL. Mela will look for any RSS feeds and offer to add them to your collection. Then, when you open the feed section again, you’ll see recipes from that, and any other feeds you’ve added either together chronologically or by website.

The recipes delivered to your feed are available locally, so you can prepare them from right inside the Feeds section of the app if you’d like, or save them to your recipe collection using the ‘Add this Recipe’ button. The recipes in Feeds can be searched using the search field at the top of the recipe list and refreshed by pulling down on the list. It’s a brilliant addition to a recipe app that makes discovery much easier once you’ve added a handful of sites with recipes you like.

The one trouble with feeds, which isn’t a limitation of the app itself, is I’ve noticed that a lot of recipe sites don’t have RSS feeds. There are still plenty of excellent feeds available, but it took some work to find them, so I’d love to see Mela add a starter set or recommendations in the app itself. In the meantime, here are a few of my favorites:

That’s a lot of ways to get recipes into Mela, but with the exception of RSS, other apps offer similar features. What makes Mela truly special is its exceptional design. It’s clear that a lot of thought has gone into using Mela in the kitchen. The bright, yellow accent color and the clear, carefully laid out text are just part of the app’s appeal.

Two takes on the same recipe tailored to the size of two different iPads.

When it’s time to start cooking, pick a recipe from the app’s list on your iPad and then collapse it to focus on what you’re preparing. It’s a small thing enabled by the iPad’s modern, three-pane design, but one that eliminates clutter, allowing you to focus on what you’re preparing. The exact layout you’ll see depends on the device you’re using. On the iPad Air, the description of the dish and instructions are on the left with an image and ingredients on the right. On the 12.9” iPad Pro, Mela expands to three columns with the image and description on the left, instructions in the middle, and ingredients on the right, which is similar to the Mac layout. The iPhone uses a tab bar to navigate the app’s features, and recipes are displayed as a single column with an image followed by the description, ingredients, and instructions. 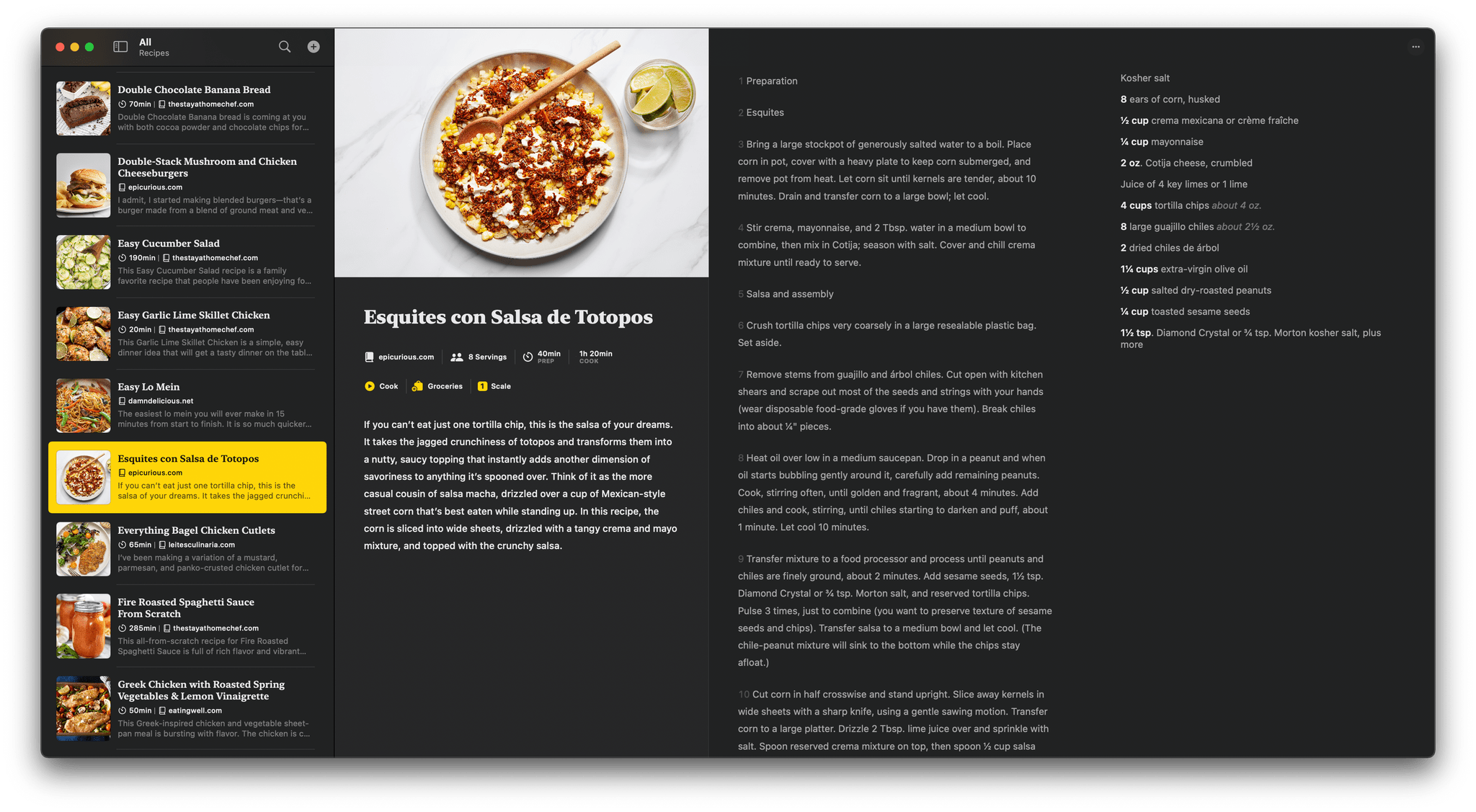 Mela looks fantastic on the Mac too. 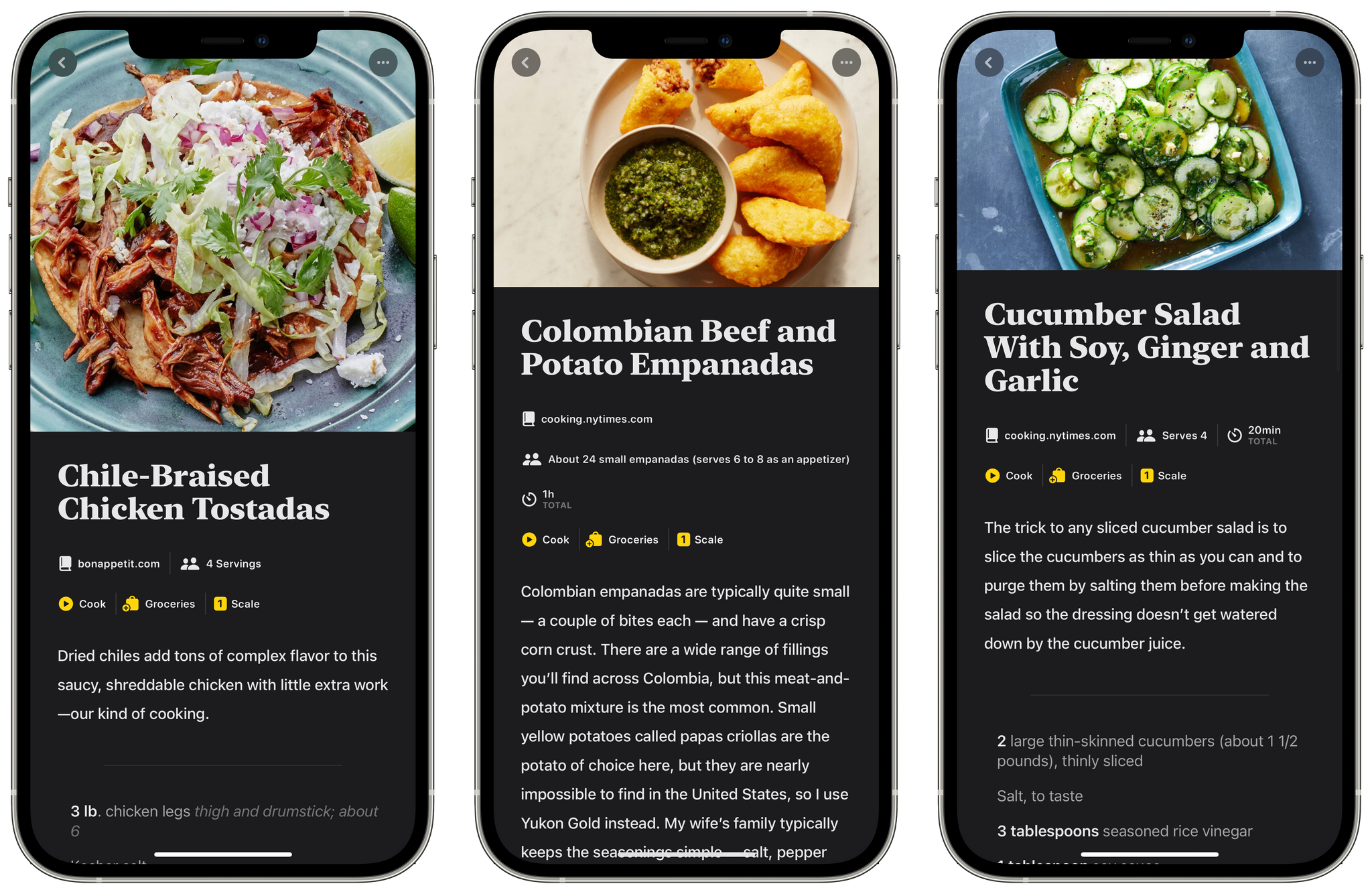 Its smaller screen isn’t ideal for cooking, but the iPhone is an excellent way to find new recipes.

Just beneath the name of the dish you’re preparing, you’ll find a link to the source on the web, serving information, and preparation time. Next, are yellow buttons labeled ‘Cook,’ ‘Groceries,’ and ‘Scale.’ Cook opens a new view that’s a sort of focus mode for cooking. Steps are displayed one at a time on the left, while ingredients are listed on the right. On the Mac, the app enters full-screen mode making the most of the entire display. On the iPhone, you’ll need to swipe back and forth between instructions and ingredients, which works well on the smaller screen. If you’ve got an attached keyboard, you can use the Space key and Shift + Space or the up and down arrow keys to move down and up the list of instructions. I can’t emphasize enough how much nicer Mela’s clear, focused text is to read as you cook. It eliminates one of the biggest frustrations of using a recipe app entirely. When it’s time to cook, Mela has an excellent cooking ‘focus mode’ that makes following a recipe a breeze.

The Grocery button allows you to add the ingredients of a dish to a list in the Reminders app. By default, Mela creates a new list called ‘Mela,’ but you can pick another one, which is what I did because I already have a list called Grocery that I share with my family. When you tap the Grocery button, the list of ingredients and the quantities you’ll need are opened in a popover window, with each item pre-selected to add to your list. If there are ingredients you’ve already got on hand, just uncheck those, tap Add, and you’re ready to start shopping. The ingredients will be added to Reminders with quantities listed in the Notes field.

Finally, the Scale button reveals a slider for up or downsizing a recipe, changing the quantity of ingredients automatically.

Mela is easily one of the best new apps I’ve tried this year. This isn’t a simple single-purpose utility. There’s a lot of functionality built into the app, and its design is far more refined than the typical 1.0 app. I’d like to see a curated list of recipe feeds, as I’ve already mentioned. Calendar-based meal planning, which I understand is on the feature roadmap, would be a nice addition too.

I’m also pleased that Mela is available on all of Apple’s platforms. I’ve focused on the iPad because that’s the device I use for cooking most often, but discovering new recipes happens on every platform I use, and I’m glad I have the flexibility to use whatever device I’ve got available.

I can’t point to any one feature of Mela as the thing that sets it apart from other recipe and cooking apps. Part of it is the innovative use of RSS, the carefully thought-out, focused cooking mode, and the reliability of table stakes features like recipe parsing. It’s more than that, though. Like Reeder, Rizzi’s RSS client, the app also succeeds by virtue of its careful attention to the interface and user interaction details that vary from platform to platform, making the most of each device. Bottom line, Mela is as delightful to use as it is useful.