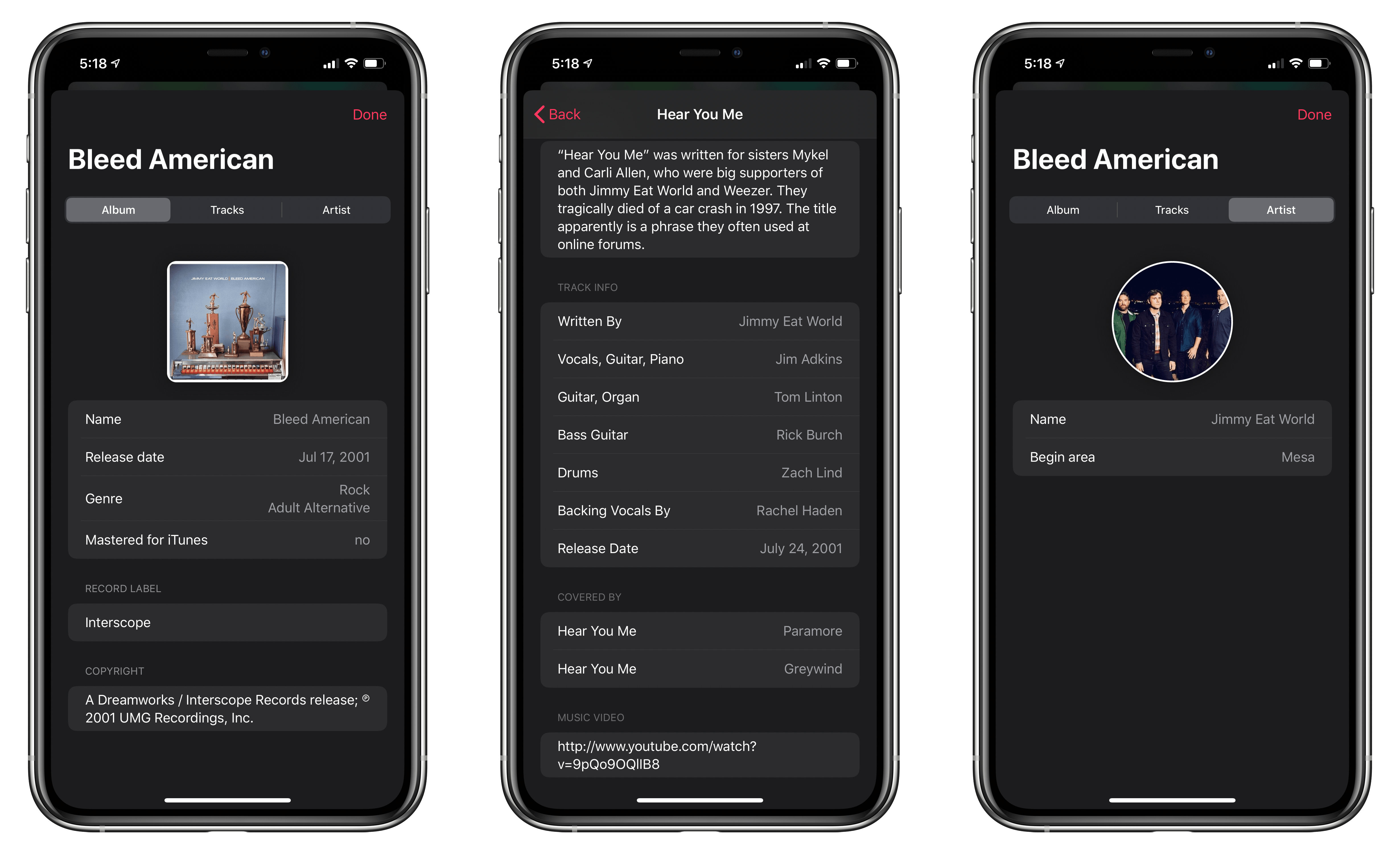 For as long as I can remember being interested in music as more than a mere source of background audio, but as an art form, I’ve been interested in the people who make music – the artists and their craft. Back when I used to buy CDs at my favorite record store in Viterbo, my hometown, I would peruse each album’s liner notes to not only read official lyrics and check out the artwork and/or exclusive photographs contained inside the booklet, but also to read the credits so I could know more about who arranged or mixed a particular track. Beyond the feeling of owning a tangible piece of music, there was something about reading through an album’s credits that served as a simple, yet effective reminder: that people – engineers, instrumentalists, vocalists, producers – created the art I enjoyed.

In today’s world of endless, a la carte streaming catalogs, we’ve reduced all of this to a cold technological term: metadata. Our music listening behaviors have shifted and evolved with time; when we browse Apple Music or Spotify, we’re inclined to simply search for a song or an album and hit play before we return to another app or game on our phones. A streaming service isn’t necessarily a place where we want to spend time learning more about music: it’s just a convenient, neatly designed delivery mechanism. The intentionality of sitting down to enjoy an artist’s creation has been lost to the allure of content and effortless consumption. Don’t get me wrong: I love the comfort of music streaming services, and I’m a happy Apple Music subscriber; but this is also why, for well over a year now, I’ve been rebuilding a personal music collection I can enjoy with a completely offline high-res music player.

Whether by design or as a byproduct of our new habits, metadata and credits don’t play a big role in modern music streaming services. We’re frustrated when a service gets the title of a song wrong or reports the incorrect track sequence in an album, but we don’t consider the fact that there’s a world of context and additional information hidden behind the songs and albums we listen to every day. That context is entirely invisible to us because it’s not mass-market enough for a music streaming service. There have been small updates on this front lately1, but by and large, credits and additional track information are still very much ignored by the streaming industry. And if you ask me, that’s a shame.

This is why I instantly fell in love with MusicSmart, the latest utility by Marcos Antonio Tanaka, developer of MusicHarbor (another favorite music app of mine). MusicSmart, which is a $1.99 paid upfront utility, revolves around a single feature: showing you credits and additional details for albums and songs available in your local music library or Apple Music’s online catalog.

There are two parts to MusicSmart, but if you’re anything like me, you’re mostly going to be using the app as an extension for Apple Music in the share sheet.

The main MusicSmart app displays, as of version 1.0 released today, a list of all the albums contained in your music library. This part of the app does not require an Apple Music subscription: as along as an album is available in your library, MusicSmart will see it and allow you to browse additional details for it. When you select an album, you’ll be presented with MusicSmart’s detail view, which is the core feature of the app: in this screen, you’ll find a high-resolution artwork for the selected album (tap it to enlarge it), a track-by-track breakdown, and more details about the selected artist in a segmented control at the top of the page. 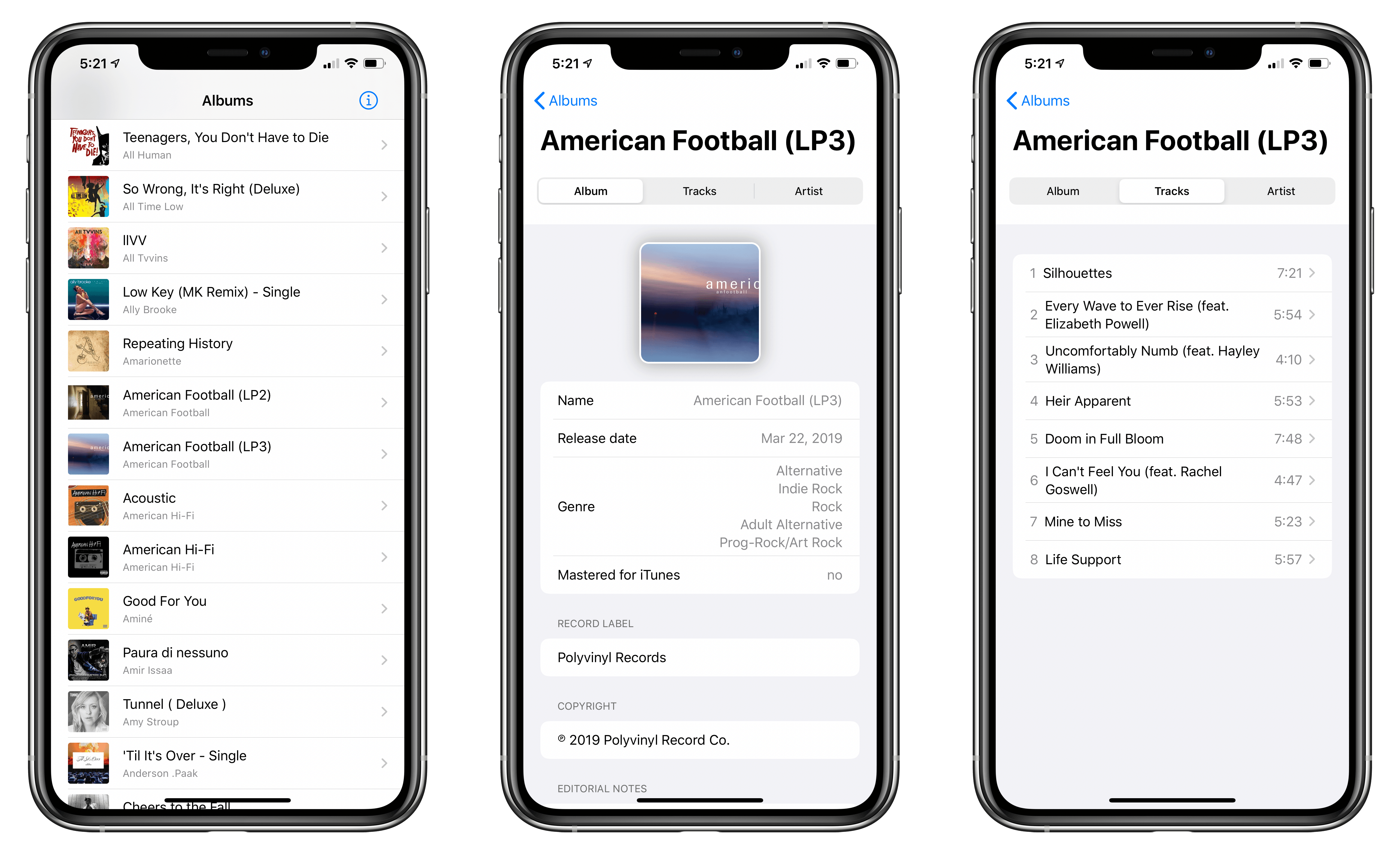 You can use MusicSmart like this, opening the app to scroll through albums you’ve saved, but its usefulness is hindered by the lack of flexibility in this mode. For starters, there’s no search feature in the app yet, so you can only scroll albums sorted by artist in alphabetical order; there’s no alphabetical scrubber on the right side of the list either, so you can only scroll without being able to quickly jump to a specific letter. Furthermore, ‘Albums’ is the only available view: in future updates to the app, in addition to search and sorting options, I’d like to see the option to browse my music library by artists and songs as well.

Where MusicSmart absolutely shines – and where, I believe, it shows modern music services how credits and additional details can become part of the experience – is the extension, which you can use inside Apple’s Music app for any track from Apple Music. As long as a song being shared via the share sheet comes from the Apple Music catalog2, you can share any song from anywhere in Apple Music to MusicSmart’s extension, wait a couple seconds, and the app will pop up a screen with details for the selected album, tracks contained in it, and selected artist.

Here’s the amazing part – the “aha” moment that brought back the same feelings I had as a kid when reading through liner notes: in the Tracks section, you can tap any of the listed songs to view detailed credits for the selected song. These go beyond the standard “written by” credits you see in Apple Music: MusicSmart lists engineers (including mixing, mastering, and assistant engineers), producers, and even the name of the label and studio where the song was mastered. But there’s more: MusicSmart can show you the names of all the artists credited for the creation of a song even if they’re not core members of a band, including backing vocalists, percussionists, keyboard players, saxophonists – you name it. If a music video has been released for the selected track, the video director’s name will be listed by MusicSmart too. 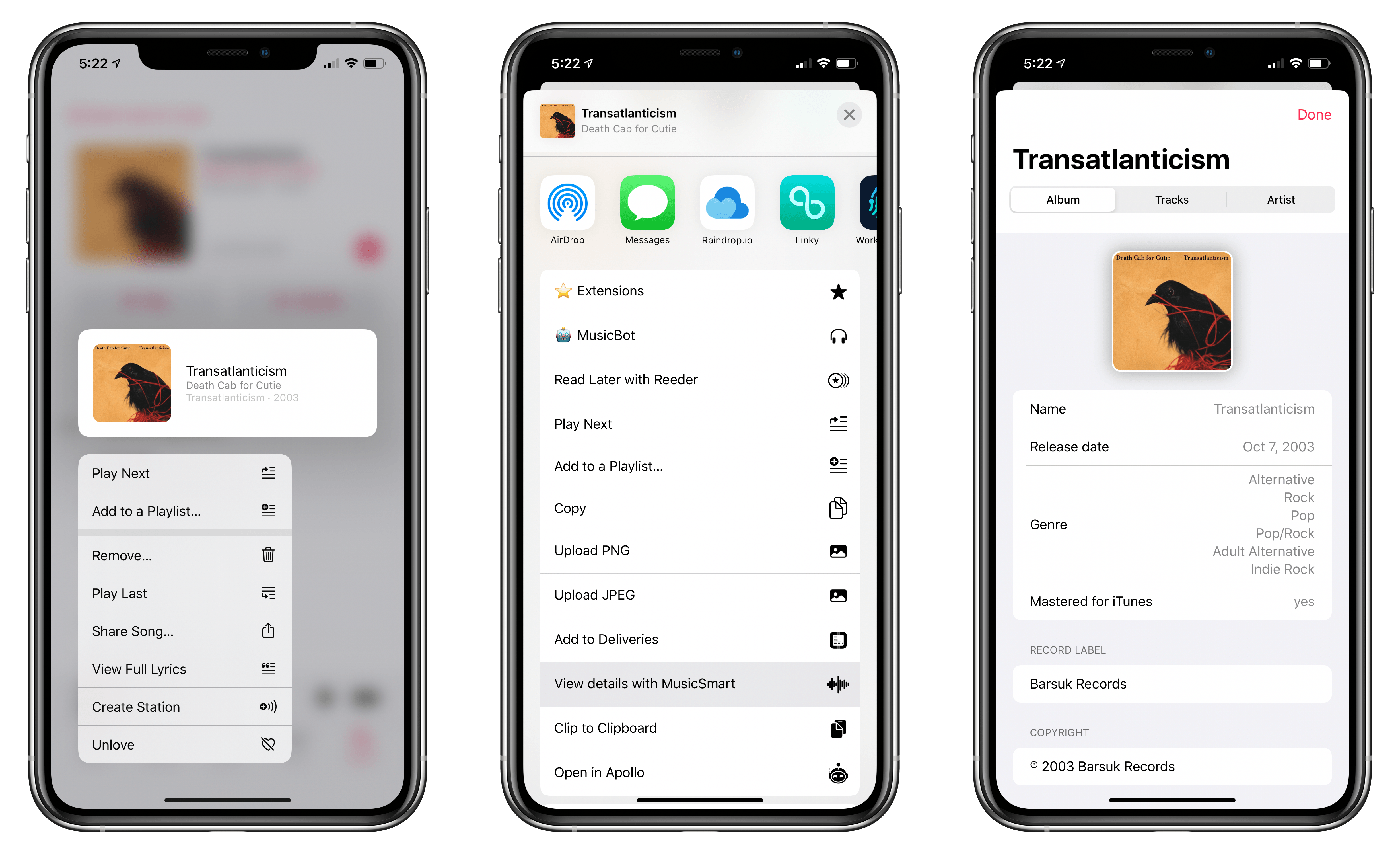 Sharing an album from Apple Music to the MusicSmart extension. 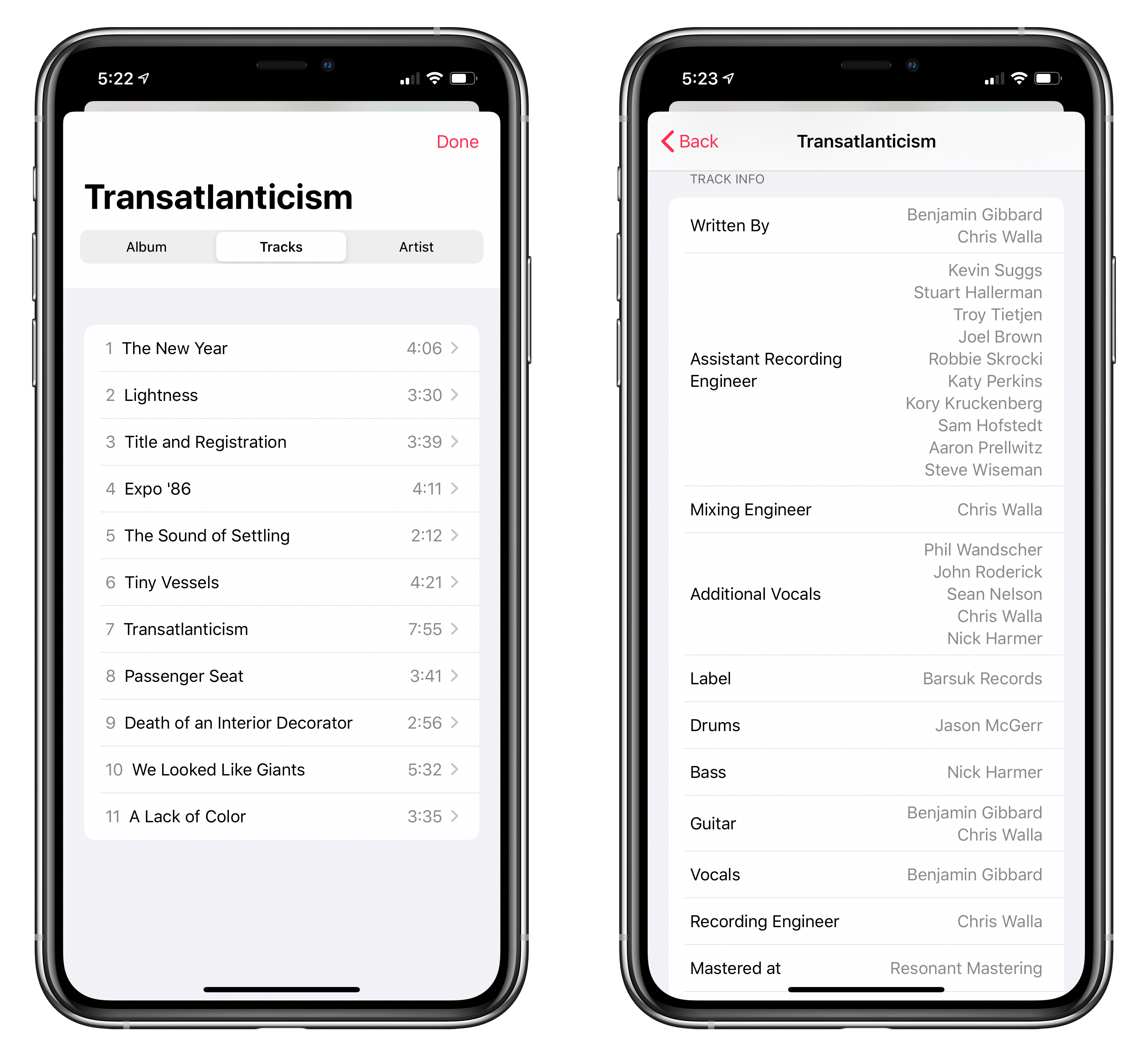 This amount of detail is incredible in its own right, and, personally speaking, it makes me happy to see that someone else still cares about credits and wanted to write an app for them. The ability to learn the names of people who played an important role in the making of my favorite songs has already led to fascinating discoveries I wouldn’t have made with Apple Music alone. For example, I learned that The 1975 have been working with the same saxophonist for years now (you can follow John Waugh here) and that Rachel Haden, credited for backing vocals in Jimmy Eat World’s song All The Way from last year, also did backing vocals for the band all the way back in 2001 for Bleed American. I won’t blame you if you don’t care about these kinds of things, and it’s perfectly fine to enjoy music without credits; however, if you do care – if you also see the beauty of learning about the people who make music and have been mastering their craft for decades – I don’t think I need to say anything else about MusicSmart at this point.

Except I do have more to say about the app. By relying on multiple online sources and databases (including Genius, TheAudioDB, and MusicBrainz in addition to Apple Music), MusicSmart can go beyond song credits to accomplish something I’ve always wanted to exist: the app can tell you which songs are used as samples in a specific song, what the interpolations are, and where the song has been sampled, covered, or remixed. At the top of the page, MusicSmart also includes a description field with trivia and other interesting facts about the selected song. 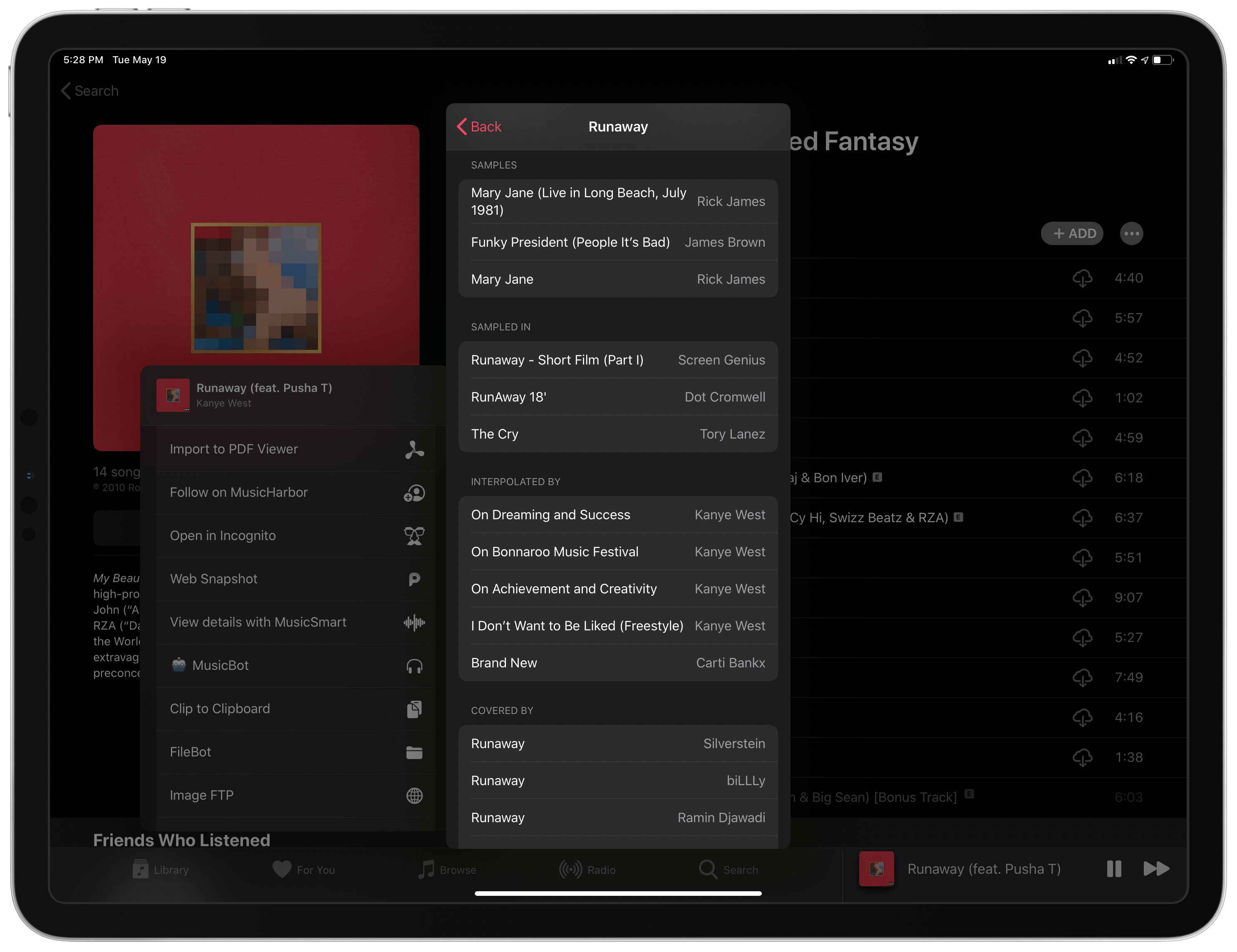 A detailed breakdown of samples for an amazing song from one of the greatest hip hop albums of all time.

I can’t tell you how many times I’ve heard a song and thought it sampled something else but couldn’t put my finger on what, exactly. With MusicSmart, I’ve been able to confirm that, in addition to Nina Simone’s Strange Fruit, Kanye West’s Blood on the Leaves3 also included a sample of TNGHT’s R U Ready, which I didn’t know in 2013 when Blood on the Leaves came out. Another example: my girlfriend and I were watching TV the other day, and we saw the music video for Donna Summer’s 1975 hit Love to Love You Baby. I couldn’t remember the title of the Beyoncé song that sampled Donna Summer’s; all it took me to figure it out was to search for Love to Love You Baby in Apple Music, share it with MusicSmart, and find Beyoncé’s Naughty Girl in the list of songs that sampled the original.

The list of examples could go on, but I think I’ve made my point. I’ve been covering apps for over a decade now, and accepting the reality that it’s now rarer to find unique, groundbreaking ideas has become part of the job. Every once in a while, however, a new app comes along and upends my expectations with features and details I’d never seen before, making me wonder how nobody else had previously thought of making the same app. That’s the best kind of innovation in my opinion, and MusicSmart fits perfectly within that category of apps.

If you care about the people who make music and the unsung heroes behind your favorite songs, MusicSmart is a must-have. This clever $1.99 utility has reignited the same feelings and interest in the art of music I started developing nearly 20 years ago, when my mom bought me my first CD player and I began assembling a CD collection (which is still with me today). MusicSmart instantly shot to the top of my favorite app debuts of the year, and I can’t wait to see where developer Marcos Antonio Tanaka takes it next.

MusicSmart is available at $1.99 on the App Store.