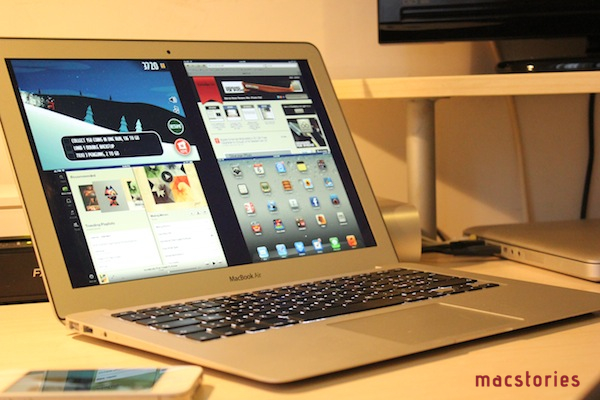 In my review of AirFoil Speakers Touch 3.0, I wrote about AirPlay:

Ever since developers started reverse-engineering the AirPlay protocol that Apple introduced with iOS 4.2 in November 2010, we have seen all kinds of possible implementations of Apple’s streaming technology being ported to a variety of devices, for multiple purposes and scenarios. From tools to turn Macs into AirPlay receivers for audio, video, iOS Mirroring sessions, then a combination of all them, to more or less Apple-approved “AirPlay audio receivers” sold in the App Store, then pulled, then released in Cydia, the past two years have surely been interesting for AirPlay.

The past few months have indeed seen a surge of AirPlay-compatible desktop utilities and apps that take advantage of Apple’s technology for audio and video streaming. From games enhanced with AirPlay to enable new controls and interactions, to several desktop utilities that are now connecting Macs and Apple TVs with AirPlay, there’s plenty of options out there to beam images and audio to devices running iOS or OS X.

AirServer was one of the first applications to bring proper AirPlay support to the Mac, initially only with audio and video, then iOS 5 and Lion, and, around the time Reflection also came out, AirPlay Mirroring. Recently, the AirServer team made some major changes to the way AirServer handles AirPlay Mirroring (our overview) on OS X with multiple iOS devices, so I thought it’d be appropriate to give the app a second try. At the same time, I figured I hadn’t used Reflection much since it came out two months ago; I installed both the latest AirServer and Reflection on my iMac and MacBook Air, and tested multiple iOS devices with AirPlay Mirroring enabled at the same time.

Both AirServer and Reflection now allow you to mirror an iOS device’s screen on your Mac, and both apps let you mirror multiple devices at once with separate channels for audio and video. The photo above, for instance, shows an iPhone 4S and three iPads being mirrored at the same time to OS X Lion with AirServer. While Reflection and AirServer have become very similar utilities, in my tests I have found some important differences that are worth keeping in mind if you plan on using AirPlay Mirroring for more than just demoes to your friends and family members.

While Reflection is capable of turning your Mac into an AirPlay audio receiver (without any video) in spite of the app’s main focus on Mirroring, AirServer is clearly a more complete solution for all kinds of AirPlay streams with dedicated features for audio, video, and Mirroring. For instance, while Reflection will play your iOS audio on the Mac, AirServer will do the same, but it will also highlight the menubar icon to show that audio is being sent, and it will try to display a Growl notification. This is especially nice for apps that send data alongside the AirPlay stream, such as Rdio for iOS, which sends an artist’s information and cover art alongside audio.

Reflection supports audio, but AirServer has a dedicated preference panel for audio settings, as well as a standalone video player. 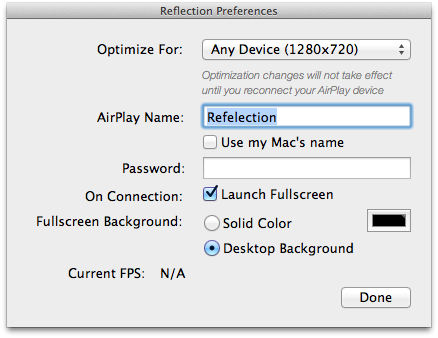 When it comes to Mirroring, Reflection stands out for its “app approach” – Reflection runs as a normal app in your Dock; to configure AirPlay Mirroring, you open the app’s Preferences. Here, Reflection lets you choose between five different resolutions, set an AirPlay name, a password, and settings for full-screen mode. You can choose a solid color as fullscreen background, or use the system’s one. 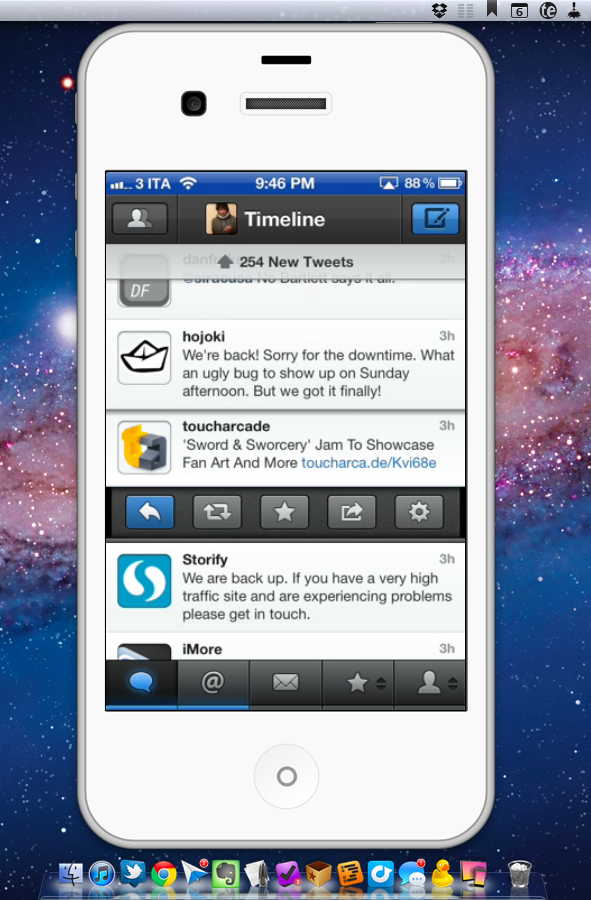 While mirroring, you can drag Reflection’s window with the cursor, and enter fullscreen mode with a keyboard shortcut. Reflection comes with an integrated record functionality to capture a .mov file of your device’s screen – an option that works well with the (also integrated) option to show black/white iOS device frames around the AirPlay Mirroring video stream. iPhones and iPads are automatically recognized, but unfortunately the app doesn’t have an iPad 2 hardware frame. Overall, performances with a single AirPlay Mirroring session have stayed the same since my review. 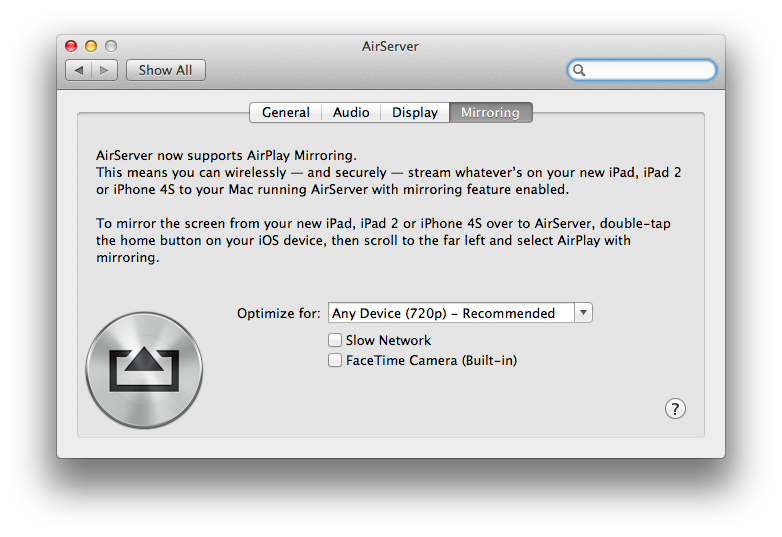 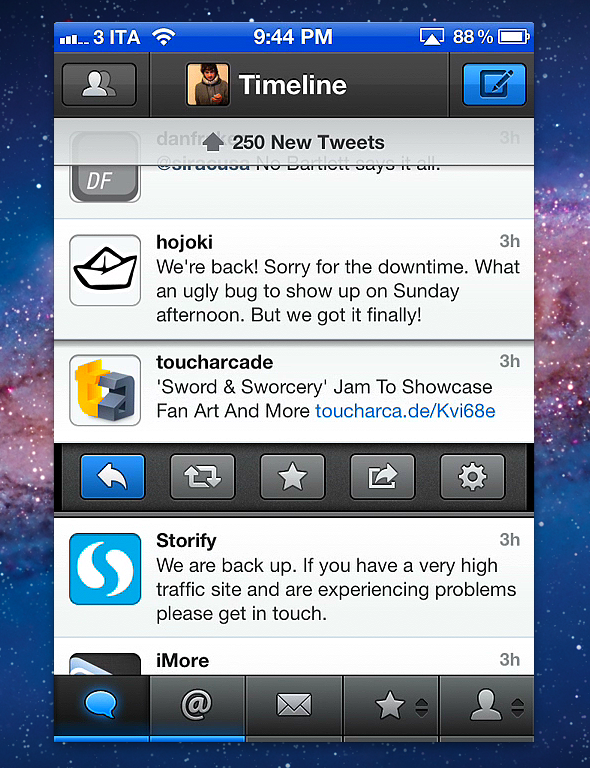 On the other hand, AirServer has two preference panels to adjust AirPlay Mirroring’s behavior: you can tell the app to send a device’s screen to a specific display (something Reflection is lacking), which means you could, in theory, mirror an iOS device through AirServer directly to an iPad running Air Display. That’s in theory, as once I tested such possibility, I found out video wasn’t working on Air Display (I have no idea what’s going on technically, but I assume some video transcoding gets lost in the process of sending data back to Air Display). Furthermore, AirServer comes with two options to automatically adjust AirPlay Mirroring for slow networks (the app will decrease the overall image quality) and display the built-in FaceTime camera alongside mirrored devices. I have no use for FaceTime alongside AirPlay Mirroring, but I imagine it could work as a way to give presentations on stage with a Mac. 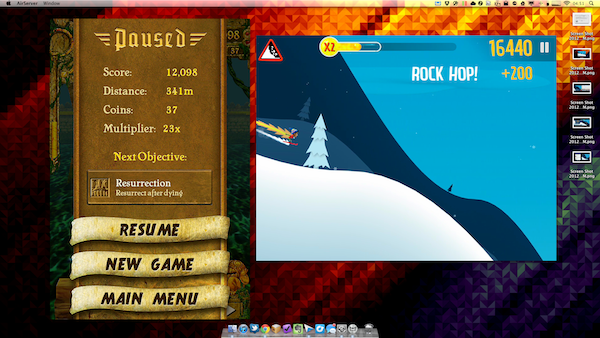 In mirroring two, three, and four devices at once to my Macs, I found AirServer and Reflection to be comparable in terms of performances and image quality. There are always some artifacts (in terms of sharpness and color reproduction) when iOS is mirrored to a Mac (as a reminder, something that Apple isn’t officially supporting) and I experienced some slowdowns on my less-than-perfect wireless home network; yet in spite of my network’s flaws, both AirServer and Reflection allowed me to play Ski Safari and Temple Run side-by-side without any noticeable lags that negatively impacted the experience. Things obviously got more complicated when I connected four devices at once to a single Mac, yet even after some initial hiccups due to orientation adjustments, even those four devices managed to run decently on my Mac’s display.

There are some implementation details that made me prefer AirServer’s solid all-in-one solution. In my tests, whilst capable of handling multiple streams efficiently, Reflection crashed on a couple of occasions; other times, Reflection also incorrectly forwarded video and audio streams to AirServer. I did not experience a single crash with AirServer – not even with Real Racing 2, Ski Safari, Tweetbot, and Safari being mirrored at once – and the app never confused its AirPlay receiver for Reflection’s. In terms of frames per second and graphic performances, both apps handled four devices similarly, with my wireless network being the primary reason behind occasional drops in frame rate and sound.

I do like, however, how Reflection handles the animation of multiple devices connecting to a Mac. Reflection gracefully slides and expands iPhones and iPads automatically; AirServer is a little rough from this standpoint, with slow animations for devices that connect to the same Mac, especially when a device changes its orientation. Both Reflection and AirServer support full-screen mode with devices running side-by-side, but you can also decide to display AirPlay Mirroring on top of your desktop. 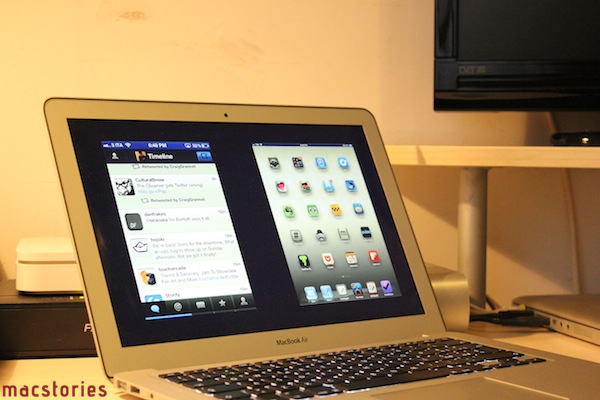 Whilst simpler in terms of animations, I found AirServer to be more efficient at automatically placing mirrored screens on a grid. I don’t know if it’s a design choice or a bug, but Reflection is unable to automatically put mirrored iPhones and iPads on a virtual grid like AirServer does. Often, I ended up with the layout pictured in the screenshots below. AirServer, on the other hand, always respected the grid layout and automatically adjusted (in seconds) to two, three, or four devices connected at once. 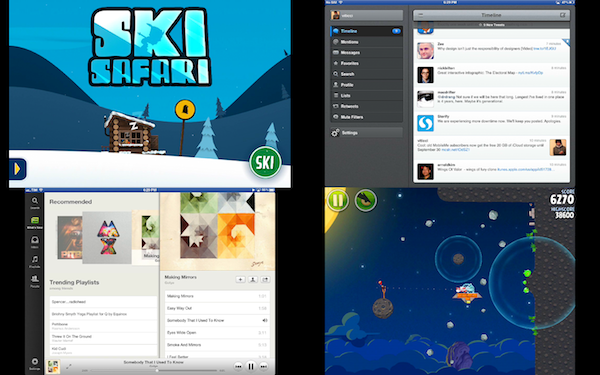 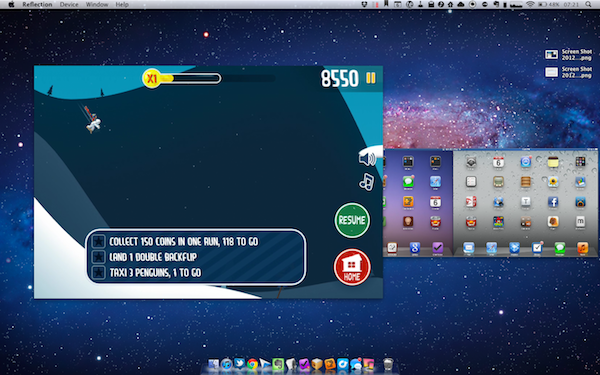 While testing my iOS devices with AirServer and Reflection, I asked myself whether the average user would ever need to know which app is the best at handling four simultaneous connections – something that, admittedly, is more of a benchmark than real-life criteria when it comes to evaluating these apps. While I believe being able to run four iOS games (I couldn’t test with more iOS devices) on a Mac’s screen is nothing more than a visually intriguing experiment, I also think there could be some interesting use cases for AirPlay Mirroring from multiple devices. For one, features like Firemint’s Party Play are just perfect for an iMac’s bigger screen running AirServer or Reflection; for people looking to enrich their on-stage presentations with demoes and comparisons, being able to mirror two iPads at once opens the door to exciting possibilities (imagine comparing websites and apps from separate iPads, without having to use a Mac’s software during the presentation). With a reliable wireless network and a decent OS X computer (I used my mid-2010 iMac and mid-2011 MacBook Air for testing), AirPlay Mirroring with multiple iOS devices could be something worth playing with.

Both Reflection and AirServer have time-limited free trials, and both apps are sold at $14.99 for a single-user license. My personal recommendation goes to AirServer, which, ultimately, I found to be more reliable and efficient at handing simultaneous AirPlay Mirroring connections on my Mac.