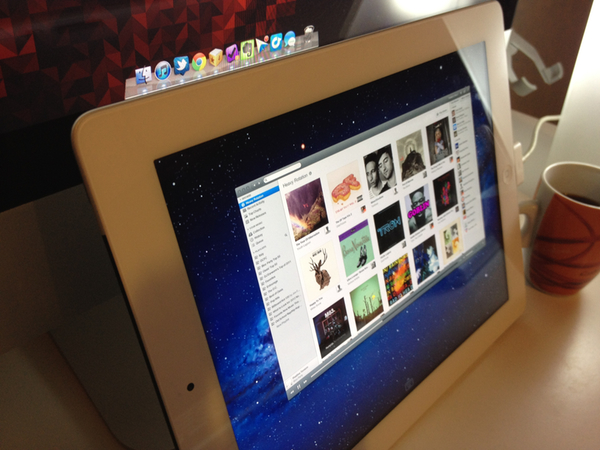 Announced last week, Avatron’s popular utility Air Display, a $9.99 app that can turn any iOS device into an external display for a Mac or PC, has been updated today to include support for two major new features and technical achievements: HiDPI mode and Retina graphics. Meant to be enjoyed on the new iPad’s Retina display, Air Display 1.6 requires the installation of a desktop application that will handle the wireless connection between Lion and the iOS app.

Once installed, Air Display Connect on the Mac will allow you to easily select the device you want to turn into an external monitor. For the new iPad’s display (and Retina iOS devices in general, but of course the app gives its best results on the iPad), Avatron has enabled support for high resolutions, although an option is present to render items at non-Retina resolutions as well. The Retina display’s tightly packed pixels have also allowed Avatron to use HiDPI mode – a hidden feature of Lion which draws element on screen at double the size – in a meaningful and gorgeous-looking way. 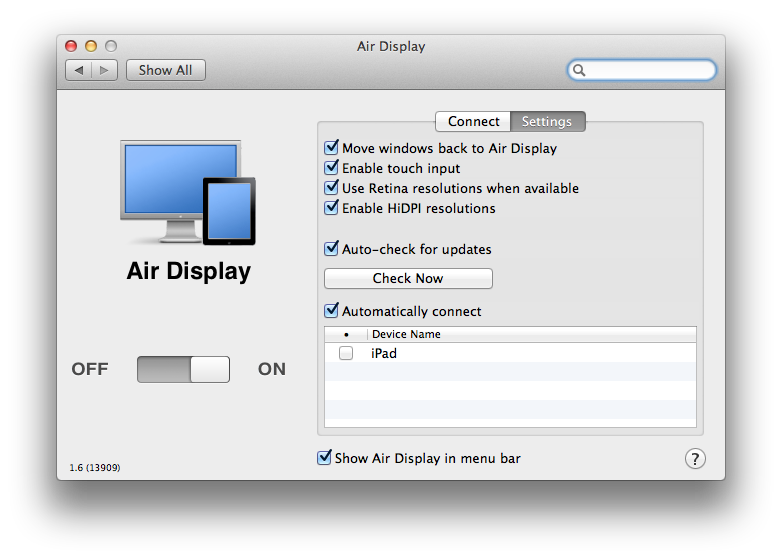 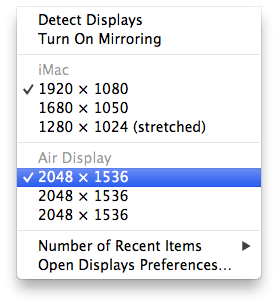 Because HiDPI mode simply produces large images on a “non-Retina” device (by drawing larger elements on screen, HiDPI would need a high-resolution display to make sure an application window’s physical size isn’t comically large), Avatron thought that the iPad’s 2048x1536 pixels would make sense for such implementation. And indeed, once active, Air Display’s HiDPI mode on a Retina iPad makes for a beautiful experience to look at (and surprisingly decent in terms of performances on my not-so-amazing home network): pixels are crisp, text is insanely legible, large windows from an iMac’s main display become smaller, but sharper when migrated to Air Display.

In my tests, I noticed the app wouldn’t display super high-res graphics only when dragging windows around with the mouse, but I assume that’s also related to the connection refreshing the external, wireless display (in this version, frame rate and image quality have also been improved – I didn’t notice any visible lag or compression going on, possibly thanks to the app’s multiple optimizations in this area). When windows are still, you’ll be able to appreciate Air Display HiDPI on Retina is all its glory. New features aside, Air Display keeps its existing set of functionalities intact, letting you easily move windows around, activate touch input in the app’s Settings, and writing directly from the iPad if necessary through iOS’ soft keyboard.

At $9.99, Air Display 1.6 delivers an incredible image quality on the third-generation iPad, and I recommend you check it out if you own a Retina iPad and have been looking for a way to leverage the device’s display for Mac OS X Lion’s HiDPI mode.

Update: In my tests, I have noticed that in order to enable and disable HiDPI mode Air Display installs a “helper” tool that requires a log out when you decide to activate or deactivate HiDPI. It is my basic understanding – though I still have to contact Avatron about this – that Air Display can enable HiDPI mode on the iPad’s Retina display alone, leaving a Mac’s default resolution unchanged. When moving windows between the iPad’s HiDPI display and my Mac’s non-HiDPI screen (set at 1920x1080 pixels), I noticed the app had to “resize” the windows that were enlarged for HiDPI to fit the regular screen. I have included a series of screenshots below, and I’ll update this post with official details from Avatron regarding the behavior of “Retina resolutions” and “HiDPI” settings.

- Moving the Rdio window back to the main screen

Update #2: HiDPI mode needs to be manually enabled in the Display preferences even if Air Display is set to “on”. As also noted by Wayne Sang, only some Apple apps and system resources/controls seem to take advantage of HiDPI mode right now. Below, two examples of Apple apps running HiDPI mode, versus non-optimized apps (Chrome and Rdio).