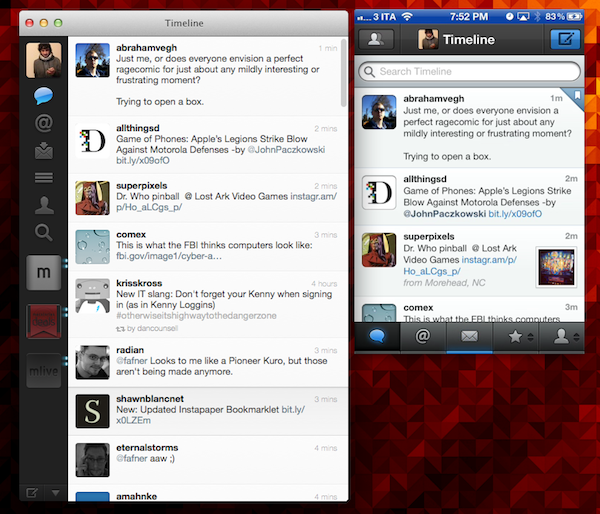 I was reminded by this TUAW article last night that a simple solution to enable AirPlay Mirroring from iOS to OS X didn’t exist – this is something I’ve been fantasizing about since the original iOS 5 came out and the iPhone 4S further cemented my belief that AirPlay Mirroring is an amazing solution to project apps and games on a bigger screen. Fortunately, in the same article TUAW’s Erica Sadun pointed to Reflection, a new app by developer David Stanfill (the same guy behind AirParrot), which enables just that: it turns your Mac into an AirPlay receiver for Mirroring, not just audio and video playback as other tools (like AirServer) do.

I bought Reflection right away because, like I said, this is something I’ve been looking forward to, and whilst I don’t think this method can replace higher quality HDMI connections just yet, it sure provides a handy way of getting an iOS device’s screen onto your Mac. Sort of the opposite of apps like Skala Preview, only working natively with iOS 5 and a desktop app that handles the incoming video stream.

Speaking of which, quality of WiFi and video can obviously become a major deal-breaker for many – especially developers or bloggers who are looking at Reflection as a way to record iOS screencasts and demoes with the comfort of a Mac and the tools it makes available for video recording and editing. Now, I’m no video expert, but I’m fairly certain some sort of lossy compression is applied when mirroring an iOS device to the Mac through Reflection – but I’ve only spotted this loss in quality (example) a few times. Once installed, Reflection allows you to set some default settings for all incoming connections: you can set a receiver’s name, force full-screen mode (Lion’s native one) on all new Mirroring sessions, and optimize the app for different device types. These include standard iPhone resolution (320x480), Retina iPhone (640x960), iPad (1024x768), Hi-Res (1920x1080) and Any Device (1280x720). Similarly, devices can be mirrored inside a “frame”, and you’re also given the option to force orientations with keyboard shortcuts – unfortunately, the frames provided in Reflection don’t look nearly as great as ScreenTaker’s, so here’s to hoping for better graphics in a future update.

As I mentioned above, performances haven’t really been an issue with Reflection and my iPhone 4S/iPad 2 on the two local networks I tested the app with (powered by an AirPort Extreme and AirPort Express), but I have some points to make in regards to usage and why you should try or avoid Reflection.

As you can tell, I’m impressed by Reflection. It is already a very stable and responsive “hack” to get AirPlay Mirroring on the Mac, and I’m sure the few bugs I’ve encountered will be addressed soon with an update (as well as performances in general). Reflection won’t give you 100% reliable color reproduction and pixel state-of-the-art, but if you’ve been looking for a way to “just get” Mirroring on OS X, I can’t think of a single reason why you shouldn’t (at least) try Reflection.