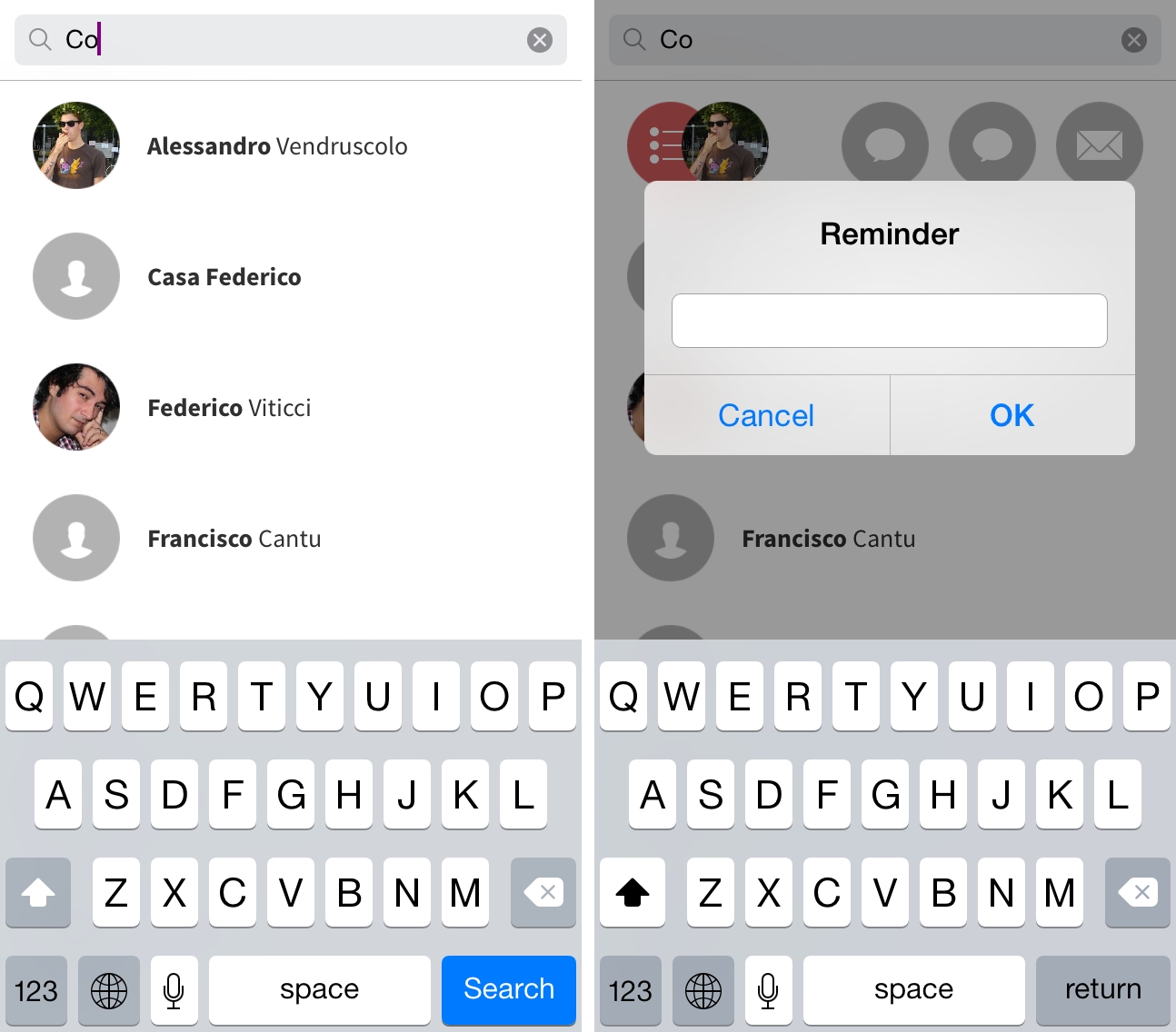 Developed by Samir Ghobril, Mingle for iPhone combines aspects of the iOS Contacts app and action launchers such as Drafts and Launch Center Pro to let you quickly launch actions for individual contacts through a swipe gesture.

Mingle starts by displaying a list of your iPhone contacts with a search bar at the top. Unlike other third-party contact management apps, contacts in Mingle can’t be tapped to reveal more information in a separate screen – Mingle revolves around the idea of finding a contact entry and launching an action associated to it. To launch an action, grab a contact’s profile picture and swipe to the right: four action icons will appear, and as you drag the photo over an action it’ll be highlighted and bounce with a cute animation. Release the contact, and the action will launch.

Mingle’s actions are based on system features and URL schemes for third-party apps. Actions aren’t customizable on a per-contact basis: once configured in the Settings (revealed by swiping left on the main screen), the same set of four actions will be available for every contact you decide to pull-and-release in Mingle. System actions cover the basics and include services like “Call with Phone” and “Email In-App”, while pre-installed third-party actions go from “Open Contact’s Profile in Twitter/Tweetbot” to “Reminder with Contact in Fantastical 2”. 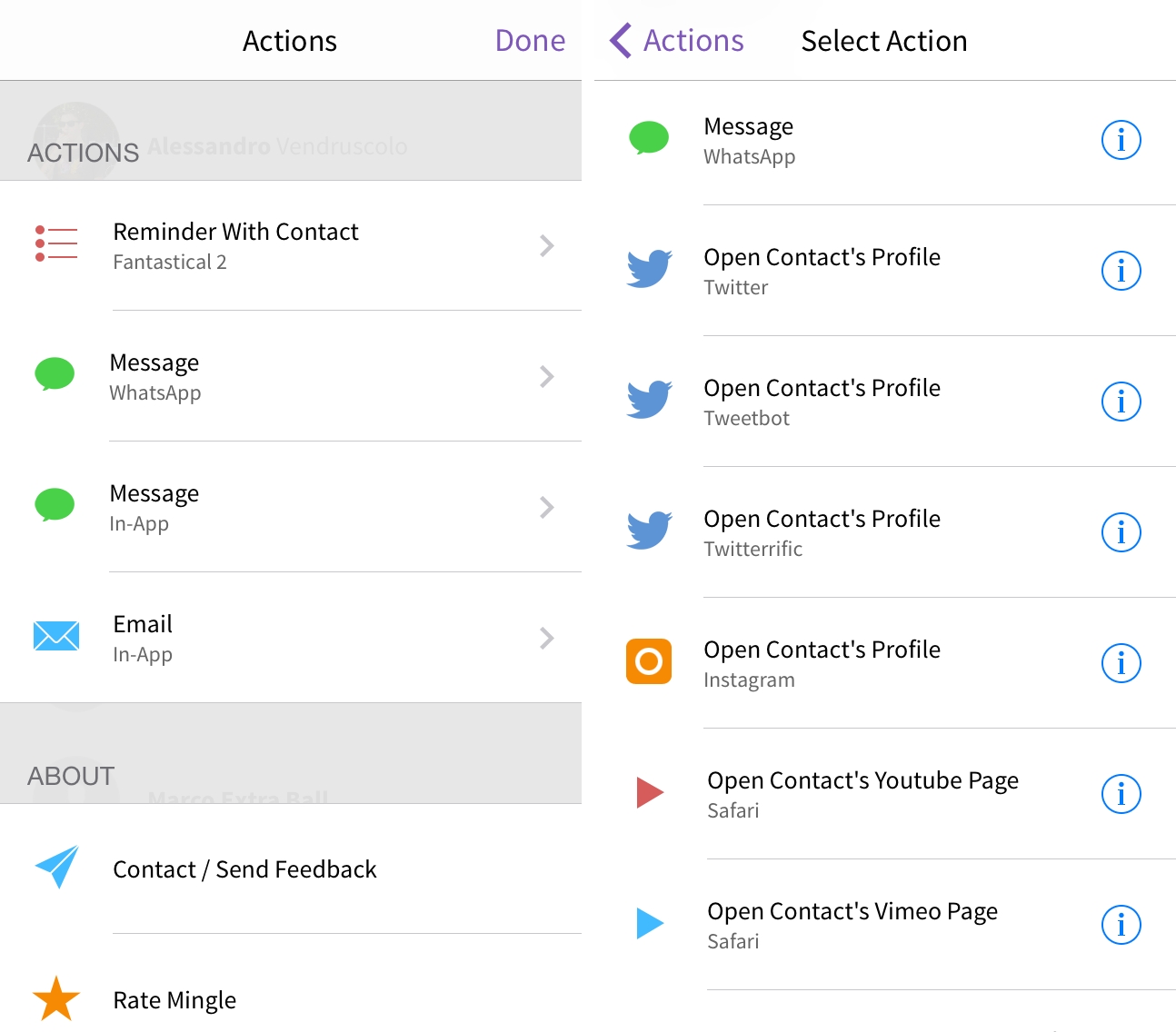 It’s a good selection of built-in sharing services, but it doesn’t come with the same amount of options seen in Drafts or Launch Center Pro; the lack of depth in Mingle’s Select Action screen is mitigated by a “Custom action” menu that, as you can imagine, lets you set up an action from scratch using URL schemes and placeholder tags.

While Mingle has been clearly influenced by the work of Agile Tortoise and Contrast, the features that have been built specifically for contacts set it apart from its inspirations as they allow the app to launch actions that wouldn’t be possible (or as easy) in Drafts and Launch Center Pro.

Mingle can display keyboard prompts and assign custom icons to actions, but neither of these features is nearly as advanced or flexible as Launch Center Pro (the icon selection is limited and keyboard prompts are extremely basic). As soon as you open the Tag Help screen, however, you’ll see the advantage of Mingle’s focus on contact information: there are special placeholder tags for a contact’s phone number, email address, IM service name, social network name, and even the unique ID (ABID) used by WhatsApp. 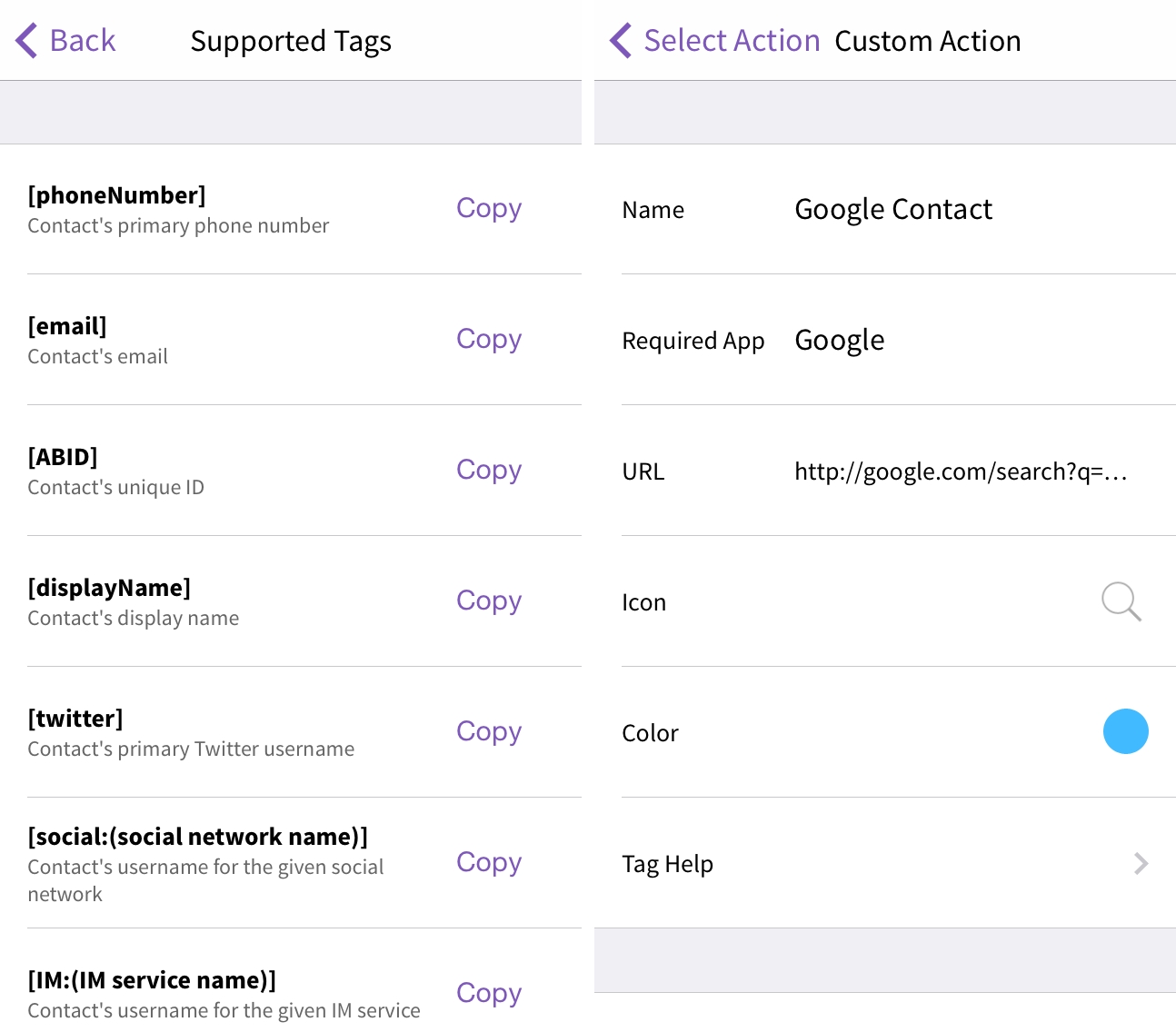 In my tests, I created a sharing action for WhatsApp using Mingle’s ABID placeholder tag, and it worked perfectly out of the box with no scripting necessary. I don’t have a rich address book full of contact information, but Mingle worked reliably for contacts that had Twitter usernames and URLs associated with them.

Taken individually, the ideas behind Mingle aren’t completely new and Ghoblir has a long road ahead to achieve the versatility and user customization found in other iOS action launchers and Contacts clients. I would like to see more icon and color options (it’s easy to confuse Messages actions with WhatsApp shortcuts) and the app lacks any sort of Favorites or Groups functionality to quickly access your most used contacts. In terms of interaction, Mingle could use an alphabetical scrubber to quickly jump to a specific letter in your contact list, and a dark theme could help those who dislike plain white backgrounds on iOS 7.

Flaws of a 1.0 product don’t take anything away from the fact that Mingle is – given the current limitations of iOS’ inter-app communication – a good idea, nicely executed. If you want to set up quick sharing actions for Contacts without learning Launch Center Pro or Pythonista’s Contacts module, Mingle exposes contact fields as placeholder tags that are easy enough to integrate with URL schemes for any app you want. I particularly appreciated Mingle’s integration with WhatsApp and Twitter clients, and I’m looking forward to seeing how the app will evolve in the future.

Mingle is available at $0.99 on the App Store for a limited time.