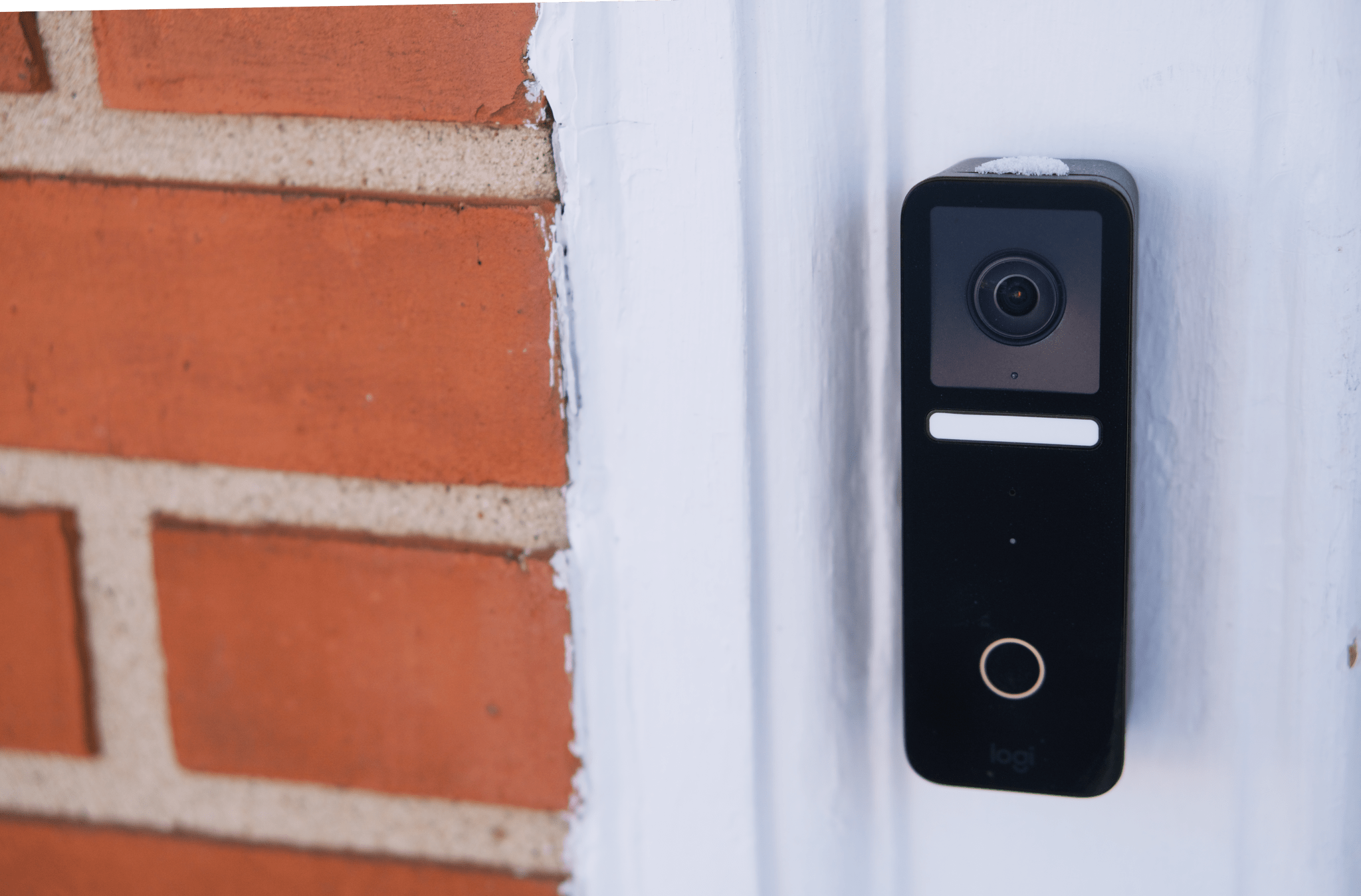 For nearly a year, I had a Logitech Circle View camera perched above the front door of my house, which allowed me to keep an eye out for visitors and deliveries. The wide-angle lens was able to capture my front stoop as well as my yard, providing an excellent perspective on what was happening outside.

That setup worked extremely well. In fact, my two Circle View cameras are so reliable that I had begun thinking about replacing a second outdoor camera from Canary that I was using in the back yard. That’s why when Logitech got in touch to see if I wanted to try its new Circle View Doorbell, I jumped at the chance. I figured that if it worked out, I could migrate the Circle View to the back yard. I was also intrigued by some unique features of Logitech’s doorbell and eager to see how well they worked in practice. I haven’t been disappointed. The Circle View Doorbell uses your existing doorbell wiring to power the device. That has the advantage of supplying power, so the device doesn’t need a battery, but initially, it also concerned me. My house was built in 1940, and although it has been rewired, I knew the doorbell hardware was probably at least 50 or 60 years old.

Two things got me over my initial worries, though. First, Logitech has a step-by-step questionnaire to determine compatibility. I took the quiz and was fairly certain the Logitech doorbell would work. Second, Logitech offers a professional installation option. Logitech has partnered with HelloTech to offer a bundle that includes the Circle View Doorbell and installation for $299.99, which is $100 more than the doorbell by itself. For that extra $100, someone will visit your house and take care of the installation. Between my old doorbell hardware and winter descending upon the Chicago area, I was glad to take the easy route and let someone else install the doorbell. The installation took about 45 minutes, which involved replacing my existing doorbell with the Logitech one and installing a small chime box that sits out of sight on the top of the existing chime in my house. The Circle View Doorbell has a sleek, elegant look that fits with a variety of homes and narrow door jambs.

The doorbell itself is a narrow black rectangle that sticks out from the door jam just over one inch (28mm). The camera hardware sits at the top with an LED light bar just below it that you can activate to light the area within six feet of the device. At the bottom is a button ringed with a light to indicate where someone should press. The ring around the button isn’t super bright, but it’s still very noticeable and seems to have resulted in more people pressing it than with our old doorbell, which I appreciate, especially when groceries are delivered and sitting outside.

When someone rings the doorbell, the new Logitech chime sounds inside the house. The sound is different than our old doorbell and unmistakably ‘electronic,’ but it’s a pleasant, clear sound that I like.

Logitech’s Circle View Doorbell is compatible with HomeKit. One of the benefits of that integration is that you’re no longer limited to being notified by the chime when someone rings the doorbell. The device also works with the HomePod, playing a chime on any original HomePod or HomePod mini you own. A video alert that someone is at the door is also displayed on your TV if you’re using an Apple TV. Of course, notifications are available on your iOS devices, Apple Watch, and Mac too, all of which make it hard to miss a visitor or delivery when I’m sitting in my studio listening to music that would have drowned out the sound of my old doorbell. 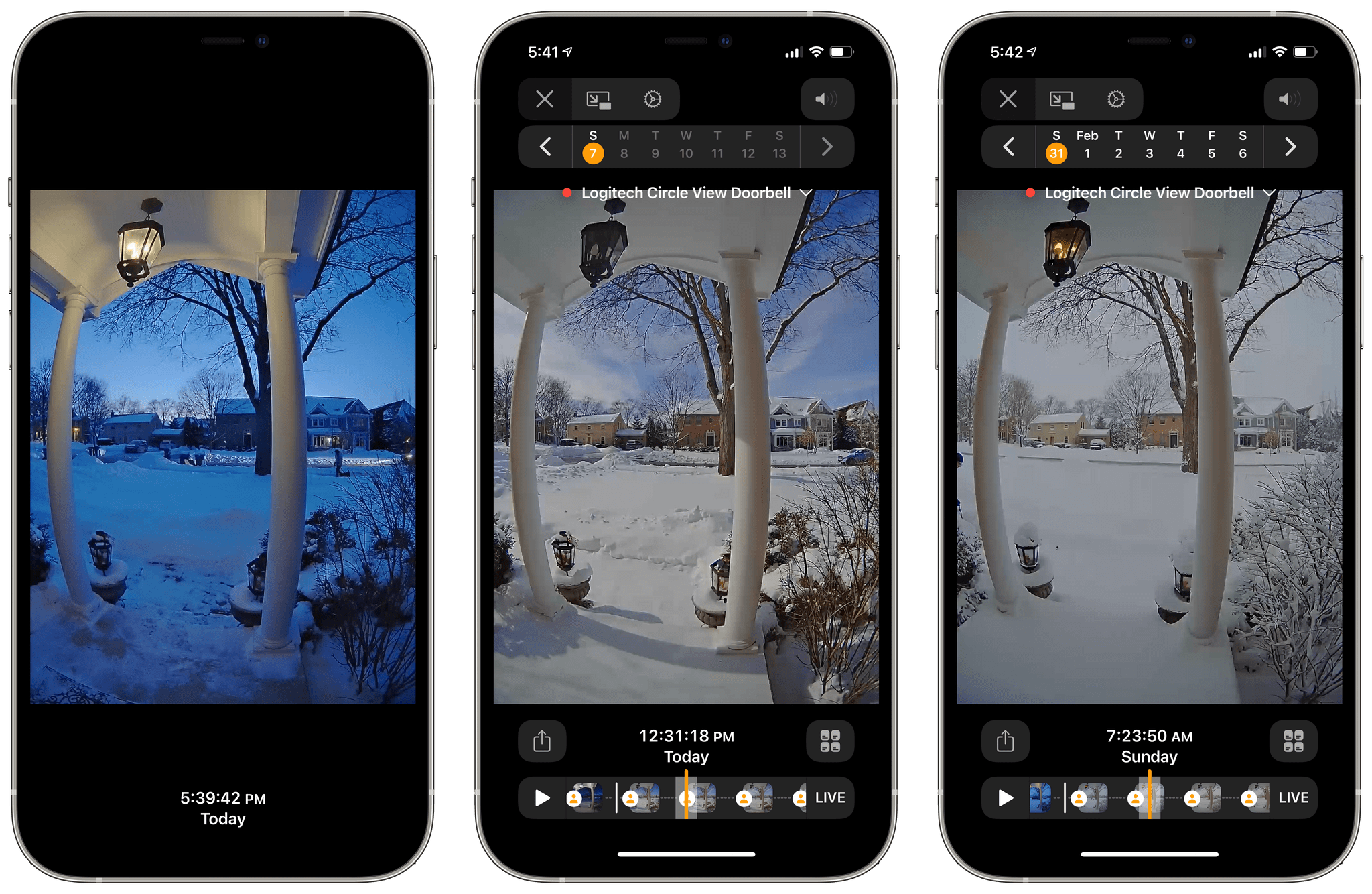 The Circle View Doorbell’s excellent camera allows me to look out upon the frozen suburban tundra at any time of day.

As happy as I’ve been with my existing Circle View cameras, I was pleasantly surprised to find that the Circle View Doorbell takes things up another notch. Since the doorbell was installed in late December, it has been incredibly reliable. Like my past experience with Logitech cameras, the doorbell has stayed connected to the network far more than other cameras I’ve tried. I’ve seen a couple of short offline periods, but they have been few and far between, even though the doorbell is located in a spot that I know has somewhat spotty WiFi. The live video feed comes up more quickly than other cameras I’ve tried too.

The quality of the video feed is excellent. The new doorbell camera streams and records video in HD using HDR that delivers a superior image, even at night when it uses a technology Logitech calls color night vision. The doorbell’s video is recorded in portrait orientation at 1600 x 1200 pixels. As I mentioned, there’s an LED light bar that can be activated to help light the scene too, but the night vision of the Circle View Doorbell is excellent, and the light above our front door has been more than enough, even when dimmed, to provide adequate lighting for the scene. The doorbell also supports two-way audio, so you can speak to anyone at your door.

You don’t get a security camera because you’re looking for stunning, high-resolution video of delivery trucks, but the quality of the Circle View Doorbell over other cameras still makes a difference. Nighttime cameras, including Logitech’s Circle View, usually include a night vision mode, but the scene is effectively black and white. The Circle View Doorbell’s ability to deliver color and greater contrast and resolution than other cameras makes a difference in recognizing what’s happening further away from the camera. In other words, the change is more than cosmetic: the video from the Circle View Doorbell’s camera is simply easier to mentally process at a glance when you open your phone day or night. 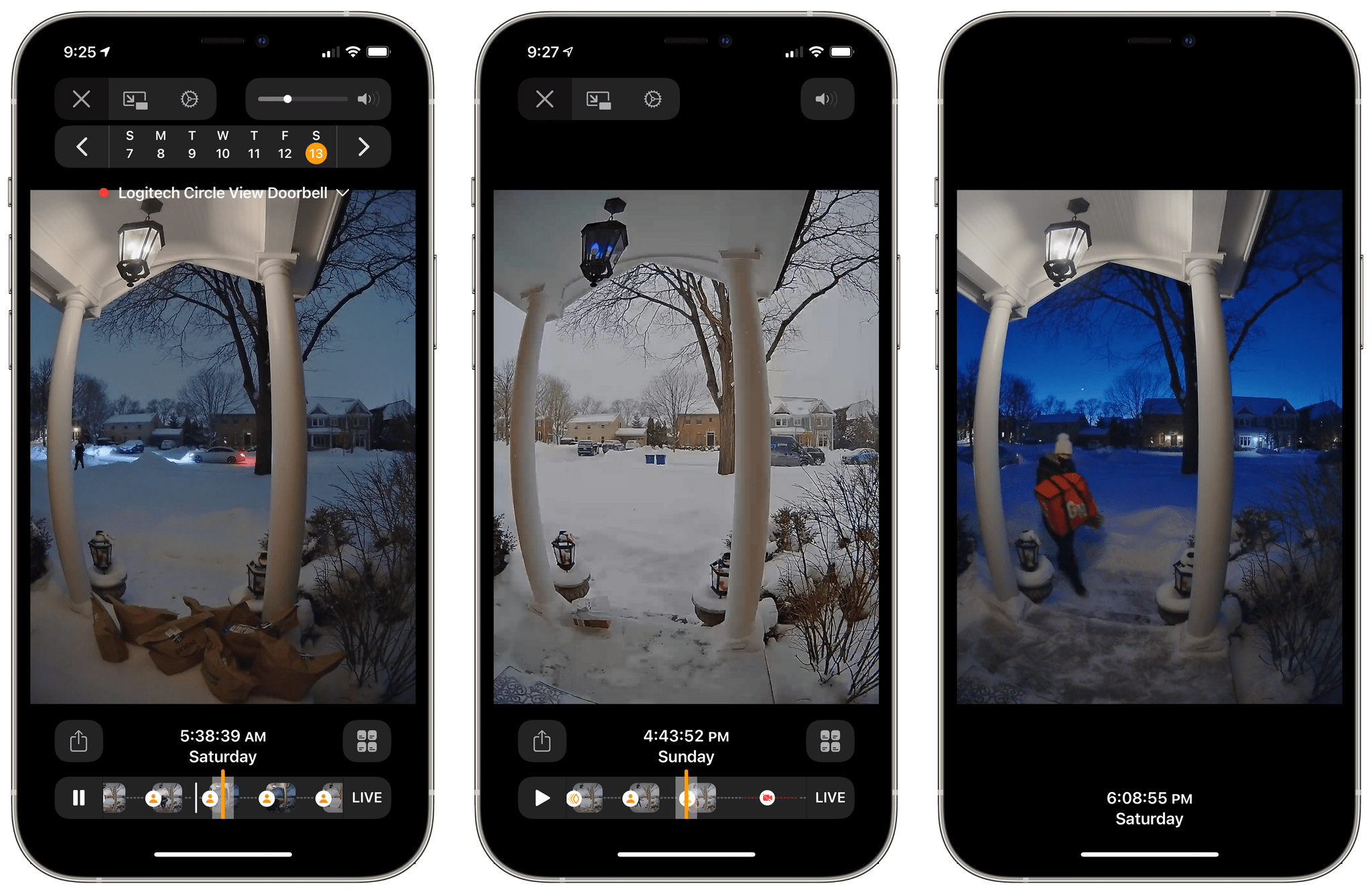 Keeping an eye out for grocery, package, and meal deliveries is by far my most frequent use of the Circle View Doorbell in these stay-at-home times.

As I mentioned above, the Circle View Doorbell is compatible with HomeKit, which includes support for HomeKit Secure Video. With a 200GB iCloud storage plan, you can set up your Circle View Doorbell to record activity for a rolling ten-day period that is encrypted end-to-end and stored in iCloud without counting against your total storage. Users who sign up for a 2TB iCloud plan can connect up to five cameras. Face, animal, and vehicle recognition as well as setting up activity zones are supported too.

HomeKit Secure Video got off to a rocky start, but it has been working well for me since iOS 14 and includes lots of customization options for the Circle View Doorbell.

The Circle View Doorbell’s camera angle is a little narrower than the Circle View camera, but in practice, I haven’t noticed the difference. The doorbell’s camera is still wide enough to cover my entire front yard. The biggest difference has been that my old setup looked directly down at our front stoop, while the doorbell’s camera can’t see immediately in front of the door, which isn’t a problem if people come to the door. However, I can’t always see packages if they are left right up against the house. However, that isn’t as big of an issue as it could have been because the camera picks up the delivery person as they approach the door, so I know to look for a package even if it’s not visible in the camera’s field of view.

The Circle View Doorbell has held up well despite lots of snow and extremely cold temperatures.

The true test of Logitech’s camera came just this past week, though. It’s been snowing almost non-stop for days in Chicago, and the nighttime temperatures have dropped to as low as -15˚F (-26˚C). Despite the incredibly cold temperatures and wet weather, the doorbell has stayed online and operated just as well as when it was warmer.

I really couldn’t be happier with the Logitech Circle View Doorbell. I was already a fan of HomeKit Secure Video, which saw significant improvements with iOS 14, and it worked well with my existing Circle View setup. However, where you can locate those cameras is limited by the availability of an electrical outlet. Hard-wiring the Circle View Doorbell to existing doorbell wiring eliminates the need for an outlet or battery, although it was also wise of Logitech to offer a low-friction installation option. Installation is an added cost, but a significant convenience too.

As well as my previous camera setup worked, the addition of a chime that plays throughout the house over our HomePods, the Apple TV integration, and the added quality of the video captured by the camera have won me over. What I had before worked, but the Circle View Doorbell adds new dimensions to my camera setup’s functionality that makes it superior to a standard security camera.

The Logitech Circle View Doorbell is available directly from Logitech for $199.99, from the Apple Store, and from other retailers. The professional installation bundle adds $100 to the price.