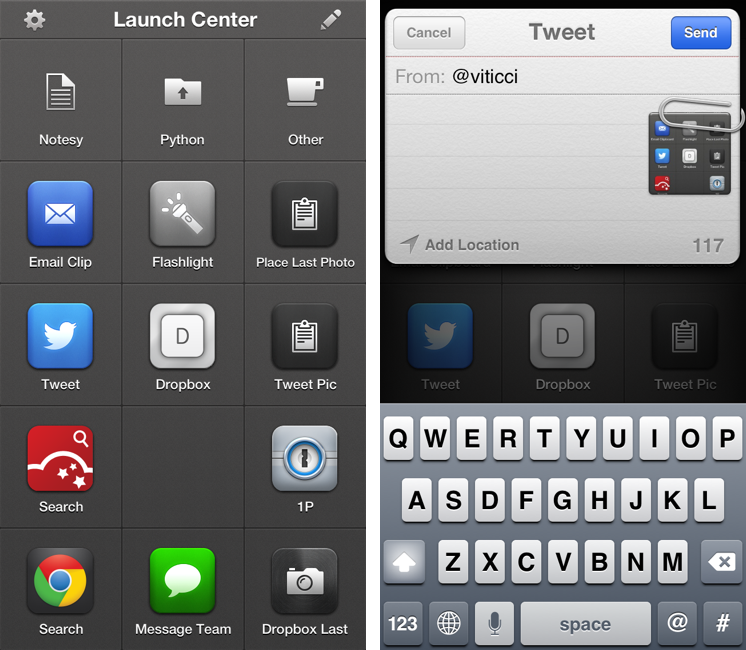 Released in December 2011, App Cubby’s Launch Center re-ignited interest in iOS URL schemes – shortcuts to automate communication between apps and get specific things done faster with less manual tapping and interactions. Its direct sequel, Launch Center Pro, was released in the summer of 2012 and doubled down on the entire idea of automating iOS tasks by providing a “Home screen for your actions” to allow users to better and more visually organize their shortcuts.

I’d start with the Action Composer, which has been completely redesigned in version 1.1. It used to be that, upon creating a new action, Launch Center Pro would offer a single list of system actions and third-party apps that had URL schemes you could use in the app. While simple and straightforward, the way the Action Composer was designed didn’t allow App Cubby to easily showcase new additions or recommended apps, forcing them to tweet new actions or update the documentation on the Launch Center Pro website. 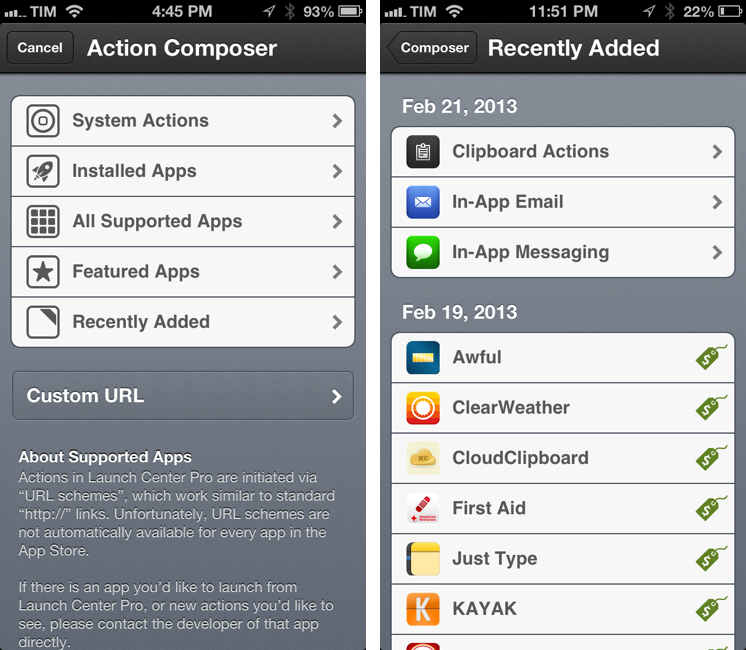 Similar in terms of overall design to Launch Center Pro 1.0, the new sections enabled App Cubby to do a couple of interesting things: for instance, Installed Apps are sorted alphabetically with a search field on top and possibility to open a single app’s detail screen to view all available actions.

The All Supported Apps screen works in the same way, but it comes with (what I assume are) affiliate links to buy apps so that App Cubby will get a small kickback for every sale started from Launch Center Pro. Recently Added will let the developers list additions directly inside the app with a simple server-side update, and, overall, I believe seperating sections from each other makes for a cleaner, easier to understand overview of the possibilities offered by Launch Center Pro.

Launch Center Pro 1.1 comes with support for TextExpander snippet expansion inside URLs. This is a terrific addition in terms of iOS automation possibilities, and something I’ve been looking forward to for months now. Basically, provided you have TextExpander touch installed and “snippet sharing” activated, you’ll be able to build Launch Center Pro actions containing snippet abbreviations, which will be expanded upon launching the action. If this doesn’t sound like a big deal, let me give you a few examples. 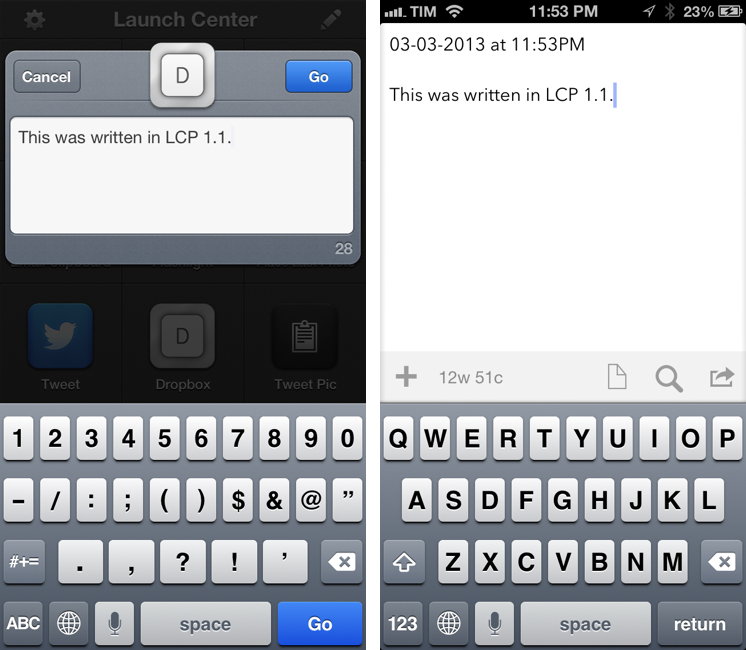 In Drafts, I have an action that appends a string of text to a file in Dropbox. With the new Launch Center Pro, I can insert a snippet – essentially a variable – that will be sent to Drafts alongside the usual “prompt” and expanded in place. So instead of just sending text from Launch Center Pro to Drafts, I can send my date snippet and text by putting the snippet abbreviation in the URL, as shown below.[1]

Snippet support is great in combination with the new in-app email action that doesn’t take you to the Mail app anymore, showing a Mail compose panel inside Launch Center Pro.

Available in the new In-App Email area, you can create actions that do something as simple as showing a blank compose panel or more advanced stuff like pre-defined recipients, subject, and body fields – the latter supporting pre-set text or (another new feature) the last photo taken. Obviously, all these fields support existing Launch Center Pro tags like [clipboard] and [prompt], allowing you to create handy email templates for recurring contacts (there is a contact picker to choose emails when composing actions) or with recurring subjects, all while not having to necessarily type inside the Mail panel. 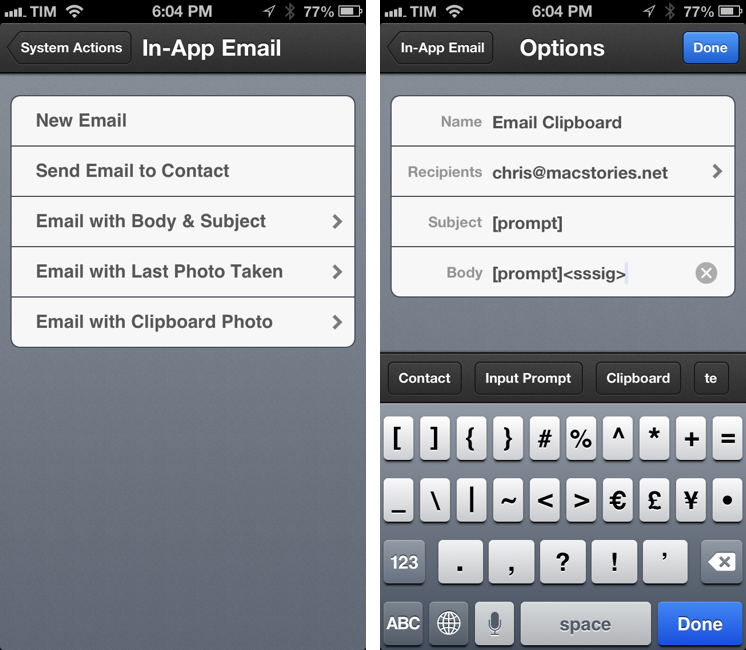 Now think about combining the new in-app Mail actions with snippets, clipboard detection, and last photo taken. For instance, many people use TextExpander to store their email signature, so it makes sense to integrate that in Launch Center Pro. With 1.1, we can build an action that:

This single action, however, is actually made of two distinct new features in Launch Center Pro 1.1: in-app email and the brand new clipboard actions.

Because Launch Center Pro supports x-callback-url, for each of these clipboard actions there is an “and Return” version that will execute the first action and then automatically go to another action. So, as you can guess, you can place a photo in the clipboard and then do other stuff – you get where this is going.

LCP 1.1 supports two ways of sending emails with photos: you can send the Last Photo Taken or “Email with Clipboard Photo”; both of these actions are available in the In-App Email actions under System Actions.

The first, more complex method involves creating an “Email with Clipboard Photo” action and using its URL as the “and Return” in a “Place Last Photo and Return” action.[3]

The advantage is that you can use the Mail action separately to attach a photo you copied that isn’t necessarily the last one you took; the downside is that you’ll likely have two actions.[4]

There is an easier, built-in way that does exactly what we want without having to fiddle with URLs. Head over the email actions and create an “Email Last Photo” one as shown below. Note how I’m using a “sssig” abbreviation for my signature, which triggers a TextExpander snippet. Hit the action, and you’ll get two prompts to type the Subject and the Body, which will be put inside a new email message. The Mail.app wasn’t touched – not even once; and because this is a native iOS feature, you can turn text into rich text, or save the message as a draft. Too bad that you can’t control the placement of an image inside the body (a TextExpander signature will always be at the top). 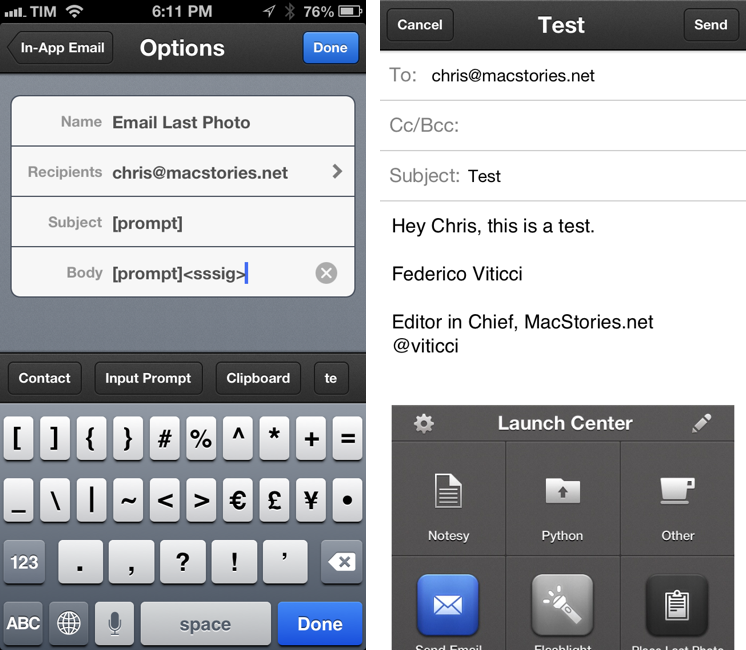 …or requesting text in a prompt and then URL-encoding it:

…or placing the last photo in the clipboard and then calling a Pythonista script that uploads it:

… or sharing text in Evernote using a TextExpander timestamp as title: 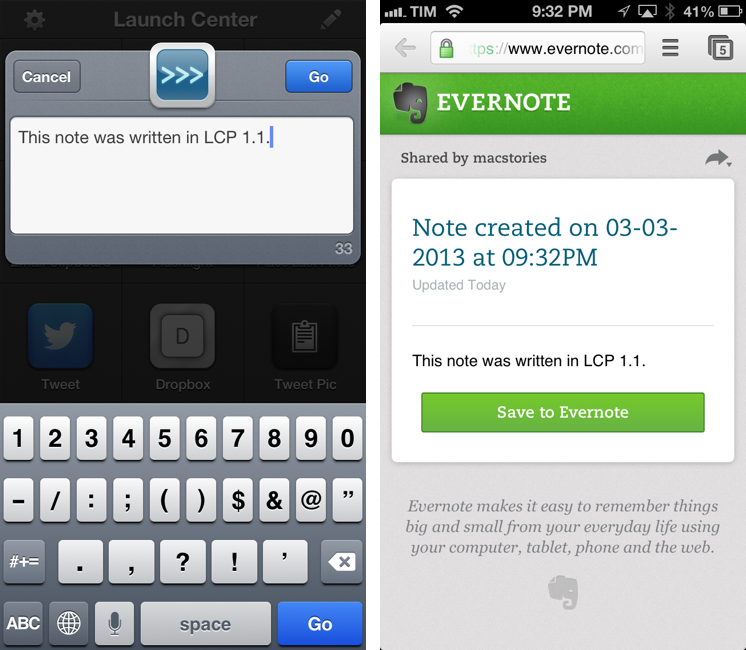 …or, better yet, sending messages directly within Launch Center Pro with In-App Messaging.

Similar to in-app emails, you can automate sending messages inside Launch Center Pro by pre-defining recipients and the contents of the body. Unfortunately, you can’t attach photos to these actions and the app doesn’t support manually pasting a photo item into the messaging panel.[6]

I have, however, created two shortcuts that are saving me a lot of time in sending – not reading – messages to my teammates from Launch Center Pro. The first action takes addresses of the MacStories team and brings up a new iMessage panel where I can type.[7] The second action does the same thing, but it puts contents of the clipboard by default in the compose field; this is perfect when I copy a link from Tweetbot and I want to quickly send it over iMessage.

And, of course, I have automated the process from the browser by creating a bookmarklet that sends the currently open webpage to Launch Center Pro’s messaging action. Scriptable iMessage![8]

It’s good to see App Cubby extending Launch Center Pro’s actions beyond text: I think it’s safe to say that, with the current feature sets, Launch Center Pro and Drafts are apps that complement each other. Using both Drafts and Launch Center Pro while taking advantage of each app’s unique strengths can lead to the creation of pretty powerful iOS workflows. There is some overlap, but both apps remain ultimately different.

I am a big fan of the changes introduced in Launch Center Pro 1.1, especially for photos, clipboard actions, and in-app messaging. Combining URL schemes with clipboard processing and TextExpander snippets is something I’ve long wished for, and I’m looking forward to trying the ideas Launch Center Pro users will come up with.

Launch Center Pro 1.1 is available on the App Store.