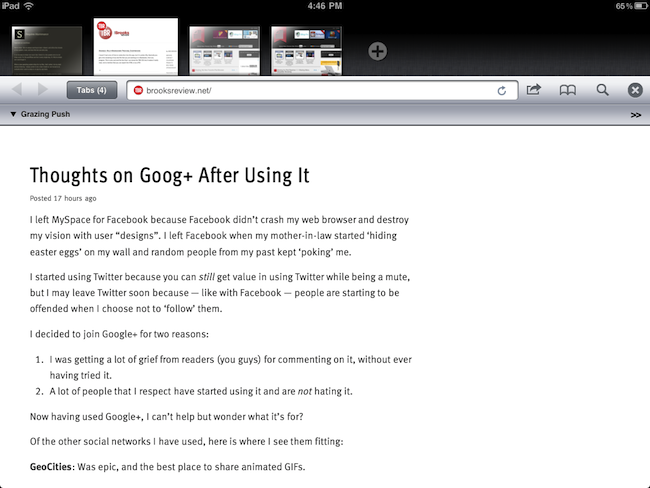 Back in September I first reviewed Grazing, an alternative web browser for the iPad that came out a few weeks after I complained about the average alternative browser for the iPad lacking the ideas, feature set or implementation to properly compete with Safari. Lots of things have changed since then, both with iOS Safari and the third-party development scene. Safari for iPhone and iPad got faster with the Nitro engine, received AirPlay support for any video found on the web and, with iOS 5, is also getting a major facelift with tabs on the iPad and other welcome additions such as tab undo and history right from the toolbar. On the other hand, the past few months have seen an explosion of alternative browsers that, in spite of the lack of Nitro JavaScript engine, are playing around with the craziest ideas when it comes to re-inventing web browsing on the tablet. I was impressed by the feature set of iCab Mobile (perhaps the most popular 3rd party browser for iOS), the UI of Sleipnir and the underlying concept of Portal, without a doubt the most innovative iPhone browser to date. There are dozens (if not hundreds) of alternative browsers for iOS now, and unlike last year many of them are really, really good. Apple still doesn’t allow iOS users to set a different default browser other than Safari, but third-party support has increased in the past months, so we’re starting to see integration with alternative browsers (usually iCab) in apps like Handoff and Mr. Reader.

Developers realized there could be so much more besides copying Safari and putting a sharing menu and tabs in an “alternative” browser. We have seen experiments with visual tabs, gestures, tab re-organization, and more. Is there still room for innovation? With iOS 5 bringing a slew of enhancements to Safari (including direct Twitter integration) and titles like iCab, Portal, Sleipnir, Skyfire and iChromy already available on the App Store, what’s next for third-party iOS browsers?

Grazing 2.0, a major update to the app I reviewed in September, provides an answer to this question by offering an interesting mix of features aimed at turning the app into a multitouch-enabled, platform-connected browsing experience for iOS. 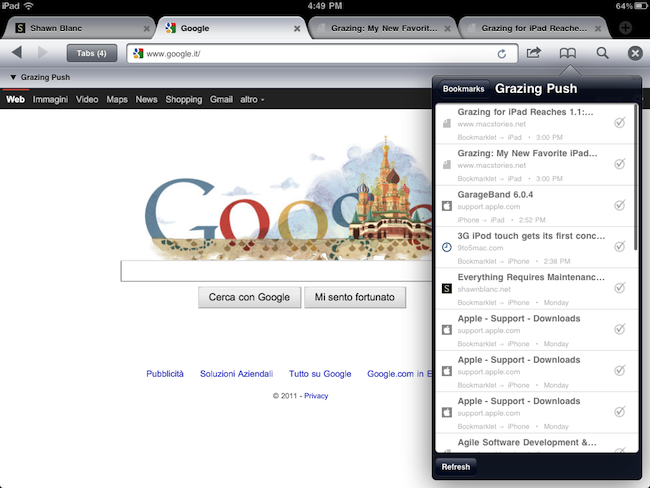 Grazing 2.0 works on the iPhone and iPad, and it’s capable of sharing webpages between devices. Soon, it’ll also come with an OS X Lion system utility to quickly send links from iOS to the desktop, and have them open in seconds in your default Mac browser thanks to push notifications for Lion. One of the biggest additions to Grazing, in fact, is the new Grazing Push service that allows you to share links instantly between iOS devices and a desktop browser. Similarly to how Push Browser can send links back and forth between devices and sharing the basic concept with Apple’s iOS 5 Reading List, Grazing Push can beam webpages to an iPhone or iPad from any device that’s already running Grazing with your Push account, but it also keeps a log of those links you’ve shared under a Reading List-like menu. This menu has been implemented in the iOS app within the standard bookmark window (it’s the “Grazing Push” menu), but it’s also accessible from a desktop browser through a special webpage. The iOS app can push links thanks to a new sharing menu, whilst desktop users can beam webpages to an iPhone or iPad by configuring a bookmarklet in their Grazing Push accounts. It’s simple, fast, and it works really well. 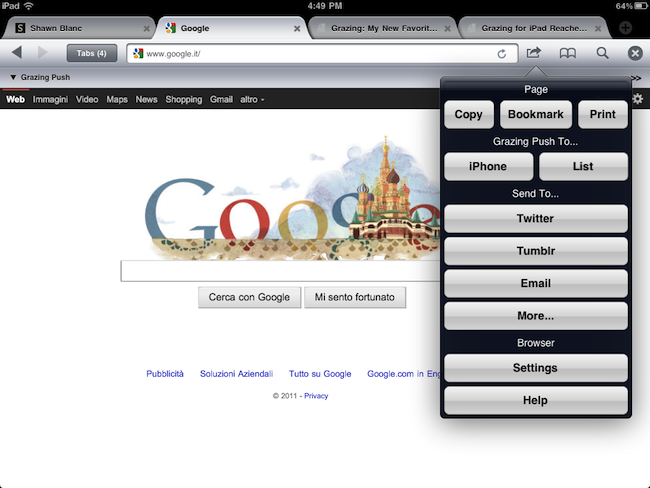 If you’ve been following MacStories in the past months you know that I’ve been busy looking for solutions to effortlessly push links between my two Macs and iOS devices; whilst Send2Mac remains the easiest way to natively integrate with OS X and receive links sent from iOS Safari (or any other browser), Grazing 2.0 packs everything into a unified system that will soon have full Lion support on the desktop side. In my tests, I’ve noticed how new tabs opened in seconds after I hit the “Push to iPad” button on Chrome for Mac, and similar speed was observed when directly exchanging links between iPhones and iPads. If Grazing on iOS is open, a new tab will pop up automatically; if Grazing is in the background, the URL will appear as a notification on screen, and tapping on it will take you to the webpage inside Grazing. This works especially well on iOS 5 with Notification Center, though you shouldn’t expect iOS 5 compatibility in the current release of Grazing 2.0 (I’m testing version 2.0.1, which fixes iOS 5-related bugs and will be submitted in the coming days).

Push technology aside, there are several new features in Grazing 2.0 worth mentioning, many of them being the reason why I’ve put the app on my iOS home screen again. More specifically, Grazing 2.0 tries to fix most of the annoyances of mobile browsing (tabs, shortcuts, menus, search) with unique ideas such as the Slidepad, or a redesigned tab experience. First off, as in the previous version tabs can be accessed in portrait mode from a popover menu or visual grid, and from a sidebar while reading in landscape orientation; in Grazing 2.0, the developers have implemented a new Tab Strip menu that, by pulling down the browser toolbar, lets you see tabs as desktop-like panels, or thumbnails, like Opera Mini. What’s great about this is that you’re not forced to see the Tab Strip all the time, and thumbnails provide a useful visual preview of the pages you have open. This works on the iPhone as well by pulling up the bottom toolbar, but I’ve found thumbnails to make more sense on the iPad’s bigger screen. Moreover, if you keep pulling the toolbar, you’ll jump past the Tab Strip to activate a “pull to refresh” command that sends Grazing into full-screen mode – that’s right, real full-screen with no visible buttons or menus. To interact with the browser whilst in full-screen mode, you’ll have to rely on the new Slidepad (which goes alongside version 1.0’s Thumbpad) that I’ll cover in a minute. A few more words about tabs first. In my tests, I’ve opened dozens of tabs and the browser never crashed because of the clever tab and memory management that automatically kills pages in the background when memory is needed to perform operations and keep the app stable. This was a big advantage of Grazing 1.0 over its competitors and the feature persists in version 2.0, being even more effective on the iPad 2 with more RAM and the A5 chip. Grazing is always snappy, fast, and stable. 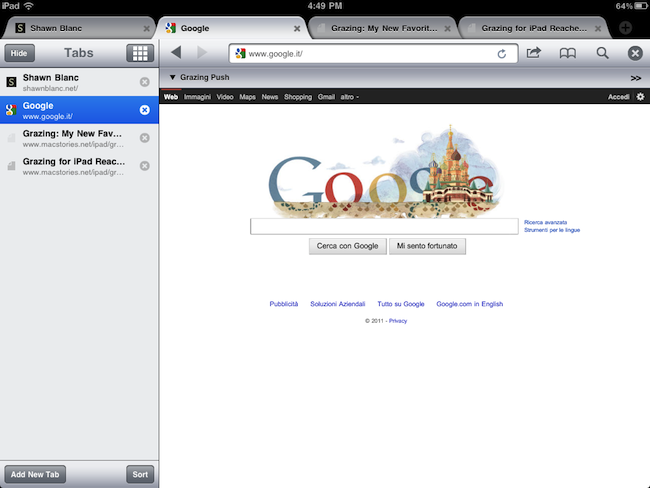 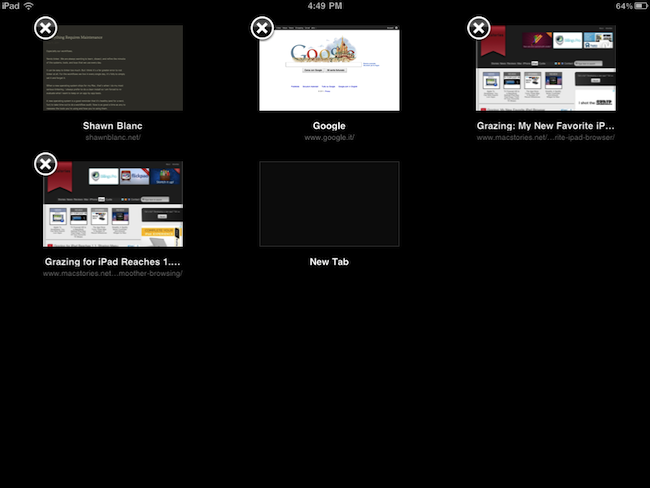 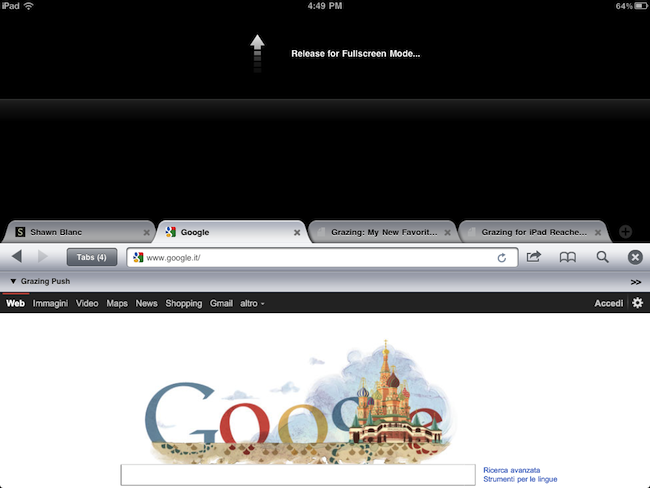 Furthermore, full gesture and multitouch support makes switching pages in Grazing 2.0 a real pleasure: you can swipe horizontally to move between tabs (like in Cab), or draw an “L” gesture on screen to move back and forward; different tap actions let you move between the previous and next tab, whilst swipes from the bottom left or bottom right (on the iPad) will open the address bar or search field, respectively, without interacting with the browser’s chrome at all. Version 2.0 of Grazing retains the Thumbpad functionality to quickly scroll webpages and open tabs in the background, but it also introduces new smart contextual menus to copy links and open new tabs, or perform a Google search for a selected keyword. This takes a while getting used to (you’ll have to learn some new gestures after all), but once mastered, Grazing’s support for multitouch and thumb interactions really takes browsing to the next level.

Which brings me to the Slidepad, a new feature that helps you getting things done faster by placing common actions and shortcuts into a semi-circular, translucent menu that can be opened at any time by swiping your finger from a side of the iPad’s screen, or the bottom toolbar on your iPhone. The Slidepad is particularly useful when holding the iPad in portrait mode and using your thumb to scroll– it contains thumbnails to switch to the previous and next tab, enter and exit fullscreen, close the current tab or start a new search. You can also use the Slidepad to jump to the address bar and reload a page, or open the sharing menu to access Grazing Push or any other service supported by ShareKit. The Slidepad can be configured in the Settings to be enabled on a specific side of the screen, and overall it is a nice alternative to the usual toolbar + action menu combo that makes it easier to do stuff with the browser without ever lifting your fingers off the screen. 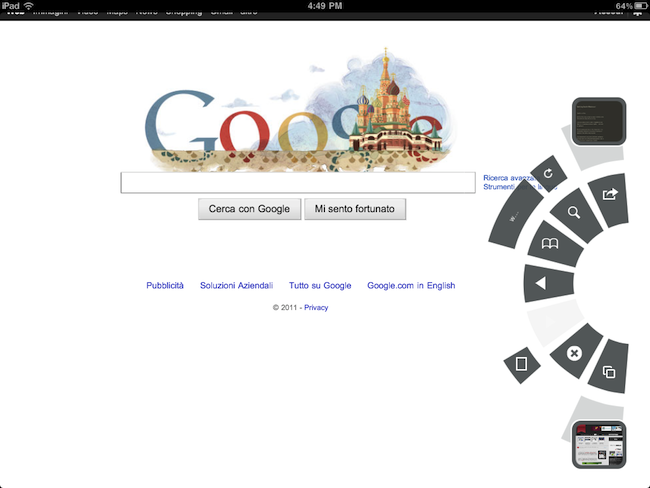 Grazing 2.0 is a full-featured browser with lots of additional features that I haven’t mentioned in this review (as most of them come straight from version 1.0, with a few improvements), which you can check out here and here. I have tried many alternative browsers in the past months, but after three weeks of testing and Home screen access, Grazing 2.0 has turned out to be a solid update with a fast engine, intuitive touch controls and nearly perfect tab management built specifically for iOS devices, with a slightly different implementation whether you’re using the iPhone or iPad version. The new Push service is a very welcome addition that I can’t wait to try out on Lion. You won’t be able to set Grazing as your default browser and perhaps you’ll keep coming back to Safari if you just need to quickly look up a webpage, but I found myself using this app when I needed to browse the web or lean back to read an article I discovered on my Mac. Of all the iOS browsers I’ve used until today, Grazing 2.0 is by far my favorite one, and you can get it now at $0.99 on the App Store.