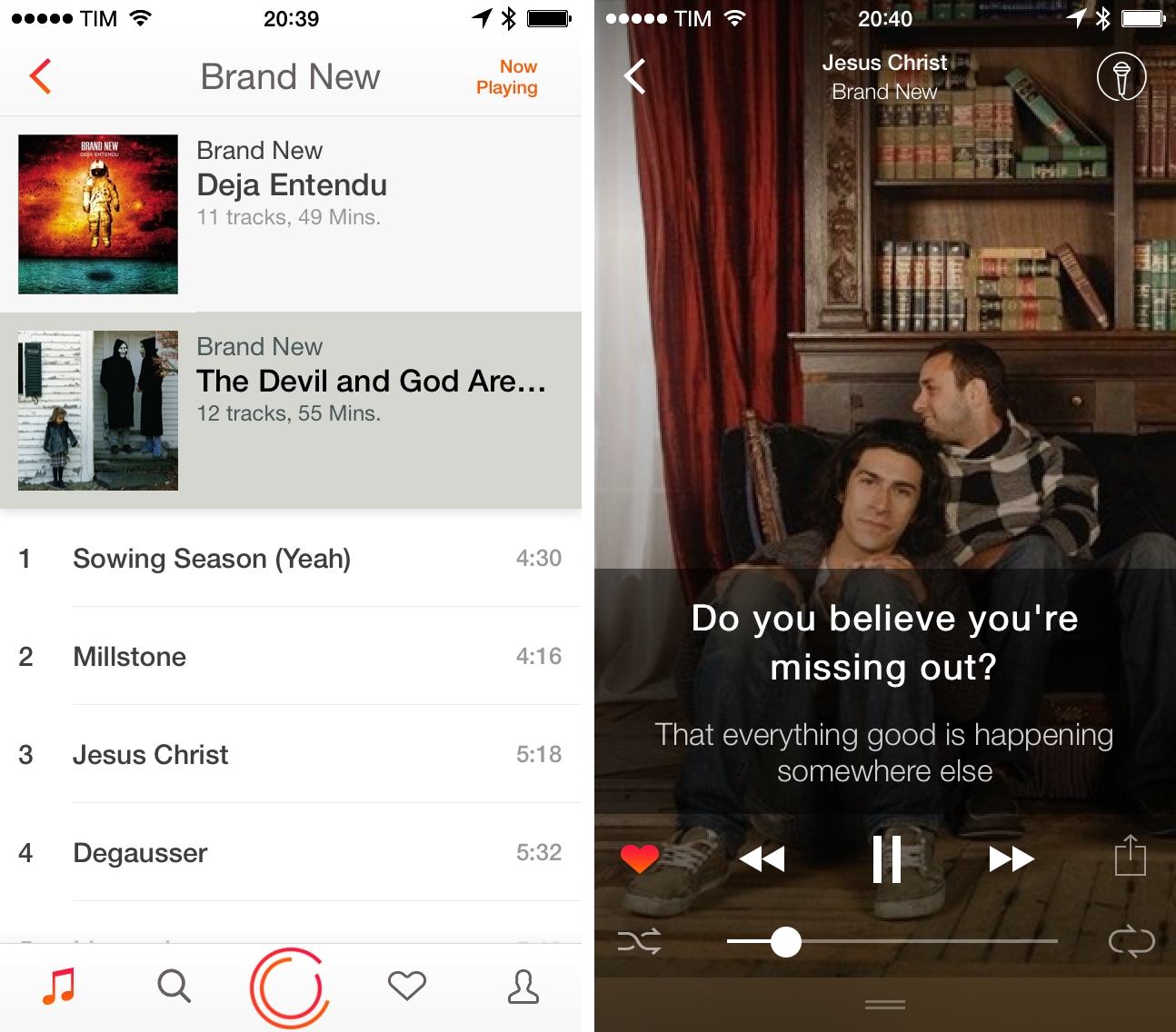 When I collected my must-have apps at the end of last year, I included musiXmatch in the iPhone and iPad roundups, but never got around publishing a proper review of the app. I’ve been using musiXmatch on a daily basis for the past six months, and I think it offers a solid song lyric-matching experience for iOS.

musiXmatch is a music player and lyrics discovery tool. Combining elements of Apple’s Music app with the idea of “tagging” songs borrowed from the likes of Shazam and SoundHound, musiXmatch can find lyrics for the song that’s playing in the app, or it can listen to audio through a device’s microphone, identify a song, and bring up lyrics that are synced with the song’s progress and that advance in real-time as you listen. Because musiXmatch has cut deals with copyright holders in the music industry, the app has a large catalogue of lyrics and, in my tests with hundreds of songs, it only failed to find lyrics a couple of times.

The app’s core feature is the MusicID screen, which is similar to Shazam and other similar apps: hold your iPhone or iPad up to a speaker, and the microphone will listen to identify a song. musiXmatch’s MusicID is powered by Gracenote, and it usually takes a 3-4 seconds to recognize a song, with another extra seconds required to switch to the Lyrics screen, which features an artist’s photo in the background with scrolling lyrics laid on top. The tiny delay is due to the fact that lyrics aren’t downloaded and stored in the app locally – they are fetched from musiXmatch’s online database1. Thankfully, unlike other iOS 7 apps that display text on top of fancy photography, musiXmatch keeps everything quite readable by highlighting lyrics with a darker background and through settings to specify font, font size, and font weight. 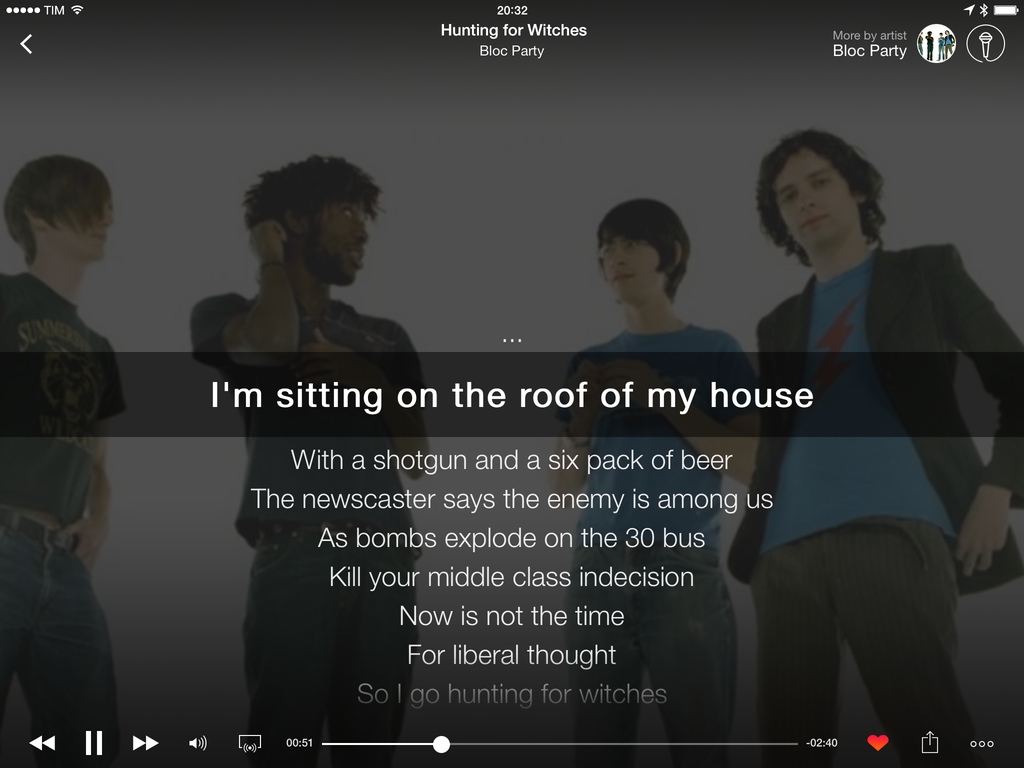 On the iPad, lyrics can be viewed in an extended mode that shows all lyrics from the current song, and not just the on-time ones. While I find this option convenient (especially when you want to know the full lyrics of a song you’re already familiar with), I do wish there was a way to hide the background photo to increase readability. Aside from lyrics, musiXmatch’s Now Playing screen comes with the usual set of sharing features (including Instagram, which generates a photo of the current lyrics – a nice touch) and buttons to save a song to your favorites and learn more about an artist.

As far as music discovery goes, musiXmatch comes with full artist pages with shortcuts to albums, top tracks, and related artists. The app loads song previews from iTunes, but it can also match songs with their counterparts on YouTube and play videos with lyrics in the Now Playing screen. This feature is only available on the iPad, and it also allows you to set default playback quality for videos in the Settings. There’s a search option to look for artists and songs in your local music library or on iTunes, which, according to musiXmatch, should also be capable of finding songs that match lyrics you type in the search field; in my tests, I was never able to get the lyrics search feature to work, which forced me to use Google to look for bits of lyrics I remembered. There are also Top Chart and Popular views to see trending songs on musiXmatch, but I mostly ignored this aspect as I prefer the curation services offered by Beats Music to learn about songs I may like (I can understand its convenience though). 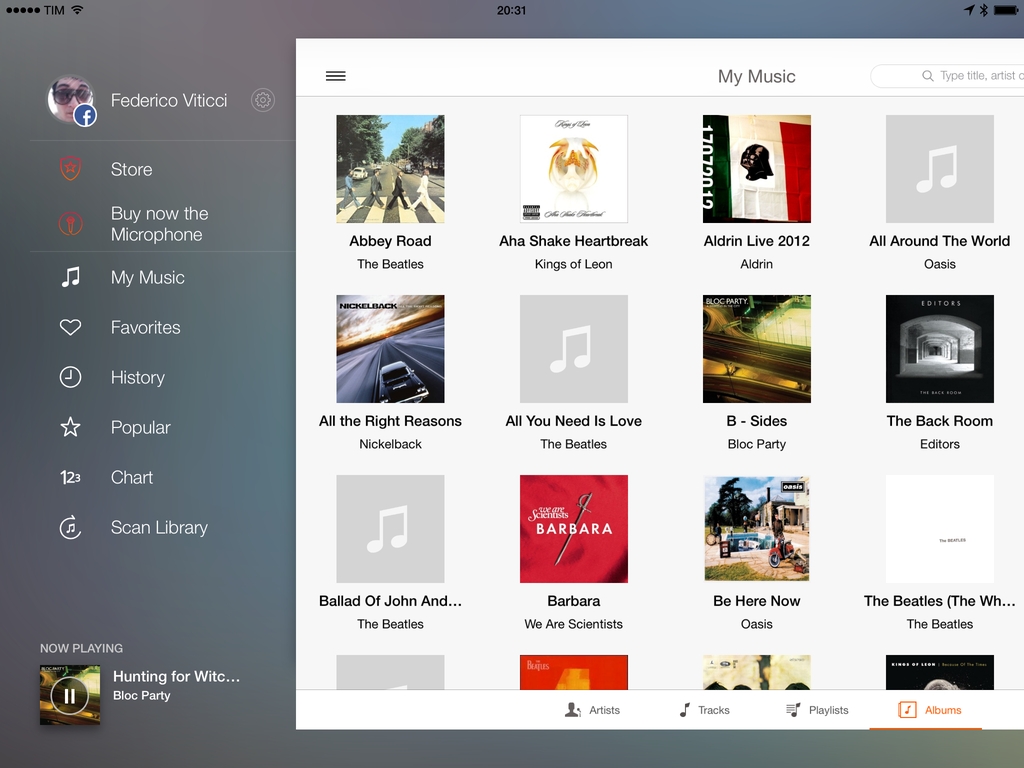 As a local music player, musiXmatch is fairly well done. The app can scan your iOS music library to look for songs, and it can load media stored in iTunes Match. To navigate your library, musiXmatch displays tabs for artists, tracks, playlists, and albums, with the iPad app using a nice grid-based layout instead of the iPhone app’s standard list view. 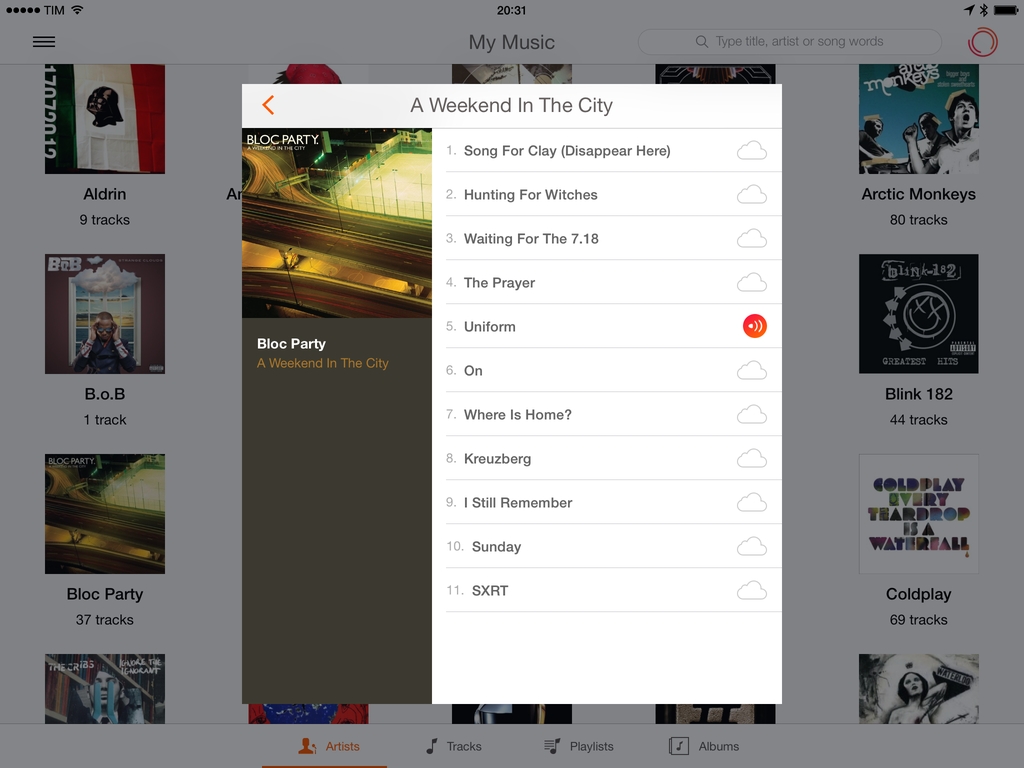 Unlike Apple’s Music app, the contents of albums aren’t displayed inline – after tapping an artist’s name, you’re first presented with a list of albums, and then you have to choose an album to see songs – a design that I find superior as it doesn’t make an artist’s view absurdly long to scroll (as it’s the case in the Music app for iPhone). When you tap a song you want to play, musiXmatch will open the lyrics screen, which takes those aforementioned few seconds to load; for this reason, I recommend using musiXmatch only if you’re really interested in learning lyrics, otherwise solutions like Ecoute provide a faster, richer experience.

A complaint I have about musiXmatch is the business model – or rather, its implementation. musiXmatch is free with In-App Purchases to remove ads and unlock Apple TV Mirroring, and they are structured to make the annual subscription appear as the best deal at $4.99/year, which is fine because I believe the service is absolutely worth that price. However, musiXmatch requires using a Facebook or Google+ account to “sync” the In-App Purchase across devices, something that I find curious as restoring In-App Purchase shouldn’t require any other Internet account on iOS. There is no way to create a musiXmatch account to “sync” these premium features, so you’ll be forced to log into Facebook or Google to unlock an In-App Purchase you’ve already unlocked through iTunes. These social requirements are redundant, unnecessary, and ultimately detrimental to an otherwise polished experience that shouldn’t force App Store customers to rely on social accounts to properly use In-App Purchases.

In the past months, the musiXmatch service has shown technical issues on a couple of occasions, including today. In my experience, the downtimes have always been relatively short (3-4 hours) with constant updates from the musiXmatch team on Twitter.

Overall, musiXmatch is impressive and accurate. I’ve discovered lyrics for hundreds of songs and finally learned some of my favorite ones thanks to musiXmatch. The app can listen to songs playing on the same device, and its integration with iOS’ local music library means it can display lyrics for songs you already have without having to use the microphone at all. I mostly find myself trying to find lyrics for songs that are playing on my computer or iPad, and the app’s on-time, licensed lyrics provide a great experience for those interested in knowing the lyrics of songs they like. The app has a few issues with search and the way In-App Purchases are managed, which are aspects I’d like to see improved in the next version.

musiXmatch is free on the App Store.