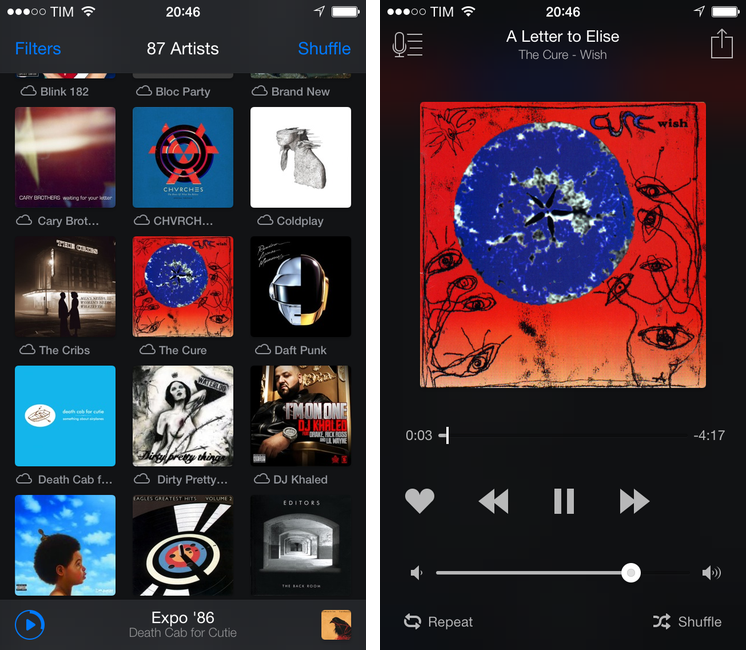 Last year, when we reviewed Ecoute, we called it the best music player for iOS. Apple’s Music app has never been packed with features when compared to iTunes on the Mac, but it’s the app that the majority of people use because it’s free and built into the operating system.

With iOS 7, Apple redesigned the Music app with some questionable choices for artist and album navigation and more advantages over third-party clients through the inclusion of iTunes Radio streaming and a special widget in Control Center to like songs and add them to your wish list. The Music app is, effectively, irreplaceable if you care about iTunes Radio and managing your music and playlists, but I think that the new Ecoute for iOS 7 does several things better than Apple’s app.

Ecoute 2 is a complete redesign for iOS 7 and, more surprisingly, a free update for existing customers. The app’s basic layout hasn’t changed: navigation is handled by a grid rather than a list, and you can alter the grid at any time to sort by album, artist, playlists, and even podcasts if you don’t want to use the Podcasts app. The song that’s currently playing is displayed in a bar at the bottom of the screen, which you can tap to enlarge the artwork and bring up the Now Playing screen or tap on the leftmost side to pause/play.

To switch between sections, you can tap the Filters button in the top navigation bar, which will collapse the main screen, tilt its perspective, and show tappable labels; it’s a fun transition, but I wish I could also swipe across the title bar to quickly move between filters without showing the full menu.

For me, the best feature of Ecoute is its superior navigation. Thanks to the grid layout, artists and album retain recognizability and more items can be displayed on the screen. Compare the screens below, for instance, to see Apple’s Music app (left) and Ecoute (right) side by side: 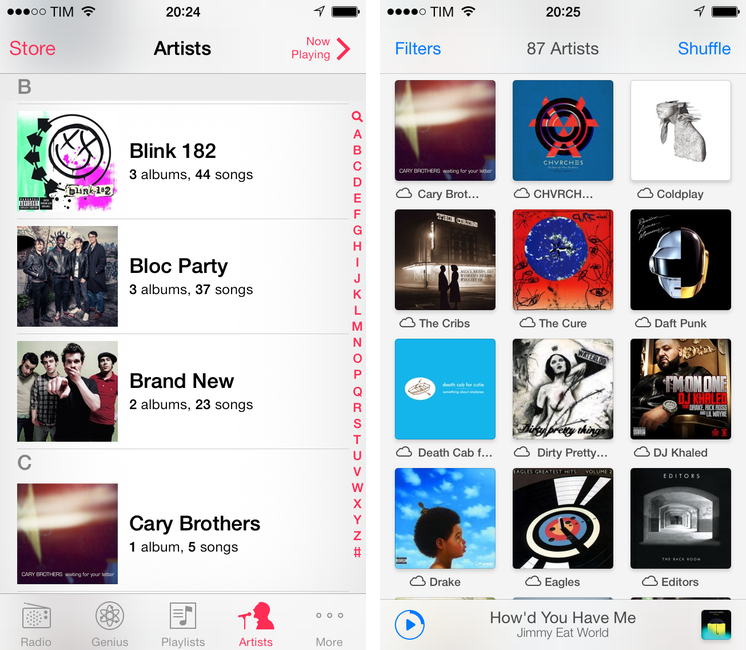 The difference is even more obvious when viewing albums, which Apple decided to show fully expanded under an artist’s view (likely to save taps to play songs), a decision that has the awful consequence of requiring users to scroll through long lists of songs to navigate to an album at the bottom of the list. Ecoute, on the other hand, uses a more traditional approach that lists albums without songs – you have to tap to view songs inside an album, but at least you don’t have to scroll for several seconds. By the way, Ecoute has an automatic night theme based on auto-brightness (like Tweetbot), but you can deactivate the automatic mode and always enable the dark mode – which I prefer to the plain white one. 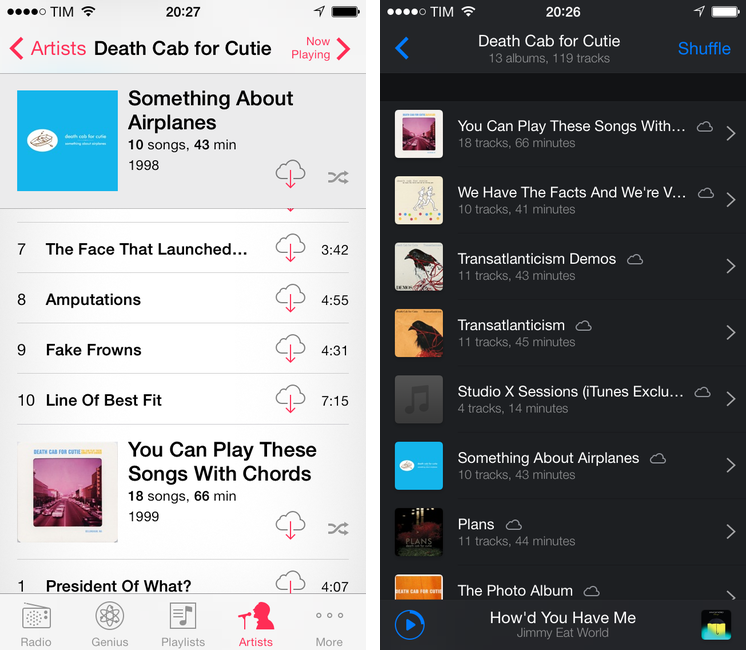 For version 2.0, PixiApps decided to build their own navigation system, eschewing Apple’s default framework that – something that’s often cited as a drawback of iOS 7 – is slow and blocks user interaction while transitions are being executed on screen. Here’s a practical example: in Ecoute, if you tap the wrong item, you can immediately swipe back as soon as the app starts pushing the previous view to the left. Trying to perform the same gesture in Music would result in a swipe that isn’t registered by the app because the (slow) transition is still running. Thanks to its custom framework, Ecoute feels faster and more responsive, and it has allowed its developers to write the app for both iOS 7 and iOS 6.

UI responsiveness can also be appreciated in the app’s Now Playing screen. When you tap the playing bar at the bottom, the album artwork is enlarged and quickly pushed into the main view with a lovely bounce effect that brings up playback controls and song information. To dismiss the screen, you can swipe down to “throw it back” into the bar (even when the animation is still completing). 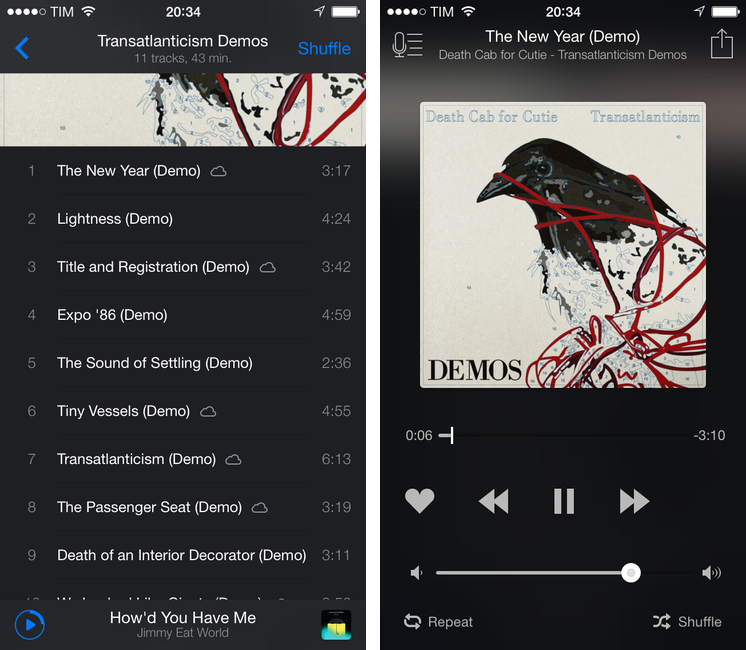 I find Ecoute’s shortcut for Now Playing much more intuitive than Apple’s solution (a button in the top right), but I wish the screen came with custom artwork blurring (as seen in the Remote app for iPhone) rather than a normal blurring of what’s below the current view.

While a song is playing, you can view lyrics within Ecoute – with a catch. By tapping the lyrics button in the upper left corner, the album artwork will be pushed to the bottom to leave room for an excerpt of lyrics fetched from LyricWiki. I assume that, for legal reasons, Ecoute can’t embed the full lyrics, so if you want to read a song’s lyrics you’ll have to tap a button that will open a modal web view that doesn’t have any sharing buttons and that needs to be dismissed entirely if you want to control Ecoute again. It’s nice to have access to lyrics inside Ecoute, but the integration is half-baked when compared to musiXmatch; if PixiApps has to stick with this implementation, they should at least make the web view dismissable without losing lyrics. 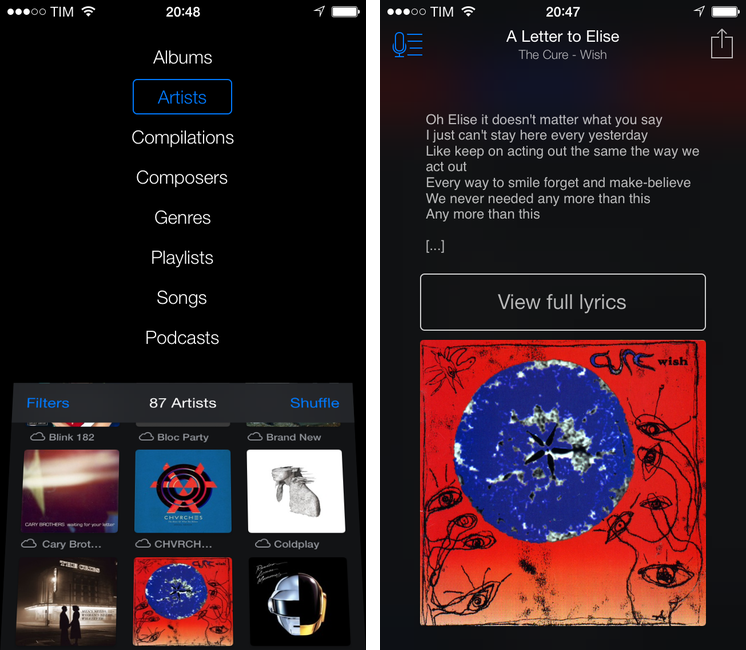 There are several minor features that I like. Search, for instance, follows the Spotlight model on iOS 7 in that you can swipe down from the middle of any screen (except Now Playing) to make the title bar flip over to reveal a search bar where you can type. If you want to quickly navigate your music library, you can tap & hold on the right edge of the screen and Ecoute will show a traditional alphabetical scrubber that, however, will also highlight items matching a specific letter with a blue selection. 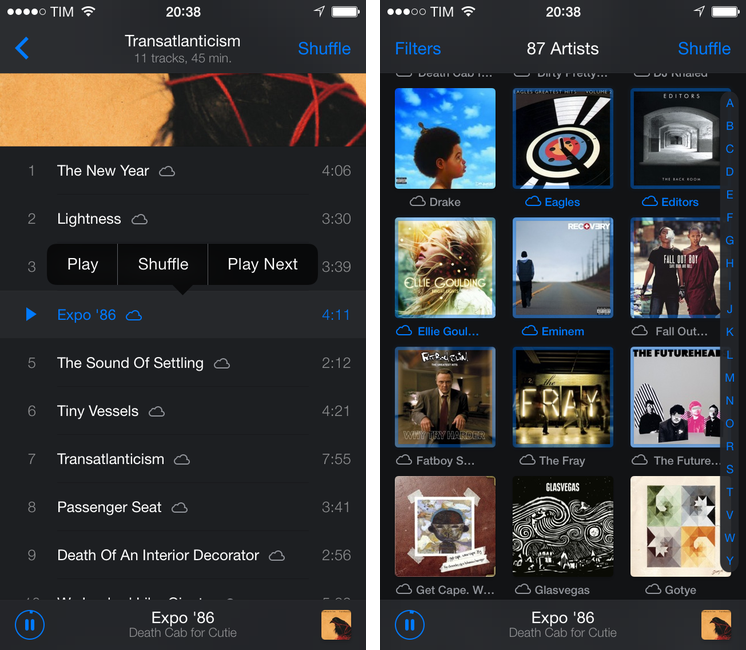 Gestures throughout the app deserve a mention as well. You can tap & hold on songs and albums in the main list view to play, shuffle, or play next; you can tap & hold the now playing bar or album artwork in the dedicated screen to jump to artist or jump to album; you can swipe horizontally in the Now Playing screen to move to the next song; you can tap & hold on an artist to view all songs grouped in alphabetical order. I feel like these gestures should be better documented in the app, as they’re handy and can save time navigating large music collections.

What keeps drawing me to Ecoute is the fact that, unlike other music clients for iOS, it can stream songs that haven’t been downloaded from iTunes Match yet. This comes with pros and cons that you have to keep in mind to adjust your expectations. Normally, third-party music clients can’t access iTunes Match libraries if they’re handling playback – see Party DJ as a recent example. There are several limitations in Apple’s media framework and the company still hasn’t fixed them in iOS 7. Ecoute uses the Music app for playback – a trick that allows it to show iTunes Match content that hasn’t been manually downloaded and to start streaming without opening Music. To confirm this, start a song in Ecoute, close Ecoute from the multitasking view, and you’ll see that it’ll keep playing – Music is handling playback.

The downside is that Ecoute won’t appear as the app in charge of music playback on the system. Control Center will show that a song is playing, but tapping its name won’t launch Ecoute – it’ll launch Music. To me, this is an acceptable trade-off, as I’d rather have a workaround to stream iTunes Match in Ecoute than be stuck in Music unless I agree to download albums locally.

Ecoute has a “Play next” feature, but, alas, there’s no Up Next-like queue management: adding a song to the queue will put it at the top of the queue, not at the bottom after songs you’ve already queued up. On iTunes for Mac, you can either play a song next or add it to Up Next, but Ecoute can only “play next”. Furthermore, the Play Next button is based on another workaround that’s a byproduct of playback managed by the Music app: Ecoute can’t create a real queue in Music, and therefore every time you’ll add a song to the queue you’ll hear a brief interruption as the currently playing song stops and resumes itself. This is a hack, and it works, but it’s not elegant and the app doesn’t have all the queue-related features of iTunes 11, which is unfortunate.

Ecoute can’t replace Apple’s Music app for me because it doesn’t have playlist management, iTunes Radio, and an iPad app. Apple’s app still has an edge over Ecoute and the gap is substantial if you listen to iTunes Radio.

I prefer Ecoute to the Music app for browsing and listening to my iTunes Match library. Ecoute has better information density, is faster, and it can stream songs and playlists without forcing me to download them. I think that its grid layout makes more sense than Apple’s wasteful usage of lists and the app’s gestures are responsive and useful. Integration with the Music app has come at a price: PixiApps had to accept a series of compromises to make iTunes Match work in Ecoute, and I’ve experienced a couple of bugs and crashes that I assume were related to issues with iTunes Match streaming.

I like Ecoute and I think it makes for a good companion to Apple’s Music app, especially if you don’t like the changes introduced in iOS 7. Ecoute 2 is a free update for existing customers and $2.99 on the App Store.