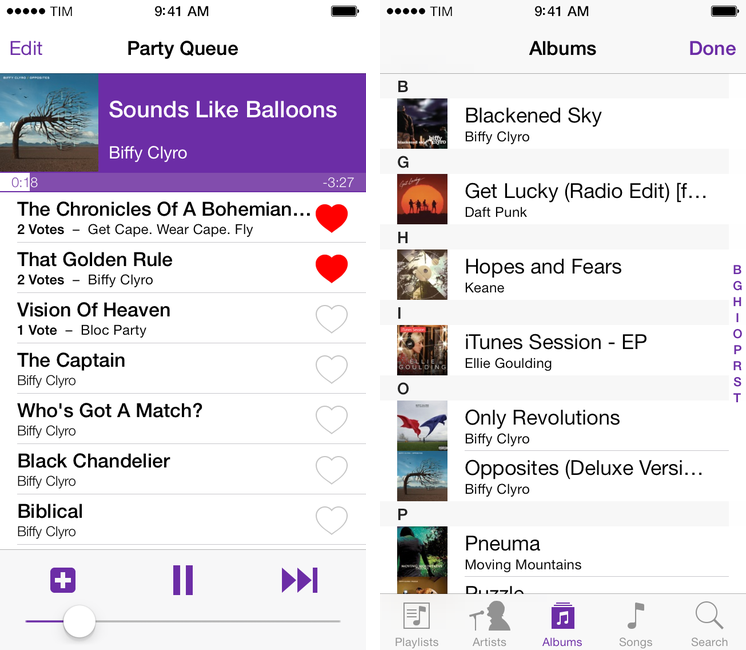 Developed by Alex Price, Party DJ is an iOS 7 app that brings back one of the old features of iTunes DJ and Apple’s Remote app: the possibility to collaborate with friends on what music to play through a voting system. The app, available today on the App Store, comes in two versions: a paid, $1.99 “host + remote” app to handle playback and queue management, and a free Remote companion to install on iPhones or iPads that can vote songs. Price is the developer behind CameraSync, a longtime favorite of mine, and I was immediately intrigued when he showed me Party DJ a few weeks back.

Before iTunes 11, users could set up iTunes DJ, a feature of iTunes for Mac, to receive votes from other iOS devices through the Remote app. Provided that everyone was on the same local WiFi network, guest users could tap on a heart icon to vote for a song, and songs with the most votes would be automatically advanced to the top of the DJ playlist, making them next in the playback queue. Users could also request songs, and the host could enable/disable voting from iTunes’ Preferences.

Fast-forward to 2012, Apple removed iTunes DJ from iTunes 11, killing off the DJ feature that wasn’t probably being used by millions of users. “To be perfectly honest me and my friends loved the old iTunes DJ feature”, Price told me, “so when Apple got rid of that in iTunes 11 I thought that even if no one else wanted that feature, I wanted it”.

Party DJ, no matter the version that you end up getting from the App Store, works through the native Music library of your iOS device, completely removing the need to use iTunes for Mac as a host device. “All my music was on iOS anyway, so I decided to do a better version of it for iOS and add as many features as I could that I knew Apple would never have done”, Price added. 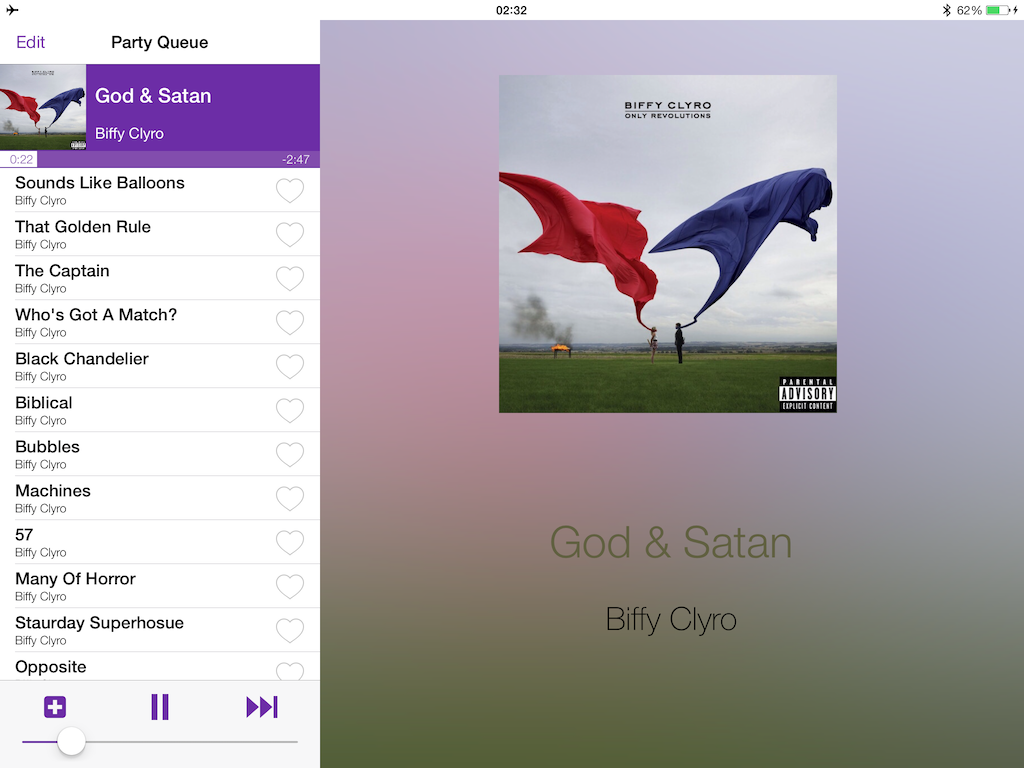 Once launched, Party DJ will scan your Music library on iOS for music and playlists; in the Settings, you can choose to shuffle All Music or just songs from specific playlists, set a display name, activate a passcode to control music, and disable guest uploads (which I’ll get to in a bit). When you’re ready to play, tap Start and Party DJ will switch to the Party Queue screen, which shows the currently playing song at the top (on the iPad, the right portion of the screen is dedicated to album artwork).

The basic functionality is unchanged from the old iTunes DJ feature: songs have hearts next to them, and your friends, accessing a Party DJ device with the Party DJ Remote app, can vote by tapping the heart icon. Songs are rearranged on the fly based on votes, but only you, the host, can skip songs or delete them from the queue – you’re always in control (unless you disable the passcode option). Playback controls are extremely simple – perhaps the app is even a little too simple on the iPad, where I feel the larger screen could have been used for something more audacious. However, considering the nature of the app, I don’t see this as a big deal – you’ll be using Party DJ with friends and family, and I highly recommend to have a good time instead of thinking about user interfaces.

What Price did differently than iTunes DJ is the ways that people have to connect to Party DJ. Aside from being on the same local WiFi network with the iOS app, iOS users who are not connected to a WiFi network (say, during a trip in the car or at the family gathering at the cabin in the woods) can use Peer-to-Peer Bluetooth on iOS 7 to connect to Party DJ. The setup is seamless and there’s nothing to configure – if WiFi is off and all devices are running iOS 7, the Party DJ apps will just see each other with no pairing necessary. In my tests, it worked admirably. 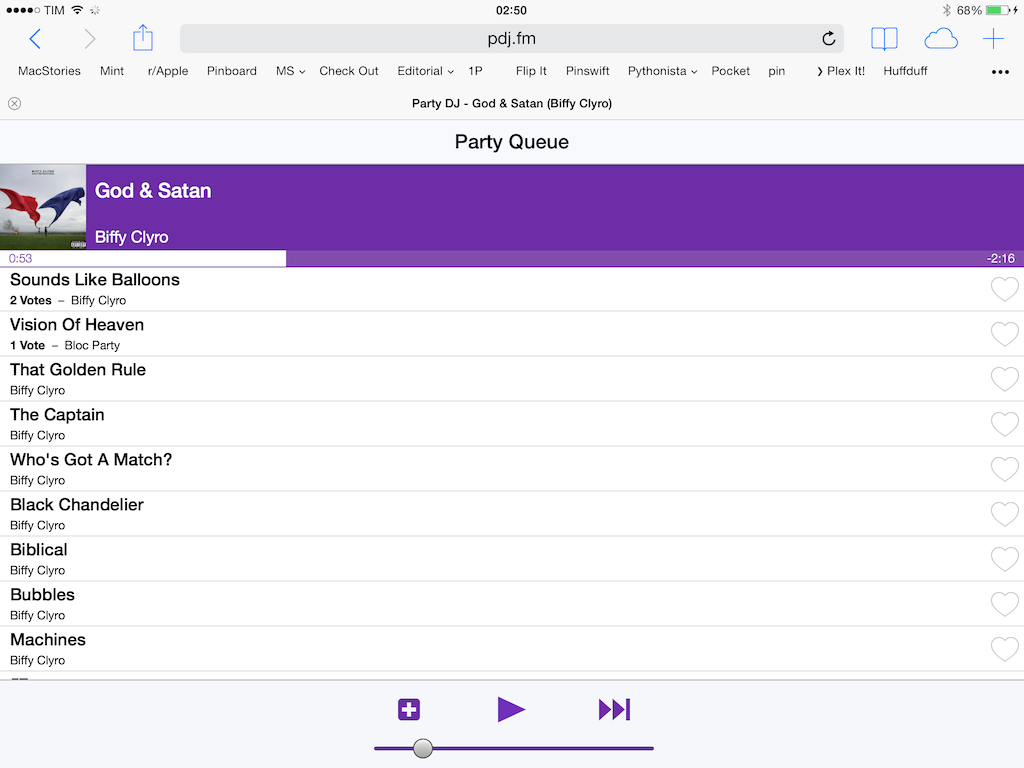 But there’s more. If you’re on the same WiFi network but without friends running iOS, Party DJ can start a local web server behind the scenes and let your friends rocking those Galaxies and Lumias connect directly to your device from a web browser. The app will generate a short URL such as pdj.fm/ticci which doesn’t actually broadcasts your music queue on the Internet – it uses it to redirect users to your local, private “server” inside the Party DJ app. Basically, you don’t have to configure any parameter yourself – just ask your friend to go to that special web address and they’ll get a web version of the queue. You can double check that Party DJ is entirely private by trying to access the URL over 3G – it won’t work.

When using Party DJ with three other devices over WiFi and Bluetooth and through Safari, response times were always excellent. Votes given by other users appeared within a second on my host device and playback could be controlled from other phones or tablets just fine. Alas, the app cannot access songs from iTunes Match that haven’t been previously downloaded, as that’s a limitation of iOS. 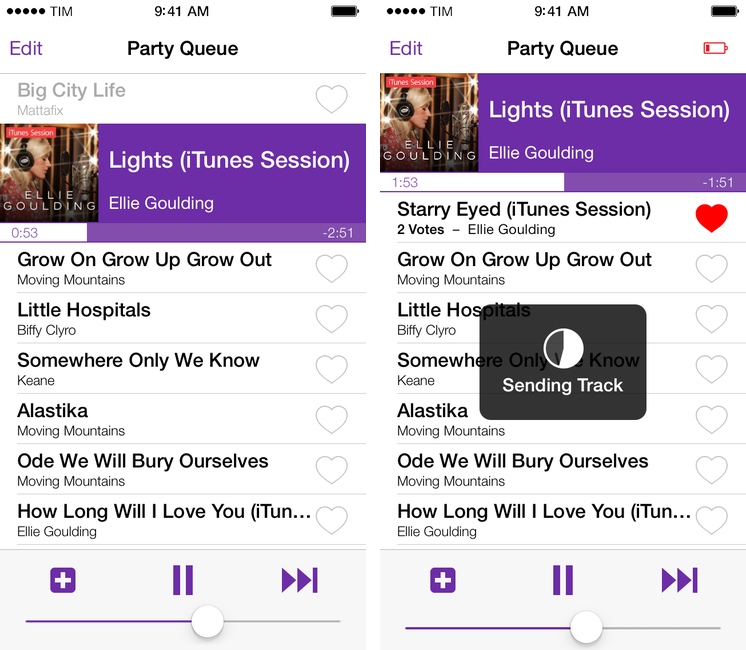 Party DJ’s “one more thing” is perhaps the most technologically impressive: if your friends want to listen to a song that you don’t have, they can send it to you over WiFi or Bluetooth. While connected to a host device, tap the “+” button to open the Music Picker, choose My Music, and pick the song you want to listen; if the host doesn’t have it, the song will be sent – completely wirelessly – to the main Party DJ app and given a vote from you.

I asked Price how he built this feature, and he explained that, once a song’s data is read by the first device, it’s sent – alongside metadata – to the second one and cached until it has been played, then it’s removed. “This feature did stick in my mind as the thing that Apple would be most likely to reject Party DJ for”, Price told me, “but I made sure you don’t get access to that track in future, it’s just a one time thing - not a way for people to pirate music”. Sending 3-minute tracks takes a while over Bluetooth (less than a minute), and it’s faster over WiFi; this caching feature is, obviously, only available on the iOS app.

Party DJ’s concept isn’t entirely unique, but the app is impressive in how it “just works” and brings back an old feature while adding new options thanks to iOS 7 and Bluetooth. I had a lot of fun testing Party DJ at home (somehow, votes for Oasis are never enough) and I can see it being used at family gatherings or parties where music democracy can be the best solution to settle arguments over what’s playing.

You can get Party DJ at $1.99 on the App Store for a limited time, and the free Remote app is available here.