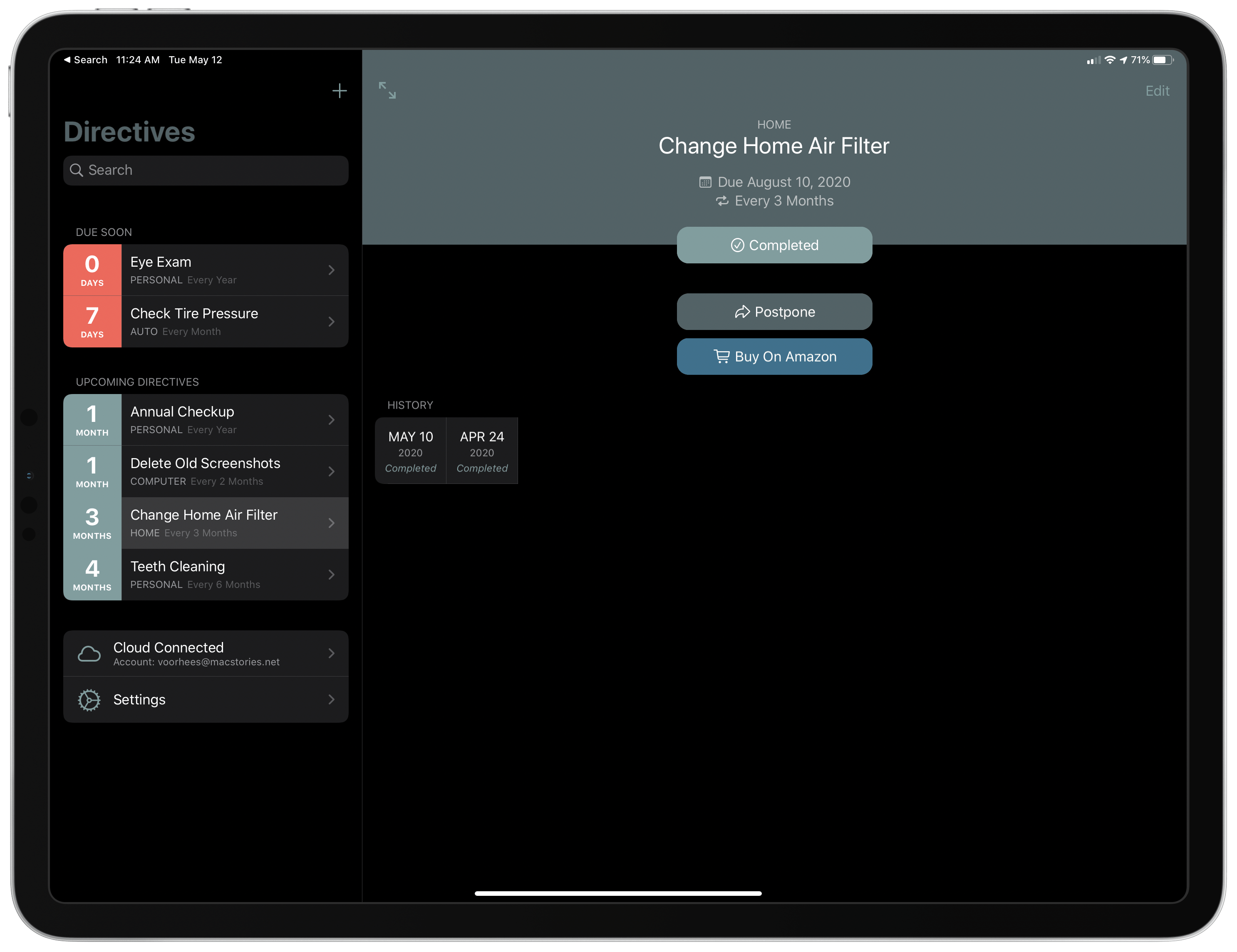 Directive is a task manager designed to remind you of recurring maintenance: things like home and auto maintenance, as well as personal care tasks. These are the kind of to-dos people often want to track the completion of and associate with some additional reference details. For example, you might want a record of the last time you changed your furnace’s air filter and keep a link for reordering more filters the next time you run out. 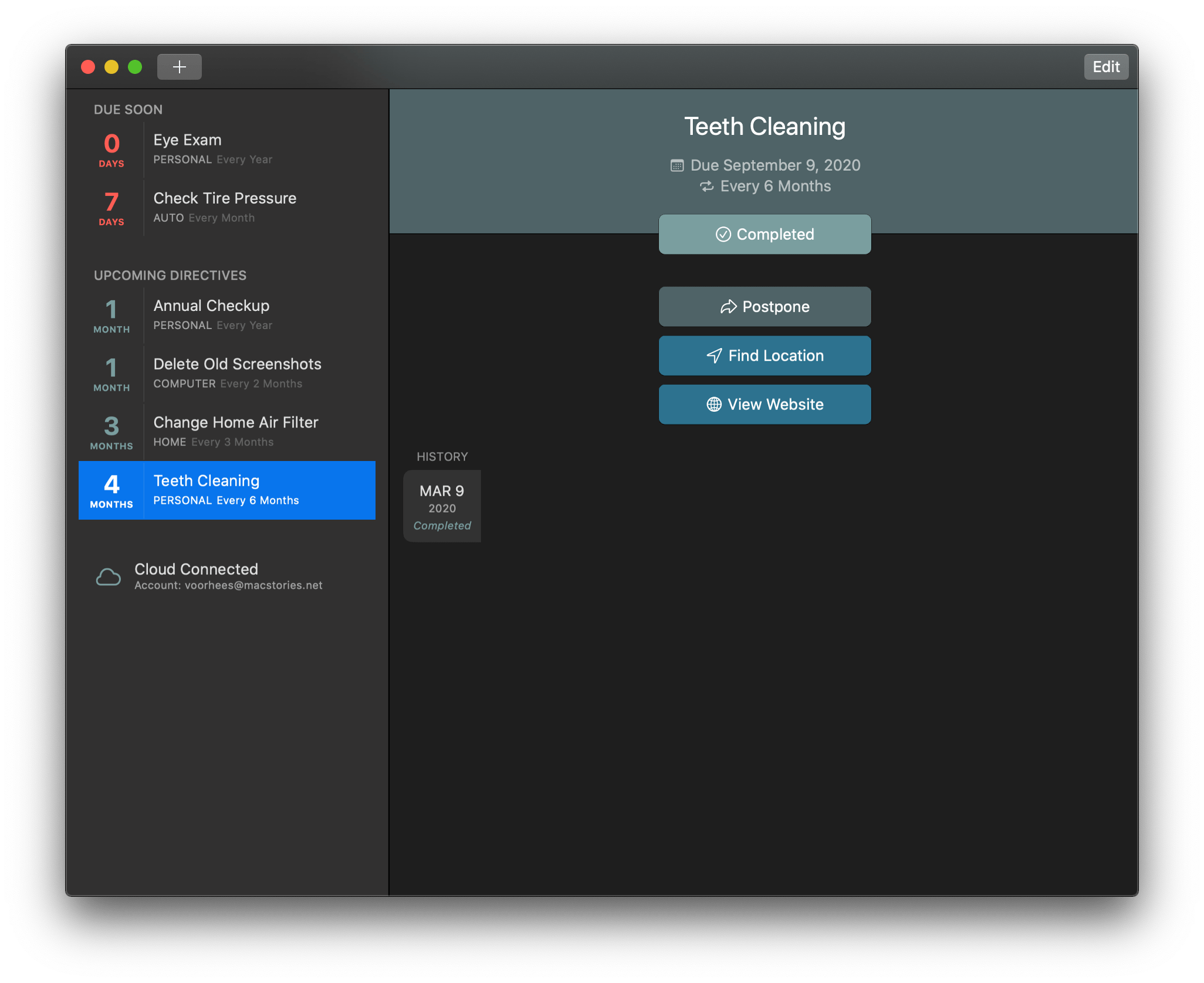 Directive on the Mac.

Of course, these sorts of to-dos can be managed and tracked using a traditional, general-purpose task manager, but just because that’s possible doesn’t mean there aren’t advantages to using an app like Directive. One of the issues I’ve eventually run into with all general-purpose task managers is that after a while, I reach a point where I’ve begun tracking so many different projects and aspects of my life that the task manager becomes a bloated mess that feels like I need a separate task just to remind me to manage my task manager. That’s when I know it’s time for a change.

That is exactly the situation I find myself in currently with Reminders. Apple did a terrific job with the latest iteration of the app, but I’ve stretched it to its limits. Part of that is due to new projects we’ve begun at MacStories, but it’s also because I’ve tossed more and more personal tasks and projects into the app over time.

As a result, I’ve begun to revisit my to-do setup. I haven’t had the time or energy to move the bulk of my tasks to a new task manager, though I expect I’ll be making a change there soon. Instead, I’ve focused on taking a couple of smaller steps to relieve the pressure on Reminders. The first was to recommit to using Due. I recently reviewed the latest update, and have been using it to move short-term tasks out of Reminders; the kind of things that come up that I need to remember to do later today, not next week. 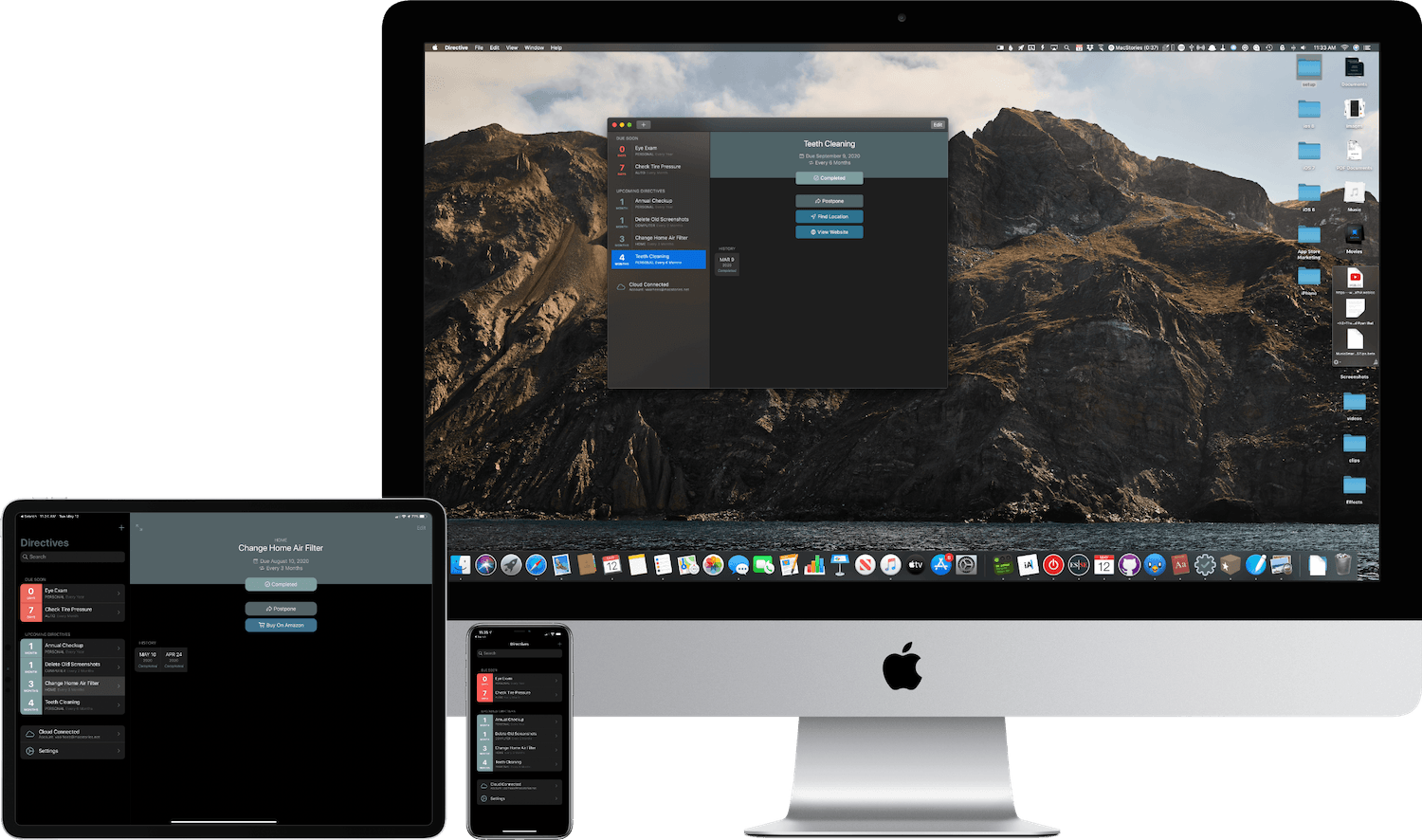 Directive scales nicely from one platform to another.

The second step I took was to try Directive, which I’m using to handle the opposite end of the spectrum from Due. Most of my recurring tasks happen every month or less, but there are some, like car and home maintenance tasks, that are measured in months, not weeks, which is where Directive excels. The app, which syncs across the iPhone, iPad, and Mac, comes with a long list of pre-built reminders you can add, along with suggested frequencies. It’s a nice touch that makes it easy to get started with a handful of tasks that are relevant to you. Of course, you can also set up your own tasks too.

Each task includes a title, a category like Home, Auto, Personal, or any you’ve created yourself, a last completed date, a frequency, a Details section, and an Actions section. Both details and actions can be labeled with one of nine predefined titles. The Details section is a notes field that can be used for small amounts of information you want to recall alongside the reminder, like the air pressure your car’s tires require. The Actions section is designed to store URLs and phone numbers. Once set up, an action can open an associated URL with the tap of a button. However, I wasn’t able to get the phone number functionality to make a call. 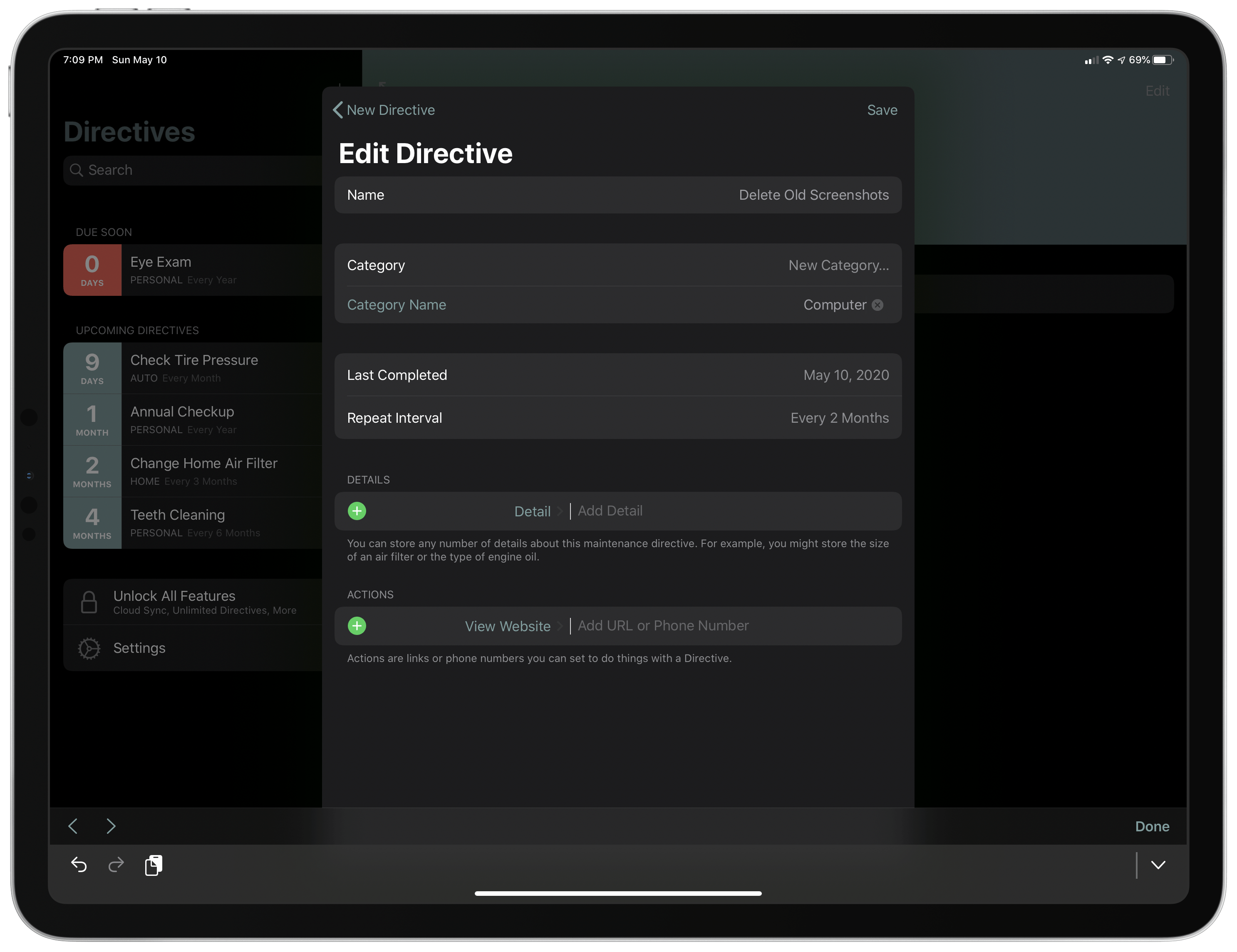 After you’ve set up a task, it appears in the app’s main UI, which is divided into items that are Due Soon and those that are Upcoming. If something is due or overdue, it’s highlighted in red, noting that there are zero days before it’s due, while upcoming tasks reflect the number of days, weeks, or months until they are due. Tapping or clicking on a to-do reveals its details, a button to mark it as completed, another to postpone the event, a button for any action associated with the task, and a history of completed instances, to which you can add a note. It’s all very straightforward and easy to use, scaling nicely to each supported device.

The early years of the App Store were notable for the large number of thoughtful, narrowly-focused utility apps that were available. The abundance of single-purpose apps was certainly driven by the store’s popularity, but it was also a consequence of the limits of the iPhone SDK. As the iPhone matured, the app landscape diversified to encompass those kinds of apps and a wide range of others.

We’re seeing something similar emerge again today. As we discussed this week on AppStories, a new generation of apps that are built from the ground up to work across all of Apple’s platforms is redefining the app ecosystem. It’s still early days for technologies like SwiftUI and Catalyst and business models like universal purchases. Still, apps like Directive are demonstrating that thoughtfully-designed apps that scale gracefully across Apple’s platforms are not only possible, they’re available now. Many of the first apps of this new generation are simple in the way the early iPhone apps were, but they are no less useful.

Directive succeeds by taking a considered, straightforward approach to a common problem and implementing a solution that works well across each of the devices it supports. I’ve tracked repeating maintenance tasks in Reminders and other task managers in the past. However, with all of the other recurring tasks I have, it’s been a pleasure to remove this category from Reminders and let Directive handle it. With notifications turned on, I’m not concerned that I’ll lose track of my tasks. On the contrary, they’re less likely to get lost and perhaps ignored when separated from my other obligations, at least that’s my hope. We’ll see.

Directive is free to download from the App Store. An optional $1.99/year subscription, which adds custom task intervals and unlimited tasks, is available too. The launch price of the subscription is a limited-time 50% off offer.