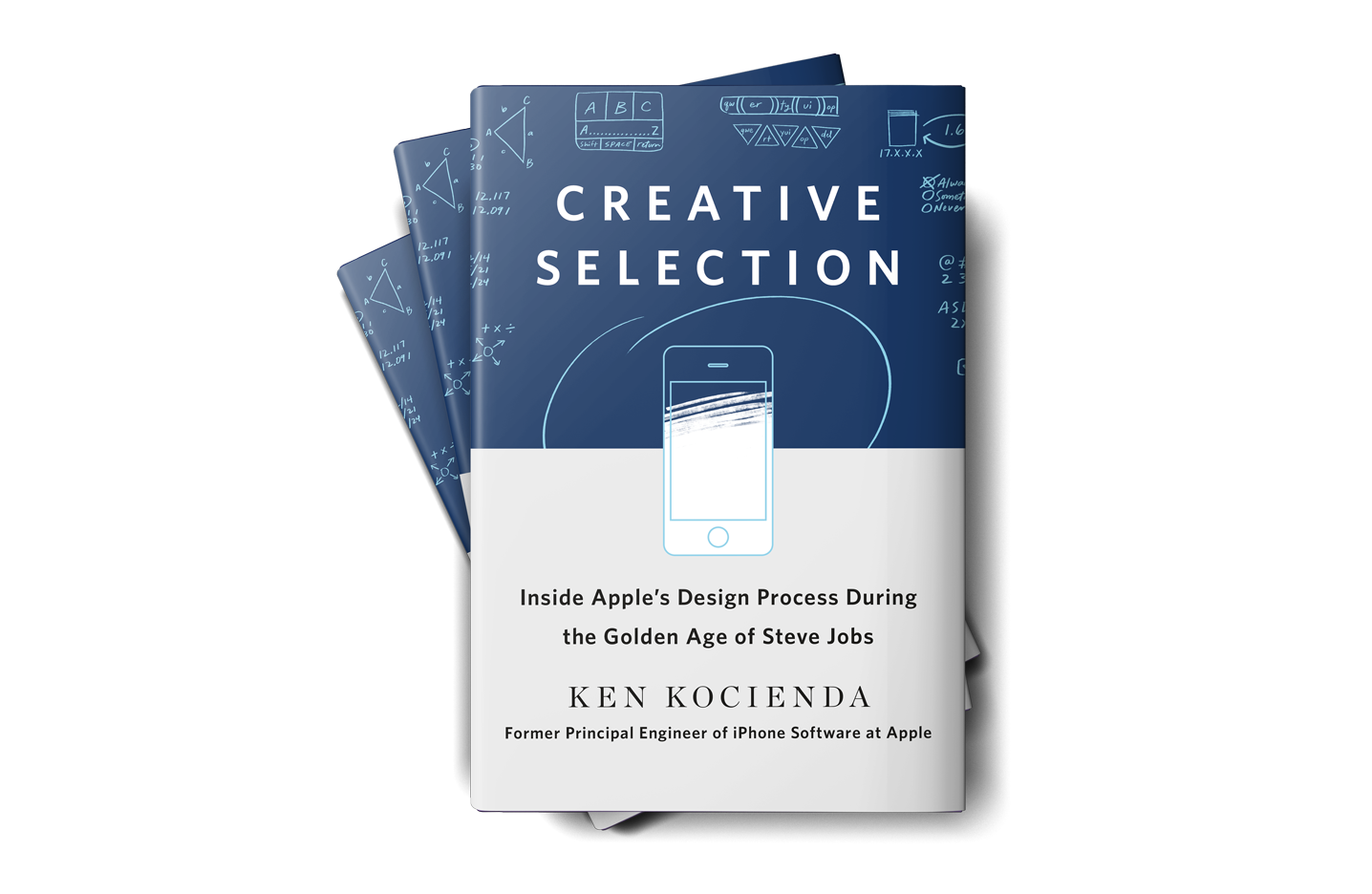 Today, former Apple engineer Ken Kocienda’s book Creative Selection, which covers his career at Apple and insights about the company’s software design process, was released. As an engineer at Apple, Kocienda worked on several high-profile projects including Safari on the Mac and the touch keyboards on the iPhone and iPad. Much of the publicity surrounding the book focuses on Kocienda’s work on the iPhone. However, there is a treasure trove of interesting anecdotes about other products and people that make Creative Selection an absorbing read for anyone interested in the creative process and Apple.

Kocienda worked at Apple from 2001 through 2017. However, Creative Selection focuses primarily on his work on Safari, the original iPhone, and to a lesser extent, the iPad. His later work on the Apple Watch, which is mentioned in his bio, isn’t included.

The book opens with a demo of prototype iPad keyboard layouts that Kocienda gave to Steve Jobs in 2009. It’s stories like these where Creative Selection is at its best. The demo was held in a conference room at Apple’s One Infinite Loop campus called Diplomacy, which Kocienda describes as ‘shabby, certainly not the decor you would expect in a company as obsessively design-focused as Apple.’ It’s a small detail, but an example of the excellent job Kocienda does capturing what it felt like to demo software to Jobs.

The episode also sets the book on the path to explaining its title. Software demos play an essential role throughout Creative Selection providing structure to the design process. Demos are the way the engineers and designers in the book share ideas with their peers and an opportunity to receive feedback allowing software to evolve iteratively.

Demos don’t tell the whole story though. Kocienda also identifies seven essential elements to software design success – Inspiration, Collaboration, Craft, Diligence, Decisiveness, Taste, and Empathy – which are the lens through which each of his stories is examined. Add to that small teams of highly committed people, and you have all the interlocking puzzle pieces that are woven throughout Kocienda’s narrative.

The first half of the book recounts the development of Safari. Kocienda explains how an early demo by Richard Williamson that shimmed the Konqueror browser onto Mac OS X inspired the team and kickstarted what became Safari. Along the way, Kocienda explains in plain English the challenge of porting 120,000 lines of Konqueror code to the Mac. For anyone familiar with software development, describing the magnitude of that sort of task is unnecessary, but the explanation and others like it go a long way towards making the book accessible to a broader audience.

The Safari project provides a foundation for Kocienda’s hypotheses about software design. A small team drawing on the expertise of each of its members slogged through over 100,000 lines of code with the focused purpose of building a faster browser. That focus, provided by a mandate from Steve Jobs, served as the team’s North Star keeping the project on track. The particulars of each story are different, but over the course of the book, the same pattern is repeated over and over.

Much of the rest of Creative Selection tells the story of the first iPhone with an emphasis on the development of its on-screen keyboard, for which Kocienda was responsible. Aspects of that story have been told elsewhere, like Becoming Steve Jobs by Brent Schlender and Rick Tetzeli and Walter Isaacson’s biography of Jobs, but nowhere is the tale told in such detail and clarity, explaining each challenge raised by building a software keyboard.

Through a process of iterative demos, Kocienda refined the iPhone keyboard from an early prototype that included multiple letters per key to what shipped in 2007. Along the way, the feedback loop provided by the demos and from colleagues who used the keyboard every day drove its evolution into a functional product.

Creative Selection is full of great stories, but my favorite part of the book is one of the final chapters entitled ‘The Intersection,’ in which Kocienda considers what Steve Jobs meant when he famously said Apple is at the intersection of technology and the liberal arts. As Kocienda explains:

Working at the intersection is not only about honing details so that an individual icon, animation, or sound achieves an aesthetic ideal in isolation. Liberal arts elements and state-of-the-art technology must combine, and the end result can be judged only holistically, by evaluating how the product fits the person.

Kocienda provides three examples of what he means, but my favorite is the story of how Imran Chaudhri demonstrated how direct manipulation of user interfaces with multitouch should work. Chaudhri would take a piece of paper, place it on a table and slide it around the table with his finger proclaiming that multitouch should work just as smoothly. Harkening back to earlier parts of the book, ‘The Intersection’ also revisits the ideas underlying Kocienda’s hypothesis about the elements of software design success synthesizing the stories told and the central message of the book nicely.

Looking at Creative Selection as a whole, the parts that work best are the stories about products and people. The lessons on Apple’s software design process were enjoyable to read too, but the flow of the stories early in the book was too often interrupted to explain how they fit into Kocienda’s conceptual framework of how software design works at Apple. I would have preferred a more pure memoir style in the early parts of the book that didn’t keep reminding me of the lessons I should be taking away from the stories. The lessons are so ably covered in the later chapters, that I was left wondering if more subtle foreshadowing of them in the early chapters would have been more effective.

I’m also not a fan of the illustrations of scenes from Creative Selection. Except for the smaller illustrations that demonstrate programming and design, they don’t add to the narrative but fortunately don’t meaningfully detract from it either.

Nonetheless, I enjoyed Creative Selection a lot and recommend it. The book falls squarely in a creative productivity space which I, and I expect many MacStories readers, find fascinating. Beyond just providing fun insider stories about products we use every day, Kocienda has succeeded in putting his finger on some fundamental elements that contribute to Apple’s success that are also valuable lessons for anyone involved in creative pursuits regardless of whether that’s at a big company like Apple.

Creative Selection is available in iBooks and on Amazon.