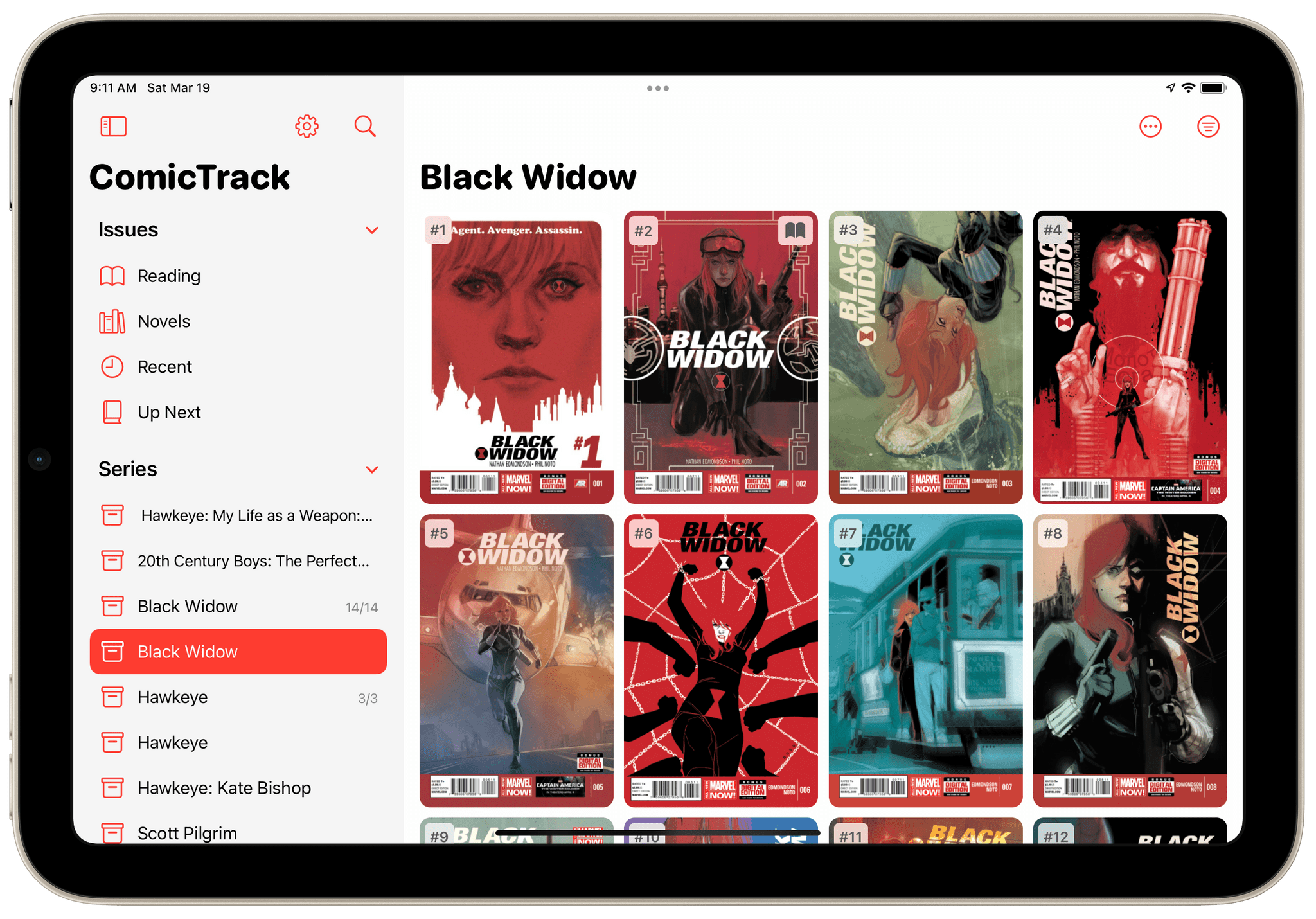 ComicTrack is a new app from Joe Kimberlin for tracking and organizing the comic books you’ve read, are currently reading, and want to read. The idea is similar to his excellent videogame tracking app, GameTrack, but applied to comics. I’ve been using ComicTrack for a couple of weeks now, and it’s excellent. Of course, you’ll also need a separate app to read your comics, but having a dedicated app to organize what I’m reading and plan to read has single-handedly gotten me back into reading comics more regularly. 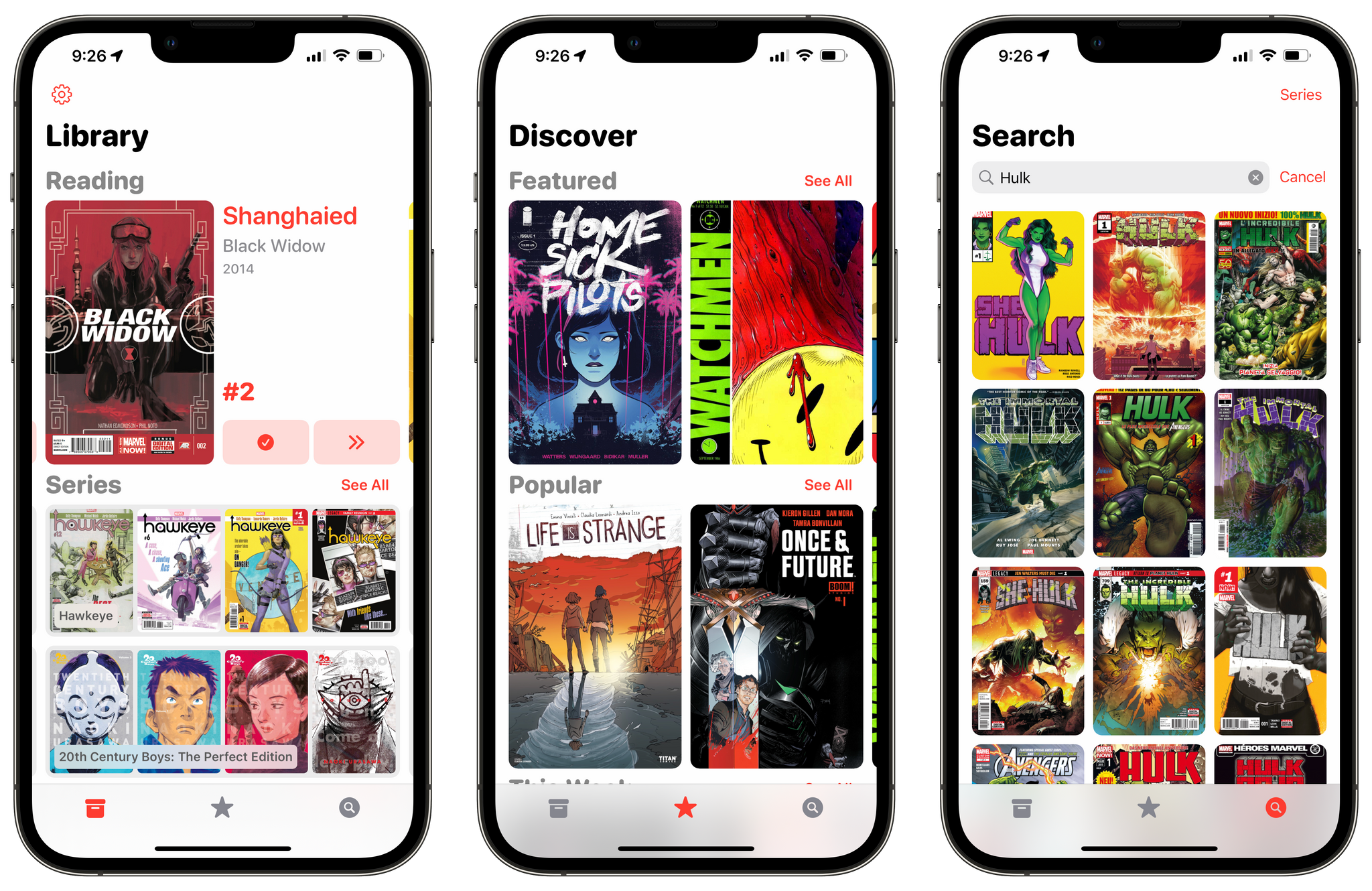 For context, I’ve always been a very casual comic book fan. I have Comixology and Shonen Jump installed on my iPad mini, but I often go weeks or months without touching either. It’s not a lack of interest, so much as a combination of not knowing where to start and having limited free time. ComicTrack hasn’t magically granted me more free time, but it has made getting started much easier by reducing the friction of picking something to read.

ComicTrack on the 12.9” iPad Pro in dark mode

I’m going to focus on the iPad version of ComicTrack because that’s where I read most of my comics, but the app also works and looks great on the iPhone and Mac, as you’ll see in the screenshots below. Everything syncs over iCloud too. Also, although I spend most of my time using the iPad version of ComicTrack, I find the iPhone and Mac apps indispensable for collecting new ideas of things to read. I run across comic books all the time via RSS, Twitter, podcasts, and friends’ recommendations. That doesn’t just happen when I’m using my iPad, but with ComicTrack on all the platforms I use, it’s easy to add something that catches my eye. 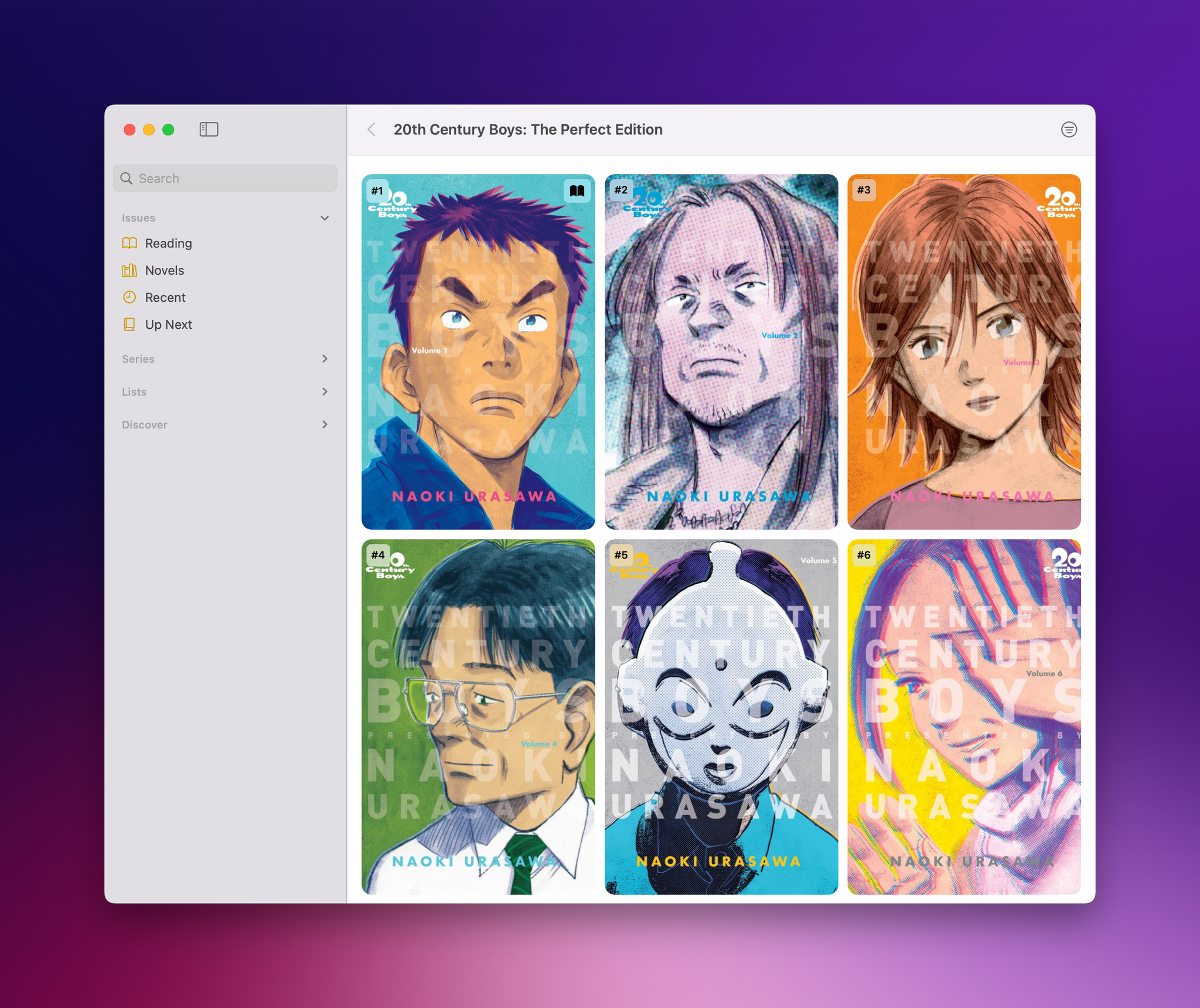 On the iPad and Mac, ComicTrack uses a two-column layout with a sidebar on the left and content on the right. The sidebar can also be hidden to maximize the space available for your comic book collection. The iPhone uses a tab bar for moving between the app’s sections. ComicTrack’s sidebar can be hidden.

The tinting used for most of the app’s text and buttons can be adjusted in Settings allowing you to pick between 11 different colors. There are also 18 icon choices available and light and dark themes, letting you pick from a wide variety of great looks. Regular and Compact layouts on the iPad mini.

The content pane of ComicTrack displays a grid of cover art for each title by default that can be set to ‘Regular’ or ‘Compact.’ I prefer Regular sized art, but Compact is a nice option if you track a lot of comics. There’s also a list view option in the app’s settings that on an iPhone or compact iPad size class arranges items in horizontal lists instead of a grid of four items per category. The sidebar is where you organize your library. It’s divided into collapsable sections called Issues, Series, Lists, and Discover. Issues has four subcategories for comic books you’re currently reading, novels, recently added content, and an Up Next list that collects the next unread issues you’ve added to the app. As you can probably guess, the Series section collects multi-issue series of comic books. 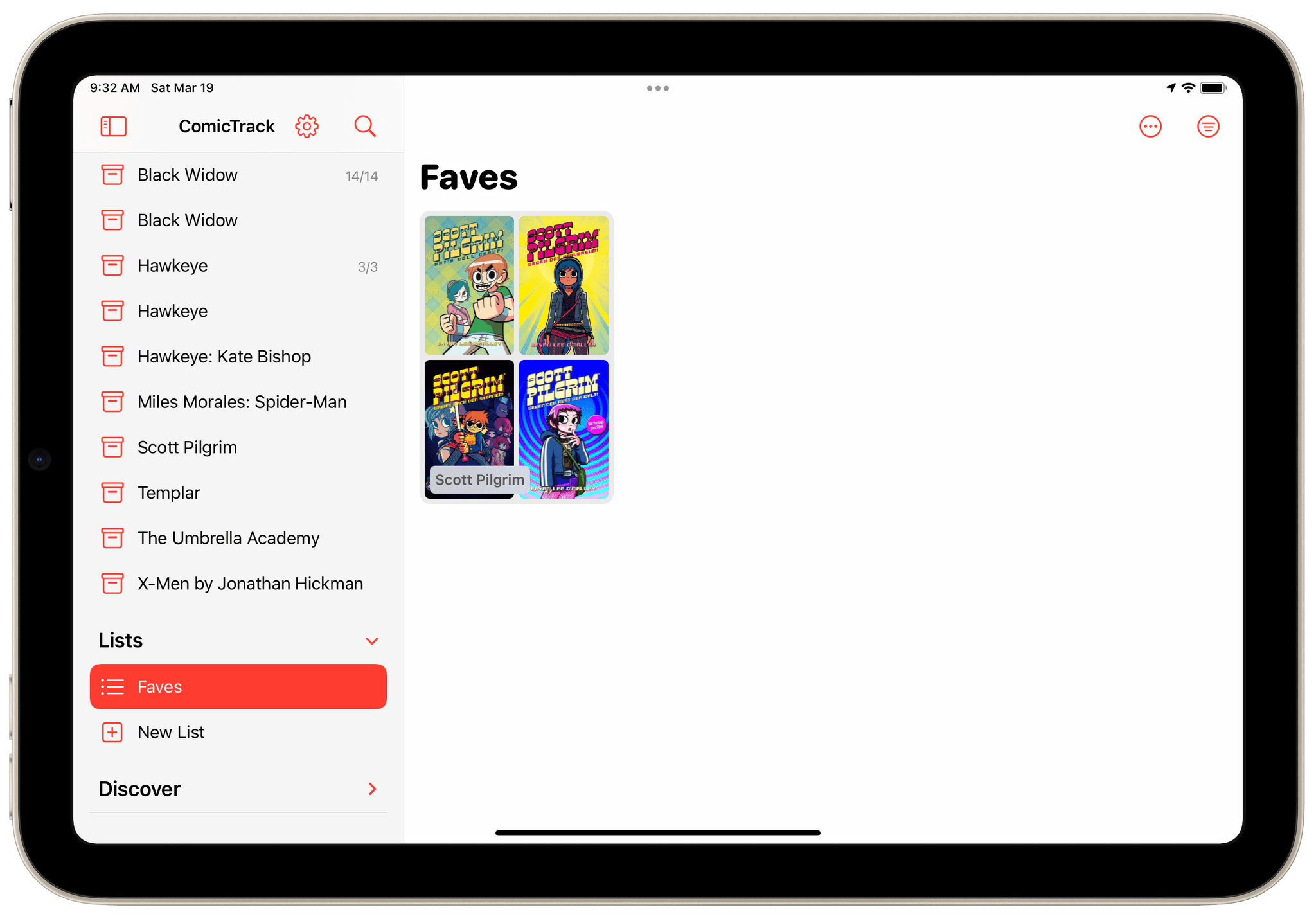 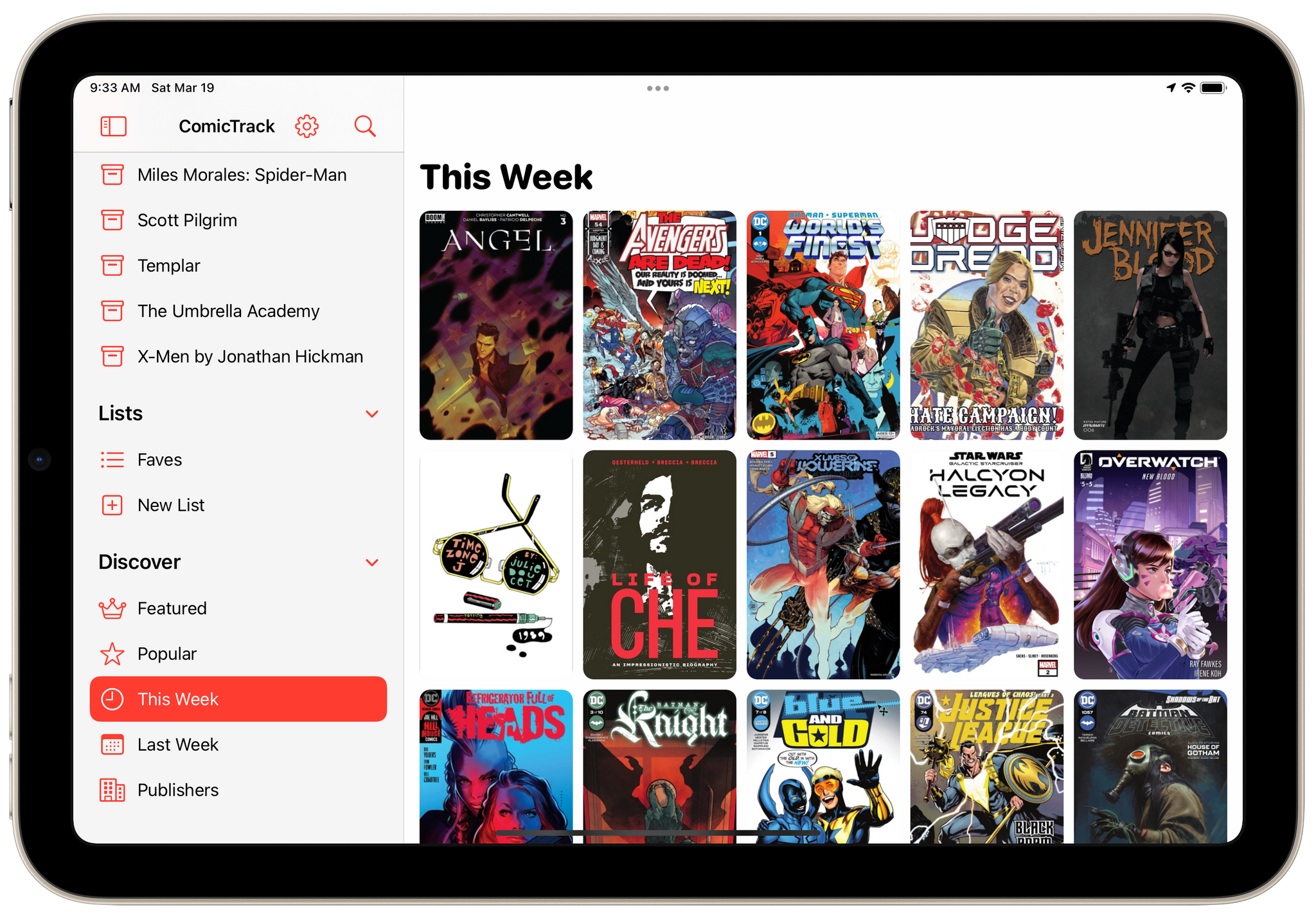 The Lists section is for user-defined lists. I haven’t used this section much yet, but I’ve created a Faves list for series that I’d recommend to others. Finally, the Discover section is broken down into four ways to explore new material: Featured, Popular, This Week, Last Week, and Publishers. ComicTrack uses ComicVine for its search engine, so I assume that’s where this content is pulled from too. If you’re at a loss of what to try next, Discover is a nice way to browse what’s new and popular. 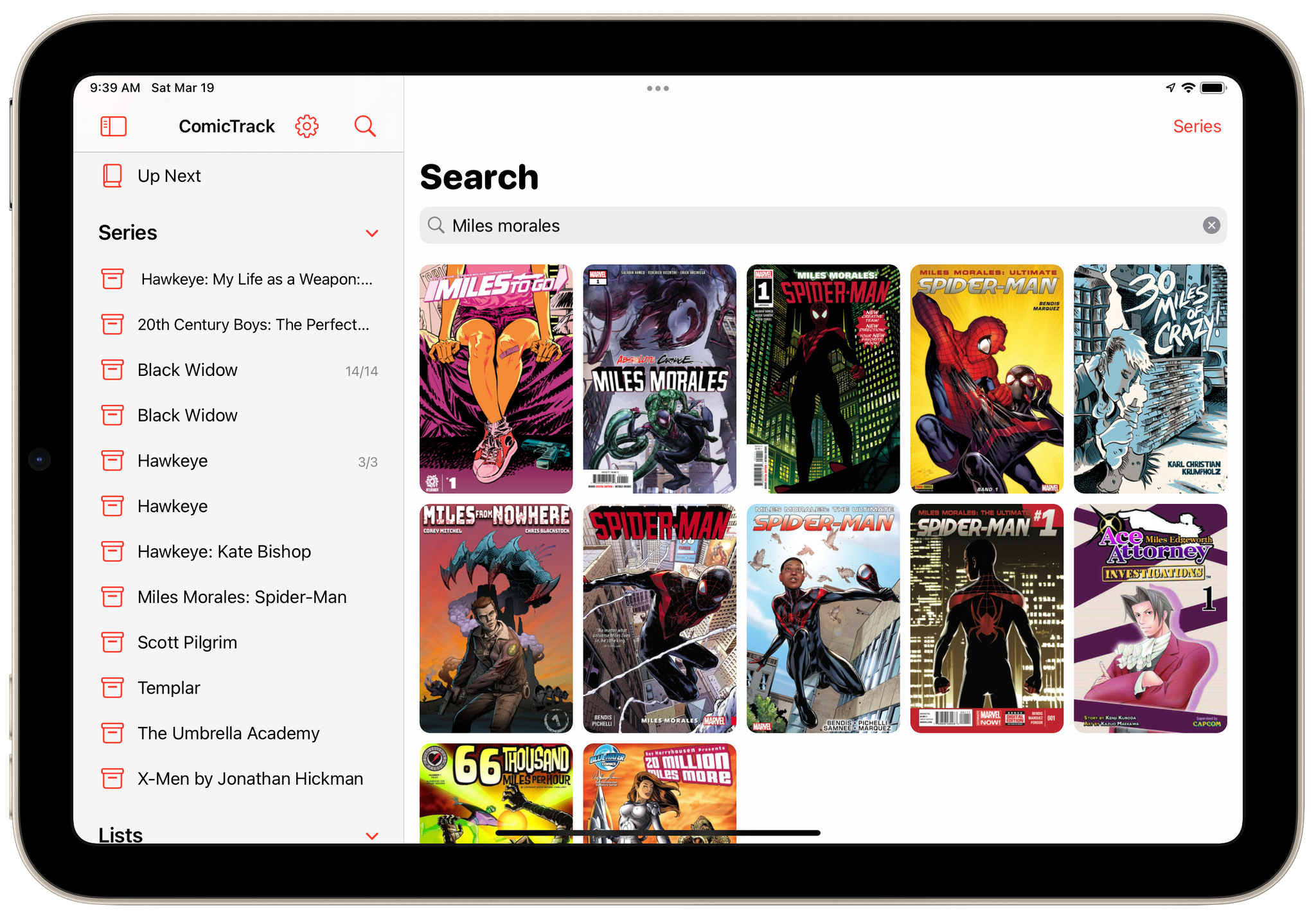 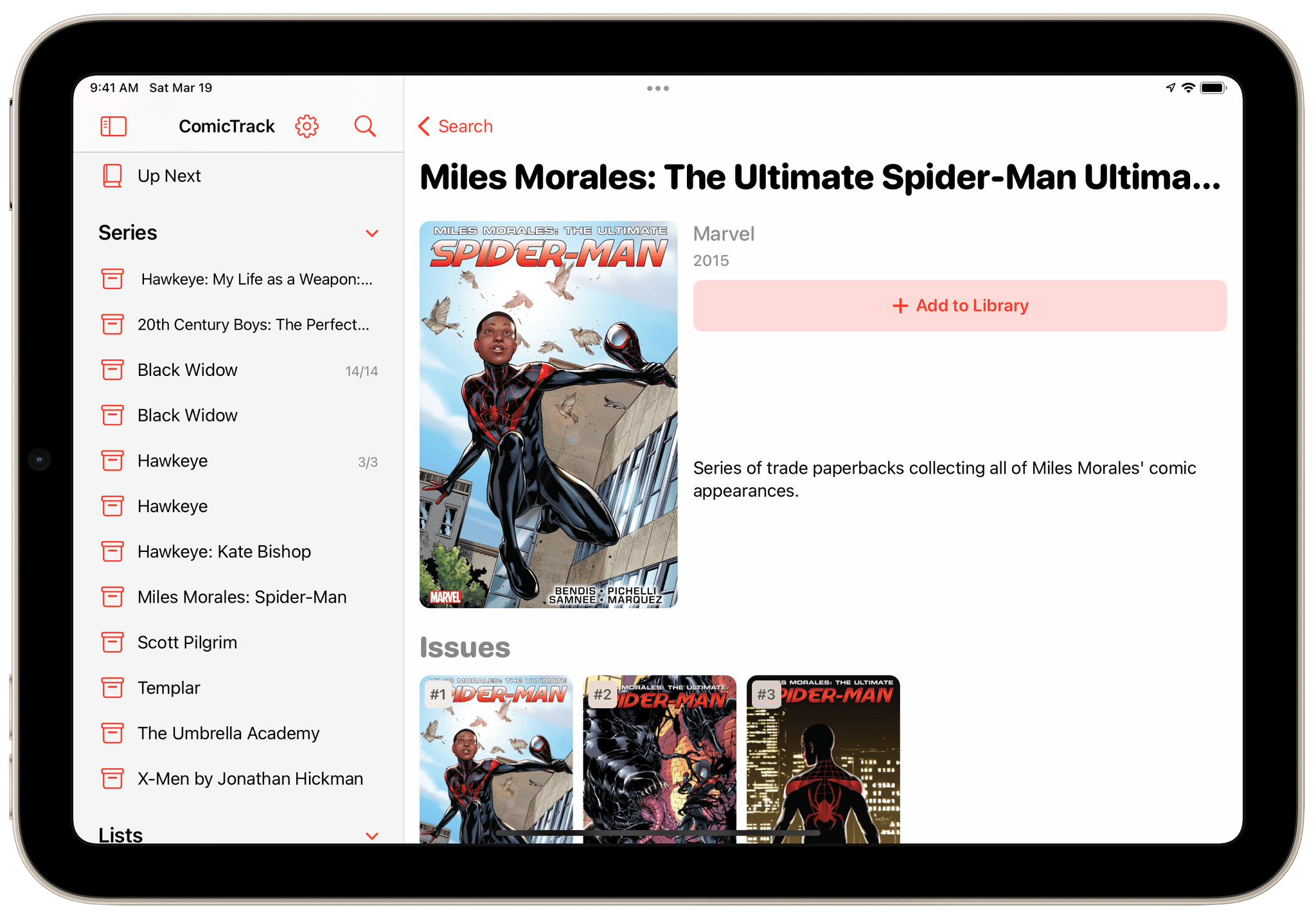 Adding an issue or series.

Adding comic books to ComicTrack is simple. There’s a search button at the top of the screen that searches ComicVine’s extensive database. In my experience, the results are quite good, although sometimes the existence of multiple versions of a comic book can make picking the one you want a little difficult. If you tap on a series from the app’s search results, you can add the entire series or pick individual issues, which you’ll find at the bottom of the screen beneath the series description. I’ve generally found myself adding series to ComicTrack, but I’m glad the flexibility is available to pick and choose individual issues. A series will show all issues unless filtered out, but Up Next shows the latest unread issue.

When you add a new issue or series, you’ll see a new entry in the series section of the app that has either the individual issues you’ve added or every issue in a series if you added the entire series. The first issue in each series will also show up in the Up Next list under Issues. Then as you work your way through issues chronologically, marking them as read will update your Up Next list with whichever issue in the series is next in line. New issues added to a series will appear automatically in ComicTrack as they’re published too. 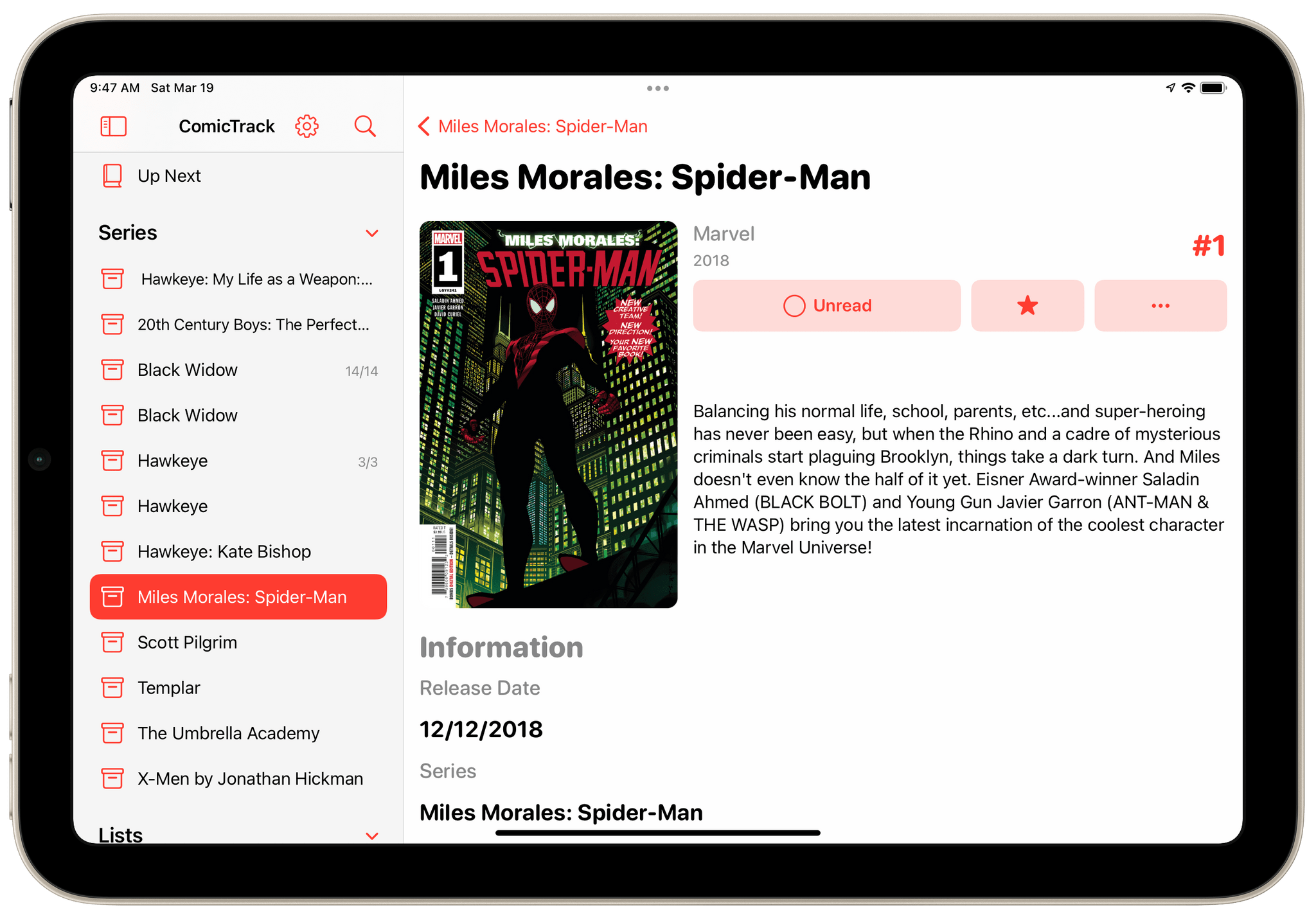 The detail screen for an individual issue added to ComicTrack.

With a collection of series and issues saved in ComicTrack, it’s time to pick something and start reading. Tapping any issue pulls up a summary and related metadata like the release date, plus buttons to mark an issue as unread, read, or reading, a five-star rating system, and options to add the issue to a list you’ve created or delete it from the app. The same options are available by long-pressing on an issue’s cover art, which is how I usually manage issues. Long-pressing on an issue in a series has the added advantage of letting you mark all earlier issues as read at one time, which is handy if you’re adding a series of which you’ve already read several issues. 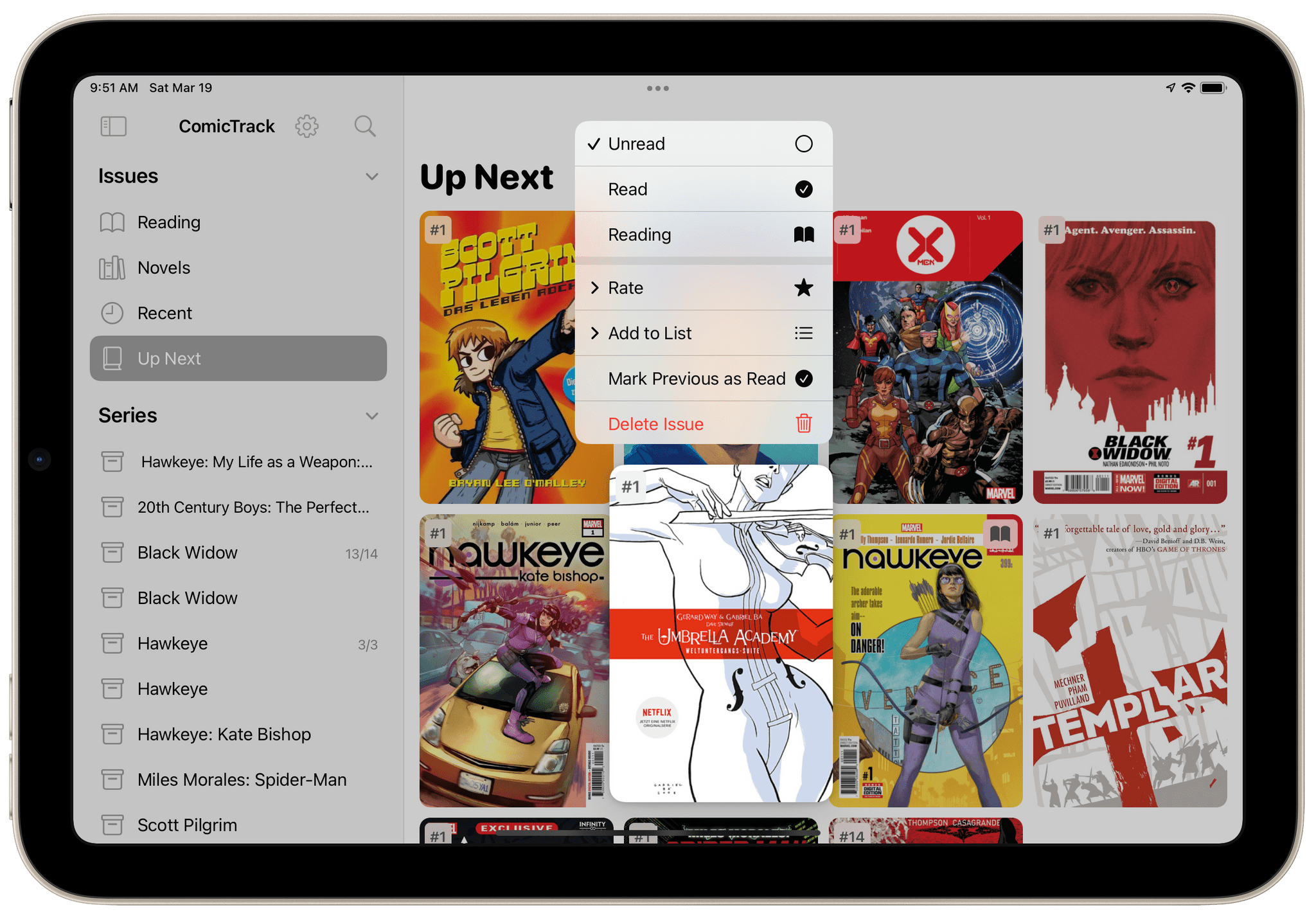 There are a few additional options that are unique to series too. If you select a series, More and Filter buttons appear in the toolbar. Tapping More allows you to add the series to one of your lists, rate the series as a whole, mark all of its issues as read, or delete it. The Filter button lets you filter a series by reading status, sort by name, issue number, or rating, and list issues in ascending or descending order. 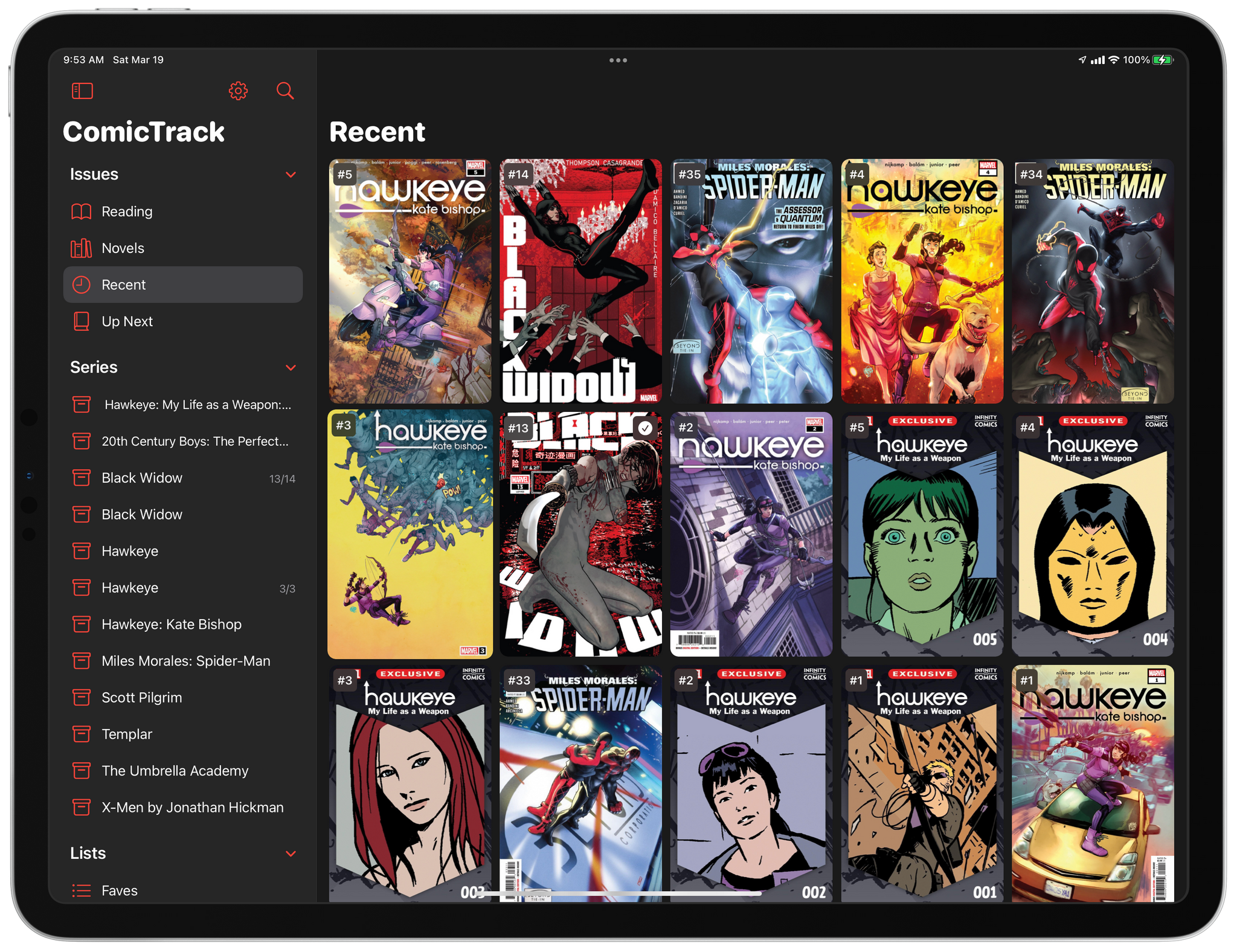 ComicTrack makes picking up where you left off with your favorite comics simple.

I love ComicTrack for many of the same reasons I’m a fan of GameTrack. There are more comic books that I’d like to read than I’ll get to, which is the same problem I have with videogames. That problem isn’t going to be eliminated by either app, but both help with picking what to read or play next. Because I don’t follow comics closely, having a place to store what looks like something I’d like to read later has been fantastic. I immediately tossed some series I’ve partially read, old favorites I want to revisit, and a few new series into ComicTrack. Over the past couple of weeks, the app has made it much easier to sit down and pick up where I left off in a series or try something new. That should also make it easier to get back into a series when I inevitably get busy and take a month off from reading comics.

I’m also glad this is a separate comic book-focused app. Some types of media fit neatly into a generalized structure allowing media like movies, books, and music to be combined into one tracking app. Because comic books are serialized, though, the extra layer of organization between series and issues makes having a dedicated app a better solution. If you read comic books occasionally like I do or a lot, I highly recommend trying ComicTrack. The design, flexibility, and multi-platform features of ComicTrack, make it the best way I’ve found to organize your comic book reading.

ComicTrack is available on the App Store. The app is free to download and try, but unlimited series, reading lists, tint color options, additional icons, and multiple layouts require a subscription for $1.49/month or $9.99/year or as a one-time payment of $34.99.