BestPhotos, a photo management app from Chicago-based Windy Software that we’ve covered on Club MacStories before, was updated today with new features for quickly and efficiently organizing your photos. I take thousands of pictures each year and sometimes it feels like I take even more screenshots. Sifting through to find the best shots and discard old screenshots, duplicates, and just plain bad photos takes a lot of tapping and time in Apple’s Photos app. BestPhotos is a better solution that streamlines the whole process.

From the Library view of BestPhotos, you can view your entire collection of photos or filter them by areas that may need attention like images that are missing location data, portrait mode photos that include a regular copy of the image that you may want to discard, HDR images and non-HDR copies of the same image, short videos that were probably taken by mistake, vertical videos, iOS screen recordings, duplicates, and similar photos. You can also filter by images taken today, this week, month, or year, album, and the smart albums created automatically by the Photos app. The filters, which are available as Siri shortcuts too, are a good way to tackle an entire category of common issues that might be cluttering up your library, which can be a much less daunting task than taking on your entire library at once.

There are buttons in the toolbar along the top of the library view that provides statistics about the photos you’ve taken over the past year. You can also access BestPhotos’ settings and select one or more photos for batch deleting or adding to an album. Images, other than Live Photos and videos, can also be rotated or shared via the share sheet from here.

Tapping on an image expands it from its thumbnail so you can take a closer look. Using the gesture popularized by Tinder, swiping left on a photo marks it for deletion, and swiping right marks it as a favorite, though the delete or favorite actions can be substituted with a hide photo action instead. The same actions can be accomplished by tapping corresponding buttons in the bottom toolbar too. The changes aren’t saved until you tap done in the toolbar, so there are plenty of opportunities to change your mind. The Tinder-style swipe gesture is a quick way to mark photos but eliminates swiping on the photos to navigate between them. Instead, BestPhotos relies on a scrollable tape of thumbnails along the side of the image preview and forward and back arrows in the toolbar along the bottom of the screen.

I like the swiping gesture for marking photos for deletion or as favorites a lot, but initially, it was hard to restrain myself from reflexively swiping to navigate. I think it would help to make the thumbnail strip a little wider and the navigation buttons a little bigger. That would sacrifice some image viewing space, but they strike me as a little too small given the app’s unique navigation model.

One way to minimize navigating your library is by turning on the ‘Auto Advance Photos’ setting. When enabled, the feature advances from one image to the next when an image is marked for deletion, as a favorite, or for hiding by tapping the buttons in the bottom toolbar. There are also keyboard shortcuts for navigation as well as toggling particular modes and actions if you use the iPad version of the app with an external keyboard. 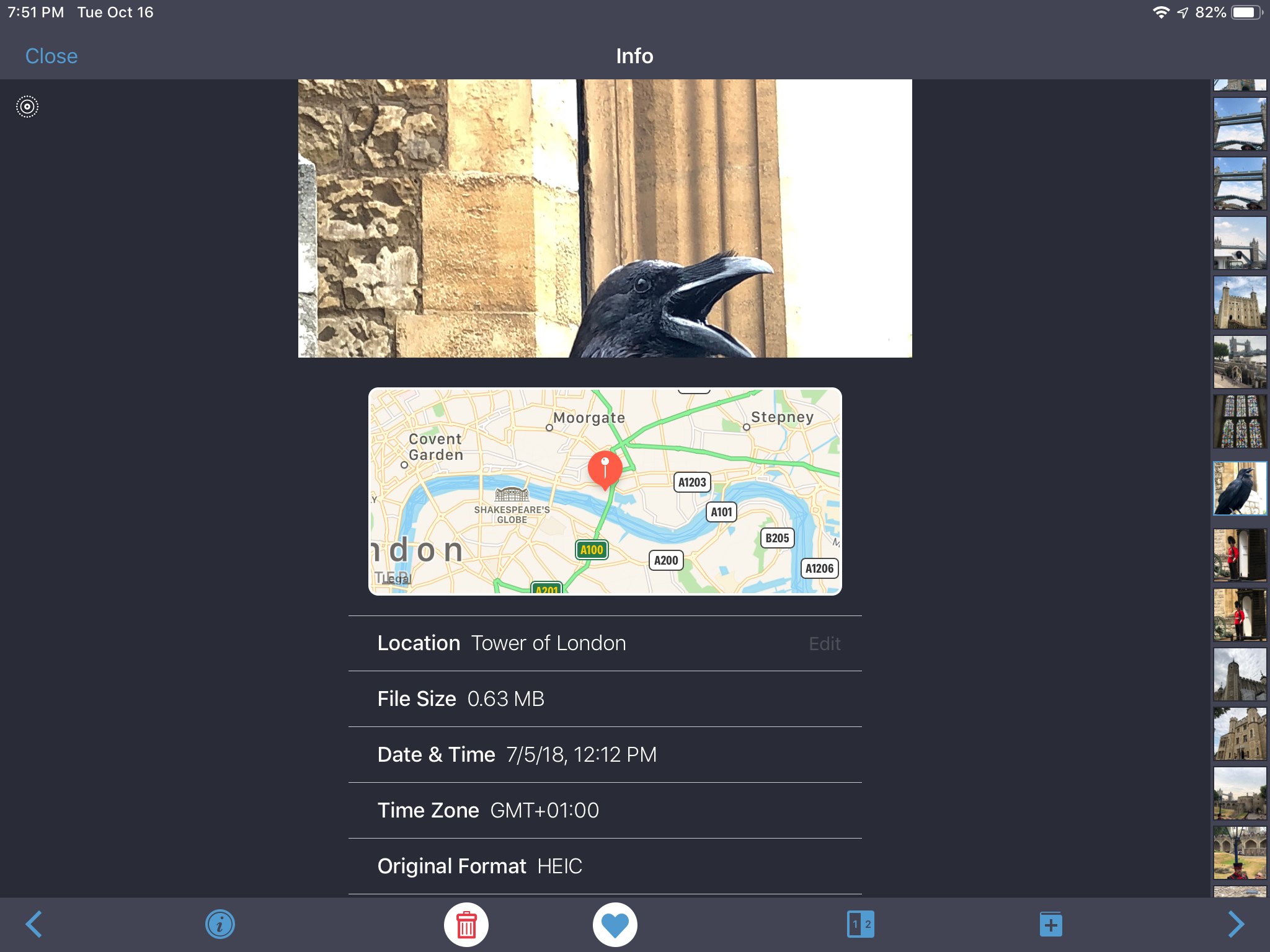 Along the bottom of the image preview screen, there are buttons to compare two images side-by-side, which is valuable when deciding which of two similar images to discard, a button for adding photos to an album, and a button for viewing metadata. Cropping, rotating, and sharing (including sharing a small, email-friendly version of an image or one without location data) are also available for any image except Live Photos and videos.

My photo library is a mess, and although I don’t plan to go through them all, BestPhotos has already been a painless way to begin the process of cleaning up my most recent pictures. The app’s navigation takes some time to get used to, but the ability to compare two similar photos side-by-side, the quick, broad swipe gestures for marking photos as favorites or for deletion or hiding them, and the smart filters for finding trouble areas in your photo library are all reasons to consider BestPhotos.

BestPhotos is available on the App Store as a free download. An In-App Purchase of $2.99 unlocks all of the app’s features.