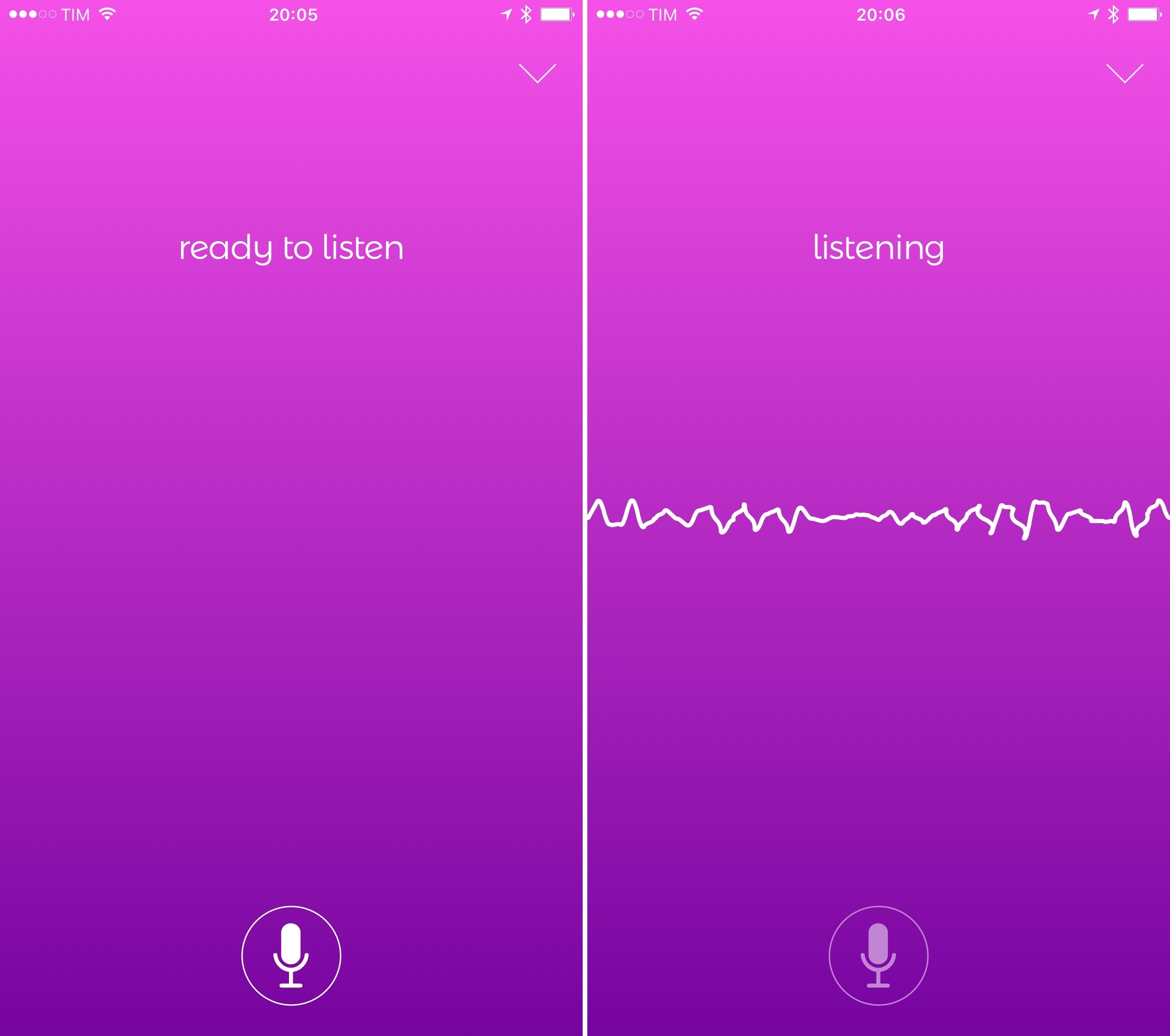 I use my Amazon Echo a lot. Since importing one from the U.S. last year, I’ve started using web services that provide native integration with Alexa, the platform that powers Amazon’s speaker. Whenever I come across a new web service I could use, I check if they have an Alexa skill too. I like Amazon’s take on the home assistant so much, I recently added an Echo Dot to my setup, which has further increased my usage of Alexa and connected services.

There’s one big problem with the Amazon Echo, though: Alexa has no iPhone presence, and Apple is never going to give up the prime spot of Siri on their devices. Amazon has an Alexa app, but it’s a clunky wrapper for a web view that has no voice functionality whatsoever. So while Siri has improved with iOS 10, it’s still behind Alexa in terms of third-party integrations. I often find myself wishing I could ask Siri what I ask Alexa to do for me at home. I have to confess that I even considered an Amazon Tap – the poorly reviewed portable speaker with Alexa support – only to have some way to summon Alexa when driving.

Thankfully, developer Thaddeus Ternes sees this as a problem as well, and he created Astra, an iPhone app to issue requests to Alexa via voice. You might remember Ternes from Lexi, the predecessor of Astra that also allowed you to use Alexa on the iPhone. Lexi was pulled from the App Store and it’s coming back as Astra, which sports a new design, support for timers and alarms, and background audio. After testing Astra for the past two weeks, I decided to put it on my Home screen and it’s quickly become one of my most used iPhone apps when I’m not at home.

Astra is, effectively, just a large microphone in the middle of the screen. You can sign into your Amazon account, give the app permission to record audio, and start sending messages to Alexa. To record a command, you hold down a Siri-like microphone button and then lift your finger to send a request to Alexa. When Astra displays a ‘Thinking…’ message it is not, in fact, processing your request on its own – the Alexa Voice Service is; Astra is just waiting for a response to speak back to you. Astra is a bridge to Alexa’s cloud brain: there are no visual messages and no interface elements built around Amazon’s assistant. Even the audio responses use Alexa’s standard voice.

And it’s because of this simplicity that using Astra creates the illusion of having a small Amazon Echo inside your iPhone. Astra – and therefore the Alexa Voice Service – can integrate with all the skills you’ve already configured with your Echo. I was able to ask Astra to add new tasks in Todoist, and Alexa performed the action like it would if activated from an Echo. I asked about the weather, my TV shows in Trakt, and my agenda from Google Calendar; Astra always came back with a response sent by Alexa.

Perhaps more impressively, Astra can be used to control connected home devices through the Alexa Voice Service over the Internet. I can use this app to turn on my coffee maker when I’m walking up to my house and I’m still on 4G; I can turn on my Hue lights and even specific scenes thanks to the existing Hue integration; I even tried to turn on my television (connected to a Harmony hub) with Astra and Alexa, and it worked. When I arrived at home, the TV was on, my living room lights were red, and I treated myself to a good espresso thinking that reviewing apps can be pretty cool sometimes. 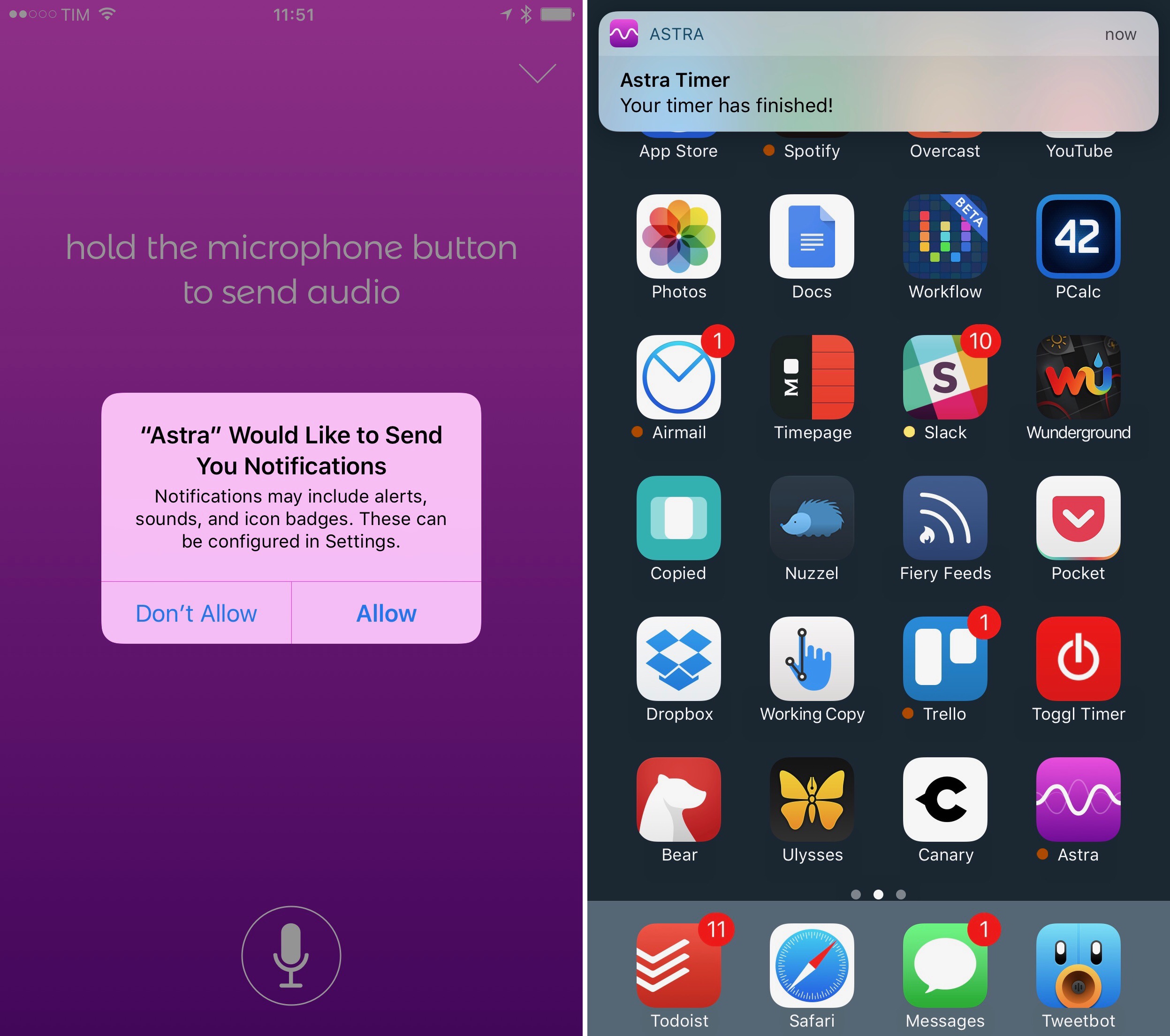 An Alexa timer delivered by Astra.

Unlike the former Lexi app, Astra has support for background audio and it can set both timers and alarms. I ran across issues with flash briefings (audio tracks didn’t play at all), but timers and alarms were sent as push notifications to my iPhone from Alexa – the Echo speakers at home didn’t go off. I’m not sure I need Alexa to set a timer when I’m out (that’s one area where Siri excels), but it’s good to have options.

In my tests, Astra was able to perform most of the actions that I can ask Alexa to do on my Echo speakers. Alas, one of my favorite Echo features – Spotify playback – isn’t supported by Astra: if you ask the app to play some music from Spotify, Alexa will reply with an error message. If it’s not a technical limitation imposed by Amazon, I would love to have a way to stream Spotify to my iPhone with Astra. And while the app does have an astra:// URL scheme to open it, I would like to see support for 3D Touch quick actions on the Home screen to enter recording mode. Finally, it’d be nice to have haptic feedback on the iPhone 7 to feel when the microphone button has been pressed and when a message has been heard.

An app like Astra will never be as tightly integrated with iOS as Siri. Looking ahead, it’s also likely that Apple will consider a smart speaker with Siri integration and extend the domains available in SiriKit for third-party apps. But until that day comes, the Amazon Echo and Alexa allow me to interact via voice with services that Siri doesn’t support, and Alexa skills have become a staple of our household. Astra brings most of that convenience to an iPhone app that is fast and intuitive, but, more importantly, consistent with Alexa’s usual behavior. If you miss your Amazon Echo when you’re not at home, Astra is for you.

Astra is available on the App Store.