Today, Gui Rambo released version 2.5 of AirBuddy, his Mac menu bar app for connecting and managing wireless headphones and other devices. AirBuddy has come a long way from its origins as an app that simply connected AirPods and some Beats headphones with your Mac. The app still does that well, but as I wrote about AirBuddy 2.0, the app is a fantastic way to monitor the charge status of a wide variety of devices and hand their connections off from one Mac to another. With the latest version, the app’s core features are faster and more reliable, the UI has been refreshed with a Monterey-friendly design, and there are some excellent new features, too, so let’s dig in.

Connecting to your devices and handing them off to another Mac is noticeably faster with AirBuddy 2.5. Open your AirPods’ case, and the app’s UI for connecting appears immediately. As I covered with version 2.0, AirBuddy can also transfer your Apple trackpad, mouse, and keyboard connection to another Mac, using a feature called Magic Handoff. Today’s update introduces version 2.0 of that feature, which is faster and has been reliable in my testing. The latest version of the feature will even attempt to wake a target Mac up if it’s in sleep mode. Handing off input devices isn’t something I do regularly, but it can be handy if you work across a desktop and laptop Mac or run a headless Mac server, for example.

AirBuddy’s battery widget checks the charge status of devices connected to your Mac more frequently now, so the remaining charge that is reported should be more accurate than in the past. The widget’s design has also been updated to offer a new monochrome theme that works with the small and medium-sized widgets.

Besides connecting headphones, monitoring the charge status of my devices is what I use AirBuddy for the most. The app includes configurable alerts that can be displayed to send a Mac system notification when the charge drops below a certain percentage. Alternatively, you can use AirBuddy’s more compact built-in circular notifications, which include the ability to play an alert sound. Notifications can remain onscreen until dismissed too. I’ve found that my most valuable battery alerts are the ones for the devices with the longest-lasting batteries, like my Magic Keyboard and Trackpad because they’re the ones I always forget to plug into power.

I’ve been using a keyboard shortcut to switch between transparency and noise cancellation modes with my AirPods Max and love being able to toggle between modes without fiddling with the on-device buttons. 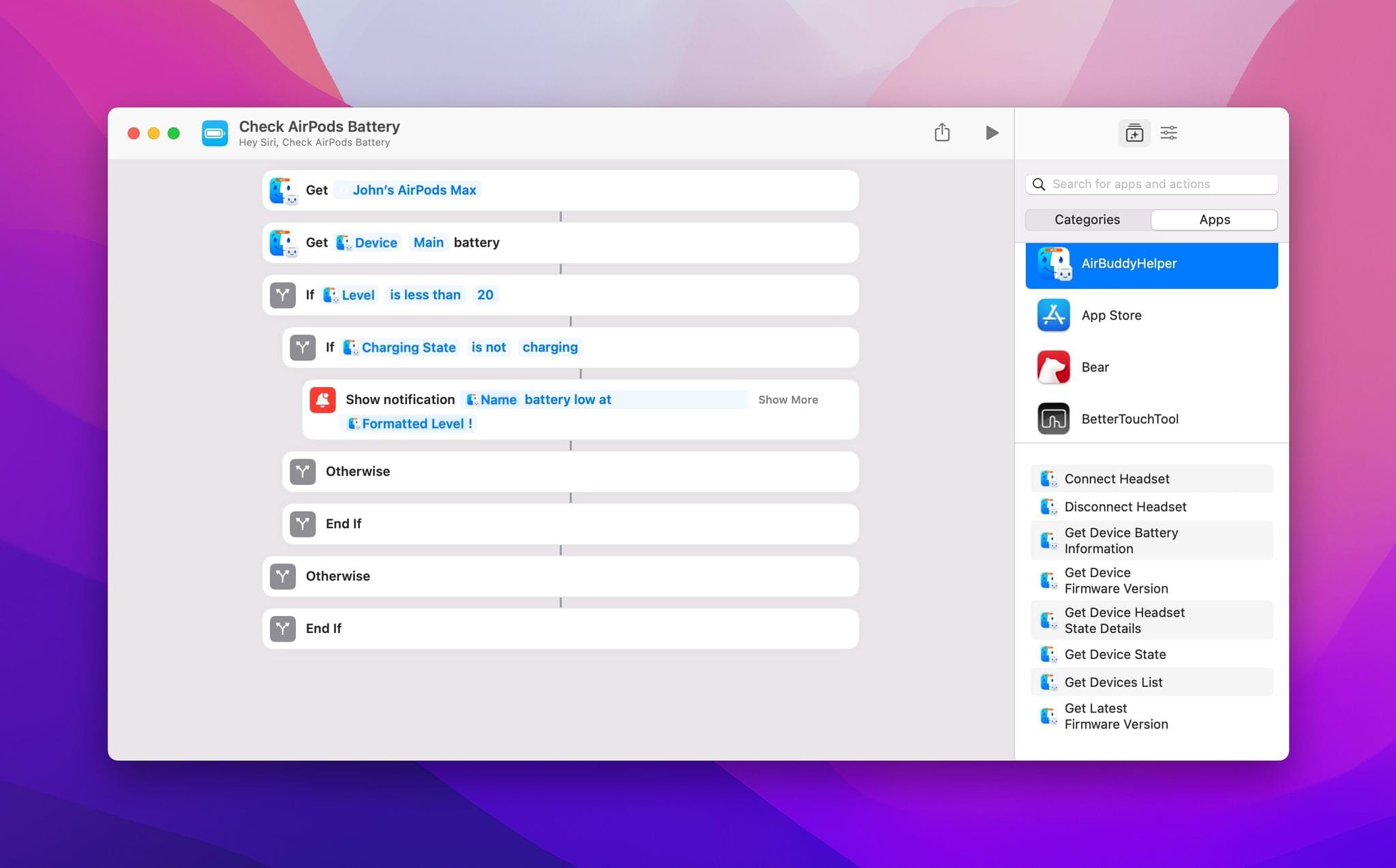 AirBuddy also includes Shortcuts for Mac support, including actions for connecting and disconnecting devices, getting lists of devices and their state, charge, and firmware version. The actions provide parameters for maximum customization of your shortcuts. For example, you could create a shortcut to connect your AirPods to your Mac in transparency mode with your microphone enabled as part of a video call setup shortcut.

There is a long list of other refinements to AirBuddy that version 2.5 introduces, too, including support for Sony WF and WH headphones, although some of the app’s features aren’t supported since Sony’s headphones don’t feature Apple’s W1 or H1 chips. There’s also a new Advanced tab in Preferences for clearing cached data, transferring your battery alert setup to another Mac, and more.

AirBuddy’s preferences have been redesigned too.

AirBuddy has been one of my favorite menu bar utilities since its debut. I’ve always appreciated how easy the app makes it to connect wireless headphones to my Mac and adjust their settings. However, because so many of the devices I use every day are rechargeable, I’ve come to rely on the app’s battery alert system just as much. It’s become the one-stop hub for connecting Apple accessories and charging them that Apple should build into the OS but hasn’t.

The biggest improvements in AirBuddy 2.5 are under the hood. They don’t change how the app works, but they meaningfully improve the day-to-day experience of using the app. Coupled with refinements to battery alert notifications, Shortcuts support, keyboard shortcuts, and many other smaller design and feature tweaks throughout the app, AirBuddy 2.5 is an excellent update for anyone juggling multiple wireless devices with their Mac.

AirBuddy 2.5 is a free update to current users of the app. If you don’t own the app already, you can purchase a copy for $9.99 on AirBuddy’s website.