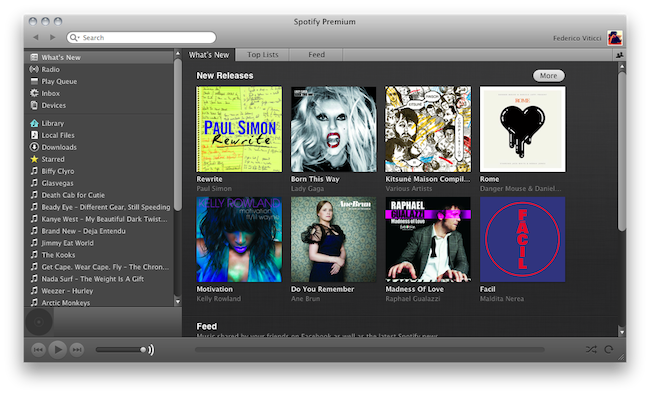 According to an article by Eliot Van Buskirk at Evolver.fm (republished by Gizmodo), US record labels are waiting for Apple’s rumored iCloud music service to launch publicly before closing the remaining deals that are preventing Spotify, a popular music streaming service, from launching in the United States. Several rumors claimed Apple is working on an online interface for iTunes to allow users to upload and stream their music collections from the cloud, with a report from last night suggesting Apple will adopt a system similar to Lala (which they acquired last year) to scan a user’s library and mirror songs to their servers, also offering subscriptions and possibility to get access to higher-quality versions of the same songs.

We heard an interesting theory the other day from a well-connected source: Record labels accustomed to receiving big checks from Apple want to give Steve Jobs and company a crack at offering a music subscription service to Americans before Spotify enters the ring, so they’ve been dragging their feet (i.e. demanding too-high payments) in their negotiations with Spotify, preventing it from launching here until after Apple’s cloud music service does.

Spotify has long been rumored to be getting ready for a US launch, though the European company never managed to ink the final deals with the Universal Music Group and Warner Music group. It was previously reported that Spotify had signed papers with Sony Music and EMI for a US launch, alongside the fact that record labels were demanding the adoption of premium subscriptions only, forcing Spotify to ditch their freemium model if they wanted to launch in the US. On the other hand, Apple is believed to be approaching the final stages of negotiation with Universal Music Group, as EMI, Sony and WMG are already on board for the iCloud announcement at WWDC. Others have also reported Apple will have to finalize deals with music publishers, besides labels, before launching any music service, with negotiations also quickly moving forward on that end.

Evolver’s article reminds of an old rumor that claimed Apple executives (including VP of Internet Services Eddy Cue) were pressuring labels to decline Spotify’s offers to prevent the European company from launching a freemium music service in the US. However, the new theory seems slightly different in the way the labels are willing to wait for Apple’s iCloud to become available before closing deals with Spotify. Spotify currently offers desktop and mobile applications to listen to an online music catalogue thanks to the deals the company has signed with European labels. Apple’s new service is rumored to offer a similar setup, with iOS devices capable of streaming music from the cloud and iTunes for Mac and Windows handling uploads and other functionalities.