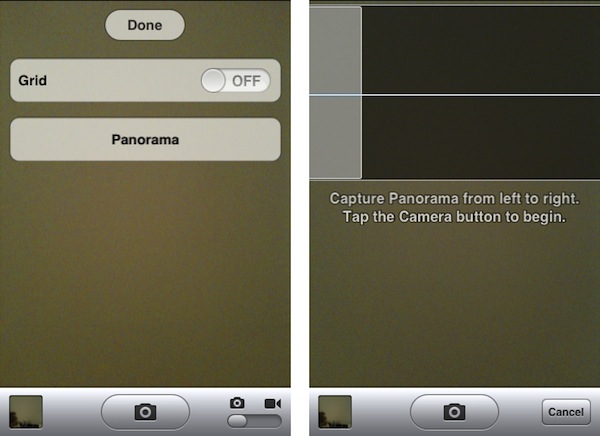 Shortly after the first beta of iOS 5 was seeded to developers in June, a series of code strings suggested the company could implement a panoramic photo-taking feature in the OS, allowing users to shoot wider photos with a Panorama functionality allegedly similar to what third-party apps like 360 Panorama and Pano are already offering. As Apple kept seeding more betas and eventually released iOS 5 to the public, Panorama was nowhere to be found in iOS, suggesting Apple wasn’t ready to debut the feature yet.

A series of screenshots posted by programmer and iPhone hacker Conrad Kramer earlier today, however, show the interface and options for what could have been Panorama in iOS 5. In particular, the screenshots show a very simplified UI to take multiple shots in a single camera session “from left to right”. It is unclear whether the design of the functionality was final but Apple decided to save it for a future version of iOS, or if the company decided Panorama wasn’t simply good enough for iOS 5. While Kramer seems to promise a Cydia tweak will be released to easily activate the feature on jailbroken phones, developers can play around with Panorama by manually changing a key on their devices. The resulting image of an iOS Panorama has also been posted on Dropbox showing a far from perfect output, although we can’t speculate on how the picture was taken, or the stability of unofficial, hidden iOS 5 functionalities.

As we mentioned above, those willing to check out panoramic photos on iOS right now should check out Occipital’s 360, which we reviewed here and here. Apple is working on an iOS 5.0 update that will introduce security fixes, better battery life and gestures on the original iPad, but Panorama wasn’t mentioned in the release notes for the new beta software.