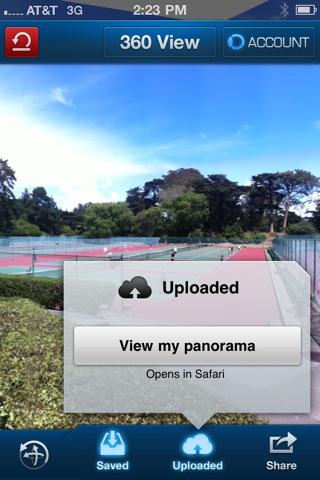 Occipital’s 360 Panorama is an iPhone app we first reviewed in December that, through an intuitive interface, allowed you to snap a panoramic shot using your iPhone by simply panning it around to capture things around you. The concept was simple: instead of merging multiple shots into a single panoramic one like most apps do, 360 let you “paint” the panorama on screen by waving the iPhone and making sure light conditions were optimal. A few weeks later, Occipital also showcased the gyroscope support for 360 shots uploaded online and visible in Mobile Safari, thanks to the new API introduced in iOS.

360 Panorama is receiving a major update today, bringing the app to version 4.0 and introducing a new icon, a redesign interface and brand new social features to share photos online and browse panoramas shared by other users. As in the previous version, you can see a panorama being built in real-time as you move your iPhone’s camera around; panorama quality has been improved in the new version, thanks to a new algorithm used by Occipital that will also increase quality over time by processing the image synthesizing server-side. After a few tests, it really looks like Occipital has managed to find a way to create even better panoramas, which were good-looking in 360 version 3.0 but far from perfect. The interface has been redesigned and streamlined to be more intuitive, elegant and accessible; the sharing functionalities on Twitter and Facebook have been completely overhauled to make it easier to send a panorama off to your favorite social network, and Occipital also took care of implementing private uploads and deeper sharing options. On top of that, the app now supports multiple Facebook and Twitter accounts and the image saving process has been made faster to allow users to build a panorama and share it in seconds. 360 Panorama now works on the iPad 2 as well, with the engine being optimized to take advantage of the device’s dual-core CPU.

Last, Occipital is also launching an all-new online interface for panoramas called 360verse that allows users to browser for pano shots using a search functionality based on location and time of upload. Furthermore, the app now packs a new 360.io shortening system, as well as the possibility to create Occipital user accounts to check out all the photos you’ve uploaded over time.

360 Panorama 4.0 has been released a few minutes ago in the App Store and it’s available as a limited time offer at $0.99. Get it here.