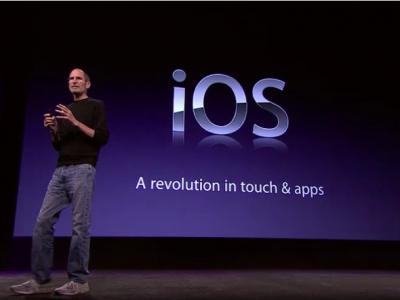 Following the speculation that Apple might soon seed a GM build of OS X Lion to developers, TechCrunch now reports the long-awaited major revamp of iOS, dubbed iOS 5, has been pushed back to fall, with a possible WWDC preview in June. The rumor is interesting because it breaks Apple’s usual release cycle and media event pattern: in the past years, Apple previewed a new version of iPhone OS (and then iOS) with a media event in March / April, and then released it by the WWDC, or soon after that together with the availability of a new iPhone model. And in the past years, this plan has worked quite well for Apple: developers had time to test the OS in the months leading up to the WWDC, whilst everyone else was getting ready for a new iPhone in June / July. According to TechCrunch, this is about to change.

Citing “two solid sources”, MG Siegler reports this year’s plan involves a preview of the new OS at the WWDC, and a public release “this fall”. Putting the pieces together, as TechCrunch also notes, pushing iOS 5 back to fall would play well with Apple’s usual music event in September. But why would Apple use the music event to do some major iOS-related announcement? TechCrunch speculates it’s all about the cloud: the rumored “music locker” service will be ready this fall, and being a major new feature of iOS 5 Apple might as well wait until September to unveil it. iOS 5 is also rumored to introduce a new UI, a new notification system, direct OS X integration.

If our sources are right, this would break the pattern of Apple unveiling the latest iOS iteration in the early spring, leading up to a summer launch alongside new iPhone hardware. The spring timetable usually reserved for an iOS roadmap event is why some were hoping Apple may just rope the details into the iPad 2 event. When that didn’t happen, rumors quickly spread that there may be another event in April to talk iOS 5 (and MobileMe). But it’s looking like that will not be the case this year.

Yet, there’s more: just as we heard in the past, this new rumor points at iOS 5 as a heavily cloud-based OS with “several new services” such as a “location service that focuses on finding friends and family members”. Again, things we discussed in the past alongside MediaStream, Photo Stream and various Apple patents that suggested new location features were coming to iOS. Last, TechCrunch claims most of these cloud services will be demoed at the WWDC, and some of them even baked into Lion. If the rumor’s true, Lion might be the first Apple OS to have these new cloud features.

At this point, the big elephant in the room is the iPhone 5: if iOS 5 is not coming this summer, where does that leave the new iteration of Apple’s most successful mobile device? MG Siegler suggests it will still be released this summer with a tweaked version of iOS 4.x. But if previous rumors about the iPhone 5 were accurate, it will be one huge tweak to accomodate all the new functionalities the iPhone 5 is said to come with. Such as NFC. Will Apple release an iPhone with major new features, running on an old version of iOS? Has Apple been secretly building a version of iOS 4.3 that’s specifically meant for the iPhone 5? We don’t know, but this iOS 5 rumor leaves many doubts (and uncovered theories) regarding the release of the new iPhone. But then again, TechCrunch also reports iOS 5 coming this fall might coincide with the release of another iPad this year.

A few weeks ago a rumor surfaced indicating Apple was planning an iOS 5 / MobileMe media event in April. The WWDC is roughly two months away from now.