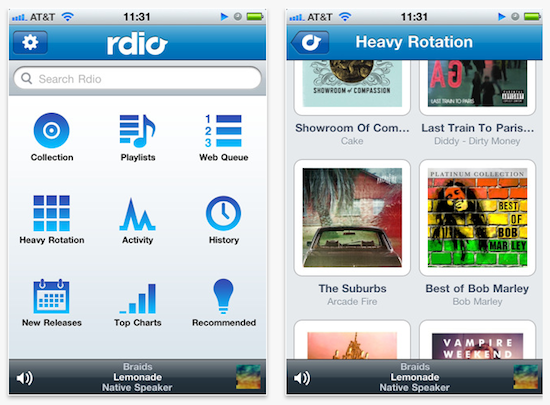 Music streaming service Rdio, quite popular in the US and Canada but currently unavailable due to regional restrictions in the rest of the world, announced yesterday the release of an API for iOS and Android devices that will allow developers to build apps that are integrated with Rdio’s music and social functionalities. The API – documentation available here and here – will let third-party devs build apps that search “all the artists, songs, albums, playlists, and top charts in Rdio’s catalog of over 8.5 million songs.” On top of that, the API will also bring playlist creation and editing outside of the official Rdio app, as well as the possibility to show a user’s Heavy Rotation, collections or follow other people. For a first release, it sounds like a solid API for iOS and Android.

Attending Google I/O 2011? Take a closer look at our Mobile API on Android devices at Rdio’s Developer Sandbox at Moscone Center in San Francisco. If you won’t be there or want to see the API in action yourself, download the Rdio Music Quiz from the iPhone App store.

While our Mobile API doesn’t yet support our affiliate program, it will soon. So make sure to sign up for it now and start building that incredible mobile app you always wanted to make.

The current API and service terms won’t let developers create paid apps that directly plug into Rdio. Still, with Spotify struggling to launch in the US and an impressive userbase and app selection after a few months, Rdio has the chance to maintain a healthy ecosystem for music streaming apps in the US, and take it from there to Europe. Rdio has big plans for sure, and it’ll be interesting to follow its developments in the next months, especially after Apple will unveil its rumored cloud music service with full labels’ support.