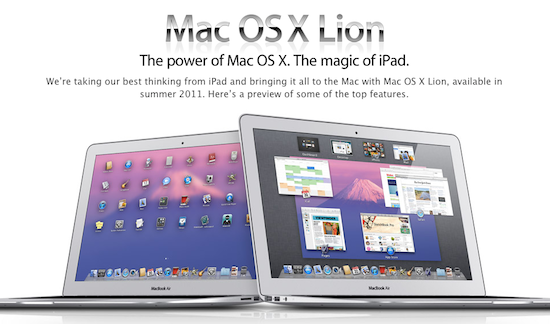 According to a report from TUAW, Mac OS X Lion has gone “live for internal testing” at Apple last week. Whilst it’s not clear what that means, we assume Apple has begun widespread internal testing of a new build of the OS that’s nearing GM status. TUAW suggests Lion might see a public release at WWDC in two weeks, or at least sooner than previously expected considering many had pointed at Lion on track for a late July / August release:

This suggests the new OS might possibly ship as early as WWDC with an “available today” mention at the keynote – or it might not. But Lion is looking to be one step closer to availability for Apple customers.

The latest developer preview of OS X Lion brought minor graphical changes to apps Apple had already updated in previous DP builds, as well as tweaks and performance improvements to make the OS more stable and faster. Developer builds of Lion have been seeded through the Mac App Store with a redeem code system, though Apple is also believed to make the OS available on DVDs or portable USB keys for users with slow Internet connections, unable of downloading GBs of data from the Mac App Store.