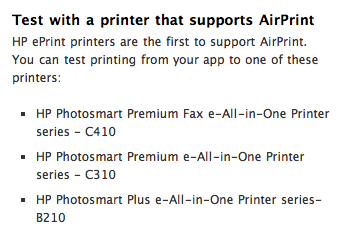 Just like we previously reported, it looks like Apple removed AirPrint support from 10.6.5. Available to developers in previous beta versions, the feature allowed iPad, iPhone and iPod Touch users on iOS 4.2 to print documents to printers shared via Mac OS X or Windows.

It turns out AirPrint now only works with supported HP printers, as noted by Macworld and Ars Technica. We’re also getting reports from readers who have already installed 10.6.5 (which came out a few minutes ago) confirming that, indeed, AirPrint to shared printers from iOS 4.2 GM isn’t working.

Many claim Apple may release an AirPrint specific update in the next days or even change the GM build to make shared printing work with the latest version of OS X – but we find it unlikely. Mac OS X 10.6.5 used to have built-in Airprint functionality and now it’s gone; there’s no mention of AirPrint in the 10.6.5 changelog.

We’ll check again on Friday, when iOS 4.2 is rumored to come out, but if this is true, then AirPrint just became a lot less useful.