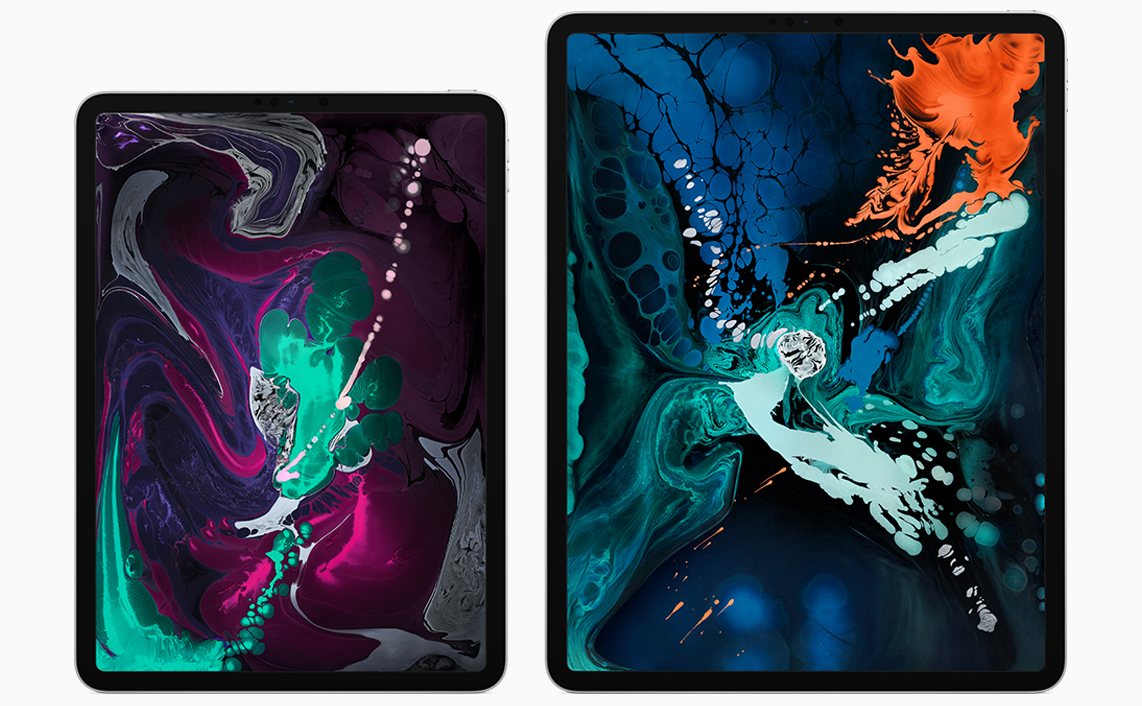 The initial reviews of Apple’s new iPad Pros are out. There is a general consensus that the hardware is impressive, but many reviewers conclude that limitations of iOS are holding the device back. Here are highlights from some of the reviews:

Laptop Magazine sums up what many reviewers discovered about the iPad Pro’s hardware:

The iPad Pro is the quintessential tablet for power users and creative pros. It’s so fast that I imagine the likes of Qualcomm and Intel are getting nervous. This tablet wiped the floor with premium Windows laptops and 2-in-1s, in both benchmarks and real-world tests. The iPad Pro’s display, sound and battery life are also top-notch, and the improved Apple Pencil is more comfortable and easier to store.

“No one buys an iPad because of CPU benchmarks”, I wrote last year. I don’t think that’s true any more. I think there are people who will and should buy the new iPad Pro because of its performance. At the hands-on area after last week’s event, Apple was showing Adobe Lightroom editing 50 megapixel RAW images from a Hasselblad camera. The photos were by Austin Mann, who was there, and helpfully demoed the software, showing what a real pro photographer would do in real life with real images. The experience was completely fluid and instantaneous.

The new iPad Pro is the first iOS device to adopt USB-C, but notably, it does not work with external storage devices. The Verge’s Nilay Patel:

…one extremely important category of devices will definitely not work: iOS does not support external storage. You can plug as many flash drives or hard drives as you want into the iPad Pro’s USB-C port, and nothing will happen. Apple says third parties can write apps to talk to external storage, but out of the box, this $1899 tablet simply won’t talk to a flash drive.

The ability of third parties to write apps that allow USB storage to save to the Files app is not new, and it’s a far cry from the convenience that system-level support could provide.

Despite the lack of storage support, Patel found that a variety of other devices worked:

Keyboards worked. A USB microphone showed up in Garageband. You can plug a phone or Nintendo Switch into it and get up to 7.5 watts of power to charge them. (That’s not really enough for a Switch, by the way.) Apple supports both analog and digital audio out, so virtually all USB-C headphones and audio dongles work, a huge improvement over the Android ecosystem.

However, as Chris Velazco of Engadget points out:

That’s the thing about using this connector sometimes, though: You’ll never really know what to expect until you plug something into it. Aside from briefly outlining a few use cases for USB-C during its launch event last month, Apple hasn’t really explained how else people can expect to use it, making my time with the Pro one long trial-and-error session. I’ve been pleasantly surprised with how I’ve been able to put that new connector to use, but I’m starting to get tired of this guessing game.

Due to the thinness of the new iPad Pros, Apple has moved from a 6 lens rear-facing camera system to a 5 lens one. The camera, which protrudes from the rear of the device, also loses optical image stabilization.

The camera in the iPad Pro is a completely new thing. It uses a new sensor and a new 5 element lens. This new camera had to be built from the ground up because the iPad Pro is too thin to have used the camera from the iPhone XR or XS or even the previous iPads.

Interestingly, this new camera system does not deliver portrait mode from the rear camera, like the iPhone XR. It only gives you portrait from the True Depth camera on front.

The significant camera bump on the back houses an f/1.8 lens and a 12-megapixel sensor — Apple says this is an all-new camera that matches the performance of the old iPad Pro in a much thinner package so it can fit behind the display. You do get the benefit of Apple’s Smart HDR processing, so you’ll see flatter images with more detail in the shadows than before, but the images are not quite as good as the iPhone XS wide-angle camera.

The new Apple Pencil is one of the best “2.0” products I’ve ever seen. The original Apple Pencil is a terrific product, but the new one nears perfection for the concept.

Panzarino has this interesting detail about the Pencil’s inductive charging:

The ‘top’ (for lack of a better term) edge of the iPad Pro in horizontal mode now features a small opaque window. Behind that window are the charging coils for the Pencil. Inside the Pencil itself is a complimentary coil, flanked by two arrays of ferrite magnets. These mate with magnetic Halbach arrays inside the chassis of the iPad. Through the use of shaped magnetic fields, Apple pulls a bit of alignment trickery here, forcing the pencil to snap precisely to the point where the charging coils are aligned perfectly. This enables you to slap the pencil on top quickly, not even thinking about alignment.

Another interesting tidbit from John Gruber:

As a nice touch, when you first connect the Pencil to your iPad, iOS shows you a Pencil on screen and it’s the _exact_ size of the actual Pencil. It’s adorable.

An upcoming version of Procreate sounds as though it makes good use of the new Apple Pencil, combining the double-tap gesture with contextual awareness. Panzarino:

In Procreate, for instance, you can choose a different double tap action for many different tools and needs. It’s malleable, depending on the situation. It’s linked to the context of what you’re working on, or it’s not, depending on your (and the developer’s) choices.

One minute you’re popping a radial menu that lets you manipulate whole layers, another you’re drawing and swapping to an eraser, and it still feels pretty easy to follow because it’s grounded in the kind of tool that you’re using at the moment.

If you were wondering whether the new Smart Keyboard folio case is more stable than the previous model, Panzarino says it is:

The general effect here is that the Smart Keyboard is much much more stable than previous generations and, I’m happy to report, is approved for lap use. It’s still not going to be quite as stable as a laptop, but you can absolutely slap this on your knees on a train or plane and get work done. That was pretty much impossible with its floppier predecessor.

Four hours of non-stop screen-on, GPS pinging, data transmitting, and graphics rendering later, and the 10.5-inch was down to 37% while the 12.9-inch was still at 54%. (Simulator activity rendered my iPhone XS, XR, and Max down to the teens a couple weeks ago.)

Working on the iPad Pro

In terms of day-to-day work, some reviewers found that accomplishing particular tasks on an iPad Pro was more difficult than on a Mac:

For me, the whole experience and new ease of charging now makes the Pencil more likely for me to use, instead of ignore. It feels like a part of the iPad, now.

Editing, though? That’s another story. I use a trackpad to edit. Apple allows a virtual trackpad in iOS 12 using the onscreen software keyboard, but there isn’t an option for the physical keyboard.

While iOS 12 has a few keyboard shortcuts that help zip between apps, what I was missing was a degree of information density. Everyone has a different way of working, but sometimes on a Mac I’ll have five windows open at once, passively monitoring messages, email, Slack, Twitter and music. On the iPad, I had to keep flipping through apps in an attempt to stay tuned in. Some iPad apps don’t even show you the time and battery level along the top edge.

Although reviewers were impressed with the new iPad Pro’s hardware, many were frustrated by iOS. Patel concludes that:

Apple’s approach to iOS is holding that hardware back in serious and meaningful ways, and while USB-C makes life with this new iPad Pro slightly easier, it still has the same basic capabilities and limitations of last year’s iPad Pro.

Cnet’s Stein has a similar take:

But the iPad Pro just isn’t flexible enough, yet. The browser is not the same as a desktop-level experience, which can make it hard to work with web tools. No trackpad on the optional keyboard and no support for mice makes text editing cumbersome. Furthermore, iOS hasn’t changed enough. It’s way too much like an evolution of the iPhone, instead of a fully evolved computer desktop. And the current crop of available apps don’t yet exploit this awesome new hardware.

Although opinions differ on whether the iPad Pro can replace a Mac, it’s clear that the hardware has advanced to the point where it exceeds many of the laptops in Apple’s line. As Federico and I discuss on today’s episode of AppStories, the next year and iOS 13, in particular, will be critically important in justifying the ‘pro’ in the ‘iPad Pro.’ In the coming weeks, we’ll have in-depth coverage of the new iPad Pro on MacStories, so stay tuned.