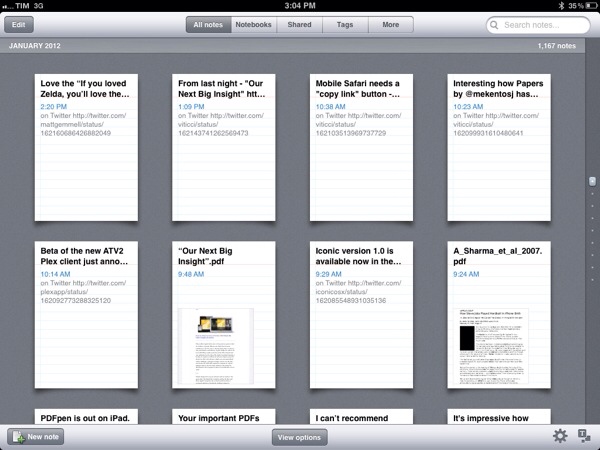 During the past year, note taking/memory management service Evernote set out to build a platform around its services, which span the web, iOS devices, OS X and Windows through a set of cross-platform tools and native applications. The company launched Trunk, a unified showcase of third-party applications that integrate with the Evernote API, and updated its iOS and Mac offerings with richer user interfaces and new functionalities. Furthermore, Evernote acquired image annotating service Skitch and released an iPad version of it; they also launched four standalone Evernote-based apps: Food and Hello, for remembering meals and people, respectively; Clearly, to read web articles in an elegant format; Peek, to help students learn more through Evernote’s visual presentation.

Whilst it sounds fairly obvious for Evernote to be considering new platforms and opportunities to expand upon the concept of preserving human memory – a subject that offers itself to a broad range of implementations – Alexia Tsotsis over at TechCrunch shares some juicy details behind Evernote’s various acquisitions that led to the dedicated Evernote apps we see today.

As it turns out, Evernote CEO Phil Libin has confirmed the company purchased four startups in the past year alone: among those, Readable became Evernote Clearly, Notable Meals became Evernote Food and an another one, called Minds Momentum, was acquired in order to get the assets for an upcoming Evernote todo list application. TechCrunch doesn’t share any more details, however a quick Google search confirms that Minds Momentum was the company behind Egretlist, an iPhone app to manage todos based off Evernote that we reviewed here.

Basically, Egretlist provided an effortless way to create todos and format them in a native interface that would, however, sync back to Evernote’s main client to make those todos readable, and possibly editable as well, from your desktop computers. Interestingly, Minds Momentum also developed another paid Evernote-based app, Egretlinks, which ran universally on the iPhone and iPad and allowed users to manage web clippings from their Evernote notebooks. Both Egretlist and Egretlinks haven’t been updated in months, the developers’ Twitter account is silent, and the website is still showing iPhone 3GS screenshots for the apps.

Evernote isn’t new to this kind of acquisitions. iOS text editor Essay, for instance, was bought by Evernote to power their iOS rich text editor and few people knew about it until the developer published a blog post.

From my perspective, it only makes sense for Evernote to look forward to revamping the todo management aspect of the service. Note taking and memory management often overlap with todo creation and completion these days, and Evernote’s built-in checklist/todo support is stripped down to minimal functionality without really offering a compelling way to add tasks and reminders. I’m first to admit I’ve used Evernote to remember things to do more than a couple of times in the past.

Minds Momentum’s acquisition, I believe, also plays well with Evernote’s plan in the long term. Rather than supercharging the main client with hundreds of features, Evernote has taken the ecosystem approach in choosing to offer a centralized service with a main general purpose client and several different standalone apps for more specific purposes. The Evernote app itself isn’t the proverbial Swiss army knife: the whole service is. Honestly, I don’t want the Evernote app to incorporate a text editor and a task management tool and food diaries, and it appears that the company seems to be thinking the same thing – nurturing an ecosystem can be much more profitable and rewarding (both for the company and its users) than feature creep.

I look forward to Evernote’s “upcoming” todo list application, just as I can’t wait to get my hands on a public version of the latest Mac beta (which adds some sweet improvements in the text editing UI) and refreshed iOS clients. Expect more Evernote news soon.