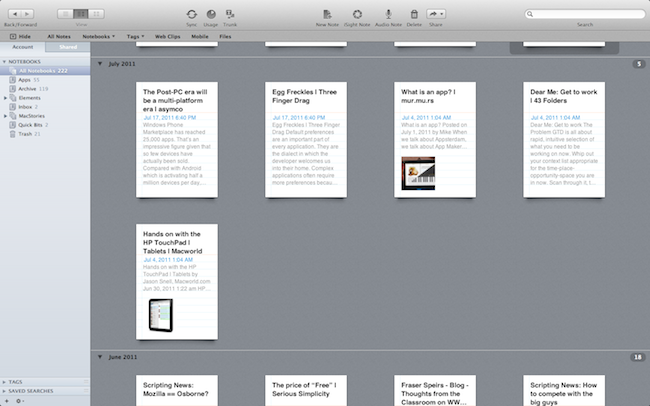 Following the release of a new Evernote app for iOS earlier today that brought a completely redesigned iPad interface, rich text editing and support for viewing shared notebooks, the Evernote team has followed up with the release of Evernote 3.0 for Mac, a major update to the desktop app that aims at enhancing the experience for new OS X Lion users, as well as introducing several fixes and improvements under the hood for both 10.7 and older OS X versions.

Like Evernote 4.1 for iPad, Evernote 3.0 for Mac brings a new design for the “all notes” view, which, however, unlike the tablet version is not really enabled “by default” and requires users an extra click to be accessed. The Evernote developers, in fact, have decided to unify the Mac and iOS experience by bringing the iPad’s interface back to the Mac only in full-screen mode, which is fully supported on Lion. As I previously teased in my MacBook Air review, the new Evernote for Mac doesn’t simply scale up content when entering full-screen mode (which can be activated from the upper right corner of the application’s window): rather, Evernote changes the standard List, Snippet or Thumbnail views to a new “full-screen Snippet” one that looks exactly like its iPad counterpart. Bigger snippets offer a broader view of text and images within notes, and they also provide a way to check out a note’s creation date and time. Full-screen mode in Evernote also features the same month headers seen on the iPad, it allows you to close them at any time, and it displays a note counter next to each month.

The “Lion-ification” of Evernote, as the developers like to call it, doesn’t stop at full-screen support. Whilst Lion will allow the developers to easily share the app’s codebase across iOS and OS X (and thus we should expect more elements making the leap from one platform to another), the current 3.0 version adopts a much criticized paradigm of OS X Lion for displaying content – that is, monochromatic icons and buttons. The new Evernote for Mac adds its fair amount of monochrome to notebooks and tags in the sidebar, as well as icons in the top toolbar. Notebooks and shared notebooks will only be differentiated from the glyphs on top of them from now on, but luckily the Sync button in the toolbar still glows blue when it’s rotating and syncing back to Evernote’s server. That’s a welcome change from Apple’s “monochrome all-the-way” policy seen in Lion so far. Still, it’s a minor change, since all the other icons are gray and in line with Apple’s latest desktop standards. Some users will despise the change and others will welcome it as an example of a third-party app fully embracing Apple’s guidelines – we’ll wait to see how this graphical approach will play out in the next months before judging. Perhaps Evernote will go back to a bit of color, but who knows.

As far as Lion goes, there’s more to play with in Evernote 3.0 for Mac. Just like the new Apple Mail, Evernote now has a “Favorites” bar that allows to drop shortcuts in there so that a notebook, tag, note or saved search will be quickly accessible in the future. Whereas Mail lets you drop mailboxes or folders onto the top bar, Evernote supports pretty much everything that can be saved in your account. That means you can save single notes in the Favorites bar, as well as multiple searches, or tags. 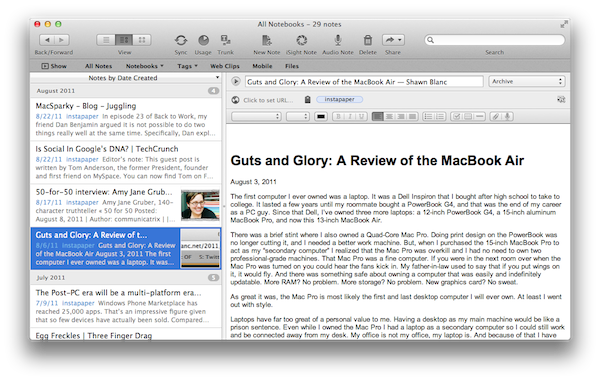 The Favorites bar comes equipped by default with shortcuts to view all your notebooks, tags, notes created on mobile devices, web clips or notes that contain files (these last three are smart filters set up by the developers, and they’re very useful if you use the iOS app a lot, or capture several web pages a day), but it can be customized or reverted to default settings at any time. When combined to the new Hide/Show button for the sidebar (again, borrowed from Mail.app) the Favorites bar becomes a powerful way to sift through content without wasting too much horizontal screen space.

With the new Evernote for Mac, it’s clear the developers have taken a path that will lead to an exchange of ideas, features and interaction patterns between OS X and iOS as the platform matures to accomodate more data and external tools, such as the recently acquired Skitch for Mac. Evernote 3.0 is available now on the Mac App Store, and should show up soon as an in-app update if you chose to download Evernote from the company’s website.