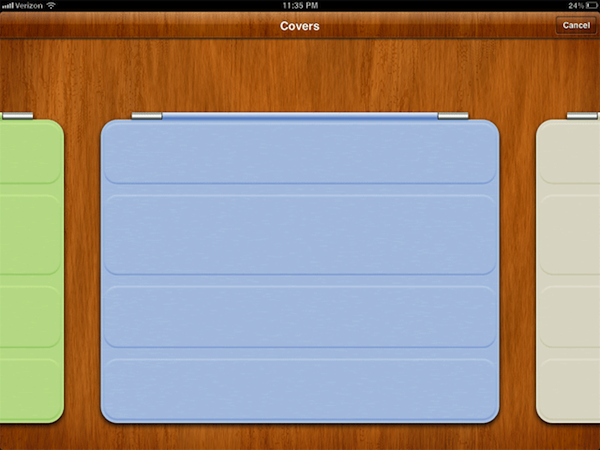 Back in June Evernote, one of our favorite note-taking and data collection tools here at MacStories, released Evernote Peek, a study aid designed specifically around Apple’s Smart Cover for the iPad 2, allowing students to easily exercise on questions and various topics by simply creating notes in their Evernote account, and quickly “peeking” at the app’s interface by lifting the iPad’s Smart Cover to show a question. Evernote Peek is one of the most original experiments built around the Smart Cover, which thanks to the iPad 2’s hardware can quickly unlock the device’s screen and show a portion of the display as you take the cover off. With a mix of design (the app’s interface has been built with the Smart Cover in mind) and Evernote’s online storage for notes and notebooks, Evernote Peek is a great tool not just for students strengthening their memory for an exam, but for anyone who wants to retain specific information in a new way.

The downside, of course, if that the app made sense only on the iPad 2 with a “real” Smart Cover. With a 2.1 update released today, Evernote is introducing “Virtual Smart Covers” for any iPad model, which will allow iPad 1 users or those that don’t use a Smart Cover on their iPad 2 to enjoy the app’s capabilities via software. In Evernote Peek 2.1 you can choose from a variety of virtual covers, and use the app with a Smart Cover displayed on screen, rather than physically attached to the device.

From there, it’s just like using a real Smart Cover. Choose your study materials, close the cover, peek to see the clue, open the cover more to see the answer. Shut the cover and repeat. All this is done by simply swiping the screen. You may need to enable the Virtual Cover in the application settings.

As the Evernote team says, this is a “nice alternative” for those who don’t have an iPad 2 with a Smart Cover. You can get the update for free on the App Store, and check out the app’s promo video after the break.