Apple just confirmed with a press release they have sold over 3 million iPads since the device’s debut on March 16.

The new iPad is a blockbuster with three million sold―the strongest iPad launch yet,” said Philip Schiller, Apple’s senior vice president of Worldwide Marketing. “Customers are loving the incredible new features of iPad, including the stunning Retina display, and we can’t wait to get it into the hands of even more customers around the world this Friday.

To put these numbers in perspective, let’s take a trip down Apple’s iPad memory lane again and remember how iPad sales evolved over time.

And then, of course, the company kept pushing the iPad quarter after quarter with new software, new apps, and a new version in March 2011, achieving these results: 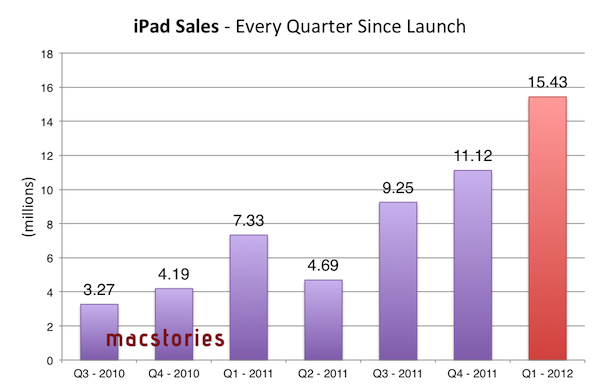 It is worth noting, however, that the original iPad and iPad 2 went on sale exclusively in the United States on Day One, whilst today’s iPad numbers include sales and pre-orders for the United States and 9 more launch countries from March 16, 2012. This Friday (March 23), the device will go on sale in Austria, Belgium, Bulgaria, Czech Republic, Denmark, Finland, Greece, Hungary, Iceland, Ireland, Italy, Liechtenstein, Luxembourg, Macau, Mexico, The Netherlands, New Zealand, Norway, Poland, Portugal, Romania, Slovakia, Slovenia, Spain and Sweden.

For comparison, the new iPad has sold 3 million units in 4 days, while the iPhone 4S sold 4 million units in 3 days last October (the 4S went on sale in 7 countries on October 14, 2011). The iPhone 4S has been the Apple’s biggest success with the iPhone line so far, reporting over 37 million units sold in the last quarter. If these initial are of any indication, it seems like Apple’s strategy with multiple, international rollouts a week from each other may lead to the biggest iPad launch to date.

Earlier today, Apple CEO Tim Cook said the company saw “record” sales for the new iPad in its opening weekend. The new iPad launched to very positive reviews from the press (which mentioned the device’s Retina display, LTE, and battery life as great selling points) and long lines around the world.