Apple just confirmed with a press release they are initiating a dividend and share repurchase program later this year. The company posted a press release yesterday, saying they would make an announcement related to their cash balance today.

Subject to declaration by the Board of Directors, the Company plans to initiate a quarterly dividend of $2.65 per share sometime in the fourth quarter of its fiscal 2012, which begins on July 1, 2012.

Quoted in the press release, Apple CEO Tim Cook said the company has used its cash to make “great investments” with “increased research and development, acquisitions, new retail store openings, strategic prepayments and capital expenditures in our supply chain”. With “plenty of cash to run the business left”, Cook said to expect more of these from Apple in the future. Apple expects to utilize “approximately $45 billion of domestic cash in the first three years” for the programs. 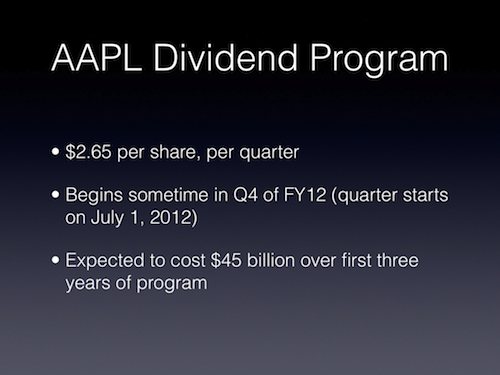 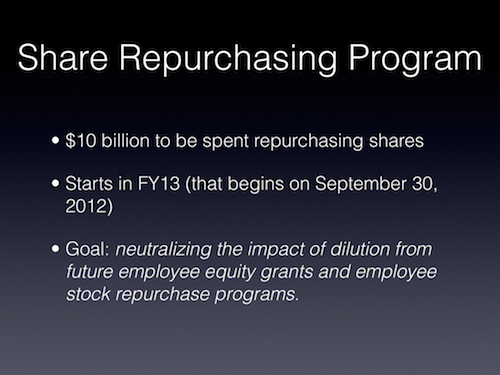 Apple’s last dividend goes back to 1995, according to the company’s official Investor website. In 2010, Steve Jobs said he preferred the company to hold onto its cash, rather than paying a dividend to investors:

We know if we need to acquire something — a piece of the puzzle to make something big and bold — we can write a check for it and not borrow a lot of money and put our whole company at risk,” Jobs said today at Apple’s shareholder meeting. “The cash in the bank gives us tremendous security and flexibility.

The direction, however, has been revised in the past years, with Cook and CFO Oppenheimer stating on multiple occasions Apple was in “active discussions” with the board in regards to its cash balance, now account for nearly $98 billion in cash ($97.6 billion in cash at end of December), cash equivalents, short-term marketable securities, and long term marketable securities.

Apple will provide a live stream of the conference call on its website starting at 9 AM EDT.

Tim Cook: “We are participating in some very large and growing markets and seeing significant opportunities”

“We’re off to an amazing start with iPad”

Gartner estimates that tablet market will be 325 million units by 2015.

Distribution: own stores including 40 this fiscal year.

Cook: “We have thought very deeply and very carefully about our cash balance”

“Innovation is the most important objective at Apple and we will not lose sight of that.”

“We will review our dividen and share purchase plans periodically”

“As Tim said, there’s plenty of cash to run the business”

Dividend expected to be over $2.5 billion per quarter, or more than $10 billion per year, making Apple the highest dividend payer in the US.

Cook: “We love to announce new products, we just don’t do it in conference calls”

Oppenheimer: There’s plenty of US cash to invest in the business, we can’t move cash into US without paying huge taxes – we’ve talked to lawmakers to change that, but no resolution.

Cook: “We had a record [iPad] weekend”

As usual, we have put together a Storify bundle to collect the best tweets about today’s Apple announcement.