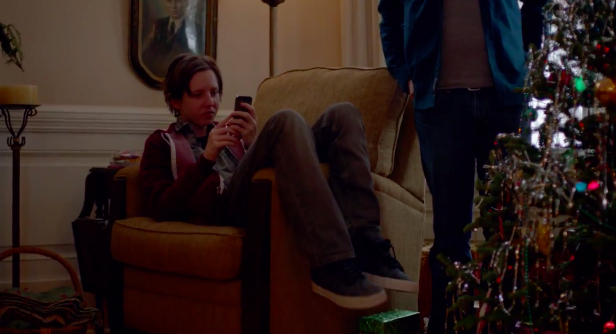 Just in time for the holidays, Apple today aired and published a new iPhone 5s commercial focused on AirPlay and the impact that capturing memories can have on real life scenarios. The commercial, called “Misunderstood”, was first spotted by 9to5mac and subsequently posted by Apple on their official website and YouTube channel.

The commercial is interesting for a variety of reasons. The underlying theme is fairly straightforward: there’s a family gathering for Christmas, with parents, grandparents, kids, and other relatives getting together to celebrate the holiday. It’s snowing and kids are playing outside, running, building a snowman, and taking walks with their parents. Inside, adults are making preparations, cooking, talking by the Christmas tree – perhaps they’re seeing each other after months of work and normal life routine that prevents them from being always together, all the time. It’s a typical Christmas family reunion.

There’s a teenager with a 5s who in the first half of the commercial is shown constantly checking his iPhone: he’s holding the iPhone as he greets his relatives, he’s absorbed in the display and apps while everybody else is seemingly having a good time, and, again, he goes back to his iPhone while others are looking at the festive tree inside the house. At one point, his grandfather throws a hat towards his iPhone’s camera to grab his attention – “Put that thing down and come join us!”, the commercial seems to say. We’ve all seen (or been) this kid in our lives, full of electronic devices.

And then the commercial changes: as the entire family is gathered in the living room, the boy walks in, his iPhone in hand, and turns on an Apple TV connected to the television. He connects the iPhone to the Apple TV wirelessly with AirPlay, and he starts streaming a video. This is where Apple reveals the story behind the ad: the kid wasn’t just isolating himself from his family because he was bored and he needed his apps – he was making a home video for his family. The perspective changes: what, from the outside, looked like a teenager ignoring family members reveals photos and videos taken with the iPhone’s camera and (likely) edited with iMovie. There are touching clips of kids playing, people hugging, laughing, kissing, and just having the good time that everybody wants to have for Christmas – when life routine is far away in the city and you get to wake up late and take a walk with your kid in the snow. Heads turn in the living room – “How did you make this?”, you can almost hear people ask.

The iPhone shown in the first half of the commercial wasn’t being used as an escape device to kill boredom – it’s advertised as a creation device used to create memories, edit videos, and share a touching moment with family members that you don’t see much often anymore. From the iPhone’s camera point of view, now mirrored via AirPlay onto the big screen for others to see, everything makes more sense: seeing relatives and watching them talk, play, and share personal moments. The iPhone was used to record life rather than escape from it. The home video ends, notably, with a selfie; people are happy, the kid is happy. Cut to family house seen from outside. Happy holidays from Apple.

Apple’s new commercial may be deemed as unrealistic by some (an Apple TV at your grandparents’ house? Teens not using Snapchat?), but it’s good. It’s relatable, human, and it highlights the iPhone’s best features (the 5s’ camera, SloMo, powerful video editing, streaming, music) with the personal touch that Apple has been employing in the past years for commercials such as Photos, Music, and FaceTime Every Day. It’s a clever commercial in that it sells a product while telling a story that people know – but from the angle of technology empowering us in new ways.

The inclusion of the Apple TV and AirPlay is interesting. AirPlay, in its various forms, has long been considered one of Apple’s most undervalued features, and the company is trying to position it as an easy to use and useful companion to the main iPhone experience. There are no screens showing how AirPlay is activated or the Apple TV interface, but the message is there: there’s a way to show iPhone videos on the television. It’ll be interesting to see if Apple will follow-up to this in future commercials.

As Christmas approaches, Apple is once again advertising the iPhone as an experience more than a gadget. It’s not about the camera sensor, the faster processor, the apps, or wireless streaming taken individually – it’s about how all these elements, together, make technology (in this case, Apple’s technology) fit into our lives, empowering us.

You can watch the commercial below.