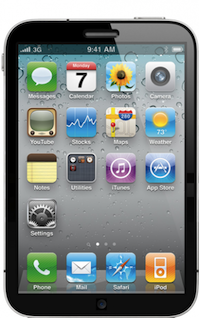 With recent rumors about a smaller, cheaper, streaming-only iPhone, it’s no surprise analysts are weighing in to offer their take on the subject. After the predictions of Apple’s promising 2011, a new iPhone model targeting “the masses” with a lower price point and possibility to run off-contract surely could deeply affect Apple’s market worldwide.

As reported by Forbes, analyst Toni Sacconaghi of Bernstein Research believes the so-called “iPhone nano” (or “iPhone mini”) could expand Apple’s addressable market by six times in terms of units:

Sacconaghi says his analysis suggests a lower price phone could expand Apple’s addressable market by 6x in terms of units and 2.5x in revenue. Based on the expected size of the 2011 market, and assuming the company captured 5% of the expanded market, he calculates that Apple would get an annual profit boost of $4.50 a share.

But we should put Sacconaghi’s analysis in context. In fact, smaller iPhone and consequent cheaper data plans aside, he also imagines a quite strange product he calls the “iPhone touch” which, to us, doesn’t sound really different from the current line of iPod touches:

The iPhone Touch: Sacconaghi has long expected Apple to take this approach, which basically boils down to an iPhone without a data plan. “Like the iPod Touch, this device would be able to handle music, movies, Internet (via WiFi or cellular), and third-party apps,” he writes. “The iPhone Touch would be consistent with Apple’s stated strategy of minimizing hardware form factors in order to facilitate third-party application development.” He figures such a phone could sell for $149 and $199 at retail and require only a voice plan.

I don’t see the difference between this and an iPod touch which, unsurprisingly, is used a VoIP handset by several users, who rely on WiFi hotspots and home internet connections to stay in touch with their friends and family. Not to mention that dozens of reports in the past suggested Apple might as well start building its own cellular network in the US, thus avoiding carriers altogether. But then again, rumors of an iPhone nano have been intensifying lately, so the WiFi-only iPhone option doesn’t sound much credible at this point.

Question remains whether Apple is planning on releasing a smaller iPhone because they believe it’s the next strategic step to take, or just to address the market already target by low-end Android devices. Could September become the month of iPad and iPhone mini announcements? Guess we’ll find out at the WWDC in June, where Apple is expected to unveil the iPhone 5.