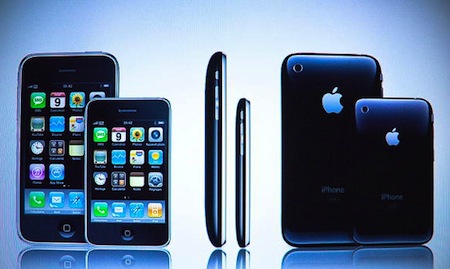 Following last week’s Bloomberg’s report about Apple working on a smaller iPhone with a 2.3” screen and sold off-contract, the Wall Street Journal weighed in earlier today to confirm that Apple has indeed prototyped a phone about “about half the size” of the current iPhone 4. The codename of the new unit should be N97 (not spotted in the iOS SDK yet) and should be cheaper than the “main line” of iPhones.

One of the people, who saw a prototype of a new iPhone several months ago, said the new device is intended to be sold alongside the current line of iPhones and would be about half the size of the iPhone 4. The phone, one of its codenames is N97, would be available to mobile carriers at about half the price of Apple’s main line of iPhones, the person said.

The WSJ also reports among Steve Jobs’ top priorities there is a MobileMe overhaul for 2011, just like the CEO said in an email to a customer a few months ago. The new MobileMe will be free and used as a “locker” for personal media like photos and videos. This would allow Apple to produce iPhones with less storage, and do everything through the cloud, possibly relying on the data center they have been building in North Carolina.

Apple also is exploring a major overhaul of its MobileMe online storage service, the people familiar with the matter said. The service currently requires an annual subscription payment of $99 to $149. Apple is considering making Mobile Me a free service that would serve as a “locker” for personal memorabilia like photos and videos, eliminating the need for consumers’ devices to carry a lot of memory, the people familiar with the situation said.

According to the WSJ, both the smaller iPhone and the new MobileMe are on track for a summer release.

Update: The WSJ is now giving out more details about the new iPhone and MobileMe in their report. The device is “significantly lighter” and has an edge-to-edge screen, which might as well mean the rumors about the lack of a Home button were true. The smaller iPhone should also have voice navigation, although we think that will be a feature of iOS 5 anyway. As for MobileMe, the WSJ mentions streaming of iTunes libraries through the cloud and that Apple was planning a release last year. [via]

The person who saw the prototype of the new iPhone said the device was significantly lighter than the iPhone 4 and had an edge-to-edge screen that could be manipulated by touch, as well as a virtual keyboard and voice-based navigation. The person said Apple, based in Cupertino, Calif., also plans to upgrade the iPhone 4.

The new service would give users access to their iTunes libraries from, say an iPhone or iPad, instead of requiring that the devices be synced by cable with a computer and use space to store the actual files, the people said. The new service likely would be compatible with the iPhone 4, one of the people said.