Yesterday Apple launched new iMacs, a new Mac Pro, a new Cinema Display and…a Battery Charger. Yes, it was a great day. And yes, many “pro” users still don’t know whether they should out their works in the hands of a Mac Pro beast or just go with an iMac by choosing the highest configuration. I mean, those are powerful machines, right?

Let Marco Arment tell you what you should do. 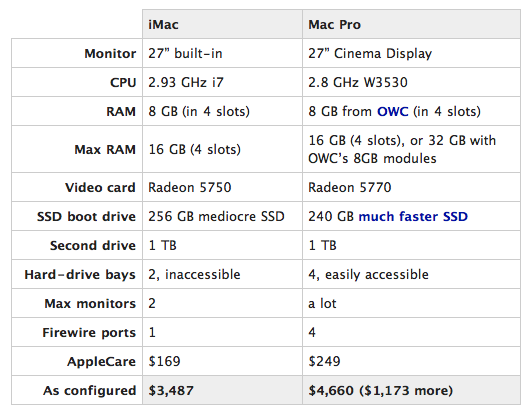 “I made some assumptions, like that you’d be willing to buy third-party disks and RAM, and that you’d be comfortable upgrading both in a Mac Pro (where it’s easy and intended), but you wouldn’t be comfortable upgrading the disks in an iMac (because it’s difficult, unintended, and has so much potential to damage the screen or get dust in it that even I refuse to attempt it). I also assumed that you wouldn’t care about the PCI-Express slots or extra optical bay in the Mac Pro, and that you wouldn’t find the dual-socket versions worth their premium, even though they give you twice as many RAM slots.”

At this point, even if it’s got mediocre SSD and only 2 max monitors, the iMac sounds like the computer-to-buy for professionals. Faster CPU, cheap AppleCare, $1200 less than a Mac Pro. But, hear what Marco has to say about actual usage:

“I have a Mac Pro and Tiff has a 24” iMac. Both were purchased in early 2008. We both have high demands: I write a lot of code and process a lot of data and media files, and Tiff heavily edits wedding photo shoots with thousands of huge RAW files.

While the Mac Pro costs a lot more up front, high-performance users also get a lot more value and versatility over its lifespan, which is likely to be much longer and end much more gracefully.”

Read the full post here. I don’t demand these high-performances from a computer, and that’s why I’m going to buy an iMac. But if you have to do some serious hard work with it, I think you should really consider a Mac Pro.