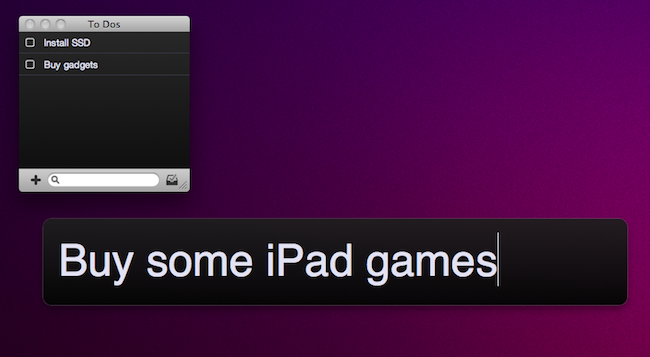 Of all the new apps that are coming out tomorrow in the Mac App Store, Todolicious by Mustacheware is among those we’re most excited about. Created by our friend Steve Streza, who also happens to be the guy behind the great iPhone webapp Swearch.me, Todolicious wants you to stop wasting time organizing your to dos and tasks. Todolicious is a simple app that’s also customizable, and it’s aimed at those people who just want an app to quickly write down the things they need to do. No projects, tags or contexts. Todolicious is a sexy, digital version of the classic sticky notes.

Without giving away all the details just yet (you should be able to play with the app in less than 24 hours), I want to focus on the single most intriguing aspect of the app: the new to do entry field. Instead of displaying a popup window with dozens of options, text fields and buttons, Todolicious provides a simple panel that asks you “What do you need to do?”. It reminds me of Alfred’s straightforward search interface, and you can assign a system-wide shortcut to it so you can enter new to dos no matter what you’re doing with your Mac.

Todolicious will be available tomorrow at $4.99 in the Mac App Store. It’s a simple app we’re really excited about, and we bet that thousands of Mac users who don’t need the functionalities of Things or OmniFocus will give Todolicious a try. Check out the website here, or follow @todolicious for updates.