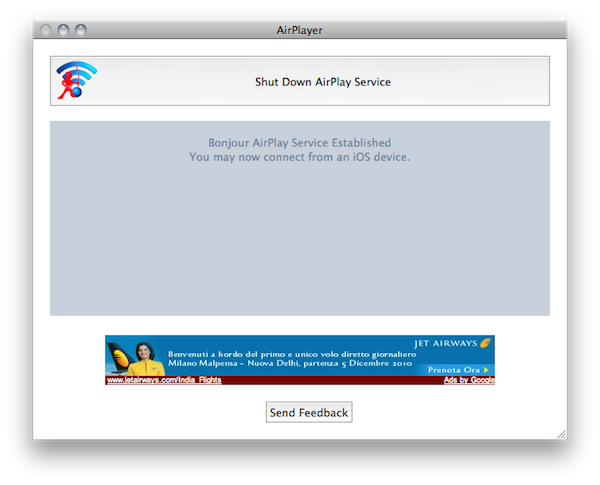 If you’re familiar with AirPlay, you know that it’s a pretty sweet technology that allows you to stream audio and video from any Mac or iOS device to an Apple TV, AirPort Express Station (audio-only) and AirPlay-compatible speakers. That’s the way it works. You can’t stream from Mac to Mac, iOS to iOS, or Mac to iPhone and iPad – although there’s a way to do that via jailbreak.

AirPlay’s streaming is great and almost “magical”, but it has its limitations, possibly due to the fact that Apple introduced it less than a month ago with the release of iOS 4.2. Ever since AirPlay hit the internet with the final public build of 4.2, hackers started working on mods to make it work in any app (video streaming from iOS apps is limited to Apple’s applications), on any device. TUAW’s Erica Sadun, for instance, has been busy working on a solution to make AirPlay work backwards, from iOS to the Mac.

The result is AirPlayer, “a custom Bonjour AirPlay service that pretends to be an Apple TV” that runs on your Mac. It’s a Mac app that can accept  incoming AirPlay video streaming from iOS – very simple.

You can read all the technical details about the app over at TUAW, where Erica explains the process behind the development of AirPlayer and its current capabilities. You don’t need a jailbroken device to enjoy backwards AirPlay video streaming, but if you go ahead and install AirVideoEnabler from Cydia, you’ll be able to stream video from any iOS app to the Mac. I’m testing it right now and it works perfectly – connection from iOS to the Mac takes around 6 seconds on my local network.

AirPlayer is working really well for me, and I haven’t even tried it with the better connection I have at the office – I look forward to seeing how streaming from Youtube to iPhone to Mac can take advantage of that.

Check out a demo video below. AirPlayer alpha is available for free here.