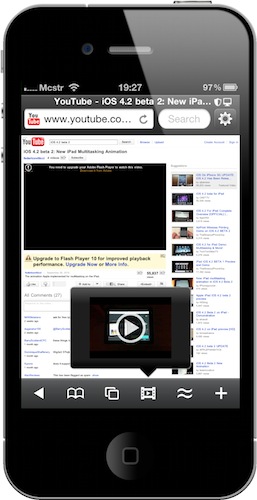 As noted by MobileCrunch, alternative 3rd party iPhone browser Skyfire did great in its first weekend in the App Store. Even though the app wasn’t exactly off to a great start (the developers had to pull the app as they couldn’t keep up with the server demand), it still managed to win the hearts of thousands of iPhone users who apparently needed a browser capable of playing Flash videos:

The company isn’t sharing exact numbers, but they did just tell me that their download numbers for their first weekend on the store were well over 300,000. At $2.99 a pop, that works out to one hell of a bounty. SkyFire isn’t walking away with that whole million, of course; Apple’s going to get their 30% cut, which brings SkyFire’s share down to somewhere between $600-700,000.

Skyfire (our review) enables Flash video playback by translating Flash content to HTML5 on the fly. The app has been success, and the Skyfire team has already announced a native iPad version is on its way. In the video below, you can watch Skyfire’s CEO interviewed on CNN talking about what’s next for their browser, Apple, Adobe and Flash.