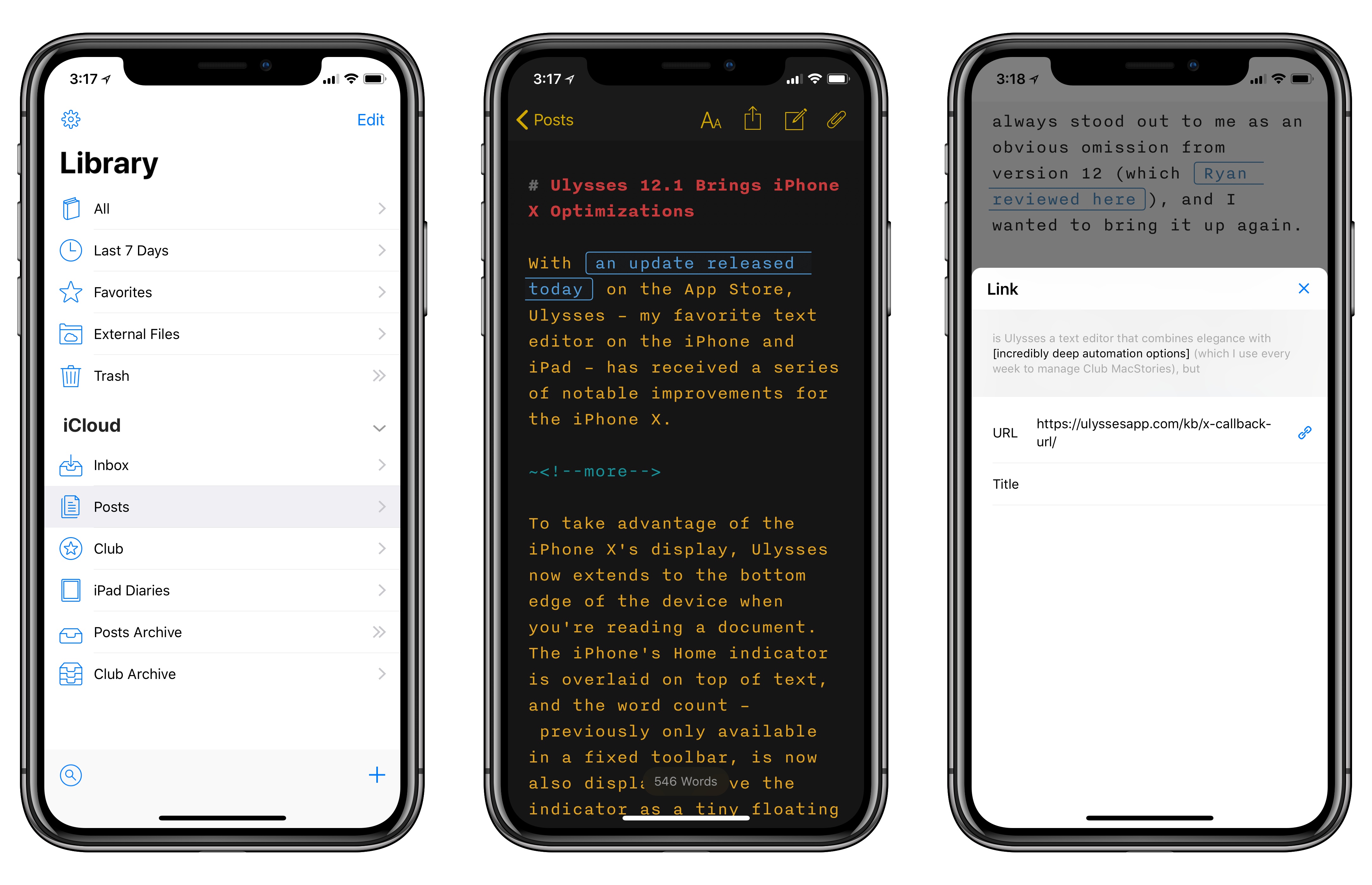 With an update released today on the App Store, Ulysses – my favorite text editor on the iPhone and iPad – has received a series of notable improvements for the iPhone X.

To take advantage of the iPhone X’s display, Ulysses now extends to the bottom edge of the device when you’re reading a document. The iPhone’s Home indicator is overlaid on top of text, and the word count – previously only available in a fixed toolbar, is now also displayed above the indicator as a tiny floating bubble. Visually speaking, it’s very nice – you can even tap the word count to change the type of statistic displayed when you’re editing a sheet.

In addition to refining various toolbars and title bars for the iPhone X’s display, Ulysses 12.1 introduces a new look for element editors – the inline menus that used to appear when you double-tapped a link, a footnote, or an image within a sheet. Now, instead of double-tapping those elements to open an editor, you just need to tap them once, and a card will slide up on screen with contextual controls for different elements. 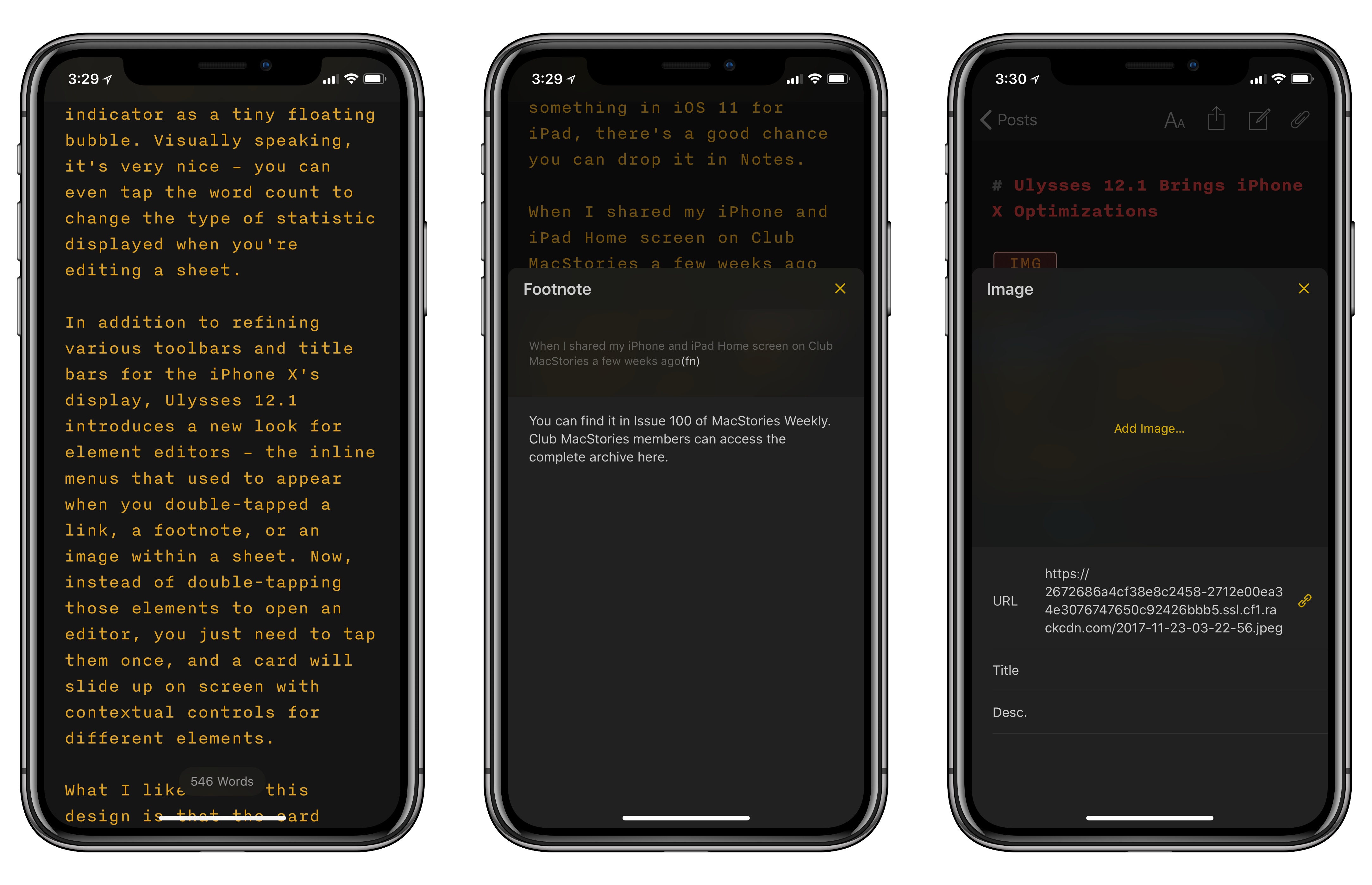 The new word count and element editors in Ulysses 12.1.

What I like about this design is that the card feels like a better visual fit for the iPhone X; it also does a good job at keeping the context of the underlying sheet when you’re editing an individual element. When tapping a link, for instance, you can still see the text surrounding the link at the top of the card. This is a problem that standard Markdown text editors don’t have as every piece of the syntax is displayed inline with plain text, but because Ulysses adopts a simplified approach to Markdown, the developers had to come up with a new behavior for editing elements. I think they succeeded with the new card-style interface.

There are some other improvements in this version – for example, Face ID is now supported for authentication and there’s a new default theme that matches the iOS 11 aesthetic. I need to mention, however, that one of the best additions to Ulysses over the past year – inline image previews – still doesn’t work the way I’d like it to. Ulysses 12.1 still only supports image previews within a sheet for local image attachments, which doesn’t work for writers who, like me, publish their work on the web and tend to store images on servers, referencing them via URLs in a sheet. I understand that previewing external images would require adding downloading and caching logic to sheets, but this limitation has always stood out to me as an obvious omission from version 12 (which Ryan reviewed here), and I wanted to bring it up again.

I continue to be extremely happy with my decision to switch to Ulysses last year. Not only is Ulysses a text editor that combines elegance with incredibly deep automation options (which I use every week to manage Club MacStories), but the Ulysses developers are constantly innovating, rejuvenating the app, and coming up with ideas that only later show up in competing apps. The new element editors are another example of how Ulysses stays ahead of the curve and rethinks Markdown for easier editing on multitouch devices. Ulysses 12.1 is available on the App Store.