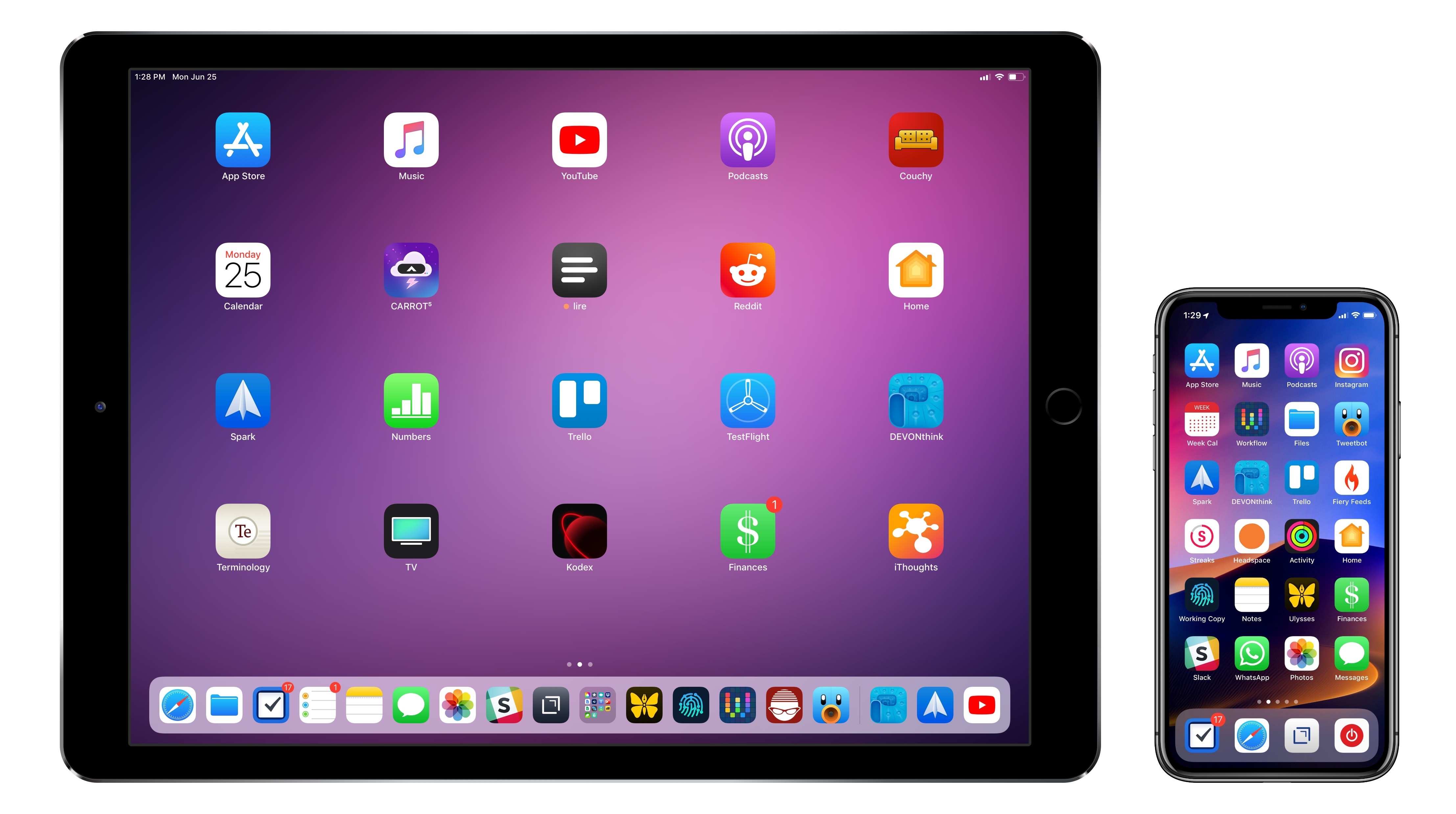 Apple released the first public beta of iOS 12 today, allowing non-developer testers to check out the new features and improvements in the next major version of iOS, set to be released sometime in the fall. While it’s always good practice to avoid installing a beta OS on your primary devices, the public beta seed typically ensures a minimum level of stability and functionality that isn’t always guaranteed with the first developer builds seeded at WWDC. If you’re interested in installing the public beta of iOS 12, you can find more details here.

We covered the big themes of iOS 12 and its most important functionalities in our original overview earlier this month. In this article, I want to focus on something different: showcasing my favorite small features and tidbits that I’ve come across in iOS 12 since installing the beta on both my iPhone X and iPad Pro a few weeks ago. While these features may change (or be removed altogether) between today and iOS 12’s final public release, they should give you an idea of the nice and hidden details you can expect from the latest iOS 12 beta. Let’s take a look.

I want to start with a feature that deserves a proper “finally” for me: the built-in Podcasts app for iOS 12 supports MP3 chapters, allowing you to check out which chapter you’re currently listening to, as well as skip them. Chapters have been popularized by podcast clients such as Overcast, Pocket Casts, and Castro; they’re an effective solution for podcast creators to embed a topical structure within their episodes, thus helping listeners easily rewind to a specific section or jump ahead to a different one. 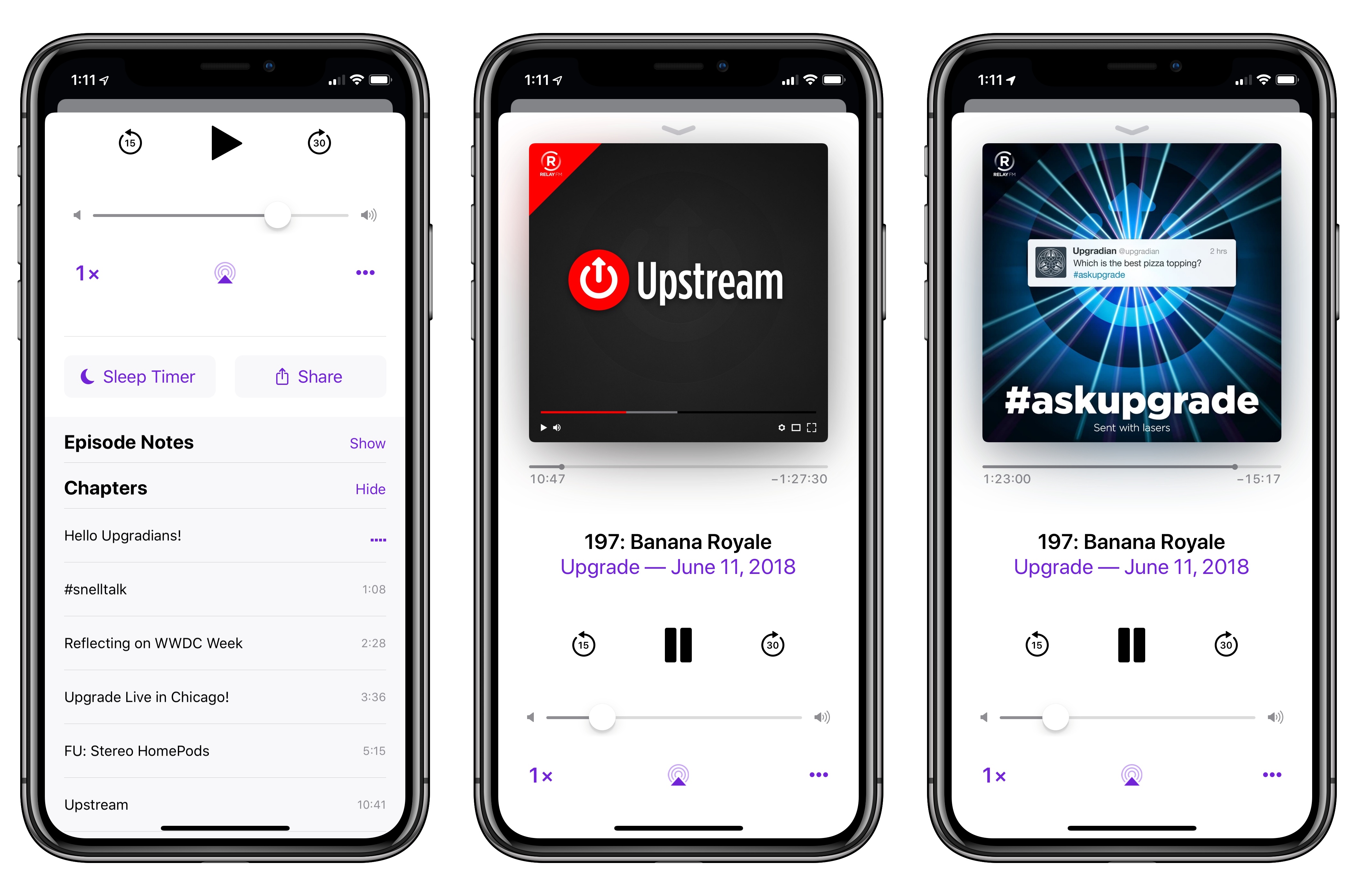 Chapter navigation and custom artwork for the same episode in iOS 12.

In the updated Podcasts app, chapters for the current episode are listed at the bottom of the Now Playing screen underneath episode notes. Chapter titles are timestamped and the app highlights the current chapter with an animated icon on the right side. To navigate between chapters, you can tap on titles in the list; alternatively, whether you’re using AirPods or listening through a device’s speakers, you can ask Siri to “skip to the previous/next chapter”, and the assistant will switch playback position accordingly. In another nice touch, Podcasts supports custom artwork for individual chapters, which you can test in shows such as Upgrade and Cortex on Relay FM.

I’ve been using Apple’s Podcasts app since the HomePod came out because of its native Siri and (later) AirPlay 2 integrations, but I missed the ability to view and skip chapters. I wasn’t expecting Apple to ever support this option, so I’m positively surprised by its presence in iOS 12.

Previously available only on 3D Touch-enabled iPhones or with a two-finger swipe on the iPad’s keyboard, trackpad mode can be activated in a much easier way in iOS 12: just tap & hold on the space bar until the keyboard becomes a trackpad. This mode (seemingly inspired by Gboard and other custom keyboards with a similar implementation) gives owners of iPhones without 3D Touch a way to more precisely control the cursor in text fields. Those who follow Apple rumors claim this feature has been shipped in preparation for a new iPhone without 3D Touch later this year; for now, it’s just a nice way to toggle trackpad mode if you’re using an iPhone 5s, SE, or 6.

As part of the improvements to password AutoFill in iOS 12, the iCloud Keychain password manager (available under Settings ⇾ Passwords & Accounts ⇾ Website & App Passwords) has been refreshed with a cleaner look as well as new security and sharing features.

First, the password list in Settings displays website icons next to each entry in a way that’s reminiscent of the new favicons displayed in Safari tabs in iOS 12 and macOS Mojave, which makes the list prettier and faster to browse. Furthermore, the password manager is now able to surface passwords that have been reused on multiple websites; if it finds a password it thinks should be changed, a button will open Safari View Controller inside the Settings app and it’ll try to redirect you to the right page to change your login information (more details here). In a nice touch, the password manager will show you all the websites that share the same password. These changes work well with iCloud Keychain’s new capabilities, such as suggested usernames when creating a new login on a website and support for saving login credentials when creating a new account in a third-party app (a feature developers will have to explicitly support).

Furthermore, iOS 12 lets you create new logins manually inside Settings and share passwords with nearby contacts using AirDrop. To share a password, tap & hold one, then select the AirDrop button and pick a recipient. There’s more: you can also ask Siri to show you specific passwords, which will start a search inside the password manager within Settings for the domain you requested.

The tapback is perhaps one of the lesser known and underappreciated features of iMessage. First launched in iOS 10, the tapback lets you instantly respond to a message by choosing from a selection of six built-in reactions, ranging from the classic “thumbs up” to “haha”. To send a tapback, you just need to double-tap a message and pick the reaction you like.

The problem with tapbacks is that they could only be used inside the Messages app until iOS 12. Now, however, Apple is bringing tapback support to the most logical place: in iOS 12, you can send tapbacks from notifications simply by expanding an iMessage conversation and double-tapping on a message. 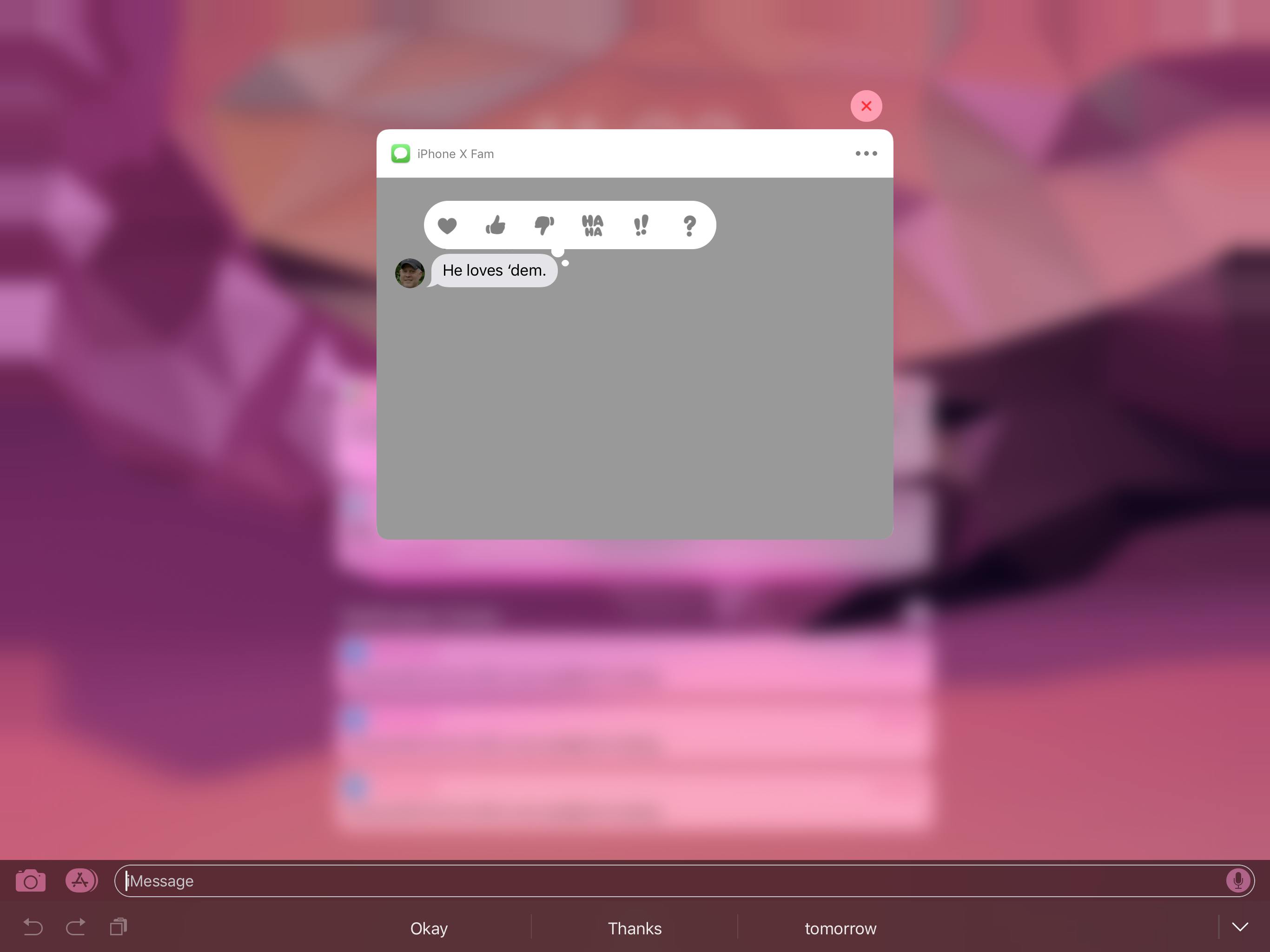 Using tapbacks from the Lock screen in iOS 12.

Whether you’re on the Lock screen, catching up on your Notification Center, or doing something else in another app, iOS 12 lets you send tapbacks any time you’re looking at an iMessage thread. Hopefully, this will increase the usage of the feature, which I find extremely convenient despite the fact that few of my friends are aware of its existence.

If you write longform content on an iPad, or if you want to always make a great impression with your ‘Sent from iPhone’ emails, iOS 12 has just the feature for you: a built-in thesaurus that lives alongside the system dictionary. 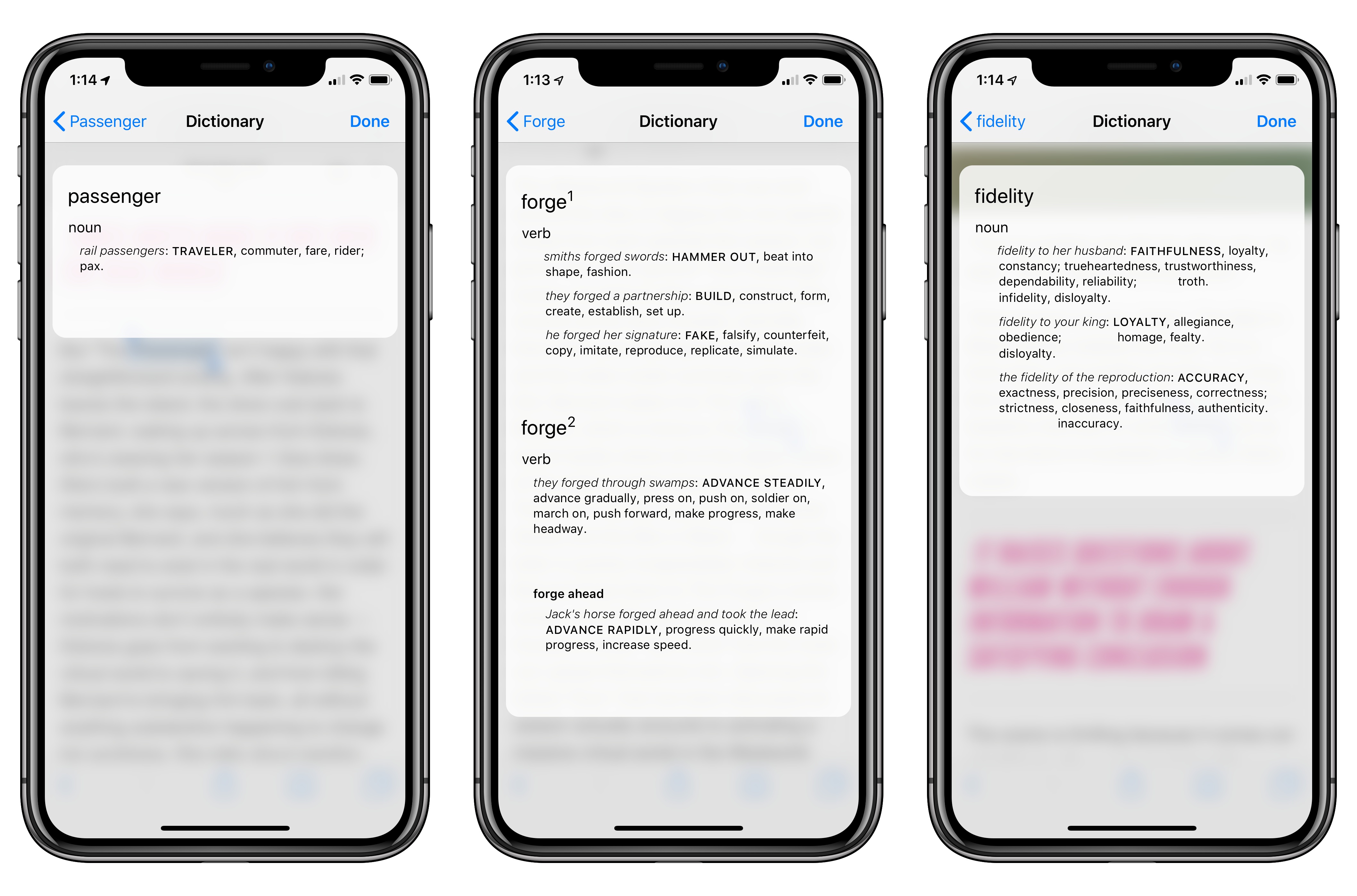 Using the thesaurus in iOS 12.

Long available on the Mac, the Oxford American Writer’s Thesaurus can now be enabled in Settings ⇾ General ⇾ Dictionary; once activated, the thesaurus will provide you with synonyms and alternatives to the currently selected word from the Look Up menu. As someone who always keeps Safari in Slide Over to search for synonyms when writing, I’m very happy about this addition, which I’m going to peruse this summer.

For the past couple of years, iOS has offered a native Markup mode to annotate images and PDF documents. Initially rolled out for Notes and Mail, this feature eventually expanded to QuickLook for document previews as well as screenshots. In iOS 12, Apple is making Markup mode more powerful by adding new drawing options and a color picker with 120 color choices. 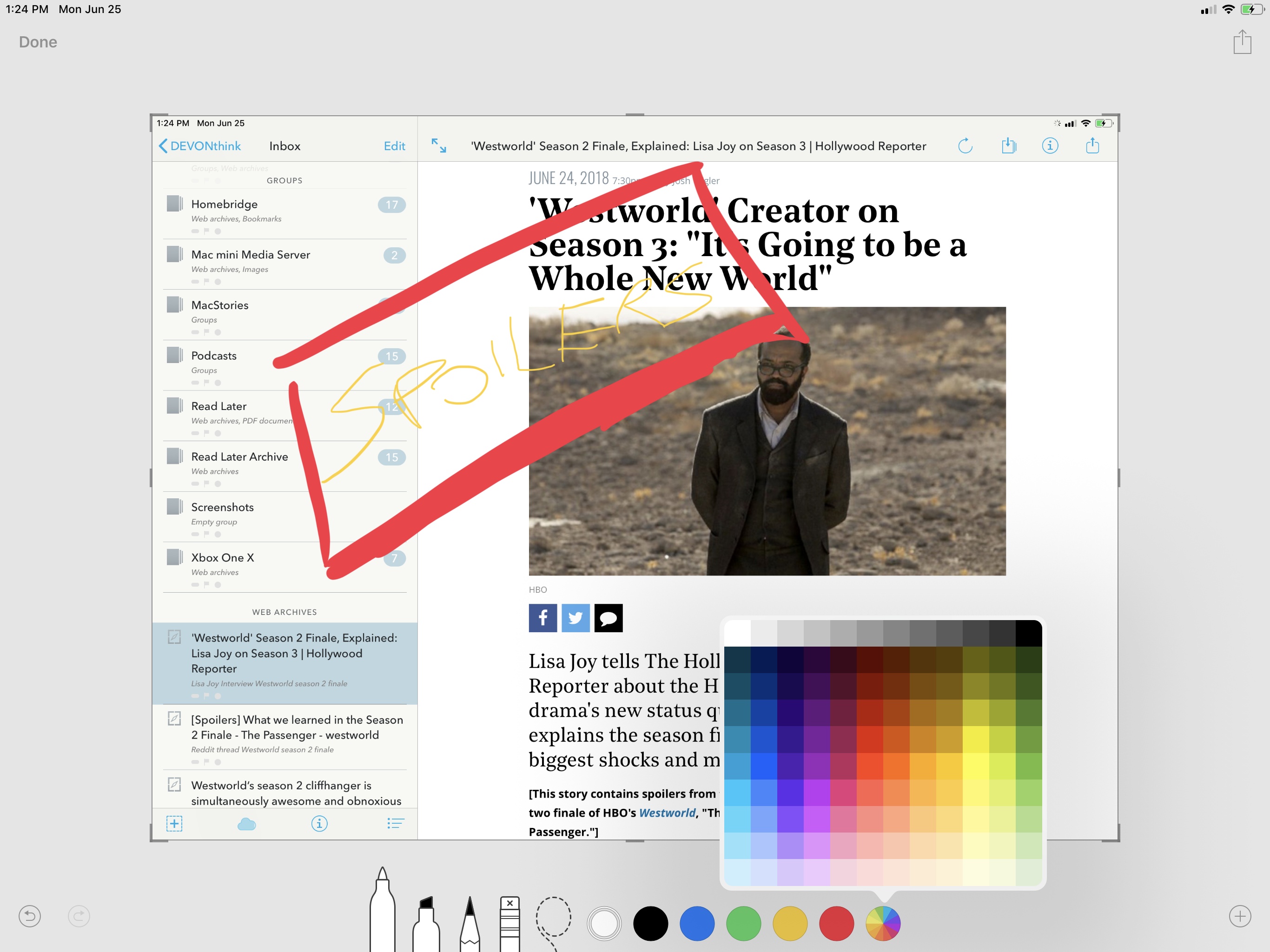 When editing an image in Markup mode, you can now tap on a selected drawing tool (pen, highlighter, or pencil) to open a contextual menu that lets you adjust line thickness and opacity. And while iOS still offers a limited default color palette, you can now choose any other color you want from a picker that features a 12x10 grid of colors in various shades. I’m not sure if these additions will make me stop using Annotable to edit screenshots for my articles yet, but I have a feeling I’m going to rely on iOS’ built-in screenshot editing tools a lot more going forward.

Find My iPhone in Siri

Among the new skills it’s learning this year, Siri in iOS 12 is capable of finding one of your devices nearby and playing a sound on it. To try this feature, ask Siri to “find my iPhone” and the assistant will tell you whether or not it was able to locate it nearby. Additionally, Siri will offer to play a sound on the selected device (if you have multiple devices with a similar name under your iCloud account, you’ll have to select one from a list inside Siri); the sound won’t stop playing until you find and unlock your device. This is no different from what is already supported in the Find My iPhone app, but Siri activation makes it easier and faster to use.

The new For You tab in the Photos app for iOS 12 acts as a unified dashboard for sharing suggestions, Memories, activity from shared albums, and more. One of the new sections of this page is what Apple calls ‘Effect Suggestions’. As the name implies, this functionality (somewhat reminiscent of the Assistant in Google Photos) will scan your photo library and recommend specific effects to apply to individual photos.

In my tests so far, Photos suggested the Studio Light effect for one of my favorite Portrait shots taken with the iPhone X; the effect considerably improved the overall lighting of the picture, and I’m happy with the results. As iOS 12 continues indexing my library, I expect suggestions to include more Portrait Lighting modes as well as Live Photo effects. 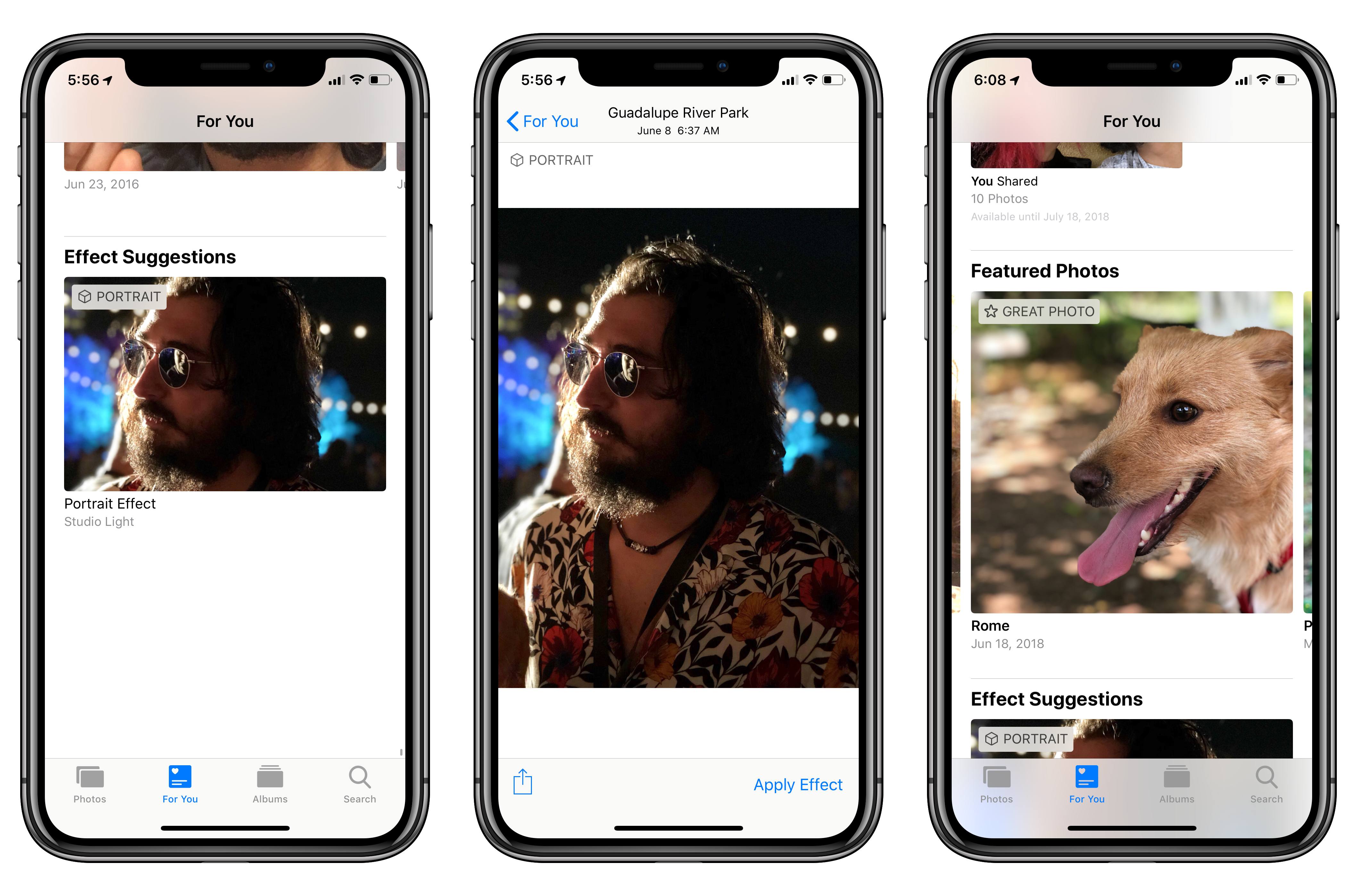 Effects suggestions in the new For You tab of Photos in iOS 12.

Moreover, the For You tab includes a ‘Featured Photos’ carousel with different kinds of highlights. Over the past week, this section showed me suggestions for On This Day, Faces, Recently Edited, Recent Favorites, and even ‘Great Photos’. I have no idea how Photos is able to determine what makes a photo “great”, but I can confirm that it was a pretty awesome portrait of our dog Zelda.

iOS 12 will be released in the fall; as always, I’ll have an in-depth review for MacStories when the final version launches to the public. In the meantime, you can catch up on our iOS 12 news hub here, and expect more coverage this summer as Apple keeps releasing new public betas.