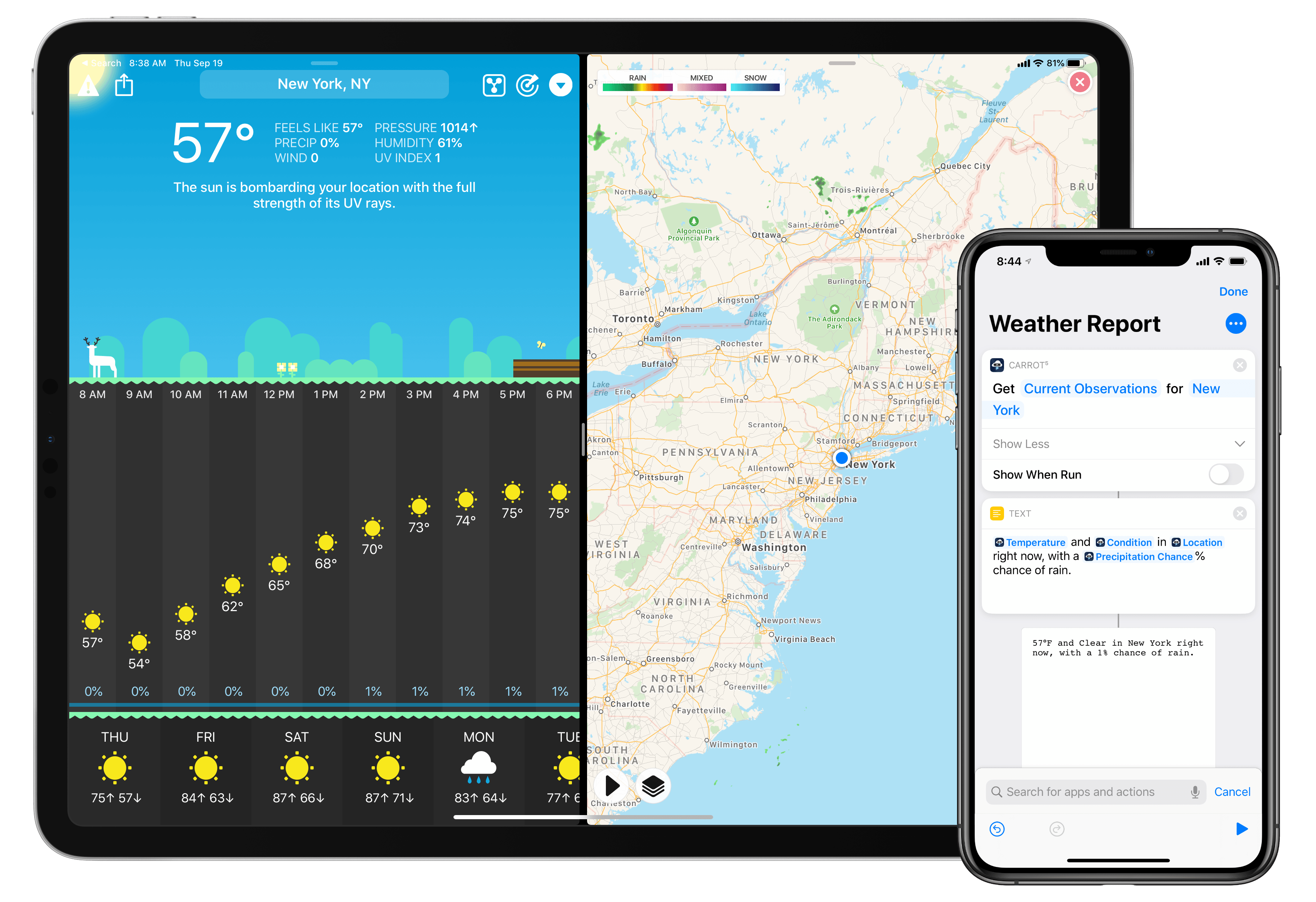 The malevolent weather app CARROT Weather was updated this week to add support for the new capabilities provided by iOS 13 and the forthcoming iPadOS update. This latest version enables more powerful automations in the Shortcuts app, integration with the system dark mode, multiwindow support on iPad, and a fully independent watchOS 6 app. It’s the same CARROT app, but supercharged with all the new possibilities Apple just introduced for its software platforms. 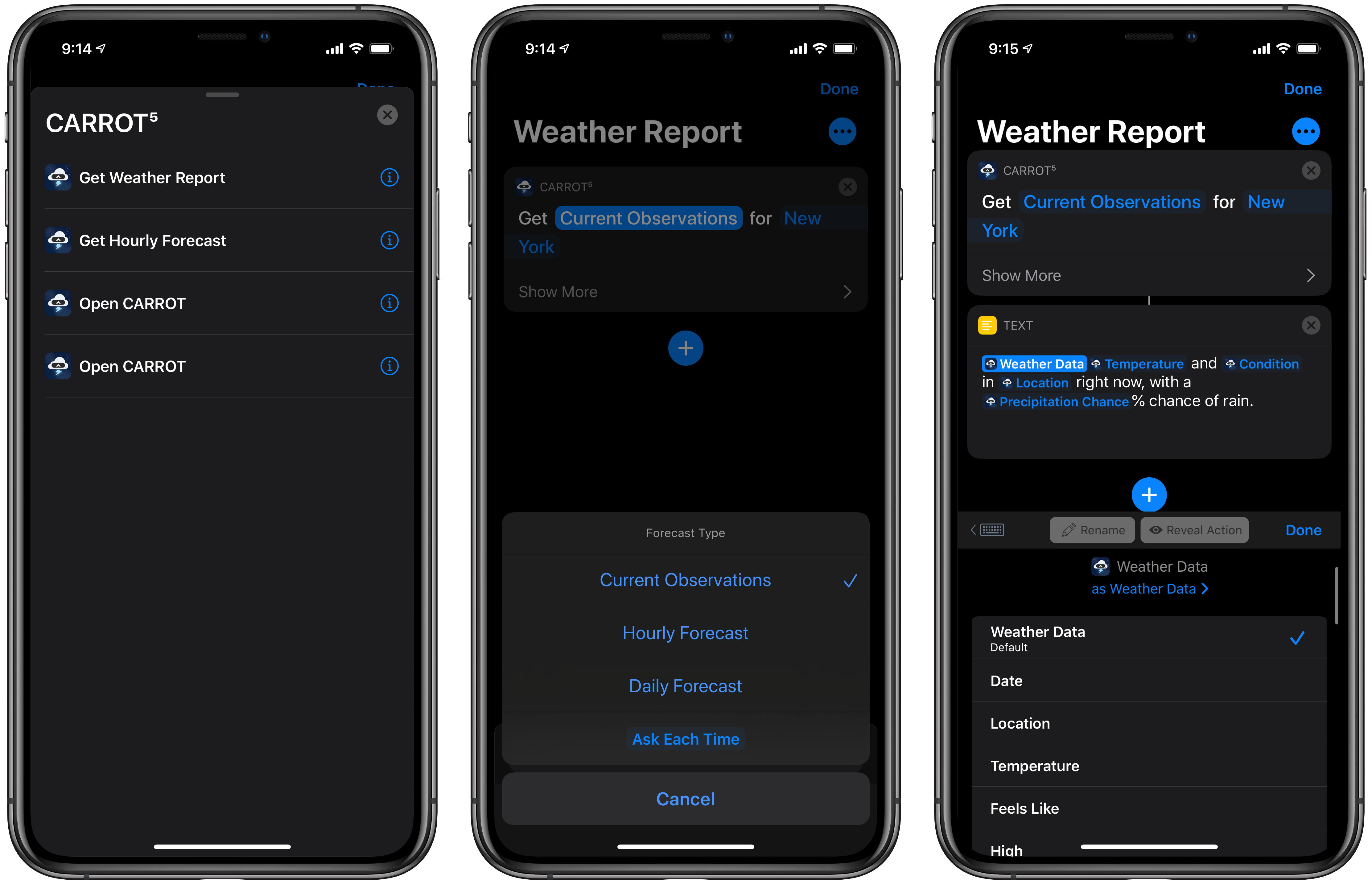 Shortcuts parameters make it easy to build automations that provide all the weather data you could dream of. In the new Shortcuts app in iOS 13, you can extract all kinds of information from a single ‘Get Weather Report’ action.

Because of the way parameters work, by retrieving the ‘Current Observations’ data point accessible in ‘Get Weather Report,’ CARROT enables building shortcuts that use a single magic variable to fetch things like temperature, precipitation chance, wind speed, pollen, sunset time, and much more. When building a shortcut, all you have to do is select the magic variable and configure it with whatever output you prefer. As seen in the images above, you can use that one magic variable to feed multiple data points into, for example, a Text action, causing Siri or the Shortcuts app to read back to you a forecast based on the exact phrasing and structure you set. The possibilities are vast, and setting everything up requires little to no prior experience with automation. 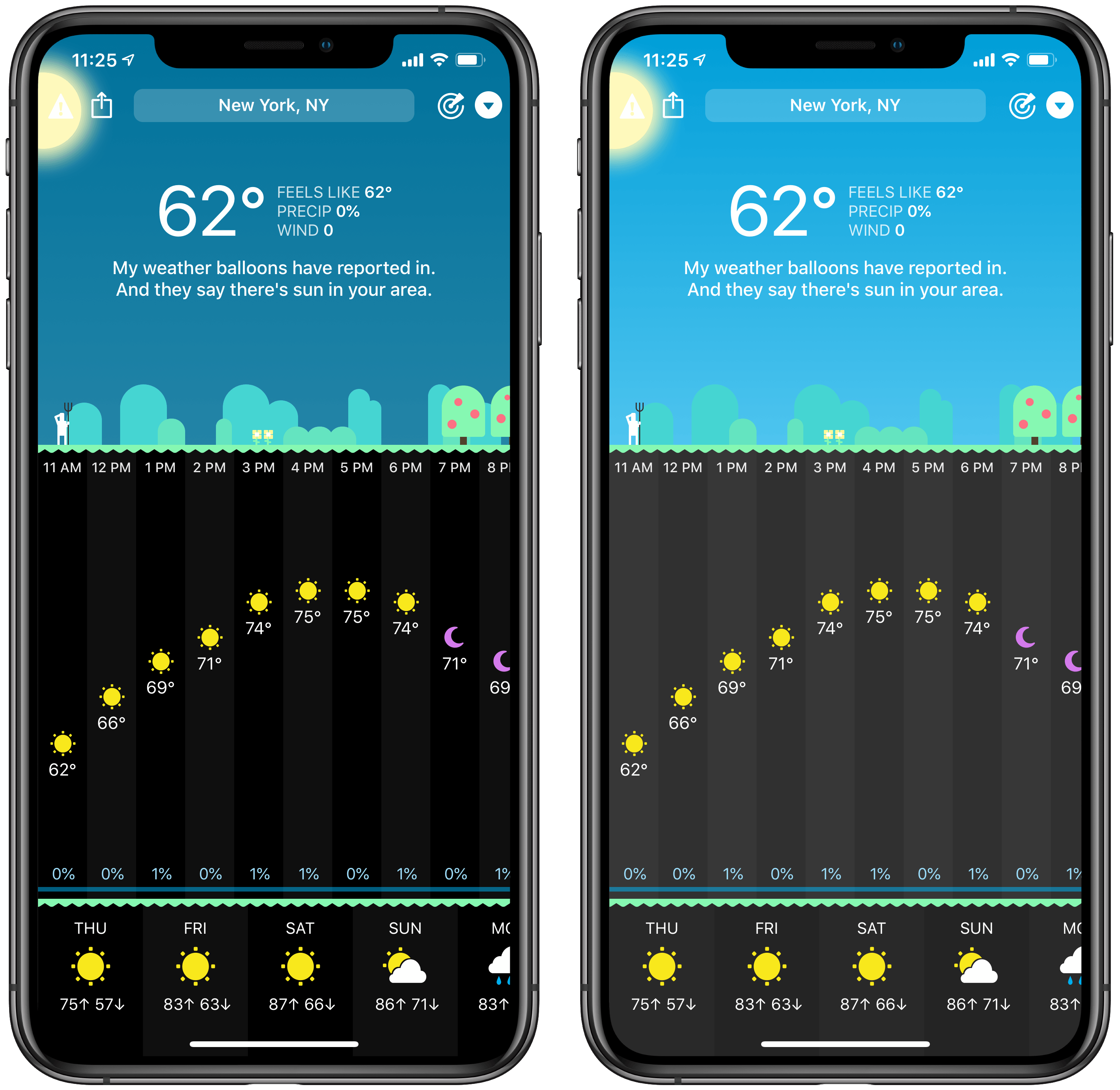 Dark mode in CARROT Weather is now tied to the system appearance setting in iOS 13. While the app previously offered a dark mode option, developer Brian Mueller has given it a fresh coat of paint, modifying lots of elements to make them darker and a better fit for iOS’ system dark appearance. 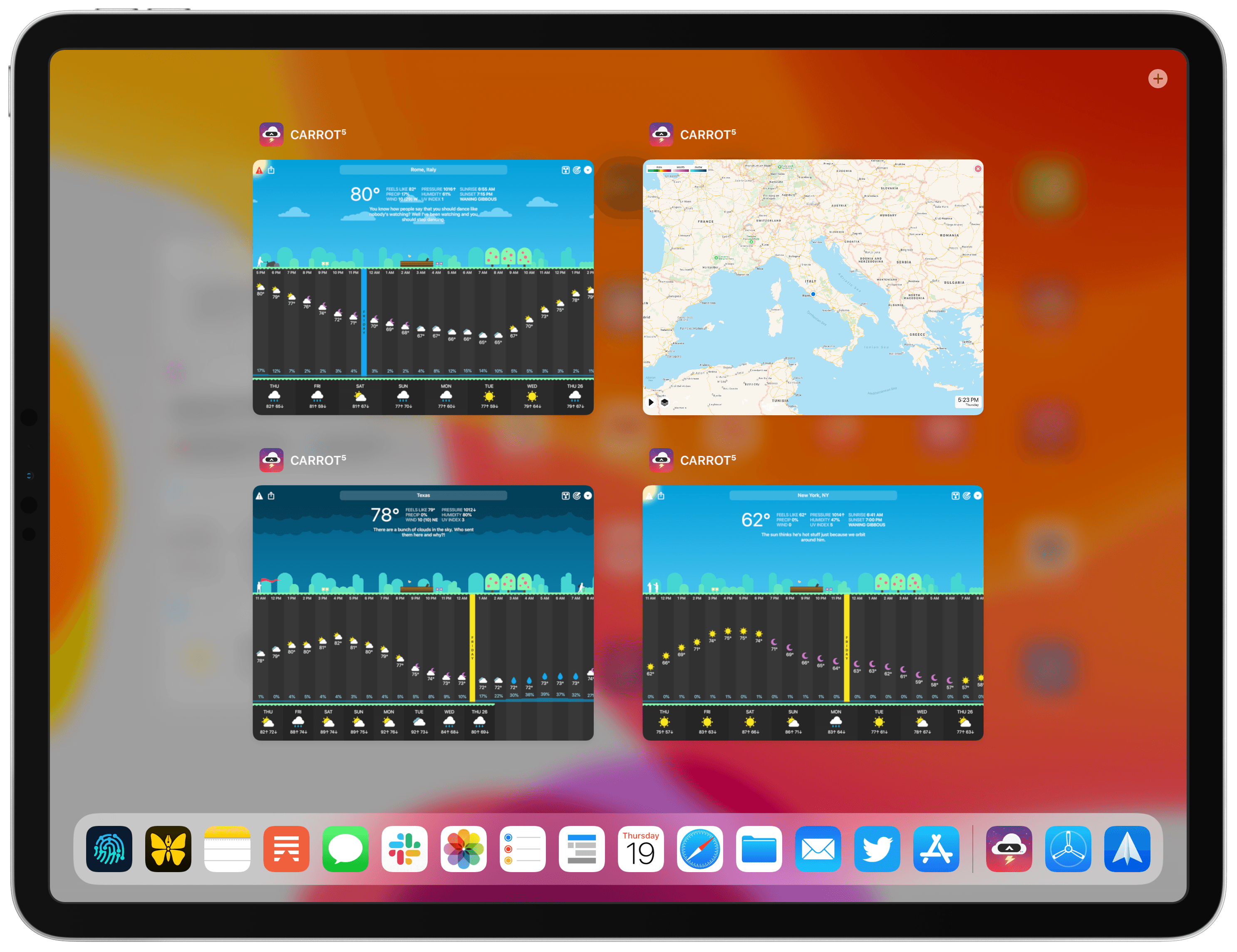 Multiple CARROTs – what have I done?

CARROT Weather isn’t the sort of app I’d have first on my multiwindow wishlist. Text editors, email apps, and task managers are more natural fits for iPadOS’ new capability. However, I love that CARROT Weather has adopted multiwindow support all the same. With it you can spawn multiple instances of the app’s main view via Exposé, where a plus button in the top-right will create a new window. If you need the weather for multiple locations at once, multiwindow now makes that possible, though it’s only ideal for short periods of time because after prolonged inactivity a window will default to surfacing your current location’s forecast.

The bigger advantage of multiwindow is found with weather maps. Open the map view and you’ll see a new button that lets you view the map in a separate window, which will align it alongside the main app in a Split View. Getting to see both views at once is a powerful addition that truly demonstrates the advantage of the iPad’s larger display.

Though multiwindow is included in the current shipping version of CARROT Weather, you can only use the feature when running iPadOS. So if you’re on the iPadOS beta, multiwindow is accessible now, but if not you’ll need to wait until the public iPadOS release on September 24.

CARROT already offered one of the best Apple Watch apps available, so it’s no surprise that the app went independent on day one of watchOS 6’s release. Now in the watchOS 6 App Store you can download CARROT Weather as a standalone app, without needing its iOS companion installed. When you do that, all the available settings you’ll need for configuring the Watch app are available right on your wrist.

This latest CARROT Weather release keeps the app up to date with all the latest OS technologies Apple just made available in iOS 13 and watchOS 6, cementing the app’s strong standing on those platforms. It also, under-the-hood, prepares CARROT for a coming change in the near future: a long-awaited Mac app redesign that’s been teased for release alongside macOS Catalina. For more on that, we’ll have to check back next month.