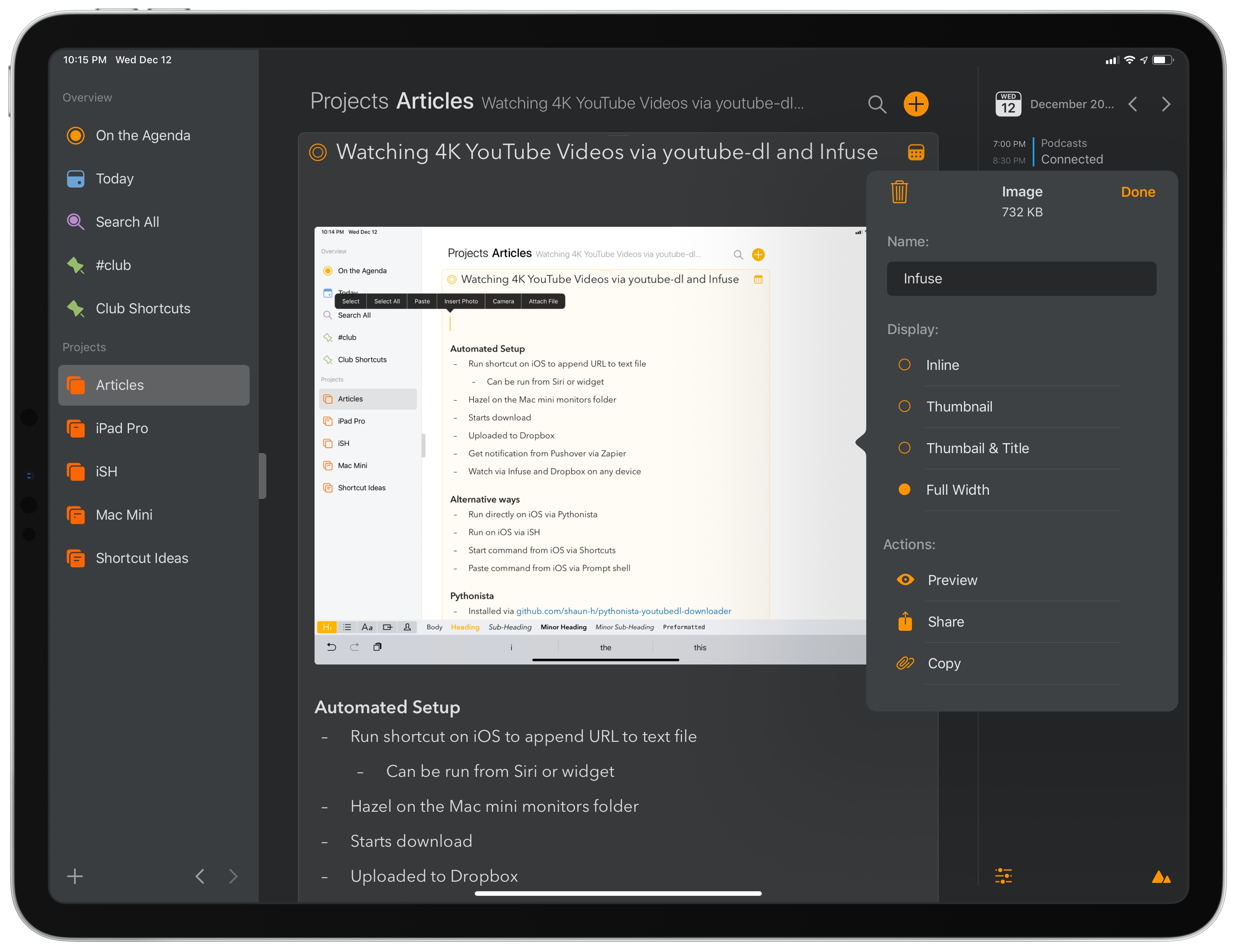 Agenda launched earlier this year with a fresh take on note-taking apps focused on dates and a timeline-based approach. As John noted in his original review of the Mac version (and later iOS), Agenda prioritizes dates as a means of note organization rather than folders or tagging; while it is possible to store notes in folders (called Projects in Agenda) and add hashtags to them, Agenda shines when your notes become actionable, time-sensitive steps that you can access in the top level ‘On the Agenda’ view, the ‘Today’ section, or, even better, the system calendar. Given its unique nature, it takes a while to understand Agenda and evaluate whether or not it may have a place in your workflow; I recommend reading our reviews of the first version of Agenda if you still haven’t tried the app.

As I mentioned on AppStories and Connected recently, I’ve been experimenting with Agenda as a mix of an outlining tool and note-taking app that I use in addition to Apple Notes. Whenever I’m planning an article or long-term project, I always start by saving thoughts or links in the Notes app. I find Notes to be the only app that removes as much friction as possible when saving notes while still maintaining the benefits of a traditional folder structure with instant iCloud sync between devices. The fact that I can throw text, links, and images into Notes makes it a superior choice to Drafts when it comes to quickly assembling a collection of ideas and references.

Once I have enough material to turn an idea into a story, I move everything from Notes to Agenda, where I can start giving notes more structure, tag them (and thus create saved searches), and, more importantly, give them deadlines with due dates. If I’m supposed to start writing an article before the weekend, for instance, I’ll give the associated note in Agenda a due date of Friday; on that day, the note will appear in the Today section of the app and, if I enabled the integration, on my system calendar as well. I’ve also been using Agenda to store notes for my podcasts (I work on them each week and make them due on recording day), ideas for shortcuts I want to build, and other bits of technical documentation that benefit from Agenda’s support for code snippets and sub-headings. But mostly I use the app because its timeline-oriented design lets me see which note I have to turn into an article or podcast outline on any given day without having to create a separate reminder for it.

That’s a long-winded introduction to say that, yes, it took me a while to “get” what Agenda is all about, but now I understand when its system can work for me and when I should stick to Apple Notes instead (such as for personal, non-work notes or notes shared with other people). Which is why I’m happy that with version 4.0, launching today on macOS and iOS, Agenda is getting support for a feature that levels the playing field with Apple Notes: image and file attachments.

The ability to attach images and documents to notes is available for all users of Agenda; however, only owners of the Premium version can display images at full width within a note.

Agenda has the best implementation of adding image and file attachments I’ve seen in a note-taking app for iOS. Attachments can be added either by dragging them into Agenda (on iPad) or picking them from buttons that have been added to the copy & paste menu. These include ‘Insert Photo’ (it’ll open a photo picker), ‘Attach File’ (you’ll see a Files picker), and ‘Camera’, which will open a camera UI inside the app. You can also paste attachments from the clipboard and, in the Mac version of the app, take photos from your iPhone using Mojave’s Continuity Camera. 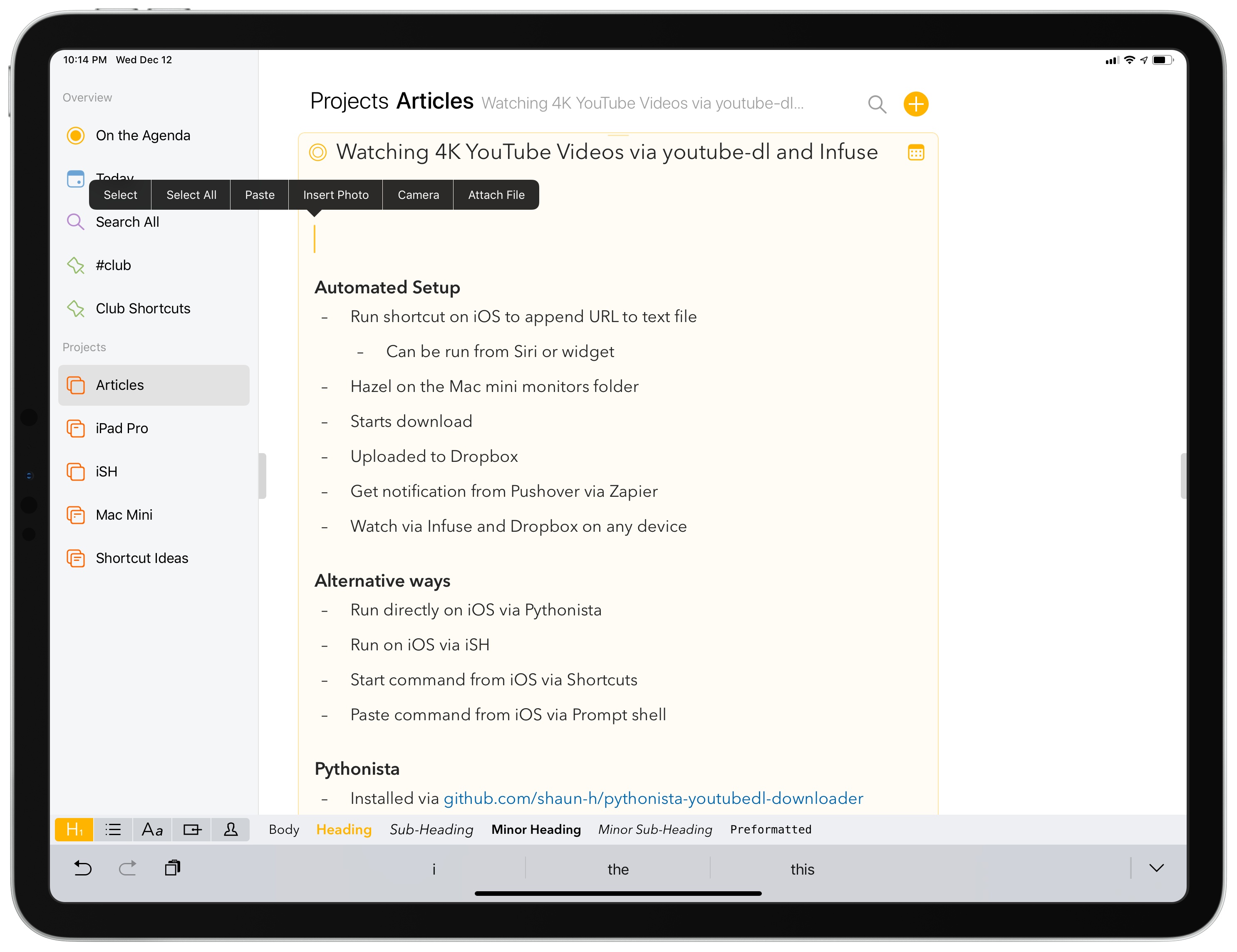 Agenda beats the competition when it comes to tweaking presentation styles and viewing additional details about an attachment too. Image attachments support four different display modes: a thumbnail with or without title, a special inline link that can be tapped to open a preview, and full width; documents (such as PDFs) can be embedded as thumbnails or inline links, but they do not support full width presentation. These options can be accessed by long-tapping an attachment, which will bring up a contextual popup where you can choose the style for the selected attachment as well as buttons to rename, delete, copy, preview, and share the item with extensions. 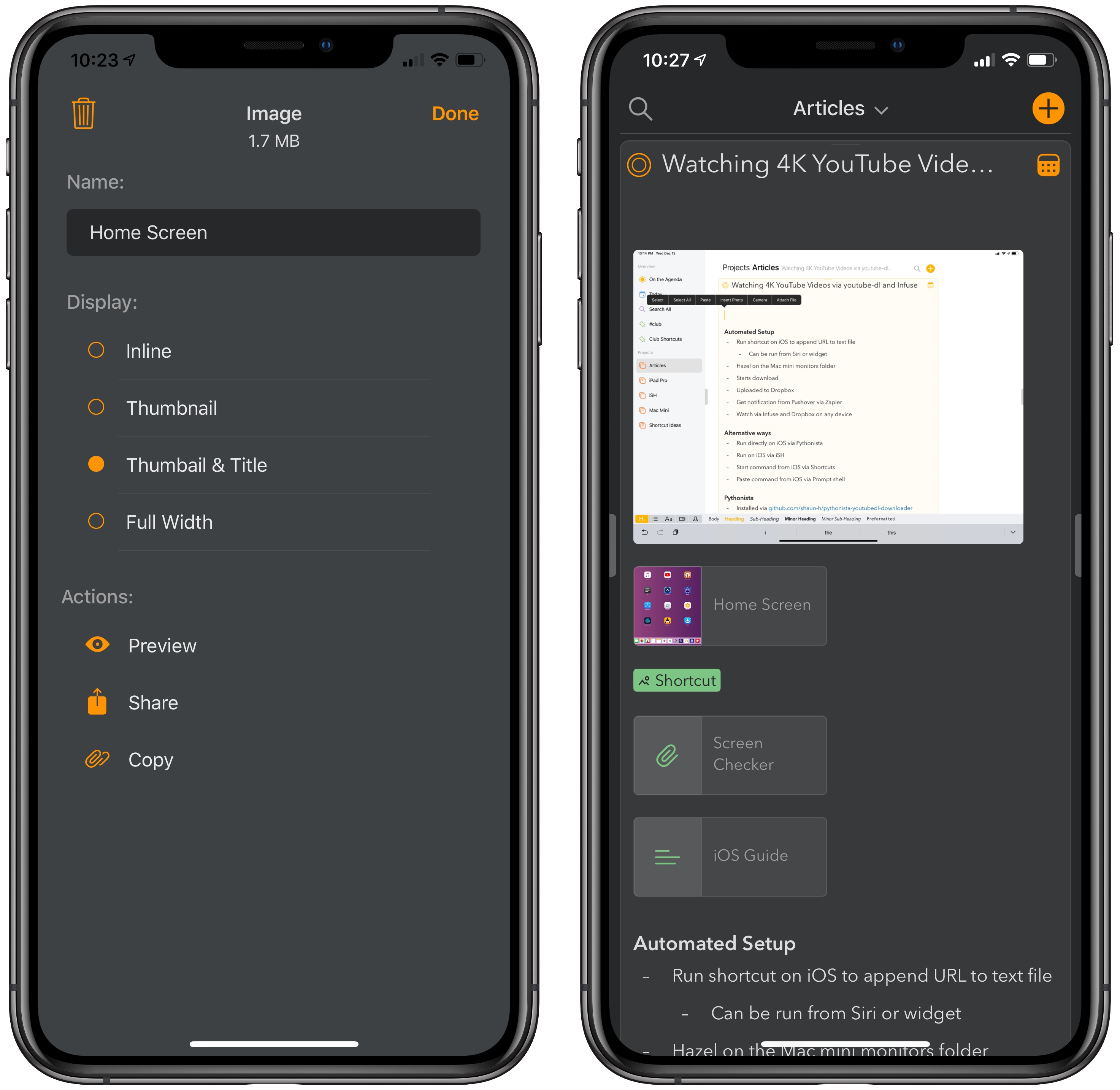 What I like about this approach is that Agenda lets you apply styles on a per-attachment basis: unlike Apple Notes, which has global options for small and large images that are also applied to all links and documents in a note, in Agenda 4.0 you can choose to view certain attachments as full-width, keeping others as small thumbnails or links within the same note. Thumbnails can be rearranged inside a note with drag and drop too.

In my tests with the new version of the app, besides helping the app grow beyond plain text, these options enabled me to format notes exactly how I wanted them. For instance, I like to keep certain “hero” images as full width, leaving everything else as a thumbnail that doesn’t occupy much vertical space. My only complaint is that inline attachments aren’t included in the body of a document when exporting to rich text or printing to PDF, which is something I hope the Agenda developers will be able to implement in a future update.

Also new in this release is expanded support for URL scheme automation, which now lets users create notes with attachments or append attachments to existing notes in the app.

As detailed by the developers here, the Agenda URL scheme’s create-note and append-to-note commands now support filename and attachment parameters to pass an attachment to a note identified by title. Like other note-taking apps for iOS that added similar features in the past, the attachment has to be passed via URL scheme as a base64 string, which can be easily generated with Shortcuts’ native ‘Base64 Encode’ action. 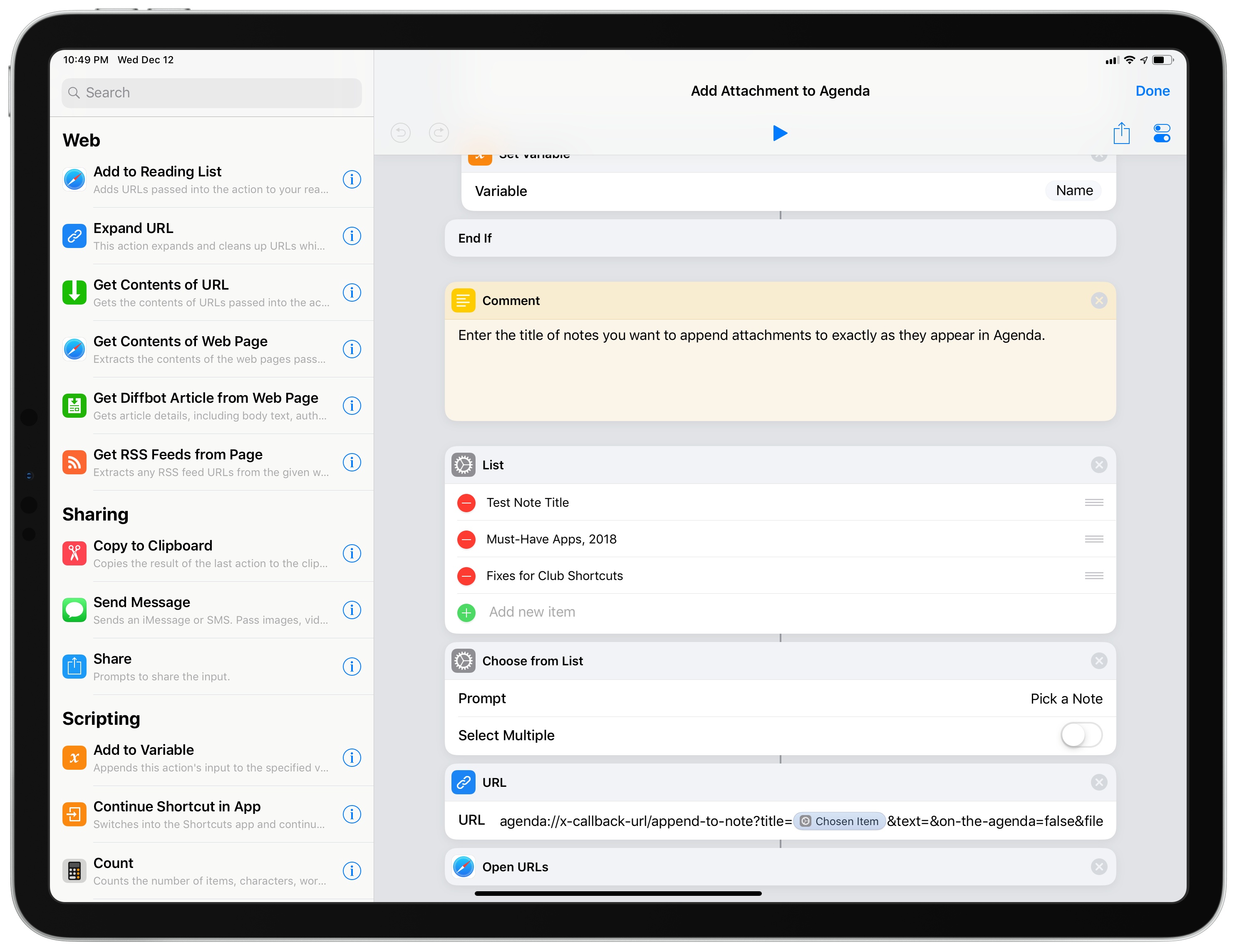 To give you an example of the more advanced automation supported by Agenda, I put together a custom shortcut that lets you add an image or document to an existing note chosen from a list of items. After picking the note you want to add an attachment to, the shortcut will let you pick either an image from the Photos app or a document from Files; the attachment will then be encoded on the fly and passed to Agenda, which will launch and update the selected note with the new file. 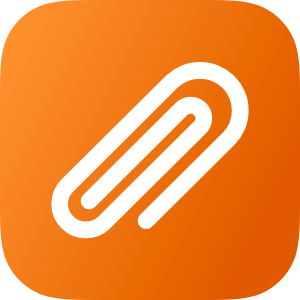 Append attachments to existing notes in the Agenda app. The shortcuts supports both images and documents from Files, and it can be executed from the share sheet (for input files) or the Shortcuts app.

Agenda is one of the most impressive app debuts of 2018: in less than a year, the developers at Momenta B.V. were able to ship a fresh take on the note-taking genre with an elegant product that combines elements of task managers and calendars, rethinking them for an app unlike anything else on the App Store. Version 4.0 helps Agenda become a viable alternative to Notes and Bear, and I highly recommend checking it out if you were turned off by its text-only nature before. Agenda 4.0 is available on the App Store both for Mac and iOS.