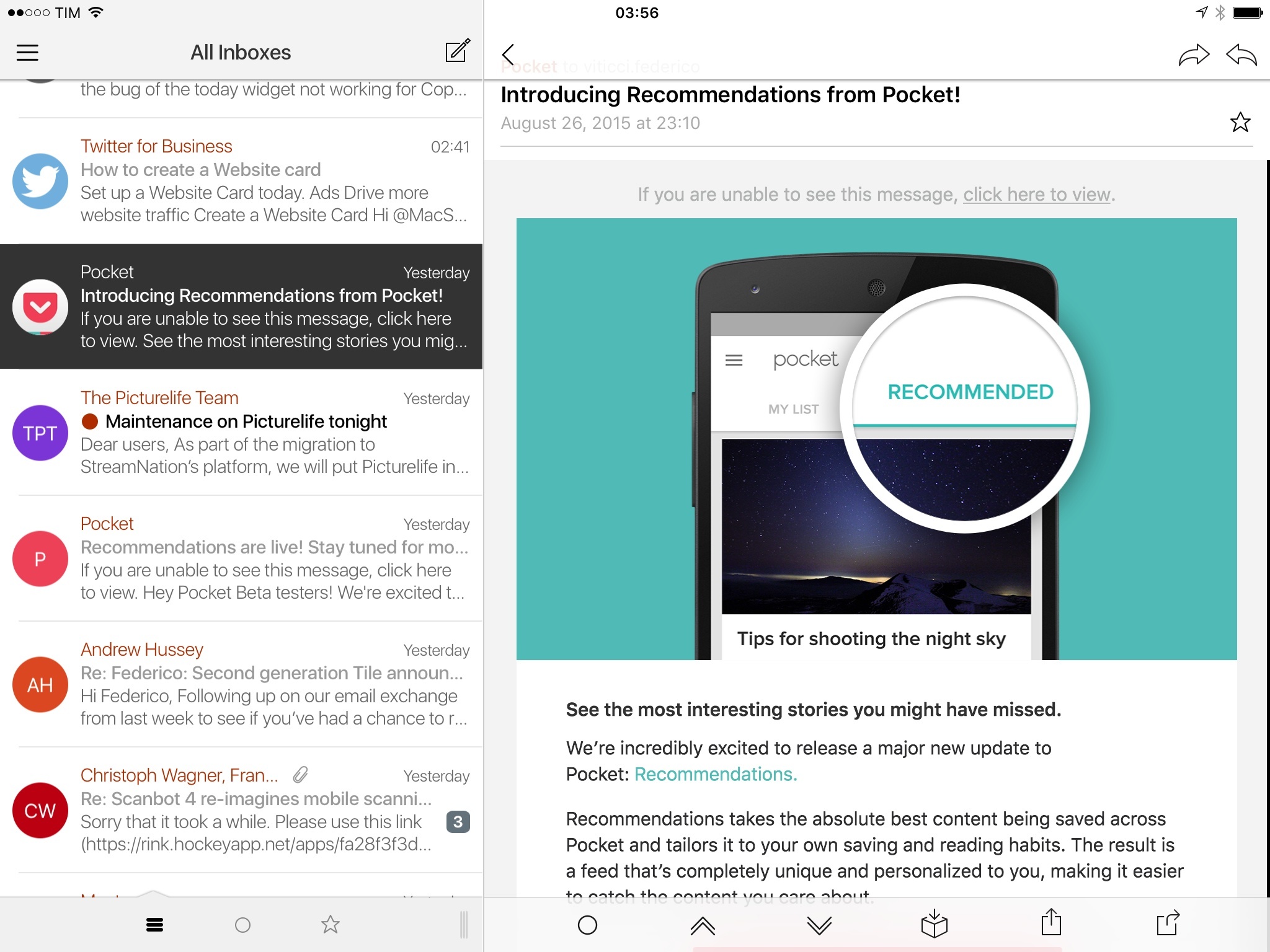 Dispatch has long been one of the most powerful email clients for iPhone. Originally released by Clean Shaven Apps in 2013, Dispatch took a unique approach at managing email by relying on integrations with third-party apps, online services, and text snippets. In a pre-extensibility world, Dispatch was the only email client for iOS that could work alongside your todo or calendar app of choice, turning messages into actionable items that could talk to other apps on your device.

As more and more “modern” email clients started using proprietary server-side features for smart processing and limited external integrations, Dispatch augmented email on iPhone with the power of third-party apps. Even after iOS 8 and extensions, the team at Clean Shaven Apps didn’t lose its focus: in addition to custom integrations, Dispatch was quickly updated to support the native share sheet so you’d have the best of both worlds.

Dispatch for iPhone had app integrations, advanced reply options, and little touches that made it a superior option for power users who wanted more than Apple Mail. With one major caveat: Dispatch didn’t have an iPad app.

This is changing today with version 3.0 of Dispatch, released on the App Store as a Universal update that adds a proper iPad counterpart designed to take advantage of the bigger screen for even faster email management and triaging.

END_OF_DOCUMENT_TOKEN_TO_BE_REPLACED 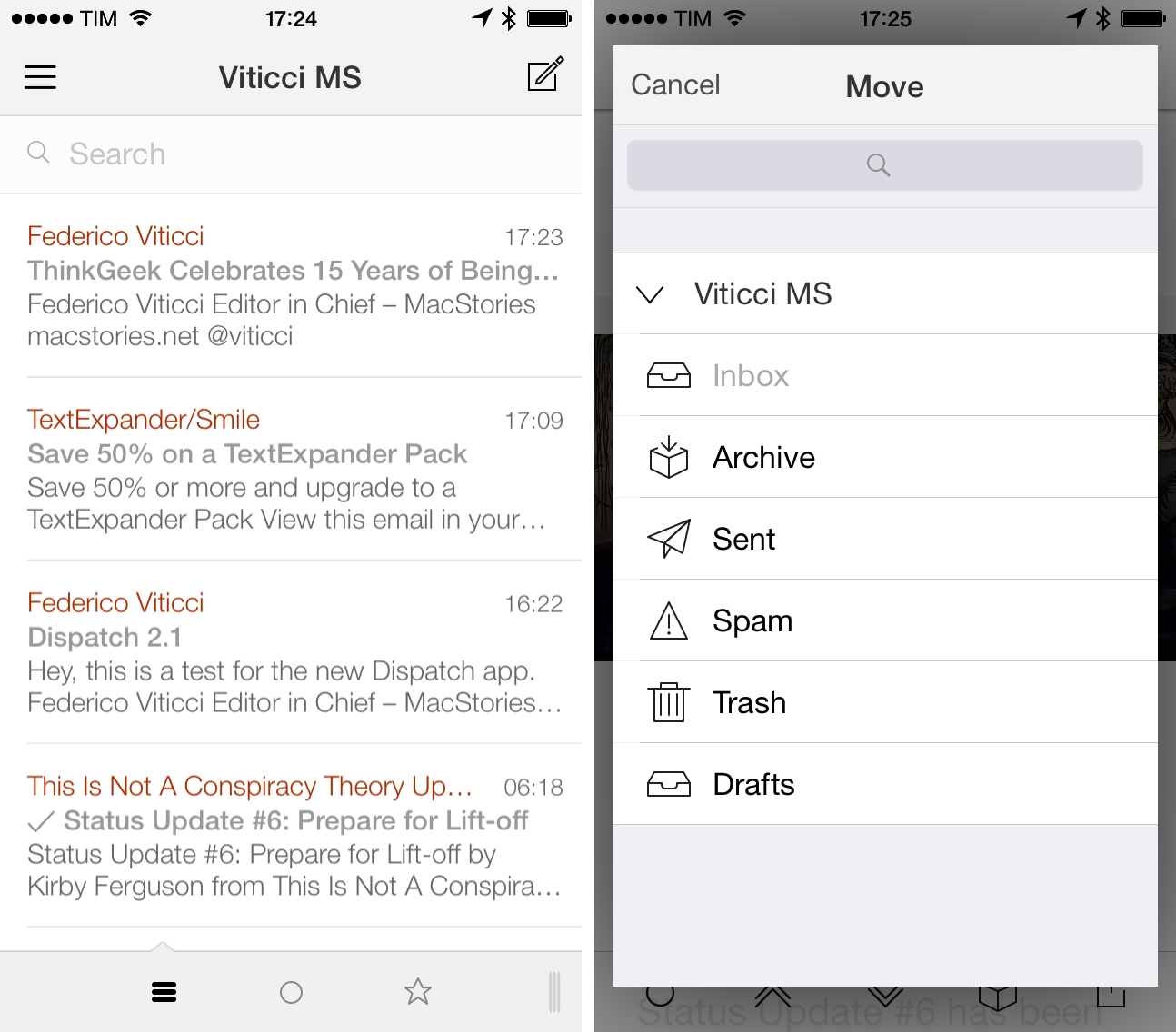 Dispatch, the powerful email client for iPhone with actions, snippets, and other handy shortcuts that I’ve covered on multiple occasions here at MacStories, has been updated today to version 2.1, which brings welcome improvements to mailbox navigation and message management, as well as more app integrations with the ability to export emails to PDF.

END_OF_DOCUMENT_TOKEN_TO_BE_REPLACED 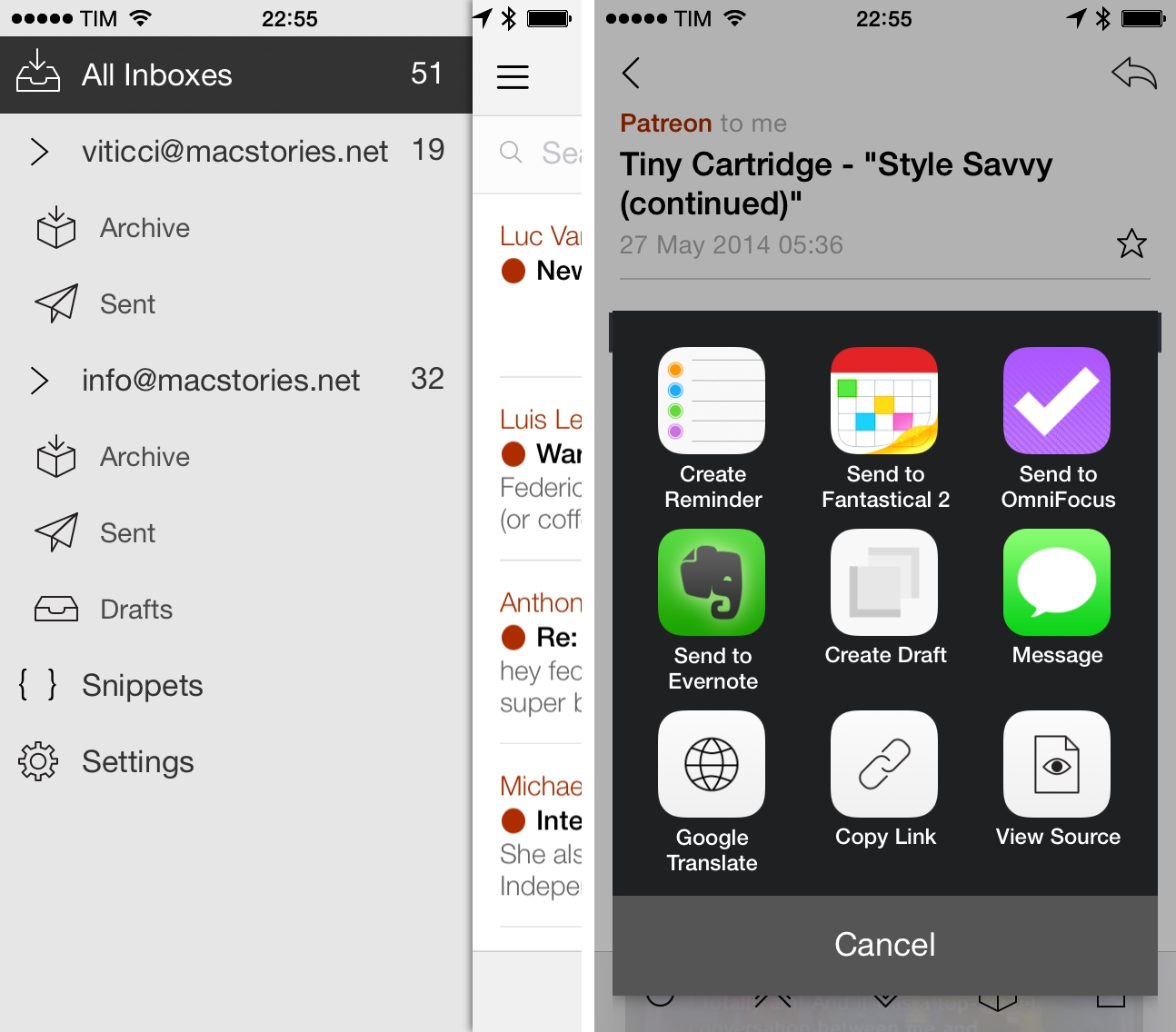 Dispatch, an email client with support for actions and snippets that I first reviewed in June 2013 and followed for the past year, has been updated today to version 2.0, which brings a refreshed interface and welcome improvements to navigation. I stopped using Dispatch (replacing it with Boxer) when I realized that I needed to be able to browse my folders and have fast search across my mailboxes, but I’m going to put version 2.0 back on my Home screen thanks to today’s changes.

END_OF_DOCUMENT_TOKEN_TO_BE_REPLACED 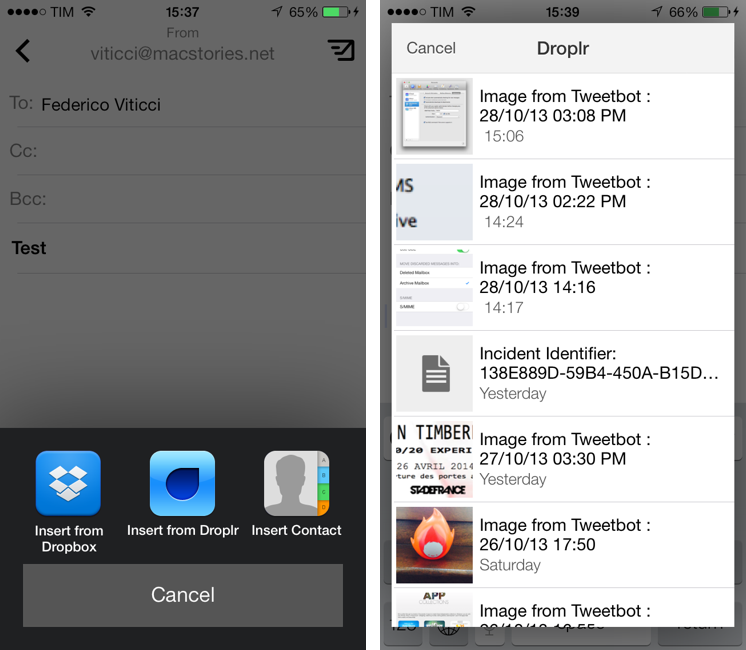 Dispatch is my favorite third-party email client for the iPhone. Released in June, Dispatch stood out from similar apps as it implemented a powerful feature set that took advantage of native iOS apps to bring inter-app communication and snippets to mobile email. In September, the app was updated with iOS 7 background fetch, message search, and a change to individual message links that allowed iOS apps to open specific messages directly in Dispatch. Thanks other several minor features and details (such as custom salutations and link actions), Dispatch became a fantastic alternative to Apple’s Mail app for users who wanted more out of their iPhone email client.

With today’s 1.3 update, Dispatch gets even more powerful and versatile with the addition of a unified inbox: a feature that I had been asking for since the first version of the app, unified inbox is a new top-level item in the app’s sidebar and it groups all, unread, and starred messages from all your configured accounts’ inboxes. From the All Inboxes view, you can manage and respond to messages as usual, but you can also search and compose a new message without switching to an individual account’s view. END_OF_DOCUMENT_TOKEN_TO_BE_REPLACED 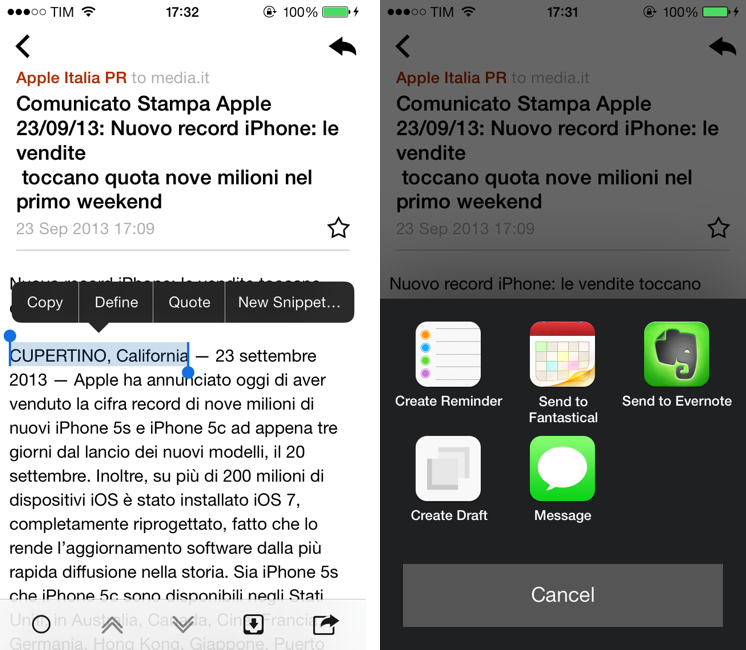 Dispatch, which I first reviewed in June, is an innovative email client for iPhone that eschews social features and push notifications for more power user-oriented functionalities such as default salutations, snippets, and built-in app actions. Here’s how I described message actions:

Dispatch has multiple sets of actions for message content and iOS data detectors – web links, dates and times, phone numbers and emails, and addresses can be tapped to bring up different actions. For third-party apps, Dispatch supports Due, OmniFocus, Things, Asana, Evernote, Drafts, Chrome, 1Password, Instapaper, and Google Maps; native iOS integrations include Messages, Maps, Reminders, Safari, Copy to Clipboard, Calendar, FaceTime, and Contacts. These actions are presented either by hitting the Share button in a message or by tapping a link or other bits of text that are recognized by iOS as, say, addresses or dates.

Being able to save a message to OmniFocus or directly into Evernote (preserving formatting) is incredibly handy, and I’m surprised that nobody else thought of this before. For years, I used Apple Mail and profoundly despised the round-tripping that it forced upon me to send text to other apps such as my task manager or text editor. Some email apps enable you to open links in other browsers, but Dispatch takes it to the next level with one-tap message sharing.

When I’m on my Mac, I can put together a Keyboard Maestro macro to archive a message for reference in Evernote, but when I’m on iOS, that’s a problem because there’s no native communication between Apple Mail and Evernote. The developers of Dispatch understand that people who work on iOS need to use multiple apps, and they’re trying to fix email’s inter-app communication problems with their own take on an email client.

I have been testing Dispatch 1.2, released last week alongside iOS 7, for a few months now, and I think it’s a good update that takes advantage of the new OS in interesting ways. END_OF_DOCUMENT_TOKEN_TO_BE_REPLACED 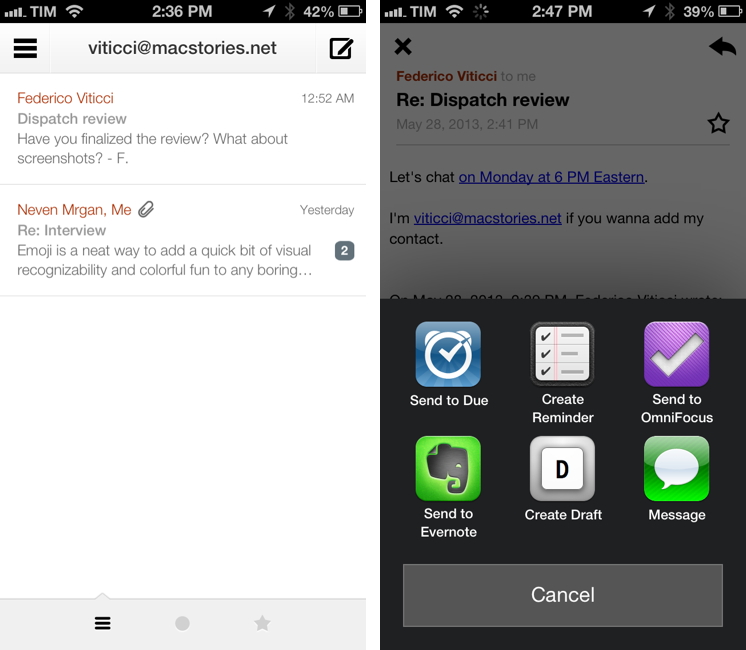 In April, I wrote about Triage, my new favorite email app for iPhone. Here’s how I concluded my review:

Triage is based on a simple, efficient, and rewarding process that works by leveraging the iPhone’s most obvious gesture and one-handed operability. Unlike other new email apps, Triage doesn’t let you scan your inbox to turn messages into to-dos: it uses a one-message-at-a-time approach to see what’s up, what needs attention, and what can be kept for later.

Dispatch, made by Muh Hon Cheng and Lin Junjie, is a new email client for iPhone that’s aimed at the later part. I have been using every day it for the past two months, and it’s now on my Home screen alongside Gmail and Triage.

As I explained in the past here on MacStories, my iOS email workflow was perfectly fine until Sparrow showed interesting new ways to interact with messages on the iPhone. Sparrow got acquired by Google, which, a few months later, came out with a completely revamped Gmail app that is now my primary client for searching and composing longer messages on the iPhone and iPad[1]. I don’t like how Google’s app relies on web views across several areas of the interface; in spite of Google’s additions, Gmail doesn’t make for a great experience to archive or delete emails with a one-handed operation. That’s what Triage is for.

At this point, I have two wishes left ungranted from email on iOS: a fully native Gmail app and a client with inter-app communication. Dispatch wants to be the second one. END_OF_DOCUMENT_TOKEN_TO_BE_REPLACED

In the past months we covered some interesting alternatives to VLC for Mac, like Movist and Mplayer OS X Extended, which sported really interesting features and playback support for almost every format out there.

Today I’d like to talk about another similar app, found on Google Code once again, which is an evolution of Mplayer OS X Extended: meet MplayerX.

END_OF_DOCUMENT_TOKEN_TO_BE_REPLACED 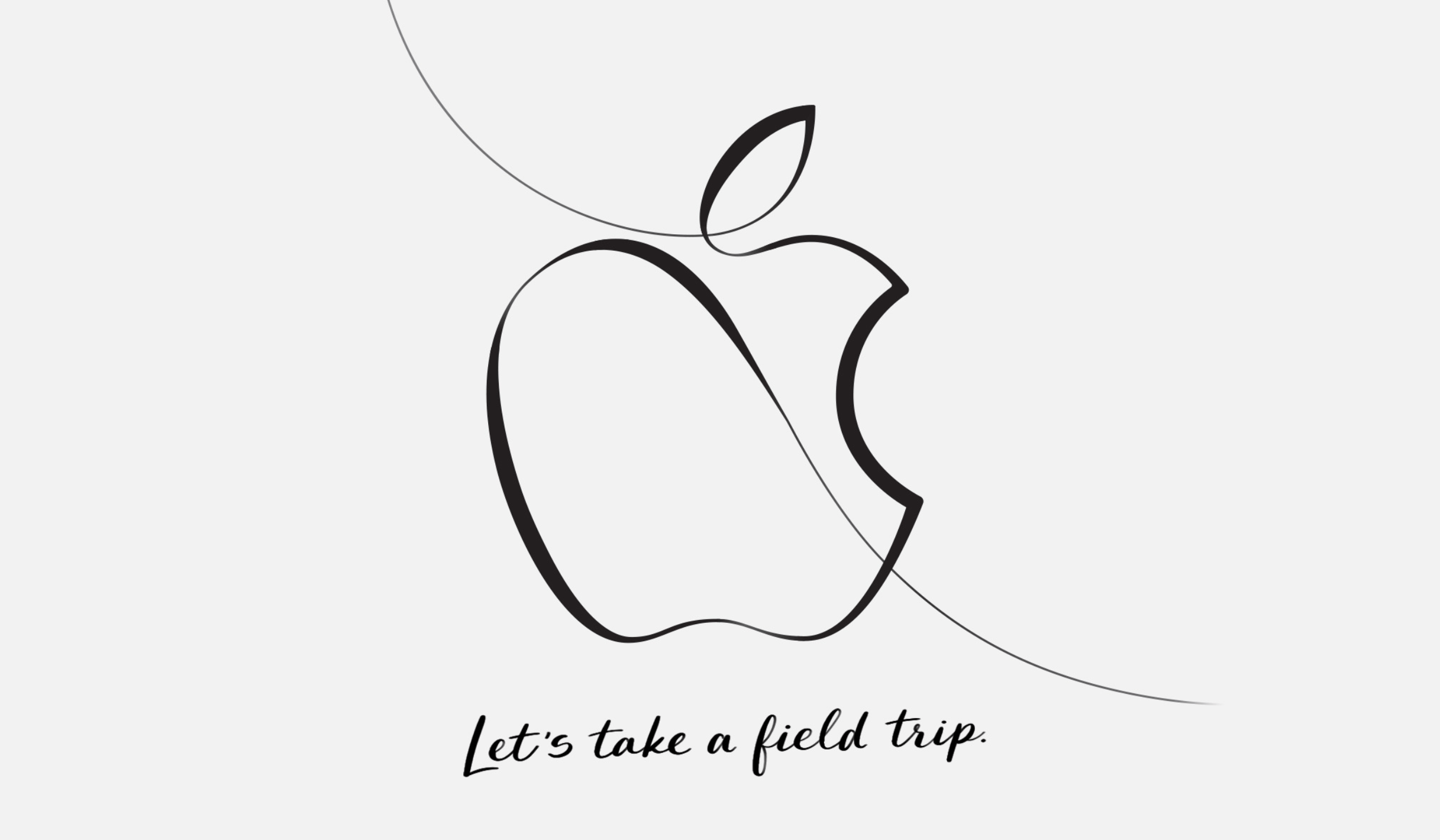 Next Tuesday, Apple will take the stage at Lane Tech College Prep High School in Chicago to announce ‘creative new ideas for teachers and students.’ As any Apple event approaches, it’s natural to speculate about what products might be announced. After all, that’s what usually happens at an Apple event.

However, there’s a forest getting lost for the trees in all the talk about new hardware and apps. Sure, those will be part of the reveal, but Apple has already signaled that this event is different by telling the world it’s about education and holding it in Chicago. It’s part of a broader narrative that’s seen a shift in Apple’s education strategy that can be traced back to WWDC 2016. Consequently, to understand where Apple may be headed in the education market, it’s necessary to look to the past.

END_OF_DOCUMENT_TOKEN_TO_BE_REPLACED

Every year, thousands of iOS and macOS app deals are launched for Black Friday and Cyber Monday. At MacStories, we handpick the best deals for iOS and Mac apps and collect them in a single roundup with links to buy or share discounted products directly. You don’t have to be overwhelmed by app deals; we take care of finding the best ones for you.

This year, in addition to app deals, we’re expanding our Amazon coverage with deals on accessories that work with Alexa, HomeKit devices, 4K TVs (great for modern gaming and the latest Apple TV), and more. You can find hardware deals (with links to Amazon.com) at the end of the list.

Bookmark this post and come back to find updated deals starting today through Monday. Updates will be listed as new entries at the top of each section; iOS apps are organized in sub-categories for easier navigation.

For real-time updates, you can find us as @MacStoriesDeals on Twitter.