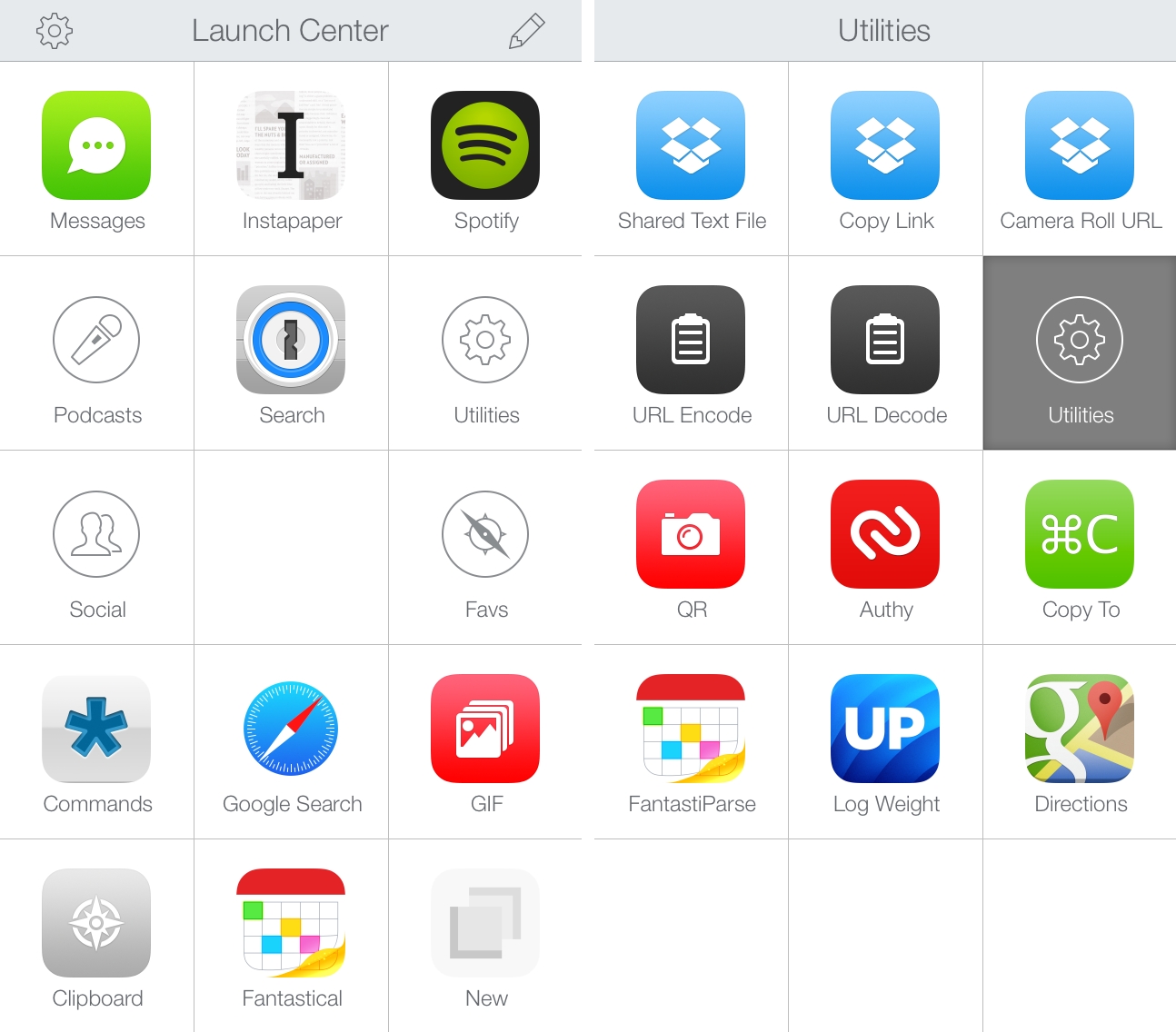 In version 2.3, Contrast added the ability to nest multiple input tags without taking care of manual encoding. In practice, that meant that Launch Center Pro 2.3 supported keyboard prompts inside lists or multiple nested lists, but there was still an encoding aspect to consider when chaining multiple URL schemes and connecting apps together.

In version 2.3.1, Launch Center Pro’s URL engine has undergone a massive change to enable users to write workflows logically without having to constantly worry about encoding URLs and debugging them.

In the new version of the app, input tags (clipboard, prompt, list, etc) are always encoded automatically according to their context within a URL. Launch Center Pro does its best to determine whether a prompt should be encoded or left as an unencoded string of text; for this reason, manually encoding tags is no longer necessary and the concept of explicitly encoded and unencoded tags has been deprecated. From a workflow-building standpoint, this means that you’ll be able to remove (almost) all of those square and curly brackets that you used in your URLs and callbacks.

In simpler terms, Launch Center Pro now knows how to deal with basic URLs and the ones nested inside x-callback-url. It doesn’t require “management” for input tags and the URL schemes it uses are presented in a much cleaner fashion with less cruft.

As an example, here’s an action to search for a GIF and copy its link in the clipboard (download). Notice how the GIF tag and keyboard prompt are nested without artifacts or manual encoding – they’re simply inserted in the action in a way that makes sense.

One of my favorite actions is a one-tap shortcut to open a link I have copied in the clipboard in Safari. Previously, I had to tell readers that they needed to use [[clipboard]] to encode the clipboard and open it, even though that didn’t make much sense from a visual perspective. Why the double brackets?

Here’s one of my most-used actions: a 1Password palette for common logins (iCloud, Dropbox, etc) that includes a keyboard fallback at the bottom to manually type the login’s name. 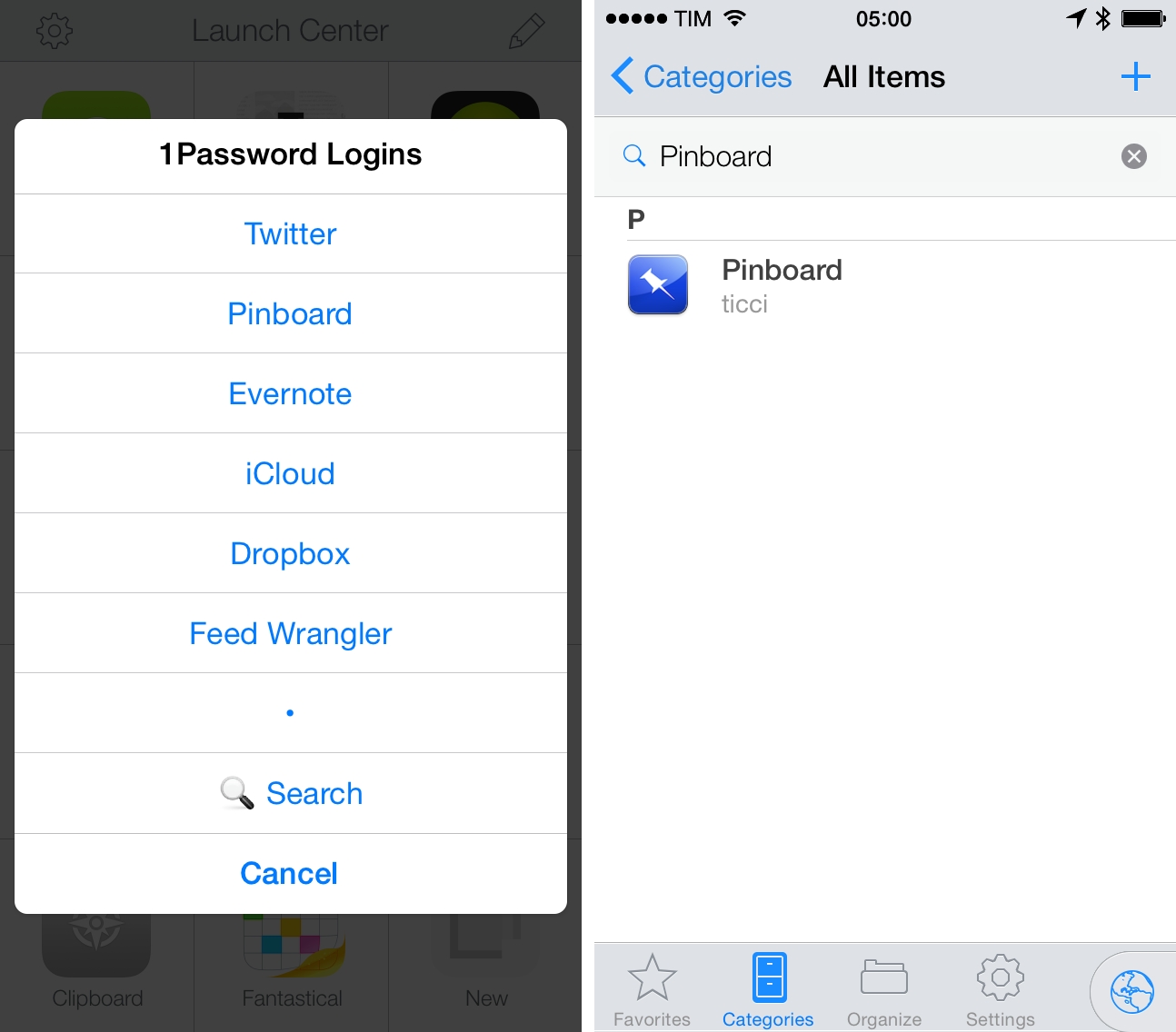 I use this every day and you can download it here.

A cleaner syntax that abstracts encoding from building actions helps when you’re trying to create a workflow that comprises multiple steps. Here’s the new version (download) of an action to pick a photo from your Camera Roll, upload it to Dropbox, share it, get its direct link, and open the system share sheet for its link.

You’ll notice that curly brackets are still present in Launch Center Pro – after all, you’ll still need to properly encode your static text, such as my folder path and URL scheme in the example above.

The fact that you no longer need to care about encoding input tags and double or triple-encoding URL callbacks is a big win for Launch Center Pro users, and a change that we’ll explore in-depth in the update to our guide.

However, for power users who want control over encoding of input tags in their actions, Contrast has added encoding operators for adjustment and timing. These are advanced features that most people won’t (hopefully) need, but, once mastered, they can contribute to the creation of incredibly complex actions.

On the Launch Center Pro support website, Contrast has documented operators (essentially, special characters) to increase and decrease encoding, set it to zero, skip an input tag, or force the expansion of a tag right away. There are plenty of examples in the documentation but I haven’t personally found a need for these operators in many of my actions – and I believe this is good news.

I don’t need to chain four or five apps together these days, and Launch Center Pro now takes care of URL encoding automatically without having to control it manually. It’s good that there is an option though – advanced workflows (such as this one) are also cleaner and more understandable because of encoding operators.

There are some cool additions to keyboard prompts in Launch Center Pro 2.3.1 that make text-based actions even faster and easier to use. You can now specify default text for your prompts, which will pre-populate a keyboard prompt as soon as it appears on screen. You can guess how this also means that you can pre-fill a prompt with a [clipboard] tag, which will let you combine the speed of clipboard expansion with the confirmation step of the classic prompt.

Here’s an example. In Launch Center Pro 2.3, I set up an IFTTT action to send text to a GroupMe chat. That text was often something that I had copied in the clipboard, but without default text I still needed to tap & hold inside the prompt and hit Paste. No more:

Notice how the prompt has a name and default text. In this way, the prompt appears with my clipboard already in it, and I just need to confirm with the Launch button.

But if I wanted to, Launch Center Pro 2.3.1 would allow me to also set the cursor position manually in the same action. Using a new \| shortcut, you can now set the keyboard cursor to appear anywhere in your actions, like this:

Combined with the possibility to set custom delimiters for the [prompt-list] tag, keyboard prompts in Launch Center Pro 2.3.1 have been enhanced with the kind of additions that, again, will make power users happier (and less reliant on snippets or other hacks).

In 2.3.1, you can bookmark your favorite GIFs and access them from a dedicated interface using the [gif-bookmarks] tag anywhere in your actions. Here’s an example of an action (download) to view your bookmarked GIFs and copy a link to a selected one in the system clipboard:

GIF bookmarks are backed up alongside your action library if you connect Launch Center Pro to Dropbox, and the tag can be easily integrated with any existing action where you’d like to have a direct link to a GIF on Giphy.

Launch Center Pro 2.3.1 may seem like a small update, but power users of the app will be able to dramatically simplify and improve their complex actions and workflows thanks to the encoding changes and tweaked input tags.

I will probably dedicated a few hours this weekend to playing around with advanced workflows again while waiting for Alex to finish the update to our guide he’s been working on. You can get version 2.3.1 of Launch Center Pro for iPhone and iPad on the App Store.