My friend Bradley Chambers recently posted a series of tips on how to free up space on iOS:

In 2014, 16 GB is becoming less and less manageable. Apps are getting bigger, we are consuming more media, and we are taking more photos. Time and time again, I’ve gotten calls and emails asking how to free up space on an iOS device. This is often a complex question. I want to run through some ways that you can deal with this issue if your phone gives you the dreaded out of space alert when you go to take a photo.

Bradley runs through a series of common steps to delete apps and data you no longer need on your device, and I highly recommend reading his post as he covers the basics very well.

I thought I’d also share some of the techniques I rely on to keep available storage on my 16 GB iPhone.

CameraSync handles automatic Dropbox uploads. I don’t keep photos on my device. As soon as I get home, CameraSync’s location trigger will start uploading photos to a specific Dropbox folder. When I get a CameraSync notification, I launch the app so I know it won’t be closed in the background; after the upload is complete, I delete photos manually. As Bradley argues, this kind of apps will get a lot better in iOS 8 thanks to deeper Photos integration.

Clear Safari data. I use Safari a lot, which means that the browser’s cache and other stored data tend to grow quickly. Once a month, I go to Settings > Safari and tap Clear Cookies and Data. I’ll need to log into websites again, but iCloud Keychain makes that easier and I’ll have a few hundred megabytes of storage back.

Image Capture handles videos. HD videos recorded on an iPhone can take hours to upload on my slow WiFi connection, and I certainly don’t want to consume mobile data for them. Therefore, Image Capture for OS X (a built-in Apple app) is still my best friend when it comes to saving videos on my Mac and then moving them to an external drive.

Remember downloaded files. Many iOS apps that work with cloud services let you pick files to download for offline usage. For me, that’s usually Dropbox-enabled apps, and especially Boxie, which has a dedicated Offline Items section. It’s easy for me to forget about the files I save offline for future reference, which is why, every couple of weeks, I open Boxie and remove items I no longer need.

Check downloaded podcast episodes. I also tend to forget about episodes downloaded by my podcast client of choice, which is an interesting consequence of background downloads introduced by iOS 7. Every weekend, I try to remember to check episodes that were automatically downloaded and delete the ones I know I won’t listen to.

Delete app walkthroughs and guides. I’ve come across several apps that include first-run walkthroughs and tutorials as video files or PDFs. I don’t need these files, so I always make sure to remove them – even if they’re not huge, they can add up across multiple apps.

Backup apps and attachments with DiskAid. I don’t know how an app like DiskAid is possible, but it works amazingly well and I use it regularly. DiskAid lets you backup specific items from an iOS device such as Messages threads or just the attachments from a conversation. Until iOS 8, exporting all photo and video attachments to your computer is a good solution to reclaim space without losing media a friend shared with you. And DiskAid can do the same for Voice Memos, call logs, notes, and other native iOS apps.

What’s even more impressive is the App Backup feature that was recently added to the app. DiskAid can backup individual apps and their data to your Mac as .ipa files that you can reinstall at any time without ever using iTunes. This seemed too good to be true the first time I heard of it, but it actually works, and it’s a great way to delete games (which tend to consume a lot of storage) and restore them with your progress intact. 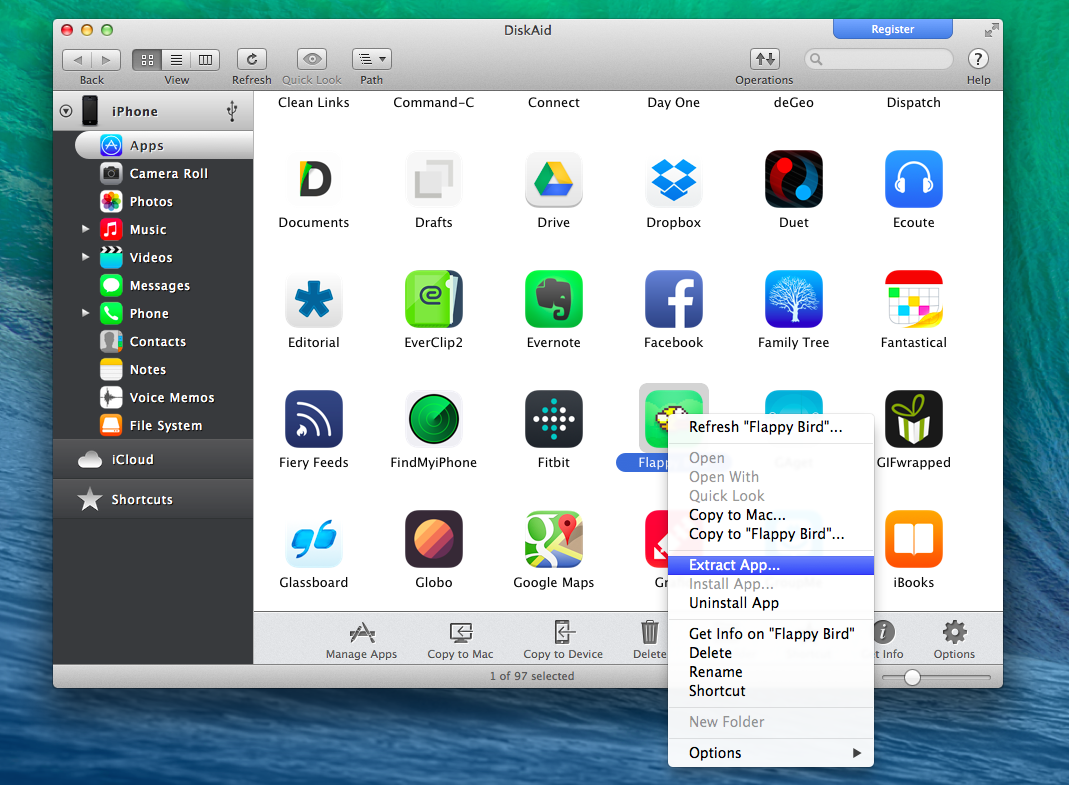 In DiskAid, the Extract App menu will let you export an app to your Mac, asking you to copy just the app or the app with its data; then, you can delete the app from your iOS device. When you’ll want to reinstall it, simply use the Install App feature on DiskAid, grab the app file, and choose to restore the app with its data. I tested this with some games on my iPhone, and it worked as advertised: I freed up space by deleting the games, and then I restored them along with the levels and high scores I had in each game.

Combined with the ability to export data from Apple’s apps, DiskAid’s App Backup feature is a great way to backup and restore specific apps and their data, and I wish that something like this was available by default on iOS to all apps, whether they support iCloud or not.