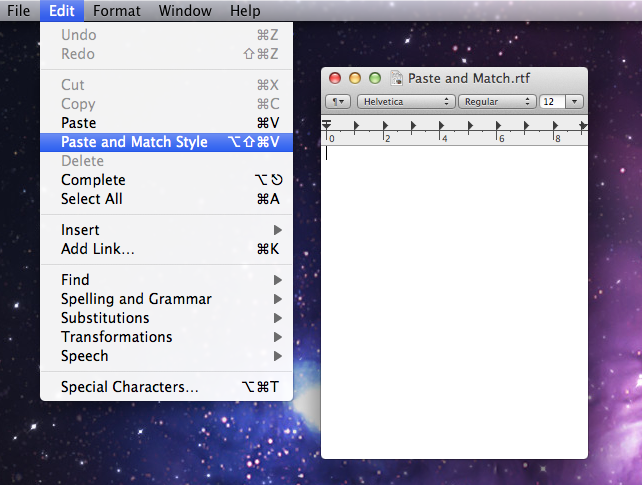 On the Mac, the paste function associated with the CMD + V keyboard shortcut has a well-known side effect: if you’re writing a document and you paste something from your clipboard, the document’s style won’t be automatically matched. Quite possibly a “feature” per Apple’s design choice, since I switched to the Mac I’ve always been annoyed by such “remember every style” behavior, and from the reaction I’ve seen on Twitter, it turns out quite a few people dislike when they end up with weird styles in their outlines or email messages as well.

But, you might argue, there is a way to paste and match style, and that’s represented by the ⌥⇧⌘V shortcut…which requires four fingers to execute, and it’s not always implemented in the same way in third party apps. Chrome, for instance, uses ⇧⌘V, and many other apps follow a similar trend to modify the default shortcut for Paste and Match Style.

In the past few days, I’ve come across some interesting solutions to unify Paste and Match Style with a simpler keyboard shortcut, and make it the default paste action on OS X if you never want to paste with “styles”. This can be particularly handy for writers, who often prefer a plain text environment or a styled one that’s, however, consistent throughout a document.

The first option you have is to install this AppleScript by Don Southard, assign it a keyboard shortcut with FastScripts, Alfred, or any other launcher of your choice, and use it as a system-wide replacement for Paste and Match Style, with its own shortcut that will work everywhere no matter how apps implement the function differently. Don describes it as “one paste and match style to rule them all” and, essentially, that’s true: the script does its own native style matching that works with any app that can accept .txt input. To set up the script, head over here and copy it, paste it inside AppleScript Editor, and save it as a script. With Alfred (or another app), give it a keyboard shortcut to use whenever you want. Mine is ^⌘V, and it works as expected in my Sparrow messages, Evernote documents, OmniFocus, Chrome – anywhere I want to paste and match style without remembering the system’s shortcut. 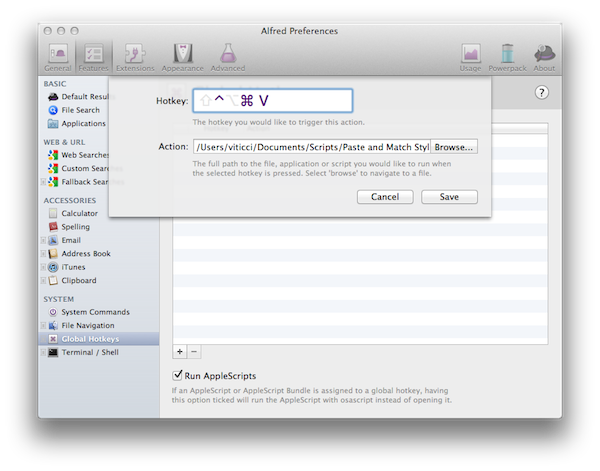 Alternatively, you can modify the default OS X keyboard settings to change the keys assigned to “Paste” as the ones used for “Paste and Match Style” (hat tip @PenLlawen). Mac OS X allows you, in fact, to take an item from an application’s menu (the one up in the menubar), and give it a specific keyboard shortcut. To do so, you have to copy the exact name of the item as you see it in the menubar, and give it a new shortcut in System Preferences -> Keyboard -> Keyboard Shortcuts -> Application Shortcuts for “All Applications”. Whereas third-party apps may change the default shortcut for Paste and Match Style, they usually don’t alter this action’s name, so assigning a new keyboard combination to “Paste and Match Style” (as seen below) should work. 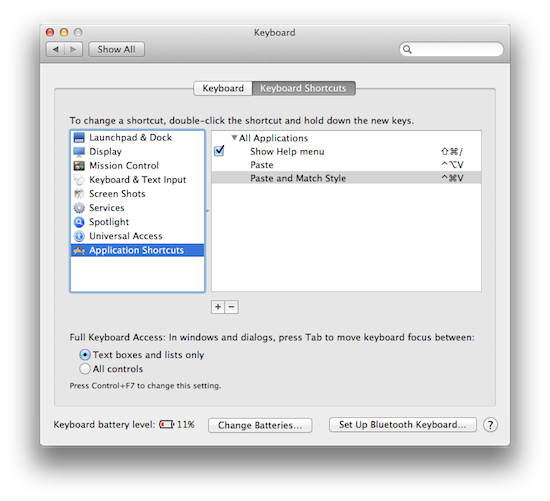 In the screenshot above, I’ve changed the default keyboard shortcuts for Paste and Match Style. The obvious problem with this method, as I mentioned above, is that apps usually keep the name set by Apple. Others, like Evernote, don’t. And with these apps, changing the default shortcut for the top menu item won’t work, so you’ll be forced to learn their “special” shortcuts again.

Customizing your Mac’s built-in Paste and Match Style command might get a little tricky if you work with lots of different third party apps, and for this reason I highly recommend the script by Don Southard, which allows me to reliably and quickly paste text without formatting in any app. If you have additional tips or apps to recommend for Paste and Match Style, meet us in the comments below.